The biggest viral stories this year include video games, calling out influencer privilege, an overnight TikTok star who made cranberry juice and Fleetwood Mac popular (again), a fashion trend inspired by rural life and domesticity, and plenty of lessons for brands… 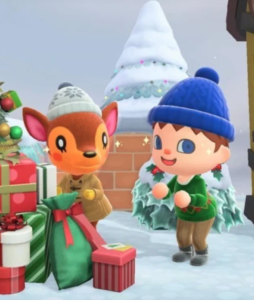 Animal Crossing and Among Us Were the Games of Quarantine

Throughout the pandemic, young consumers have turned to gaming to both escape boredom and stay connected with their friends. YPulse’s Gaming report found that 94% of 13-39-year-olds play video games in some capacity, and gaming frequency increased significantly this year. While gaming boomed across the board, some titles got so super-popular they became 2020 icons. When Nintendo launched Animal Crossing: New Horizons in March, it instantly became a hit—and it’s been Switch’s most successful game release to this date. It sold 1.88 million copies in its first three days and during its latest quarter, it sold more than 10 million copies—bringing the total to more than 22 million. The game also helped fuel the popularity of the consoles, which were sold out everywhere. In August, Nintendo reported that their profits increased by 427.7% from April to June and that their year-on-year sales increased by 108.1%, while their net profit was up 541.3%. They also revealed that for all new Switch consoles purchased and played for the first time this quarter, more than half played New Horizons on the first day. Throughout the pandemic, many players have been using the game as a way to connect with their friends and family by hosting virtual weddings, graduation ceremonies, and other milestones they’re missing out on in-person. Brands have also been using it to their advantage by marketing products from fashion lines to skincare in the game. But Animal Crossing wasn’t the only viral gaming hit of 2020: two-year-old indie multiplayer game Among Us saw a resurgence in popularity in lockdowns—all thanks to a slew of gamers that include Sodapoppin, Shroud, Ninja, and Pewdiepie. Rep. Alexandra Ocasio-Cortez (better known as AOC) pushed the game further into virality by hosting the most-viewed stream ever on Twitch where she educated viewers on voting and the election. These games—and others that allow young consumers to connect with friends virtually—will continue to be vital to reaching Gen Z and Millennials. 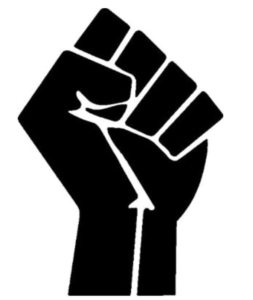 George Floyd’s shooting at the end of May was one of the turning point events of 2020—and it sparked the turnout of millions of young protesters supporting the Black Lives Matter movement—both in the streets, and online. Our Views on America report found that 68% of 13-39-year-olds have participated in protests or spreading awareness. TikTok transformed from a platform for lighthearted dances into a full-fledged space for protesting and expressing their opinions. At the end of May, users started the #ImBlackMovement in which they called TikTok out for allegedly censoring Black creators. Then, young protestors urged brands and influencers to pay attention and become more involved: YPulse found that 69% of 16-34-year-olds think brands should be involved in the movement. Many celebrities and brands from Nike to Ben & Jerry’s stood in solidarity with the movement. But not all “support” was embraced. In the same month, several brands faced a reckoning that forced them to reflect on how inclusive their companies really are as well as others apologized for past missteps. But 2020 has shown that how brands show solidarity is especially important. Young consumers made it clear the bar for social justice participation has been raised, and called out brands to say that empty statements of support are no longer enough—real action is needed. YPulse’s Not Waiting for the World to Change trend research explored this in depth, and found 78% of young consumers like when brands share the ways that they are supporting a specific cause or issue in detail. Black Lives Matter began in 2014, but 2020 was the year where it became more than just a “moment” for many younger consumers—but rather a “movement.” And the viral stories surrounding that movement were an enormous lesson for brands on what social good needs to look like going forward. 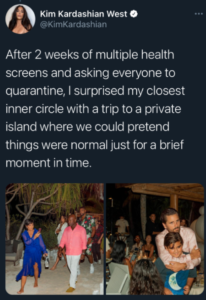 Influencers & Celebs Faced Backlash for A Lot of Things This Year

Just like young consumers aren’t afraid to call out brands, they’re not scared to call out influencers for their missteps either—and in 2020, there was no shortage of influencer backlash. During the start of the outbreak, Naomi Davis, Ali Maffuci, and Something Navy’s Arielle Charnas fled their cities for smaller towns—and faced a slew of criticism. Many social media users and followers called them out for using their wealth and privilege to relocate to rural areas and obtain tests for the virus, which has been difficult for many people in the country to do. But that wasn’t the end of influencer COVID misbehavior. Over the summer, YouTuber Jake Paul and several TikTok stars from Hype House were caught throwing parties in LA. It got so bad that the mayor himself had to get involved and cut power in one of the houses. YouTuber Tyler Oakley wasn’t having any of it and didn’t shy away from calling out fellow creators for their actions. Meanwhile, Kim Kardashian West was criticized (and turned into a meme) after flaunting how she “rented” a private island for her loved ones to celebrate her 40th birthday. Not even TikTok’s biggest star Charli D’Amelio could avoid the backlash: She temporarily lost over a million followers after her and her sister Dixie were criticized for being rude to their personal chef on a YouTube video. The pandemic definitely changed influencer culture and amplified cancel culture, and has made young fans far less tolerant of displays of privilege (as we predicted) and the intolerance for displays of wealth and insensitivity. But these pushbacks don’t mean the end of influencers’ careers—often they’re back in the spotlight after an apology and acknowledgement of wrongdoing. After all, the week of her “cancellation” D’Amelio became the first TikToker to hit 100 million followers—and the pandemic certainly couldn’t kill influencer marketing. 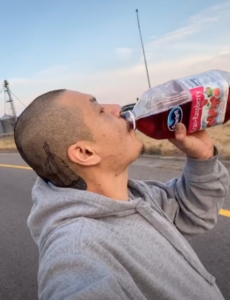 When Nathan Apodaca (known as @420doggface208 on TikTok) uploaded a simple video of himself skateboarding while drinking a bottle of OceanSpray cranberry juice and gliding to the tune of Fleetwood Mac’s “Dreams,” it took the internet by storm. The video currently has 76.1 million views. Users on social media discovered that Apodaca was living out of an RV without running water so they started donating money to him via PayPal, Cash App, and Venmo raising up to $10,000. But it doesn’t end there: The clip led to the ‘70s hit song going back to the top of the music charts, Fleetwood Mac member Mick Fleetwood responding to the clip with his own rendition of the original video, and OceanSpray’s CEO Tom Hayes who not only posted his own version, but teamed up with Nissan to gift Apodaca a new truck and a trunk full of their cranberry juice. The scenario also highlighted another popular musical trend among young consumers: their newfound love for older, classic music. During a tough year, young consumers have been drawn to feel good and “pure content,” and Apodaca’s story certainly is inspiring. Despite being financially impacted by the pandemic, many young people have still been donating to friends, family, and those who are being affected—and OceanSpray’s quick response shows how they’re not only able to stay up on top of viral content, but are willing to help others. 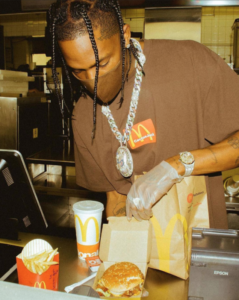 Celebrity and brands collaborations aren’t a new concept, but they were particularly popular in 2020—and some of them resulted in massive viral success. In September, rapper Travis Scott (who already was having a big year thanks to a successful virtual concert on Fortnite) teamed up with McDonald’s for the “Travis Scott Meal.” As a refresher, that meal was $6 for a Quarter Pounder with cheese, bacon and lettuce, a medium order of fries with BBQ for dipping, and a Sprite—Scott’s favorite order. Beyond just the meal, Scott’s record label Cactus Jack partnered with the food chain for a merch drop that included t-shirts, hoodies, shorts, sweatpants, lunchboxes, cereal boxes, cardboard cutouts of a Scott action figure, house slippers with fry laces, and a $90 nugget body pillow, which sold out and became one of the weirdest products to come out of 2020. The effort began trending on TikTok when millions of users used the hashtag #travisscottmeal (which has 66.4 million views) to share themselves ordering the meal either blasting Scott’s song “Sicko Mode” or using secret catchphrases to place orders. As a result of the collaboration, McDonald’s reported that Scott’s meal collaboration helped boost their sales: At the end of September, they reported that comparable sales at U.S. restaurants rose 4.6% in three months after they were down by 8.7% the year before. Other notable celebrity and food brand collabs from the year involved Dunkin and Charli D’Amelio’s drink inspired by the TikTok star herself, and Chipotle and Miley Cyrus’ limited edition burrito which was inspired by her favorite order and a TikTok challenge. Pairing up with a young celeb for an approval-stamped (and well-branded) menu item was a go-to in 2020—and after all the revenue boosts, we’ll continue to see them next year. 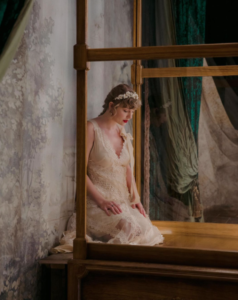 Cottagecore Was the Defining Aesthetic of the Pandemic

Sure, young consumers leaned on more comfortable garb while in lockdowns leading to a surge in loungewear and athleisure sales, but as the pandemic persisted, many of them turned to other fashion and aesthetic trends as a form of escapism—and longing for the days when we could go out and dress up. One trend in particular that’s been the most defining of this era? Cottagecore. Described as a “soft and domestic” look inspired by flower picking, cooking, cleaning, and “daintily” decorating homes, this comforting content is full of images of “pressed lilacs, frilly dresses, moss covered trees, and thatch-roof cottages.” The hashtag #cottagecore currently has 4.7 billion views on TikTok alone. Over the summer, a cottagecore-themed $490 strawberry dress designed by Lirika Matoshi became one of the most sought-after pieces of fashion on social media (the hashtag #StrawberryDress has 62.3 million views on TikTok) leading to companies attempting to make cheaper knockoffs of it. While the dress has been available since July of last year, sales for it “exploded” this August—increasing 1,073% compared to the same time last date period in the previous month. According to Google Trends, searches for Matoshi’s name and the term “strawberry dress” spiked at the end of July. And of course, one of the biggest displays of cottagecore came from Taylor Swift. The singer-songwriter dropped surprise album folklore in July (followed by another one—evermore—this month) both of which included heavy cottagecore imagery in the album art, music videos, and merch. (Her ability to stay on top of today’s trends is one reason why she’s Gen Z’s favorite musician.) The cottagecore trend even inspired a lot of sub trends, including “cottagegoth,” “feralcore,” “gremlincore,” and “goblincore,” which are basically just darker versions of cottagecore. As most young consumers continue to stay at home entering 2021, trends that allow them to fantasize about a happier, more peaceful alternate reality during a hard time will surely continue.