How Halloween is Happening At Home on The Viral List

Everyone is getting dressed up and celebrating Halloween at home, haunted drive-thrus and car washes are taking over spooky season, people can’t get over how accurately this Gen Zer is portraying the 2000s, and the internet is not happy with Kim Kardashian West flaunting her wealth—and more stories and youth news you shouldn’t miss this week… 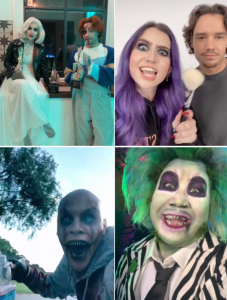 Young Consumers Are Really Excited to Celebrate Halloween—Even At Home

It’s Halloween! And even though it’s looking really different this year, young people are still excited to celebrate at home. On TikTok this week, the hashtag #halloweenlook has earned 1.4 billion views, while #mycostume has 1.8 billion views—and both feature users showing off the costumes they are making and are wearing while quarantining at home. And the hashtag #halloween has 22.2 billion views. Online celebrities are also getting into the spirit of the holiday: Beauty influencer Patrick Starrr shared a video of himself using the hashtag, and transforming into legendary character Beetlejuice, which received 4.8 million views. Though many won’t be leaving their homes for the holiday, they’re clearly still enthusiastic about celebrating any way they can. In fact, many started to celebrate spooky season before October began. At the beginning September, young people were eager to welcome fall into their lives and the hashtag #Spooktober began trending proving that young consumers were beyond ready for the season of witches and ghouls. Home Depot released their now ultra-famous giant 12. Ft skeleton in September, which has continued to sell out. Young consumers’ excitement for celebrating at-home Halloween is likely a preview of what’s to come for the winter months. We told you how many young consumers were already getting into the holiday spirit, and their desire for festivity will certainly grow as we get closer to November and December. 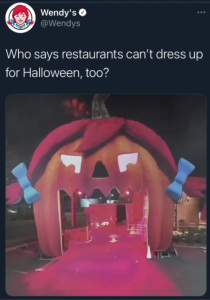 Social media isn’t the only place Halloween celebrations are trending. Drive in and drive through Halloween experiences have been setting the bar for COVID-safe holiday entertainment, and consumers are lining up for them. Earlier this month, entertainment companies like Freeform and Hulu came up with drive-in and drive-thru options for fans to safely watch their horror content. Meanwhile, car washes across the country have transformed their regular business into spookfied ones by adding strobe lights, signs, creepy clowns, and scary iconic characters like Pennywise, Jason Voorhees, and Michael Myers to the car wash experience. One in Alabama has added an effect where “red neon lights” make the water look like blood as it mixes with soap and creates a “crimson foam” making it feel like attendees are in a full-on horror flick. They’ve had hundreds of cars line up to drive through this season. And earlier this week, Wendy’s announced that they were launching a three-day “scary-through” at one of their Los Angeles locations. On Twitter, they shared a post showing the construction of their new, decked out drive-thru, featuring a Jack-o’-Lantern donning Wendy’s signature red ponytails. When cars enter the drive-thru, they will be able to participate in a dinner party hosted by Mad King and will encounter creepy clowns, scarecrows, and of course, jack-o-lanterns. While Halloween may be winding down, the concept of drive-in and drive-thrus are a major opportunity for brands to help young consumers to celebrate the next round of holidays. YPulse’s Driving Forward report found that 11% of 20-38-year-olds have purchased a car because of COVID, while 25% of 18-24-year-olds have become more interested in buying a car because of the outbreak. 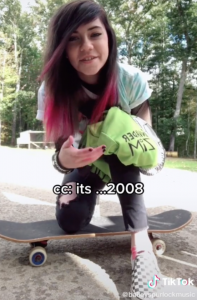 It may be 2020, but the 2000s are definitely back—and one TikTok user threw it back to 2008 in a viral video that has accumulated 3.2 million views. In it, musician and YouTuber Bailey Spurlock (who has 65.9K followers) is seen talking to the camera in POV-style to an unseen viewer from 2020 who appears to have “woken up” in 2008 after a skateboard accident. Spurlock informs the viewer that TikTok doesn’t exist and there isn’t a pandemic. She’s completely decked out in early 2000s attire, from the pink-tipped scene haircut to the Invader Zim t-shirt, Vans, and all the rubber bracelets, and makes references to Nickelodeon’s The Fairly Oddparents and pop punk band My Chemical Romance. (“Let’s just hope you’re ready in time for the my chem concert.”) Followers have been commenting on how eerily “accurate” her depiction of year 2K8 is, and their nostalgia for the simpler era is clear. Because her original video blew up, Spurlock has created several follow-up videos—in one she listens to her ipod while making plans to see Twilight—which have also accrued millions of views. 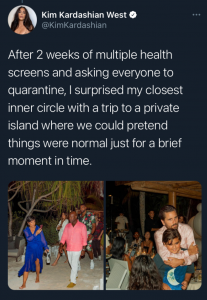 After bringing back velour tracksuits last week, Kim Kardashian West is going viral again this week—but this time it’s for backlash on a series of tweets. On Tuesday, Kim Kardashian West posted a Twitter thread (which received 104.2K likes, 4,302 retweets and 8,335 quote tweets) that…has not been received well. The star shared: “After 2 weeks of multiple health screens and asking everyone to quarantine, I surprised my closest inner circle with a trip to a private island where we could pretend things were normal just for a brief moment in time.” In the now massively viral meme, users are copy/pasting her caption and placing it on photos from other infamous trips from TV shows and movies (like Lost and Jurassic Park), and other viral moments in history (like Fyre Festival). Many have criticized her for tweeting about renting a private island during a pandemic when so many have lost their lives and livelihoods. West also went viral for another birthday tweet showing Kanye’s present to her: a hologram of her late father Rob Kardashian. And of course, it inspired yet another meme. If there’s anything the memes show it’s that quarantined young consumers don’t want to see celebrities flaunt their privilege online right now. During COVID, some influencers have received backlash for fleeing their cities, while others have been called out for partying, and back in April we called out that privilege backlash was likely to change influencer culture for good this year. 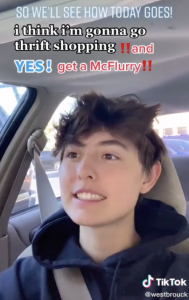 TikToker users are keeping their spirits up during the pandemic by sharing the most positive part of their days by using the hashtag #YouGotThis (and it already has 2.3 billion views).

The witches of TikTok are back! Just in time for the election.

This Missouri-based activist and Black Lives Matter organizer is trending for a (brutal) speech she made at a police town hall.

Attention Millennial pet owners: This dog groomer is getting a lot of attention for her TikTok videos revealing secrets that customers should know about the process.