An indie video game has gotten newfound attention during the pandemic, TikTokers are celebrating the beginning of fall, Netflix is taking young viewers on a mystery adventure with Enola Holmes, and young people are protesting for Breonna Taylor—plus more stories and youth news to wrap up your week… 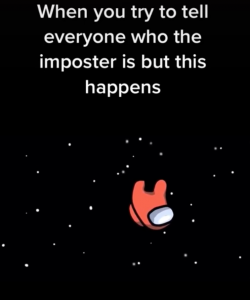 Among Us Is Really Popular With Young Gamers Right Now

In recent months, Among Us, a multiplayer social deduction indie game, has exploded in popularity. The two-year old party game allows up to ten players and takes place in a space-themed setting, with players serving as “spaceship crew members” who are preparing for a departure. However, a few players are randomly and secretly assigned the role of “alien imposters” who kill and frame the other crew members and attempt to take over the ship. The other players (crew members) have to figure out who the imposters are before it’s too late. According to SensorTower, the game got 18.4 million mobile downloads in August—eight times July’s 2.4 million downloads. It earned another 41.9 million mobile downloads this month alone. It’s also one of the most popular games on Steam, and the newfound attention has been credited to popular Twitch streamers like Pewdiepie, Shroud, Ninja, and Sodapoppin, who has (jokingly) demanded credit for being the original gamer to bring Among Us back into the limelight. And of course, its newfound virality has led to memes, including ones about how Among Us is “taking attention away from” other popular video game Fall Guys. The #amongus hashtag on TikTok has 4.3 billion views, and fans are creating art dedicated to the game. Because it’s become so big, developer InnerSloth canceled the anticipated sequel so they could instead work on improving the first interation. Video games have ruled the pandemic, and YPulse found that 46% of 13-39-year-olds started playing a new mobile or video game because of quarantines. 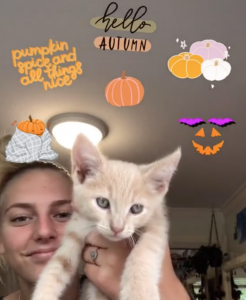 TikTok is REALLY Excited About Fall

Goodbye, summer. With the first week of autumn kicking off this week, users on TikTok are already showing their excitement for the new season. The hashtag #hellofall has 1.7 billion views with users showing off their favorite fall outfits, drinks, and outdoor activities, while #pumpkinseason has 2.1 billion views. Brands like Dunkin’ and Brach’s, and many others, were already ahead of the game, launching pumpkin spice lattes, Thanksgiving-themed dinners, and Halloween candy as early as August. YPulse’s PULSE on-demand survey found that 23% of 13-39-year-olds plan on attending or hosting fall or holiday events, and our Halloween report found that 89% of 13-39-year-olds still plan on celebrating the holiday. We also told you young consumers are already getting into the Christmas spirit, and prepping for an early holiday shopping season. During the pandemic, young people have embraced the seasonal holidays as a way to escape and give themselves something to look forward to during a difficult and uncertain period. 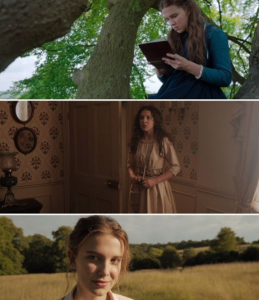 Move over Sherlock Holmes, it’s time for your sister to shine. On Wednesday, Netflix debuted their movie Enola Holmes, based on the book series of the same name and focuses on the adventures of Sherlock’s younger sister. The film stars Stranger Things’ Millie Bobby Brown as the titular heroine, Henry Cavill as her famous private detective brother, and rising star Louis Patridge as Lord Tewksbury. In just a few days, the movie has already made its way to the platform’s most-watched and trending content, taking the number two spot. Brown and Netflix have been heavily promoting the film across social platforms too. On Brown’s TikTok account (where she has 12 million followers), she shared a post of herself lip syncing to the movie’s trailer—which received 35.4 million views. The hashtag #enolaholmes has 86 million views, and is full of followers’ excitement and reactions to the movie. Fans are even already calling for a sequel. On her Instagram account, Brown shared four separate posts promoting the film—all of which has garnered millions of views and likes. Meanwhile, Netflix teamed up with Escape Hunt UK to put together a game that transforms players’ homes into an escape room. In it, users are taken across Victorian London as they look for Enola while solving various puzzles and challenges. The quick success of Enola Holmes shouldn’t come as a surprise given Brown’s following. She’s already built quite a fan base after her breakout role as the telekinetic Eleven on Stranger Things, which was the top show young viewers were binging last year. In an interview, Brown (who also produced the movie) told Vogue that they wanted to make something that would inspire young girls. “As young girls at work, in schools and online, sometimes we aren’t seen as equals,” she said. “The film empowers young women to speak up for what they believe in.” 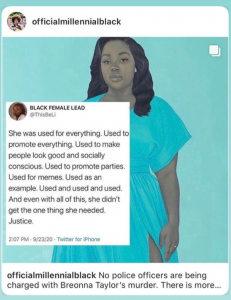 The Internet Reacts to the Verdict of Breonna Taylor’s Case

On Wednesday, after six months of waiting and no arrests following the death of Breonna Taylor, who was fatally shot in her own home by three Louisville officers, the city of Louisville announced that only one officer would be charged with “wanton endangerment,” with no charges were directly made to the shooting and death of Taylor. Following the final verdict, protests erupted both digitally and in-person in Louisville, and around major cities in the U.S. ESPN anchor Malika Andrews went viral after tearfully breaking down on SportsCenter that “could have been me.” This wave of protests comes only a few months after the Black Lives Matter protests that were sparked in light of George Floyd’s death, which resulted in a reckoning in young activists and across various industries. YPulse found that racism is the top problem that young people believe they face today and our Views on America report found that 68% of 13-18-year-olds have been participating in Black Lives Matter protests and awareness. In a Twitter post that has garnered 524.9K likes and 206.2K retweets, and has been reshared across other social platforms, user @ThisBeiLi wrote about Taylor: “She was used for everything. Used to promote everything. Used to make people look good and socially conscious. Used to promote parties. Used for memes. Used as an example. Used and used and used. And even with all of this, she didn’t get the one thing she needed. Justice.” 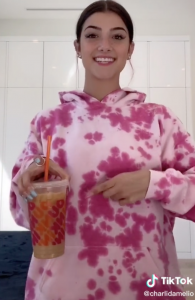 Thanks to Charli D’Amelio, Dunkin’ saw a 57%  spike in app downloads as “hundreds of thousands” bought her drink.

Cardi B’s two-year-old daughter Kulture has joined Instagram and already has more than a million followers.

Following the drama at Bon Appétit, chef Sohla El-Waylly is getting her own show.

Euphoria’s Zendaya made history for becoming the youngest Emmy winner to win Lead Actress in a Drama.

Over half a million viewers tuned in for BTS’ first-ever Tiny Desk Concert for NPR, which “obliterated” the record for most views in 24 hours.

Singer and rapper Bad Bunny “stopped traffic” in NYC during a virtual concert (that brought in 10 million viewers for the livestream) that took place on a moving bus.

The Billboard Music Awards nominations are in and Gen Z-favorite musicians like Billie Eilish, Lil Nas X, Lizzo, and Post Malone are leading the way with the most nominations.

A woman shared a selfie to show the struggles of balancing being a mom with work.