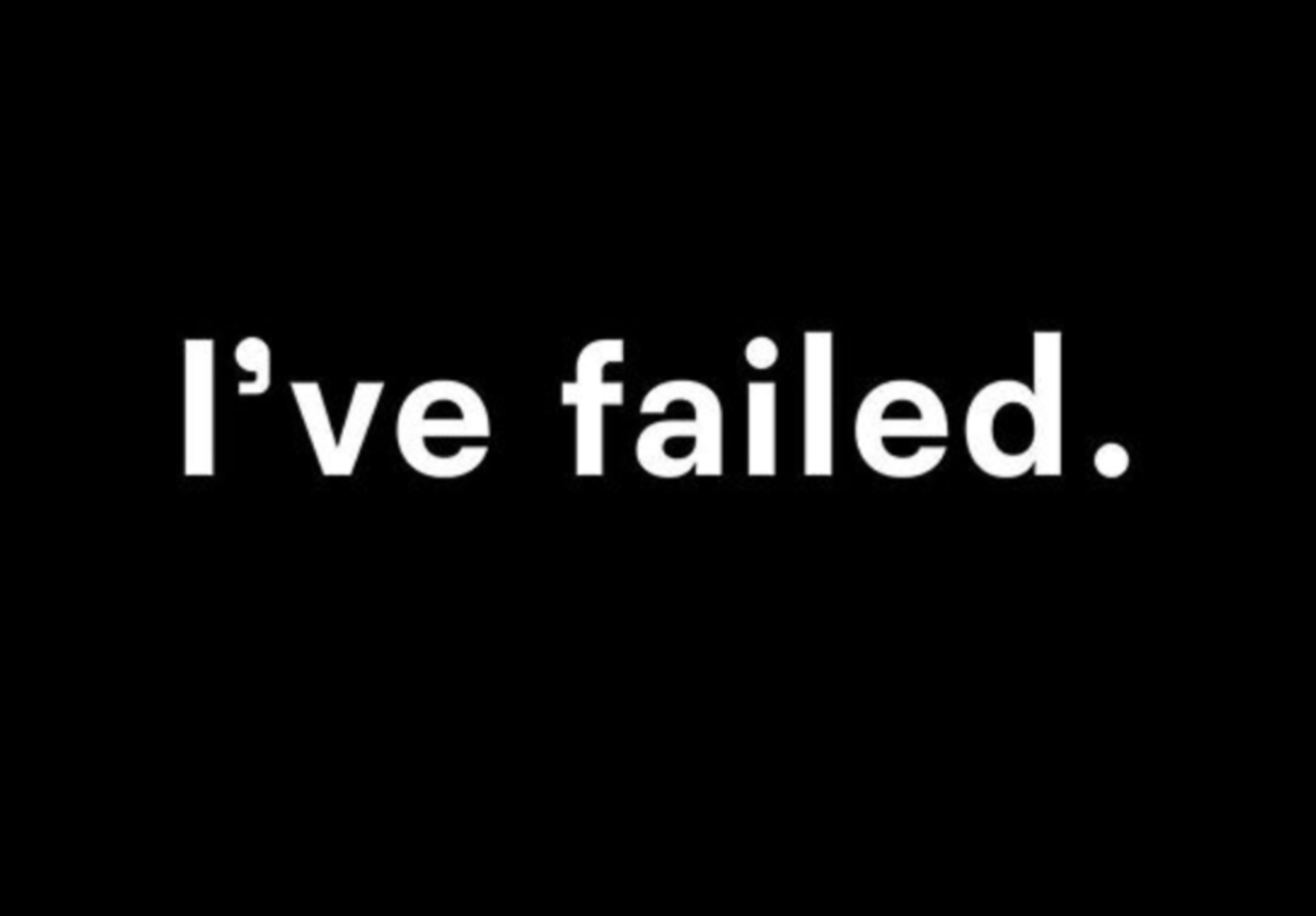 The response to #BlackLivesMatter continues as several CEOs step down, hashtags expose companies’ lack of diversity and pay disparities, celebrities “give up” their Instagram accounts to amplify Black women’s voices, and this viral internet song has become the anthem of protests—plus more stories and youth news you shouldn’t miss this week… 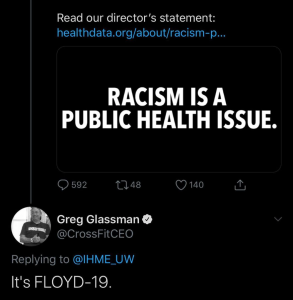 The week following ads and statements showing support for #BlackLivesMatter (which drew both praise and ire), a wave of brands is being called out by former employees—forcing many executives to acknowledge past “racism and discriminatory” behavior. Young online users who have pointed out the “hypocrisy of bland Instagram statements” are also questioning the makeup of their executive teams. The “reckoning” has forced executives to further the discussion on their social platforms. The founders of Dollskill, Refinery29, Bando, and Reformation (whose “I’ve failed.” response by CEO Yael Aflalo received nearly 50K likes on Instagram) all released statements about how they’ve “messed up” in the past and promised to do better. The CEOs from the latter three companies have stepped down, Leandra Cohen, founder of fashion blog Man Repeller, also stepped down after criticism about diversity on the team, while The Wing’s CEO Audrey Gelman announced that she will be leaving to make way for “a long overdue era of change” for the company. The wave continued when NYTimes Opinion Editor resigned after several reporters tweeted that a recently ran op-ed “puts Black NYTimes staff in danger.” But perhaps one of of the most talked about exits was Bon Appétit’s editor-in-chief Adam Rapoport, who stepped down after assistant food editor Sohla El-Waylly (who made frequent unpaid appearances on the YouTube channel) accused the popular food publication of pay inequity between the BIPOC and white employees in her Instagram Stories. Many staffers followed suit and revealed the “toxic” culture they worked in. But it doesn’t end there: the future of CrossFit is in question in the wake of racist comments and actions from their now former CEO Greg Glassman. After a turbulent call with gym owners in which Glassman stated—among other things—that “we’re not mourning for George Floyd,” and a tweet making light of Floyd’s death, the brand is facing major backlash. Brands like Reebok, Rogue, FitAid, and several gym affiliates announced that they will be severing ties with the fitness company. Glassman has since announced that he is resigning and stepping down. Earlier this week, we wrote about how brands need to be self-aware of their previous track record and admit past wrongdoings to earn the respect of young consumers—and it is clear that they need to account for organizational racism in real time as well. 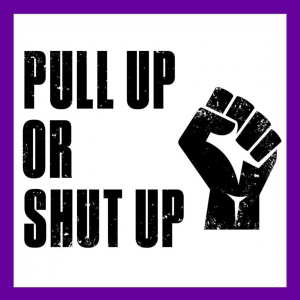 Meanwhile, Hashtag Campaigns Are Calling For Transparency From Companies

At the beginning of June, Uoma Beauty founder Sharon Chuter started the #PullUpOrShutUp challenge (the official @pullupforchange Instagram account already has nearly 100K followers) calling for beauty brands to reveal how many of its employees are actually Black, on social media in a 72-hour period. The challenge exposed the beauty industry’s “lack of diversity.” Many Gen Z and Millennial favorite beauty brands (along with several others) participated in the challenge: Glossier revealed that 9% identify as Black, Kylie Cosmetics revealed that 13% do, E.l.f Cosmetics revealed that 7% do, and Milk Makeup revealed 9%, as well as actionable steps on how they plan on doing better in the future. YPulse found that 51% of 16-34-year-olds believe brands can support the #BlackLivesMatter movement by changing the way they do business whether through hiring or training practices. At the same time, on Twitter, #PublishingPaidMe began trending this week after two YA authors, Tochi Onyebuchi and L.L. McKinney, started the campaign to highlight the pay disparities between non-Black authors and Black authors, and “prompt the publishing industry to reckon with this gap.” Well-known Black authors like Roxane Gay, Jesmyn Ward, Kiese Laymon were honest about the money (or lack thereof) that they received for writing their “bestselling, critically acclaimed books.” For example, Gay said she received a $15,000 advance for her 2014 NYTimes bestselling essay collection Bad Feminist, while white author Lacy Johnson tweeted that her 2018 essay collection, The Reckonings, sold for $215,000. Over on Instagram, the account @influencerpaygap, which has garnered 16.7K followers, emerged to expose the pay gap between Black and white influencers. 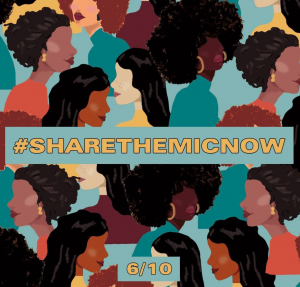 YPulse found that 51% of 16-34-year-olds say brands can support the #BlackLivesMatter movement by amplifying the voices of Black leaders—and on Wednesday, several actresses, authors, fashion designers, athletes, politicians, executives, and activists participated in the #ShareTheMicNow social media campaign. Organized by Bozoma Saint John, Luvvie Ajayi Jones, Glennon Doyle, and Stacey Bendet Eisner, the purpose of the campaign was for Black women to share their stories and experiences on the accounts of “white women in the entertainment industry.” Their official Instagram account, @sharethemicnow, has 32.1K followers. “When the world listens to women, it listens to white women,” read the official statement of the campaign. “For far too long, Black women’s voices have gone unheard, even though they’ve been using their voices loudly for centuries to enact change.” Kourtney Kardashian, Gwyneth Paltrow, Julia Roberts, Ashley Graham, and many others participated and “gave up control” of their Instagram accounts to magnify the voices of Black women. The videos and posts of the celebrities who participated garnered thousands and millions views. Earlier this week in a separate initiative, Selena Gomez, Shawn Mendes, and other celebrities let Black activists and organizations take over their Instagram accounts to educate their followers and amplify Black voices. 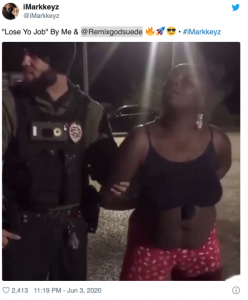 These Viral Songs Have Become Anthems of the Protests

When a video of Johnniqua Charles (who at the time was still unknown to the rest of the world) surfaced online, she didn’t expect to become a viral sensation. In the original video, Charles is seen asking a police officer the reason behind his detaining her and follows by saying “You about to lose yo job” and “Get this dance” before chanting the former phrase over and over again. Immediately, it gained traction on social media. Twitter user @Remixgodsuede remixed the song into a one minute and 24 second video that accrued 13 million views—and it quickly became an anthem at protests. In videos captured at rallies, many young activists have been seen singing or playing the song in the background (like, in this tweet from @JaVelle, which has received 956K views). Other tracks have become anthems of the protests and the “soundtrack of the uprising” as well, including Jeremy Frisch’s now viral response to the LAPD during a police commission call via Zoom where he cursed at them and yelled “I yield my time!” and finally: a “No Justice, No Peace” techno remix by Detroit protesters (in a video that has amassed 3.2 million views). Classic songs like Ludacris’ “Move Bitch,” 2Pac’s “Changes,” and Vanessa Carlton’s “A Thousand Miles” have also been heard at various demonstrations. As for Charles, she said the newfound attention has “turned her life around.” In an interview with BuzzFeed News, she revealed that she was homeless and dealing with addiction until recently, when the viral video and song resulted in her reconnecting with her family. She even started an Instagram account @getthisdance, which has 53.9K followers and is managed by her sister Andrea. 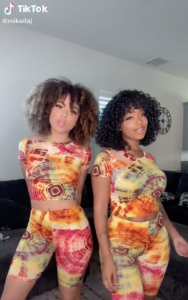 TikTok users are #keepingitcute by showing their best dance moves to Chloe x Halle’s “Do It.”

Meanwhile, “Third Amendment” memes are having a moment on TikTok amid the nationwide protests.

A TikTok video is going viral for highlight the racial bias against Black people in healthcare.

Witches on TikTok are using their “powers” to show support amid the protests.

BabyNames.com made a powerful statement on their site supporting Black Lives Matter.

In a partnership with the NAACP, some celebrities participated in a “Take Responsibility” PSA, but some fans are already calling it “incredibly cringeworthy.”

A petition went around calling for The Bachelor to cast a Black lead next season—and they listened.

Sony unveiled the design for the new PlayStation 5 and online users are already making memes about it.