Pay Attention to These Lessons on Brand Involvement in #BlackLivesMatter 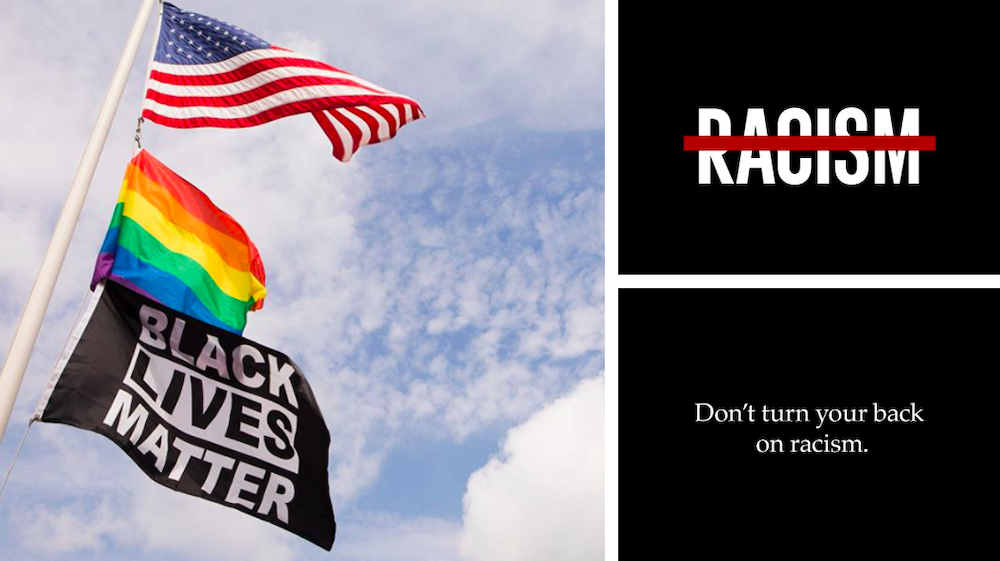 Before you post your message of support, you might want to read these lessons from the brand response to #BlackLivesMatter so far…

YPulse’s PULSE poll on the protests found that 69% of 16-34-year-olds in the U.S. believe that brands should get involved in #BlackLivesMatter. It’s incredibly clear that youth brands need to be participating in supporting this cause right now. In fact, as Business Insider reports, many are telling influencers and celebrities that if they aren’t posting to show support of Black Lives Matter, they should cease posting completely. But that doesn’t mean that all brand statements supporting the movement are well-received. Young consumers are being incredibly vocal about their feelings on brand involvement in #BlackLivesMatters—one look at social media reveals a flood of comments and content addressing brand responses, and there are plenty of lessons to be learned.

So, before you post that black and white text graphic sharing your support for the movement, read this (hardly exhaustive) round up of some of the lessons that brands have (hopefully) learned so far: 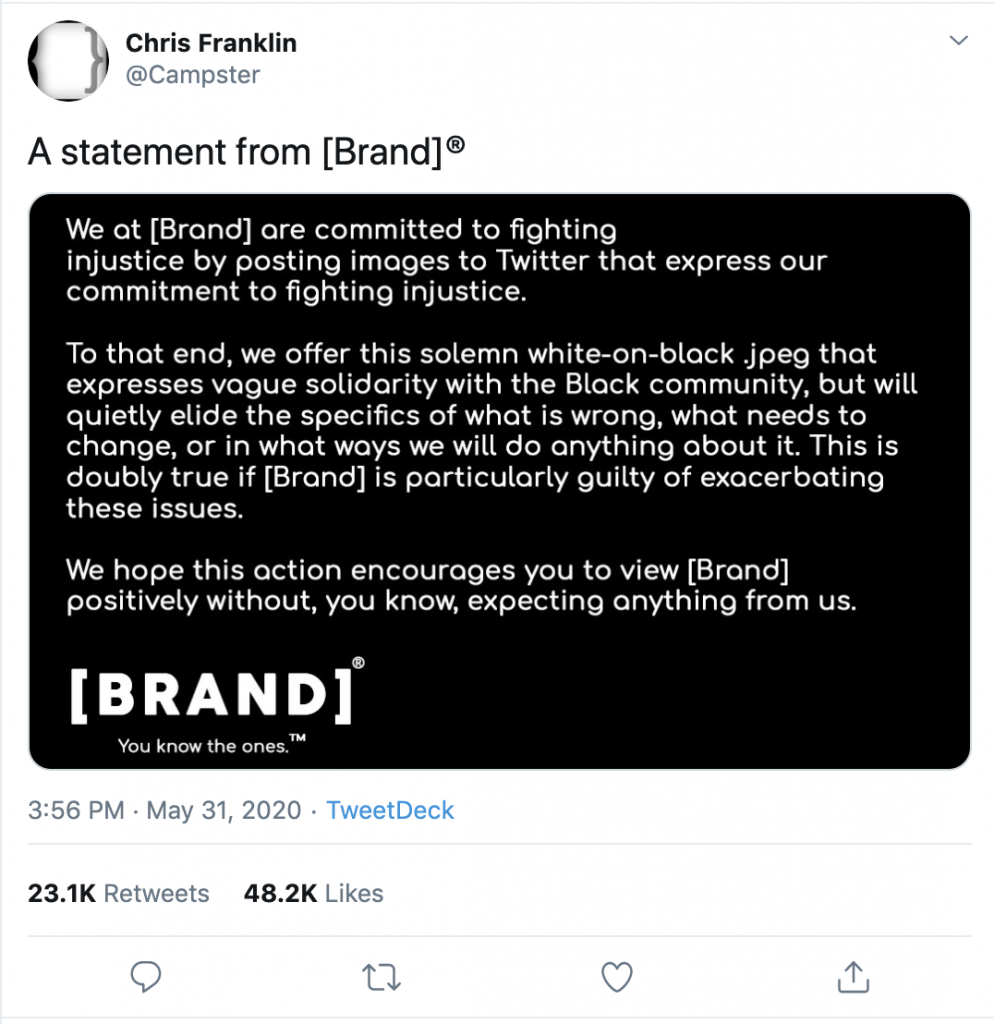 A meme about generic and hollow corporate posts has gone viral in the last few weeks. The white text on a black background (which has become a hallmark looks for serious brand posts) begins: “We at [Brand] are committed to fighting injustice by posting images to Twitter that express our commitment to fighting injustice.” The parody post perfectly encapsulates so many young consumers’ frustration with brands’ early responses to #BlackLivesMatter and the current protests: vague statements of support without actions to show that support are all too common. While Disney, Amazon, Netflix, and Hulu issued statements supporting the “Black community,” Adweek reports that young advocates want “more than words” and are asking that they donate to relevant organizations and efforts too. As Mashable also details, many brands have faced criticism for not backing up their sentiments and posts with donations or “concrete anti-racism actions.” Adidas’ post is a prime example: the brand shared an image of the word “racism” crossed out, along with the message, “Take action. Things won’t change unless we create that change.” But the message, which included a few other sentences about “moving forward” and “fighting what’s wrong” didn’t include any reference to what they as a brand would be doing to support and change things going forward. The comments on the post show young consumers are not impressed, with one of the top Instagram responses declaring: “You did it adidas you stopped racism.” As we shared last week, 59% of young consumers want brands to make their support of #BlackLivesMatter clear on social media with a statement—but the same number say that brands should be donating to related funds, racial justice, or grassroots groups. As Vox reports, “open your purse” has become the rallying cry online in response to vague statements of solidarity. 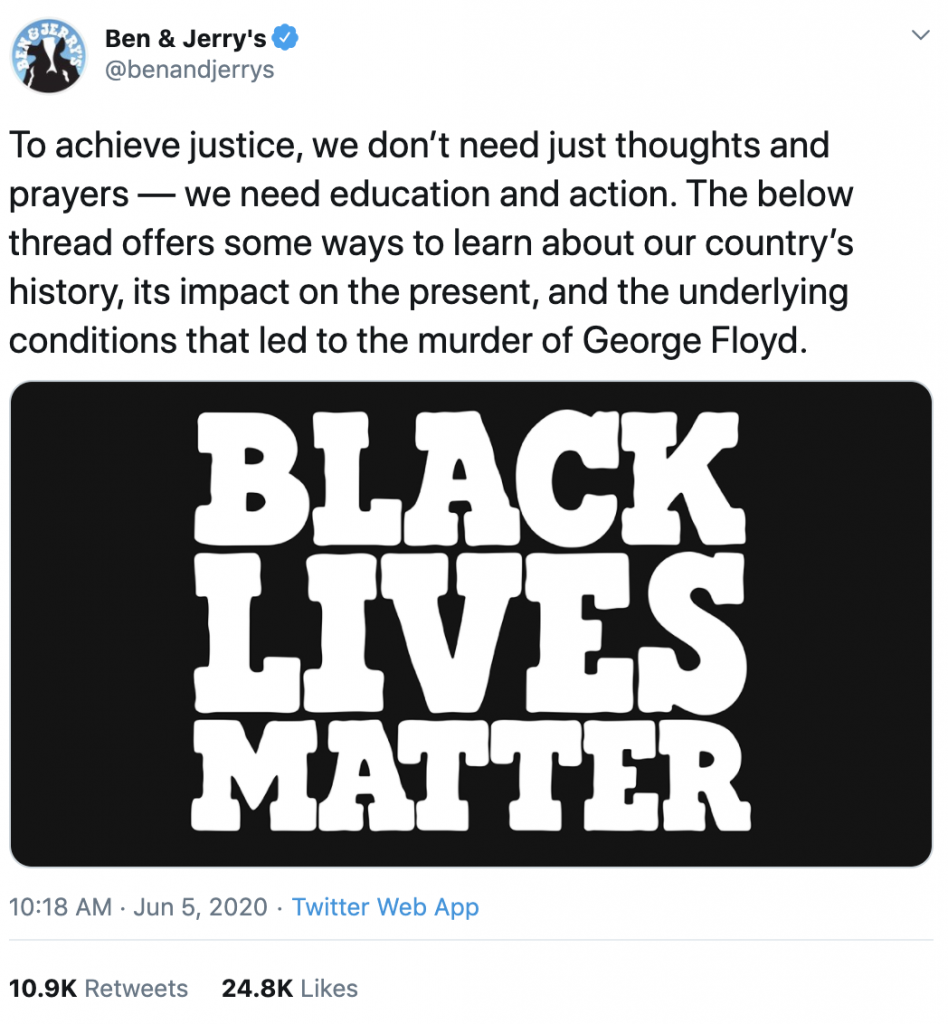 Get specific about what actions you’re taking.

Brands should also understand that even when a pledge of donations is made, young consumers want more details. As part of a piece examining the gaming world’s “too little, too late” reaction to the movement, VICE’s Gita Jackson outlines her criticism of the game company Wizard’s of the Coast statement. While the brand pledged “charitable donations” to specifically named organizations, Jackson explains: “Nowhere in this statement are Black people mentioned. The company talks about donating to Black centric charities, but it doesn’t say how much and it doesn’t say why. Neither does it mention police brutality or George Floyd’s name at all, which feels weird when the protest is being done in his name, after his unjust murder by police. It’s as vague as a statement could possibly be.” These sentiments clearly show that young consumers want brands to show up in a real way, and to clearly acknowledge the reason that the support is needed in the first place. When those clear actions are outlined, brands should know they also need to be specific—even more, they should acknowledge of the history that has led us to this point and the actions that can be taken next. Case in point: Ben & Jerry’s is being praised for taking a different approach and calling on white America to “acknowledge its privilege.” Their first statement on the issue declared, “We Must Dismantle White Supremacy” and included a clear and detailed list to take “concrete steps to dismantle white supremacy in all its forms.” A few days later, Ben & Jerry’s released a thread “offer[ing] some ways to learn about our country’s history, its impact on the present, and the underlying conditions that led to the murder of George Floyd,” sharing links to anti-racism education resources. Another message shares “12 things you can do right now to help end white supremacy and systemic racism.” In other words, the brand is actively using their platform not only to vaguely declare “support” but to further the movement with clear prompts and actions. It’s also worth noting that they did not stop at one post: a single message of support reads as an ad, and young consumers want long-term allies. 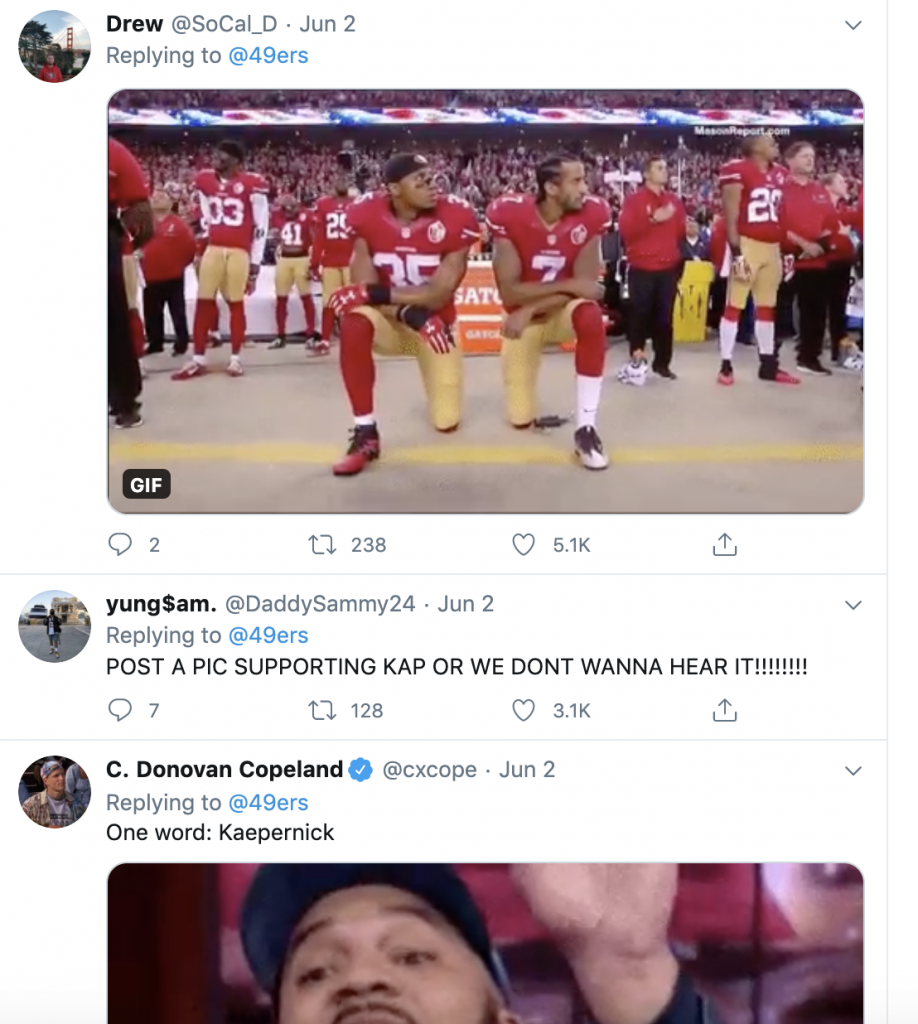 Your track record matters (and is remembered).

When we asked young people to tell us what brands are supporting #BlackLivesMatter in a meaningful way right now and how, Nike was one of the top brands that was mentioned as supporting the cause. On social media, the brand released a campaign that flips its famous slogan amid the protests, asking viewers, “For once, Don’t Do It.” The text-only video that was shared on all of their social media channels states: “Don’t pretend there’s not a problem in America. Don’t turn your back on racism. Don’t accept innocent lives being taken from us. Don’t make any more excuses. Don’t think this doesn’t affect you. Don’t sit back and be silent. Don’t think you can’t be part of the change. Let’s all be part of the change.” (They have since also announced $40 million in support of the Black community over the next four years.) Of course, Nike has long established themselves as an ally of anti-racism and #BlackLivesMatter, choosing Colin Kaepernick to be the face of a marketing campaign that addressed police brutality in 2018. As we told you at the time, the decision paid off for the brand, with brand affinity increasing among young consumers. It also set the stage for the brand to authentically participate in the movement today, as they have a history of amplifying voices protesting police brutality. But the last week has also been filled with examples of the opposite: brands whose statements of #BlackLivesMatter support have been called out as hypocritical due to documented instances of racism. In fact, on #BlackoutTuesday the San Francisco 49ers was one of the brands who received backlash for sharing the black square on Twitter as NFL fans and others bashed the team who kicked the former quarterback Colin Kaepernick off after “taking a knee” protesting police brutality in 2016. But they are not the only example. Eco-focused fashion brand Reformation’s Instagram post naming the organizations they would be to donate to in the “fight for justice” was flooded with comments from former employees, calling out the brand for mistreating Black employees and the founder for racist comments and actions. When McDonald’s released their new ad naming Trayvon Martin, Michael Brown, Alton Sterling, Botham Jean, Atatiana Jefferson, Ahmaud Arbery, and George Floyd as victims of police brutality and declared they stand with Black communities, their Twitter comments filled up with messages accusing the brand of, among other things a history of not listening to, supporting, or fairly paying their Black employees. The responses included one from the ACLU, saying “You haven’t even responded to our letter demanding paid sick and family leave for all employees, the majority of whom are Black or non-Black people of color. YOU are perpetuating racism and oppression by failing to protect the health of your workers.” These are just a few of the many examples of companies being called out as in-genuine (to put it gently) after posting #BlackLivesMatter messages. When statements of support are made by brands on public platforms, that also invites responses—and those responding are very likely to bring up past actions that don’t align with the statement. A brand’s entire history is easily accessible online, but even more than that, those who have experienced racism and injustice because of that brand are speaking out—and being heard. So, does that mean that these brands should stay silent? No, but acknowledging past issues and problematic behavior should be part of the plan—which brings us to our next lesson… 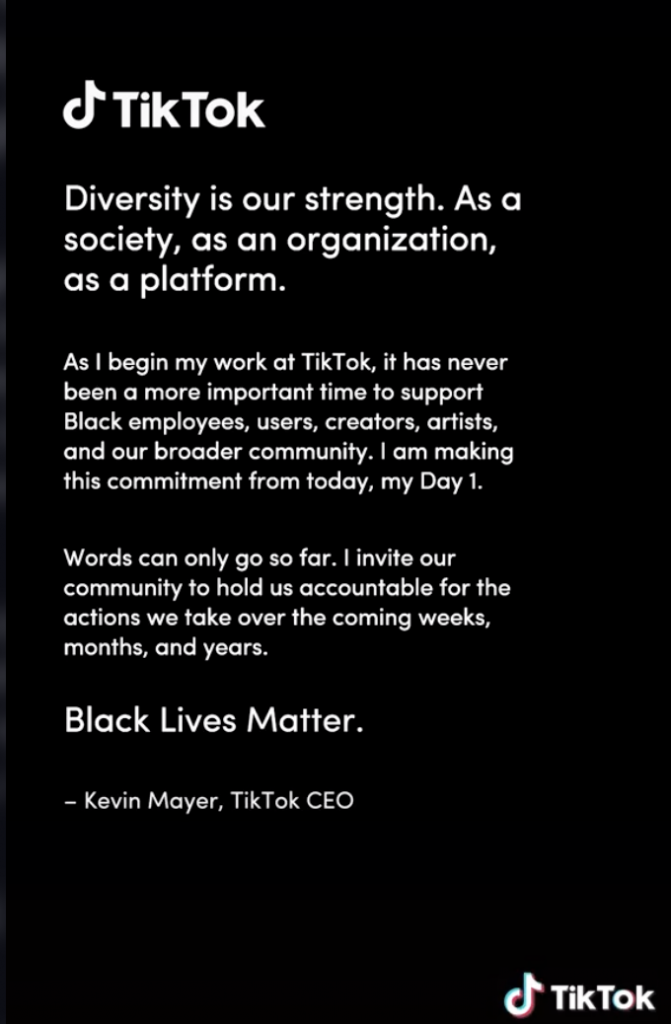 Admitting past wrongs is necessary.

When a brand has a history of wrongdoing, young consumers want them to acknowledge it head on. According to YPulse’s research on brand causes and crises, 57% of 13-39-year-olds believe that a brand being honest about making a mistake makes them feel they can trust the brand more. TikTok is a recent example of a brand that has done just that. As BuzzFeed News reported, the app has apologized to Black creators after being accused of censorship. In May, Black creators on the app started the #ImBlackMovement hashtag, saying the app was removing and banning their content calling out police brutality. At the height of the protests, the app was still being accused of censorship: videos posted under the hashtags #BlackLivesMatter and #GeorgeFloyd on the platform were allegedly receiving zero views, which TikTok claims was due to “technical difficulties.” Now the app has laid out a plan of action to address the recent criticism that they have been suppressing Black creators. In a statement of public apology titled “A message to our Black community” the platform acknowledged the protests—both in cities and on their own app—and shared “We acknowledge and apologize to our Black creators and community who have felt unsafe, unsupported, or suppressed. We don’t ever want anyone to feel that way. We welcome the voices of the Black community wholeheartedly.” They outline a plan to launch a “creator diversity council” aimed at identifying and uplifting voices that are driving culture, creativity, and important discussions on the platform. Acknowledging they “have work to do to regain and repair that trust,” in their apology, TikTok pledged millions to non-profits that fight racial injustice. Refinery29 reports that Black TikTok creators feel the statement “is a step in the right direction.” L’Oreal is another brand that has (thanks to public criticism) admitted to past wrongs and tried to make them right. When the brand posted their white text, black background message “Speaking Out Is Worth It” along with a statement about “stand[ing] in solidarity with the Black community,” they were quickly and publicly admonished by model Monroe Bergdorf, who was dropped by L’Oreal when she spoke out against racial violence in 2017. The model’s strong response declared, “I said yesterday that it would only be a matter of time before RACIST AF brands saw a window of PR Opportunity” and she admonished L’Oreal for jumping on the cause bandwagon. After her statements made headlines, the brand privately and publicly apologized, inviting Monroe to sit on their new UK Diversity & Inclusion Advisory Board. Their most recent Instagram features Bergdorf, along with a more detailed explanation of the actions they will be taking as a brand to “fight against systemic racism.” Both of the examples outlined here should serve as a guide: Brands that have made missteps (or worse) in the past should be prepared to publicly confront and apologize for those actions if they want young consumers to take their support seriously.