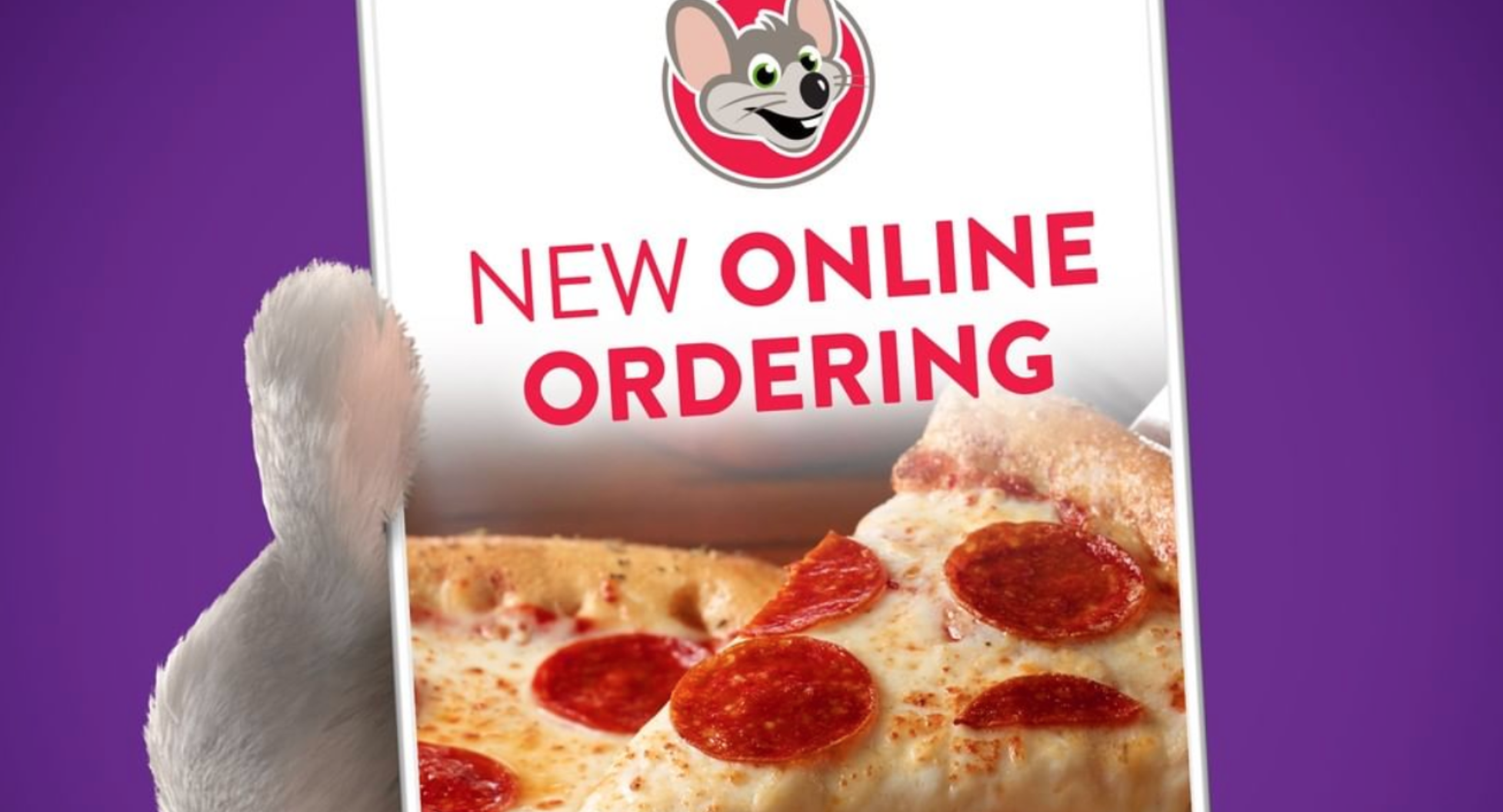 Major restaurants have been delivering food under new names, John Krasinski’s “Some Good News” is turning into a TV show, TikTokers reveal their alter egos in a new challenge, and a protest is brewing with the #ImBlackMovement hashtag on TikTok —plus more stories and youth news you shouldn’t miss this week… 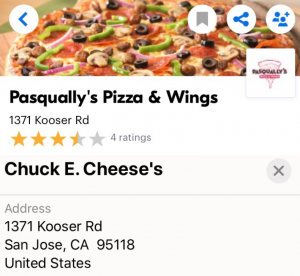 Food Chains Are Faking Out Customers on Grubhub

This week two restaurants were accused of selling and delivering food under fake names to trick consumers. First, it was discovered Chuck E. Cheese has been sellling pizzas under the name Pasqually’s Pizza & Wings. Last month, when a Reddit user u/KendallNeff thought she ordered pizza from a local restaurant by that name but discovered it shared the same address as the popular kids’ chain. The story began trending on Twitter this week when more users started sharing screenshots from GrubHub of the “Pasqually’s” restaurant. User @paulbensonsucks shared a tweet (that received more than 340K likes) accusing the brand of “trick[ing] a bunch of people into ordering Chuck E Cheese,” and others agreed that it was a “ploy” to sell more pizzas during the pandemic. The chain, however, claims it is a “new, delivery-only premium pizza brand.” Meanwhile, Twitter users also discovered that Applebee’s Neighborhood Grill has been selling chicken wings on the food delivery app under the name “Neighborhood Wings.” Even a Boston Market was recently found to be delivering food under the name “Rotisserie Roast” in Philadelphia. According to Grubhub, what these major restaurant chains are doing is allowed on the platform and is referred to as “virtual kitchens” or “virtual restaurants.” Pre-pandemic, delivery-only virtual kitchens on food delivery apps were already a rising trend as a way for restaurants to experiment with new menu concepts, but during this time, larger brands have jumped in on it—but they might want to make that clear to users’ before they order. 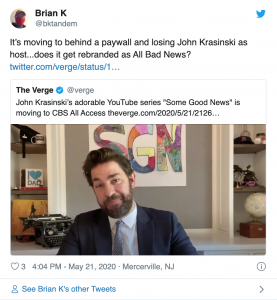 In early April, John Krasinski launched his “Some Good News” YouTube show to provide some pure content to viewers during the pandemic. Since then the channel has gained more than 2 million subscribers, and the feel good series was seen as a “life raft” for many quarantined fans, with content continuously going viral. But this week, it was announced that ViacomCBS has purchased the series after a massive bidding war. The show will now air on CBS All Access, putting the once-free web series behind a streamed paywall, and will no longer be hosted by Krasinski. Unfortunately, some fans aren’t necessarily finding the announcement to be good news, with some calling Krasinski out for “selling out” to a major corporation. YPulse’s COVID-19 special report on entertainment found that 67% of 13-39-year-olds are watching more uplifting content while in quarantine, and that YouTube is the top streaming platform they have been turning to for entertainment during this time. As streaming services continue to be popular with young viewers, only time will tell if the “Some News Good” migration will find a way to win over its current fan base as well as new viewers. 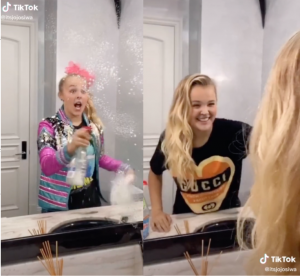 TikTokers Are “Transforming” In The “Wipe it Down” Challenge

TikTok continues to be the breakout app of the pandemic—and the “Wipe it Down” challenge is the latest to emerge. The premise is pretty simple: a TikTok user wipes down their mirror to the song “Wipe it Down” by BMW KENNY and their appearance changes for a split second to either an “alternate reality” or  “a cosplay or dressed-up version” of themselves before it’s scrubbed away. It really kicked off when comedian Lauren Compton (@iamlaurencompton) posted a video of herself (that garnered more than 36 million views) wiping down her mirror and transforming into Harley Quinn. Will Smith racked up more than 31 million views with his video, which pays homage to his character from Men in Black. But the most talked about submission is probably JoJo Siwa’s take, which got her fans (and haters) talking. In the video, which amassed 31 million views, the dancer and online personality (who has more than 22 million followers) is seen letting her down her signature ponytail and showing off her “natural curls” while participating in the challenge that she posted during her 17th birthday. 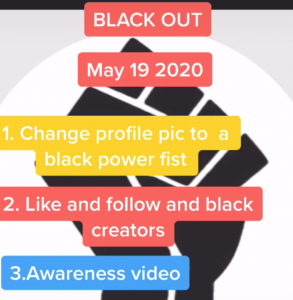 Black Creators Are Protesting TikTok With The #ImBlackMovement

Meanwhile, not everything is all fun and games on the app. Since joining TikTok a month ago, Black Lives Matter Utah founder Lex Scott (@lethallex) was banned for two weeks for allegedly “violat[ing] community guidelines” after posting videos that discussed police brutality. Other users claim they have also been banned or had videos removed after calling out racism. Shortly after, Scott started the #ImBlackMovement with a video (that has over 30K views) urging all black creators to participate in a “Blackout” by changing their profile photos to the black power fist, liking and following only black creators, and making awareness videos calling out racism on the app on May 19 to coincide with Malcom X’s birthday. The hashtag #ImBlackMovement has gotten over 24 million views so far. This isn’t the first time TikTok has been called out for potential discrimination. Earlier this year, Lizzo accused the app of body shaming after they removed some of her videos, and last year, a document created by TikTok was leaked after it allegedly stopped disabled users from going viral on the app. And with the #ImBlackMovement hashtag, users hope to fight public discrimination on the platform. 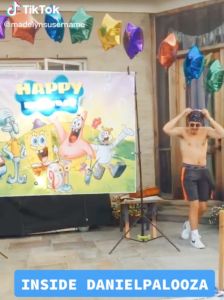 These siblings threw their brother his own music festival while in quarantine.

A mom on TikTok is getting praise for inventing water popsicles.

This TikTok parody of Wes Anderson’s films is “absolute perfection.”

Twitter uses are comparing their plans for 2020 to reality in a “sad” meme.

Lady Gaga and Ariana Grande dropped a new song and fans already have it on repeat.

Sesame Street’s Elmo has his own late show on Instagram.

Get ready for more 2000s nostalgia! Legally Blonde 3 is coming and Mindy Kaling has been hired to co-write the script.