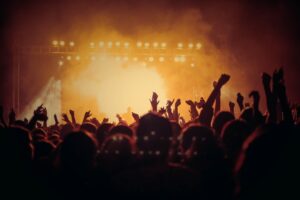 We asked Gen Z and Millennials to tell us the music artists that best represent their generations, and these 17 rose to the top…

Music has always been big in young people’s lives—and so have the stars behind their favorite songs. With the rise of social media and the alternate routes being carved for young artists to climb (or catapult) to fame, this has been never been more true. Where pop stars once seemed out of reach, these days, young consumers can interact with their favorite musicians directly as well as get a glimpse into their daily lives. On top of that, social media is a breeding ground for young musicians, giving them an opportunity to subvert the normal path to fame by simply going viral—which also gives young consumers the opportunity to feel like they’ve hand-selected their generation’s next stars by hitting “like” and “share.” Just look at the mega success story that is Lil Nas X, the artist behind Old Town Road, who landed his record deal after going viral on TikTok. In fact, nearly half of 13-37-year-olds tell us they’ve discovered a new musician or song through a social media video, and two-thirds say they’re interested in their favorite musicians’ personal lives, not just their music.

All of this is part of the grander fragmentation of celebrity, which is upending the usual fame pecking order. With this new landscape surrounding music, our most recent music survey asked 13-37-year-olds, “Who is the musician you feel best represents your generation?” Here’s what they had to say:

What Musician Best Represents Their Generation?

*This was an open-end response question to allow us to capture the full range of musicians that Millennials and Gen Z say best represent their generation—without our preconceived ideas shaping their responses. As with any qualitative question, the responses include those that are top of mind and those that are most popular. The lists are ordered according to number of responses received, and alphabetically when ties occurred.

Taylor Swift and Beyoncé are at the top of the ranking, which isn’t a surprise. For years, Millennials and Gen Z have listed the two female powerhouses as their top two favorite musicians, so it’s no wonder they also list the stars as the most representative of their generation. Millennials were more likely than Gen Z to name both Swift and Beyoncé (more on this below), and cited both artists’ talent and personal lived as reasons for naming them. One 30-year-old said of Swift, “She’s trying to grapple with activism vs career/art/friends/relationships and experiencing the ups and downs of your 20s, but on a global stage.” Others talked about her efforts to support causes and her honesty and authenticity as reasons she represents people their age. Beyoncé’s female empowerment, efforts for representation, and hard work were all mentioned as reasons she represents Millennials. One fan explained, “Beyoncé’s music has evolved as I have aged. She takes on more social issues, such as police brutality, as she has matured.”

The rest of the musicians at the top of list also represent the heavy-hitters that have dominated the favorites lists for years, but some rising stars made the ranking as well. Lizzo, who we called out as one to watch lands at number 11 on this list, which is no small feat. The flute-playing, rapping, twerking musician faced an uphill battle to reach the top of a music industry, with her hit “Truth Hurts” climbing to the top of the Billboard charts two years after its release. But her message of self-love is making her a body-positive, LGBTQ icon—and a symbol for a generation that is all about breaking down stereotypes.

Then there’s Billie Eilish, the 17-year-old genre-bending musician who leveraged a viral online following into superstardom this year. Eilish has earned billions of streams across platforms like SoundCloud, where she dropped her first track when she was just 12. And with a macabre sound that resonates with the generation’s dark side and over-the-top sense of street style, Eilish clearly represents Gen Z’s overall mood and aesthetic. In fact, when we break it down by age group, Eilish is actually the musician Gen Z says represents their generation the most:

When we break it down, it’s clear that there are some serious generation gaps when it comes to ideas of representation. In fact, Drake is the only top-five constant across the age groups, and, in general, Millennials listed the typical heavy hitters they grew up with, with older Millennials citing old school acts such as the Backstreet Boys and Michael Jackson as two of the most emblematic musicians for them. Those who named the Backstreet Boys mentioned their generation’s role in the boy band explosion of the ‘90s, as well as the fact that the band is touring again, “[a]lmost like they never left.” Millennials’ listis also heavy on upbeat pop, fitting for a generation known for their optimism growing up.

Gen Z’s top five, however, sets them squarely in the Genreless Generation with Borderless Culture tastes—eclectic, global, and harder to pin down. Gen Z respondents who named Billie Eilish mentioned her individuality, as well as her genre and gender-defying style as reasons that she represents their generation. According to one 16-year-old female, “She has redefined genres of music.” As i-D put it, “The idea that gender and sexuality are fluid — if not accepted by all — has firmly entered public discourse. But just as we move away from traditional boundaries of gender, Gen Z are also tearing down musical boundaries, instead embracing sounds that are fluid and difficult to categorize.” With 74% of 13-18-year-olds telling us their music tastes don’t fall into a specific genre of category, we can expect this generation to continue to seek out those genre-bending sounds—and to feel that that music represents who they are.

Eilish’s darker lyrics were also mentioned, with one young fan explaining, “she’s edgy and sad like we all are.” According to Quartzy,“Depression” and “anxiety” are becoming popular music lyrics for the most stressed generation. Eilish’s down-tempo beats and more macabre material (a few song titles include: “all the good girls go to hell,” and “bury a friend) clearly resonate with their gloomy streak.