Everyone is Obsessed with Home Depot’s 12 Ft. Skeleton on The Viral List

A giant skeleton is the most-wanted Halloween item, everyone is obsessed with this paint guessing game on TikTok, dark academia is this autumn’s aesthetic, and Nathan Apocada keeps going viral—and more stories and youth news you shouldn’t miss this week…

Sure, Halloween looks different this year, but that isn’t stopping young people from trying to celebrate safely and at home. The latest spooky item Gen Z and Millennials are obsessing over? A $300 12 ft. giant skeleton from Home Depot complete with glowing eyes. It’s so in demand that it’s been sold out on the retailer’s official site since the end of September, and resale prices on Amazon and eBay have soared to more than $1,000. And of course, many internet users are spotting the skeleton in the wild and sharing videos, memes, jokes, and using the skeleton as for their own “creative output.” The hashtag #12ftskeleton has 3.5 million views on TikTok. And according to user @cheeto_ego, for customers who desperately want the “emotionally unavailable” (a.k.a sold out) skeleton, they can go to Home Depot’s app and use the AR feature to place him digitally in their home. He’s even captured the heart of celebrities: Kourtney Kardashian shared on her Instagram Story that she is decorating her backyard with the giant skeleton. And he’s starting to grab brands’ attention: Slim Jim and Natural Light both posted memes about the skeleton on their Instagram accounts, and Budweiser, even announced that they are selling “oversized body pillows” shaped like their beer bottles so users can attach them to the skeleton on their social media posts for the growing “Bones & Bud” meme. 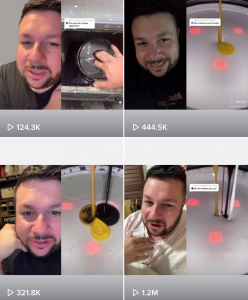 The Internet Can’t Get Enough of This TikTok Paint Guessing Game
In lockdowns, everything is entertainment—even mixing paint. Since mid-September, everyone has been obsessed with TikTok user and comedian @christianmhull, whose account is full of videos of Hull “frantically” guessing paint colors, which according to him has become an “addictive” guessing game. But even before Hull’s videos started gaining traction, other users were already getting into the game. The hashtag #guessthepaint has 22.1 million views on TikTok and several users have used the duet feature to split screen with user @paintturner, who has 2.7 million followers. He shot further into viral fame this week when Vox’s Internet Culture reporter Rebecca Jennings (@rebexxxxa) shared a thread on Twitter that Hull was currently her “main source of joy,” which received 5.5 million views, 481.3K likes, and 99.8K retweets. In the video Jennings shared, Hull is seen in a split screen with a video of paint being mixed. In it, handfuls of blue and red are being combined into a paint can of white. He starts to guess that it’s mauve, before changing his answer to a “lighter mauve” (which he gets correct!) The same pattern follows in several of his other videos. With more cooped up young consumers focused on revamping their homes (YPulse’s No Place Like Home trend report found that 64% of 13-39-year-olds say they’ve become interested in improving and fixing up their homes because of COVID-19), perhaps they (and paint brands) can learn a thing or two from Mr. Hull. 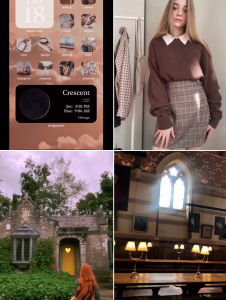 “Dark Academia” Is This Autumn’s Aesthetic

From various cooking and baking trends to the cottagecore aesthetic to the strawberry dress, many trends have taken over social media during the pandemic. The latest one? Dark academia, which is described as an aesthetic that “romanticizes a passion for art and knowledge,” New England, and an idealized campus life. While “dark academia” has been on Tumblr for years, the trend has seen a resurgence of popularity born out of the uncertainty around school schedules as many students still remain in lockdown while remote learning during the fall semester. It also aligns with autumn’s much darker tones and cooler weather, and is another way for young people to welcome in fall. The hashtag #darkacademia on TikTok has 128.1 million views, while hashtags like #studygram and #studyblr (which have generated millions of posts) shows similar content on Instagram. It is full of users sharing videos and images featuring stacks of books, corduroy, autumnal plaids and tweeds, knitted sweater vests, and looks taken straight from books and films like Beauty and the Beast, The Secret History, Dead Poets Society, and Kill Your Darlings. As lockdowns persist, many young people have been turning to nostalgic and familiar things that give them comfort during a difficult period. 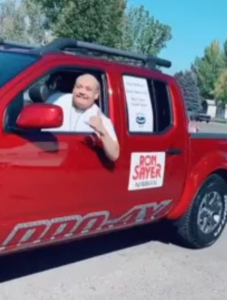 OceanSpray Is Making The Most of Their Viral Moment

Last week, we told you about how internet users were donating after discovering Nathan Nathan Apodaca (@420doggface208 on TikTok), whose video of himself skateboarding, listening to Fleetwood Mac’s “Dreams,” and drinking OceanSpray cranberry juice, went majorly viral. The clip led to the ‘70s hit song going back to the top of the music charts—and the story keeps getting better. Earlier this week, Fleetwood Mac member Mick Fleetwood posted a response video recreating Apocada’s clip, which has received 9 million views. Fleetwodd also surprised Apodaca during an interview with BBC, expressing his gratitude for bringing the song back into the spotlight. Meanwhile, OceanSpray’s CEO Tom Hayes responded this week by following in the foot steps of Apocada and Fleetwood by recreating the video, which received 2.3 million views. He even went a step further: Hayes teamed up with Nissan to gift Apocada a new truck and a trunk full of OceanSpray’s cranberry juice. Apocada, who was left “speechless” shared his reaction on Instagram, which received 1.8 million views. 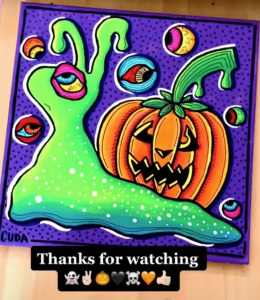 TikTok users are showing off their best Halloween and fall-themed drawings and paintings with #Artober, which has received 2.4 billion views.

The “How it started” meme is the latest to take over Twitter.

These popular Disney bloggers raised more than $50,000 to help the theme parks’ laid off employees.

Barbie (yes, the doll) is getting a lot of attention for a YouTube video addressing racism.

In one of her most political performances, rapper Megan Thee Stallion demanded justice for Breonna Taylor and protection for Black women during her SNL debut.