The internet is reacting to Lifetime and KFC’s Mario Lopez-led “steamy” mini-movie, Chipotle just made a Miley Cyrus-inspired burrito all because of a TikTok challenge, Taylor Swift dropped yet another surprise album and it’s already a hit, and holiday themed charcuterie boards are taking over social media—plus more stories and youth news to wrap up your week… 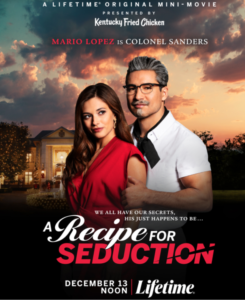 On Monday, Lifetime announced that it is collaborating with KFC for the “mini-movie” A Recipe For Seduction starring actor Mario Lopez as Colonel “Harland” Sanders. Both Lifetime and KFC tweeted the news, and a few hours later the fried chicken chain released a trailer for the mini-flick that received 25.5K views, and it has more than one million views on Lifetime’s YouTube. According to the trailer, Lopez’s Sanders is a chef “with a secret fried chicken recipe and a dream,” who falls in love with a young heiress from the wealthy family he begins to work for. So far, reactions on social media have ranged from excitement to surprise. One user tweeted: “Didn’t have “KFC makes a movie” on my 2020 bingo card, but here we are. What is happening,” while another one wrote: “LIFETIME IS RELEASING A HORNY KFC MOVIE STARRING MARIO LOPEZ AS COLONEL SANDERS I WILL NEVER RECOVER” This certainly isn’t the first time KFC has gotten attention for casting well-known figures as Colonel Sanders. Previously, country singer Reba McEntire was the first woman to portray Sanders, and they also tapped Seinfield actor Jason Alexander to play him—but some believe casting Lopez as the chicken chain’s founder as their “most ambitious effort to date.” Yum Brands, who owns KFC as well as Pizza Hut and Taco Bell, have become a master at viral marketing. And even in a year where anything can happen, they’ve still managed to surprise people. Earlier this year, KFC grabbed the internet’s attention for collaborating with Crocs to sell fried chicken-themed and scented clogs. Last month, Yum Brands’ Pizza Hut teamed up with Gravity and released an Original Pan Weighted Blanket which instantly sold out. 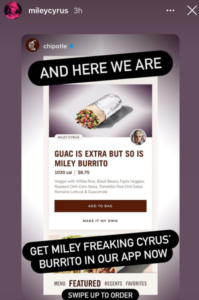 Thanks to TikTok, Chipotle Made a Miley Cyrus-Inspired Burrito on Short Notice

Earlier this week, fans on TikTok participated in a “If Miley Cyrus comments, I’ll do something” challenge—which, straightforwardly, involves users posting a video saying they’ll engage in outrageous tasks if the singer replies. Cyrus has responded to quite a few of them, influencing some major life decisions including shaving their head or getting married. Then Chipotle joined in on the challenge. On Wednesday, the brand shared a post (which garnered 189.9K views) that read “if miley cyrus comments we’ll make a miley burrito in our app”—and she responded. Now, the fast casual chain is offering the “Guac Is Extra But So Is Miley Burrito” inspired by her favorite order: a veggie-friendly burrito made up of guac, white rice, black beans, fajita vegetables, roasted chilli corn salsa, tomatoes, and romaine lettuce. It’s only available for a limited time, and customers can only order it through the Chipotle app or site. While celebrities collaborating with fast food brands isn’t a totally new concept, it’s certainly been especially popular in 2020. As a refresher: Dunkin’ partnered with Charli D’Amelio for a drink named after her, while McDonald’s teamed up with Travis Scott for a meal collaboration, which the fast food chain has said has saved them from a downturn in business during the pandemic. 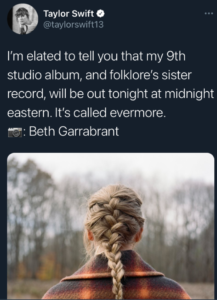 Taylor Swift Dropped A Surprise Album… Again!
On Thursday morning, Gen Z’s favorite singer Taylor Swift gave her fans an early Christmas present and announced on Twitter and Instagram—where her post received more than 3 million likes—that she was dropping her ninth studio album (and sister album to the cottagecore-laden folkore which only dropped five months ago) and a new music video. On a separate Twitter thread where she shared the track list for evermore, Swift wrote: “I also know this holiday season will be a lonely one for most of us and if there are any of you out there who turn to music to cope with missing loved ones the way I do, this is for you.” Swifties were quick to react, and created memes and theories around the newest album. Ahead of the premiere for “willow,” Swift jumped on YouTube to chat with her fans and answer questions about the album. And within just hours of launching, evermore quickly made it to the number one spot on iTunes’ sales charts for all-genre albums in the U.S—and “willow” is currently the number one song across the all-genre song sales chart. On YouTube, the single is currently the number one trending video with more than 5.8 million views (and growing). Of course, fans are “bowled over” and already in love with the album. It shouldn’t be surprising that evermore is quickly seeing success; when folklore came out in July, it became the first album to sell millions in 2020. The album broke records on Spotify and Swift was one of the most streamed artists on the platform. If there’s anything Swift has proven this year, she and her team know how to stay relevant with her young fanbase, displaying just why she’s taken the top spot as their favorite musician. While Evermore follows the same themes she displays in folklore, the overgrown moss, witchy attire, scenes full of casting spells, and darker tones seen in the “willow” music video straddle the line between cottagecore and goblincore. Even some brands are excited about the new album: Swift name dropped fast casual food chain Olive Garden is her song “no body, no crime (feat. HAIM)”—and they responded to a fan’s tweet with a classic quote from the film Legally Blonde. She’s certainly had a busy year in quarantine: Along with dropping two surprise hit albums, she released a folklore concert film on Disney+ last month, has been re-recording her older music, and just last week gave fans a tease of the new version of “Love Story,” which was featured in a viral Match.com commercial. Like Swift sings in “willow”: “I come back stronger than a ‘90s trend.” 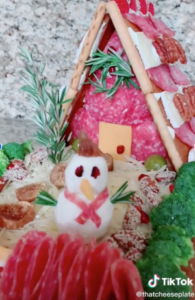 Earlier this year, we told you how cheese boards were having an unexpected moment on social media. Since then, they’ve been taking over Instagram and TikTok—and they’ve gotten an upgrade just in time for the holidays. Dubbed “hot chocolate charcuterie boards” by many, users have been filling their board full of the typical hot chocolate fillings like chocolate, whipped cream, and marshmallows—and even adding more fun treats like Christmas-themed cookies and mini cakes, peppermint park, candy canes. Hanukkah-themed charcuterie boards full of dreidel cookies, apple pie rugelach, and sufganiyot are also taking over on both social platforms as well. YPulse’s Winter Holiday Plans report found that 77% of 13-39-year-olds are planning to decorate for the holidays this year, while 62% say they plan on wearing holiday-themed clothes and accessories—and in this case, they’re decorating and dressing up their charcuterie boards. On TikTok, the hashtag #charcuterieboard has 199.5M views, while the same hashtag has generated thousands of posts on Instagram with many of the most recent entries being holiday-themed. Meanwhile, #charcuteriechalet (which has replaced gingerbread houses) has 232.4K views, while the same hashtag has again generated thousands of posts on Instagram. We told you how throughout the year, many young consumers were celebrating the holidays early as a way to cope with the pandemic—and with the holidays currently in full swing, it shouldn’t come as a surprise that these holiday-themed boards are so popular right now. 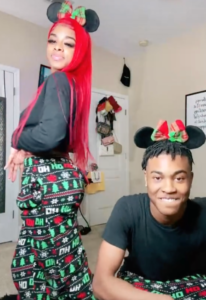 A “Here Comes Santa Claus” dance is trending on TikTok as users dress themselves in Christmas grab and “do a little jig.”

“Grease on Reese”: Celebrities created a silly holiday-themed meme inspired by Elf on a Shelf featuring themselves.

Apple’s large and “super expensive” AirPods Max are being mocked by the internet.