The Travis Scott meal (and merch collab) is selling out everywhere, Charli D’Amelio has created a Triller account, Patagonia is urging young people to “vote the a**holes out,” Paul Rudd wants Millennials to wear their masks—plus more stories and youth news to wrap up your week… 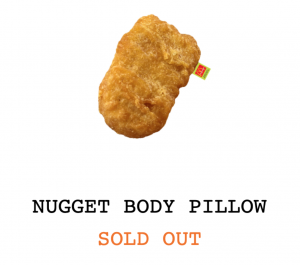 After a successful virtual concert on Fortnite in July, Travis Scott is trying his hand at the fast food industry—and young consumers are eating it up. (Sorry.) Earlier this month, McDonald’s teamed up with the rapper to serve up the “Travis Scott Meal,” which is $6 for a Quarter Pounder with Cheese, bacon and lettuce, a medium order of fries with BBQ for dipping, and a Sprite. Along with the combo meal, the food chain teamed up with Scott’s record label Cactus Jack for a merch drop that includes t-shirts, hoodies, shorts, sweatpants, lunchboxes, cereal boxes, cardboard cutouts of a Scott action figure, house slippers with fry laces, and a $90 nugget body pillow that people can’t stop talking about. Most of the items are already sold out, and the menu item itself has become so popular that it’s leading to a shortage in Quarter Pounder burgers. Of course, there’s also a TikTok trend about the meal that’s causing mild chaos for employees. Some customers have been sharing videos of themselves going through the restaurant drive-thru and ordering the meal by blasting Scott’s “Sicko Mode,” and the hashtag #travisscottmeal now has nearly 45 million views. Executives at McDonald’s even had to send memos to their franchise locations addressing the trend to avoid confusion, informing employees about “alternate ordering methods” like customers saying “Cactus Jack sent me,” “It’s lit, sickomode,” “The fornite guy burger,” or simply “You know why I am here” while playing the musician’s songs. Scott’s fans are even ripping promo posters directly off the restaurant’s windows to have a piece of the collab—and selling them for hundreds on ebay. One of a video of a poster thief has been viewed 2.2 million times, showing just how much viral content the Scott x McDonald’s partnership is creating. 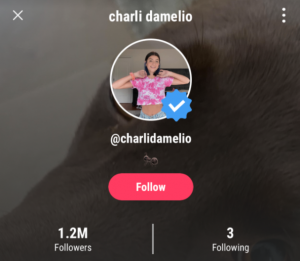 Charlie D’Amelio Is On Triller Now

In a surprise move, TikTok’s biggest star has joined rival app Triller. But before her TikTok followers fret: She’s not leaving the app that made her famous, just opening a Triller account to add to her many platforms. Charli D’Amelio currently has 87.5 million followers on TikTok, and she has accumulated 1 million followers on Triller since joining. The rest of her popular family, including her parents and sister Dixie, have created accounts as well. D’Amelio has shared three videos which each have garnered millions of views. Previously, Triller was able to convince TikTok stars Noah Beck and Josh Richards of Sway House to join, and Addison Rae is expected to come on as well. Despite the recent news of Oracle winning the bid for TikTok, influencers have been joining alternative platforms like Triller and Instagram Reels in an event that the app would become officially banned in the U.S. This morning, President Trump and the Department of Commerce announced this morning that the U.S. would start blocking new TikTok downloads as soon as Sunday. Though the “full ban” has been pushed back to November 12th, clearly some of the app’s biggest stars are making their back up plans. 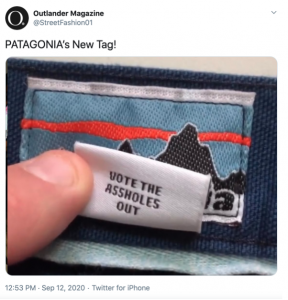 Patagonia Is Urging Young Voters to “Vote the A**holes Out”

YPulse’s Not Waiting For The World To Change trend report found that 75% of 13-39-year-olds like when brands encourage shoppers to vote. Patagonia is the latest one to do so—and their unique approach is going viral. In their newest line of shorts, the outerwear brand sewed this very blunt and straightforward message into the tags: “Vote the a**holes out.” Naturally, the suggestion has caught the attention of social media users. After online fashion blog Outlander Magazine shared a tweet (which received 12.5K retweets and 56.6K likes) with a photo of the tag, it became a trending topic on Twitter. According to the company, their CEO has been saying that phrase “for several years” in regard to politicians from any party who “deny or disregard the climate crisis and ignore science.” This isn’t the first time Patagonia has gotten involved in social and online activism. The brand was one of the first to participate in the Facebook boycott and paused their advertising in July as a stance against political misinformation being spread on the platform. 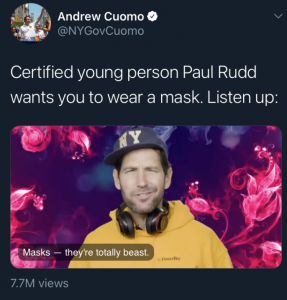 “Listen up, hypebeasts!” It’s no secret that since the start of the pandemic, divisiveness has continued to spread across the country about wearing face masks in public. And sure, while a majority of Gen Z and Millennials are actually taking COVID seriously (according to a new Harris poll, 79% of 16-23-year-olds are wearing a mask in public), health experts and politicians have been finding ways to reach those who aren’t. One way? By recruiting celebrities to get the word out. On Tuesday, New York’s Governor Andrew Cuomo shared a video of “certified young person” Paul Rudd (who is actually 51-years-old) in a PSA, which has a million views on YouTube and 7.7 million views on Twitter, urging “fellow Millennials” to wear their masks. In it, the Clueless and Ant-Man actor is donning yellow and baggy sweatpants and a hoodie (amongst other “young people gear”) and is using lingo (“Slide that in your DMs and Twitch it!”) to get his message across. He even receives a (fake) phone call from Gen Z-favorite singer Billie Eilish where they have a conversation about how she’s been wearing her mask too (“Man, I want to stan you. You’re so my bae!”) Though Rudd continues to joke throughout the video, it takes a slightly more serious turn when he highlights how “hundreds and thousands” of people are dying and ends by stating that wearing masks to prevent virus transmission is “science.” 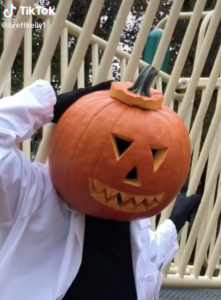 Halloween is almost here! TikTok users are getting into the spirit with the #pumpkinseason and #ghostphotoshoot hashtags, which have billions of views.

In honor of National Hispanic Heritage Month, Latinx users on TikTok are showing off their favorite family traditions, recipes, and culture through #FamiliaLatina.

TikTok users are hypnotizing themselves in a new trend to “see their past lives.”

And in #GlitchTok, users are convinced we’re living in a Matrix-style stimulation.

TikTok influencer Addison Rae has been cast as the star of Miramax’s “gender-swapped” remake of ‘90s romcom She’s All That.

In honor of the show’s 30th anniversary, young travelers can rent the mansion from The Fresh Prince of Bel-Air on Airbnb—for only $30 a night.

Billie Eilish is calling out influencers who are partying during the pandemic.

Kim Kardashian and several celebrities participated in a “freeze challenge” on Instagram and Facebook, but it’s getting “icy reactions” from followers.

Global internet star Baby Yoda is back in the trailer for season 2 of The Mandalorian—and of course, there’s already memes.

Western Europe
4 Brands Tapping TikTok to Reach Young Europeans
Having a TikTok marketing strategy is a must for brands trying to reach young Europ...
North America
We Need An American Girl Doll Who Is on The Viral List
TL;DR Instagram and TikTok are coming up with some wild American Girl doll...
North America
Just How Big Has TikTok Use Gotten Among Gen Z?
No other platform has won Gen Z over as completely as TikTok–and these are the late...