Trump just signed an executive order to ban TikTok, Instagram Reels is here and looking to take the top spot, a meme describes how everyone is feeling about the rest of 2020, and pandemic-themed movies and TV shows are a thing now—plus more stories and youth news you don’t want to miss out on this week… 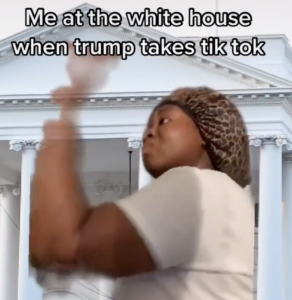 TikTok Gets an Executive Order Ban & Everyone Is Shocked

This morning, President Trump signed an executive order to ban TikTok in 45 days if the Chinese-owned app doesn’t sell its assets to a company in the U.S. The official news comes after weeks of speculation that the government was considering using their power to officially ban the platform. Though the general manager of TikTok North America originally promised that they are “not planning on going anywhere,” they announced this morning that they announced that they are “shocked” by the executive order. Not surprisingly, Gen Z is angry. As soon as Trump told reporters that he was thinking about banning the app, influencers (many of which have thousands and millions of followers) immediately went live bidding their fans goodbye and asking them to follow them elsewhere. Others have made plans to set up virtual private networks (VPNs) so they can still continue using it even if a ban were to go into effect. And of course, many of them started creating memes saying they’ll personally go to the White House to confront Trump. But it’s not just the users who are nervous. The entertainment and advertising industries, who’ve invested a lot of money in the app, have been anxious since the rumors started. In recent weeks, rumors have been swirling that U.S. companies are looking to buy the app from ByteDance to avoid a potential ban. As of now, Microsoft looks closest to a real buyer for the app. According to the New York Times, acquiring the app could up the cool factor with the tech giant among young consumers. 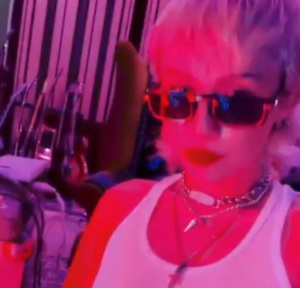 Amid the news of the TikTok ban, Instagram’s much anticipated rival Reels officially launched in the U.S. this week—and has already managed to own some viral content. YPulse found that if TikTok were officially banned in the U.S. that Instagram would be the top app users flock to instead. And well, it seems like a lot of celebrities and users are already on board. Gabrielle Union, Will Smith, Mindy Kaling, and Jessica Alba, are among the celebrities whose Reels videos have already accumulated thousands of views. And in less than 24 hours, it put Miley Cyrus’ new song “on the map” after she posted a teaser of “Midnight Sky” on the feature, bringing in millions of views on two separate clips. Similar to TikTok, users can click on the feature and scroll through the content—videos are only a few seconds long and users can set them to music, or to the sound of popular TV shows and movies. On Hulu and Netflix’s Instagram accounts, they’ve shared clips for followers to use under the “Reels” section, some of which are from popular teen shows like Riverdale and Never Have I Ever (each of which has millions of plays). Some challenges that have been popular on TikTok even seem to have migrated onto Reels. Eva Chen (who has 1.4 million followers and has been heavily using Reels), Instagram’s director of fashion partnerships, posted a video of herself and her daughter doing the “I’m Just a Kid” challenge, which originated on its rival. This morning, Facebook announced that it has rallied 5% following the launch. However, some social media experts are “doubtful” that Instagram Reels will overtake TikTok in popularity. And so far, some TikTok creators who have been trying to bring their followers to Instagram are facing an “uphill battle.” 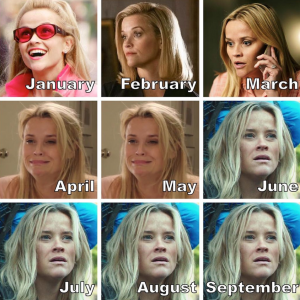 The #2020Challenge Is “Illustrating This Awful Year” So Far

This year certainly hasn’t gone the way anyone has expected, and young people have communicated it in the best way they can: through memes. At the end of March, a meme went viral for how users felt at the start of the pandemic compared to the beginning of April. Now, a new “2020 challenge” meme has been “illustrating this awful year” using celebrities in a range of emotional states. It all started when Reese Witherspoon posted a photo on Instagram (that has received more than a million likes) with squares representing the first nine months of the year, and each featuring a pic of her in various famous roles, cycling from happiness in “January” (ala Legally Blonde) to distress from June throughSeptember (lost in the woods in Wild).  Mindy Kaling, Kerry Washington, Drew Barrymore, Leonardo DiCaprio, and many other celebrities have participated in the trend. Of course brands are also jumping in, with Netflix and Hulu sharing versions featuring their popular series. Users have been using the hashtag #2020challenge to share their posts on the platform. This isn’t the first time a celebrity has gone viral for starting a meme: In January, Dolly Parton inspired the #SocialChallenge that quickly took off on the internet. 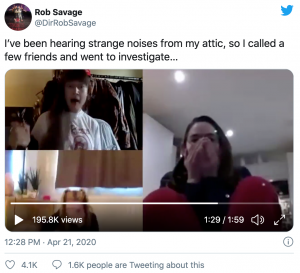 Shows set and about this time in history were inevitable, and they’ve begun to arrive. This week, HBO Max announced they will be airing Coastal Elites, a 90-minute special which was filmed this summer “under quarantine guidelines.” The series will star Bette Midler, Issa Rae, Kaitlyn Dever, Sarah Paulson, and Dan Levy. The satire highlights “five distinct points-of-view” across the U.S. during lockdown. Meanwhile, later this month Freeform is airing Love in the Time of Corona, a miniseries featuring “real-life” couples (like Hamilton’s Leslie Odom Jr. and Nic) and how they navigate relationships, dating, love, and break-ups in the middle of a pandemic and quarantines. The series was entirely remotely shot. Even MTV’s reality series Catfish is getting the pandemic treatment: The first episode of the new season, which was all-virtual, has reportedly generated one of the “most memorable arguments” in the show’s history. And of course, the horror genre has its own take on the pandemic and isolation: On horror streaming service Shudder (which according to AMC Networks has been “doing extraordinarily well” during lockdowns), cinematographer Rob Savage released Host, a movie that is an expansion of a prank he pulled on his friends on Zoom, and combines “the realities of technology, coronavirus, [and] escapist entertainment.” Thomas’ tweet from April, which shows the original prank, accrued 195.8K views and more than 4.1K likes. 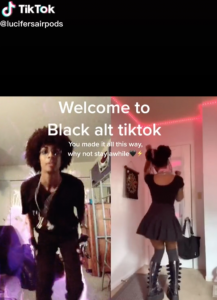 #AltTikTok is trending on the platform (with 2.8 billion views) as users showcase some underground and “unruly” songs—and major music labels are taking notice.

TikTok is turning Taylor Swift’s “Betty” into a “romcom” on the app.

Cardi B and Megan Thee Stallion just dropped a new song—and the music video has some surprise cameos.

Selena Gomez has a new “relatable” cooking show on HBOMax.

The U.S. Marshals are auctioning off seized, branded merch from the infamous Fyre Festival and people are bidding “hundreds” of dollars on it.