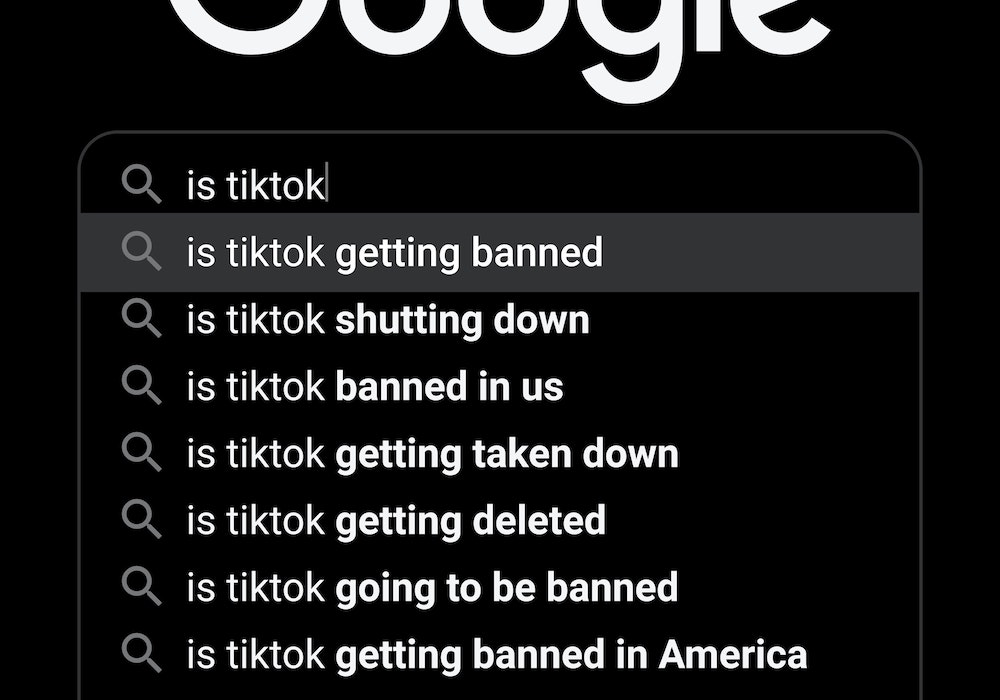 By now, you’re probably aware of the news swirling around about the potential ban of TikTok in the U.S. Headlines about the app over the last week have in large part been focused on security threats, how user data is handled, and its ties to China—and how organizations in the U.S. are questioning the app’s safety. India has already officially banned the app, and the U.S. government is reportedly looking closely at the platform and considering following suit. Companies are also beginning to take action. On Friday, Amazon sent an email to employees banning TikTok from company phones which they then said was sent in error. But Wells Fargo is asking their employees to uninstall the app, and the Army and Navy have both banned service members from using the app on government issued devices.

These company bans are building up the buzz that a ban in the U.S. is imminent—and Gen Z and Millennial users haven’t exactly been taking the news lightly. Last week, a glitch caused panic on the app when users reported that they were seeing “zero” likes on the posts. Though it was eventually fixed, speculation and rumors spread under the hashtag #tiktokshutdown that the glitch was linked to the recent news that it may be banned in the country.

To get a full picture of what a TikTok ban would mean to young consumers, we asked them ourselves. Using YPulse’s real-time data tool PULSE, we asked 16-34-year-olds to tell us what they really think about a ban, whether their data is safe with TikTok, and where they would go if they couldn’t use the app anymore. Here’s what we learned:

The majority of young consumers (67%) tell YPULSE that they think TikTok shares user information with the Chinese government. This is, of course, the primary reason that the ban is being threatened, though according to the Verge the app reports that “it stores American user data in the U.S.” Amazingly, when we asked this question of just TikTok users, 50% said that they believe the app shares user information with the Chinese government. Clearly, this potential security and privacy threat is not stopping them from using the app. And in fact, though most Gen Z and Millennials believe that TikTok shares user data, that doesn’t mean that they want it banned:

Our PULSE data shows that over half of 16-34-year-olds say that they would not support a TikTok ban, despite the majority believing the app shares user data. Of course, TikTok users feel even more strongly about keeping TikTok alive in the U.S.: 65% say they would not support a ban. When we asked these young users how they would feel about a TikTok ban in the U.S., annoyed and sad were the top responses. Many users have developed and fostered friendships on the platform. Especially during COVID, it became the breakout social network of the pandemic, and YPulse’s data shows that 52% of 13-18-year-olds are currently using it. When The New York Times asked creators and users about the potential ban, some said losing the app would “be like losing a little bit” of themselves. The hashtag #SaveTiktok has even gained traction on other social apps as young social media users have been showing support and solidarity with TikTokers.

When we asked how the ban would impact them, many TikTok users were effusive about the app’s ability to connect them with others. As one put it, “It would make me lose a fun platform that I’ve connected/made internet friends on,” and another user explained that they would lose “a positive community, amongst other things.” But users were perhaps most likely to say that without the app they would be bored, or “bored as f” in the words of one respondent. Some even said that a TikTok ban would mean they would spend less time on their phones, or that it would “change [their] daily schedule” because they use it so much.

However, the potential ban of the app has opened up opportunities for other companies who are vying for the spot to be the next TikTok. While users are protesting the ban, others have been posting on social media about moving to similar apps like Dubsmash or Vine successor Byte. So, who stands to win the most users in the wake of a TikTok ban? When we asked users what platform they would use if TikTok shut down, there was a clear leader:

Young TikTok users were most likely to say that they would use Instagram if TikTok shut down, leaving more similar competitors like Byte and Dubsmash in the dust. Instagram is already testing a new editing tool that imitates TikTok’s best features. The video-remix feature Reels will let users create 15-second videos and set them to music, which can be shared on Stories or a new “Top Reels” section of the Explore tab. Facebook’s attempt at a TikTok clone, Lasso, was built from scratch and marketed as a standalone product—and was shut down this month. But Instagram is hoping to steal from TikTok’s success by offering these tools to an established user base—and has had success borrowing features from competitors in the past. The feature was initially being tested in Brazil, but started testing in India after TikTok was banned there. According to our PULSE survey data, they have a good chance of showing the new feature off to former TikTokers if the app shuts down here as well.