Influencers Are Fleeing Cities During the COVID Crisis & People Aren’t Happy, on the Viral List

Influencers are receiving criticism for fleeing cities during the COVID-19 crisis, a boss turned herself into a potato during a virtual meeting, cooped up young people are recreating works of art using household items, and a meme is reflecting the effects of a weeks-long quarantine, and—plus more stories and youth news you shouldn’t miss this week… 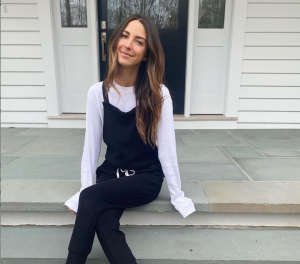 Influencers Fleeing Cities During the Outbreak Are Receiving Backlash

While some social media users have turned to influencers as a source of distraction and entertainment during this time, others have criticized them for using their wealth and privilege to relocate to rural areas and obtain tests for the virus, which has been difficult for most other people in the country. Doctors and public health experts have even warned that leaving metropolitan areas for smaller towns and documenting it on social media could lead to not only spreading the virus, but give young followers the wrong idea. While some mega-influencers like Kylie Jenner, Bella Hadid, and Chiara Ferragni have been using their platforms to encourage their young followers to stay at home and practice social distancing—multiple influencers have received heavy criticism this week for fleeing COVID-hotbed NYC for rural communities. Popular “mommy blogger” Naomi Davis shared a photo on Instagram, (which has received over 28K likes) of her children about to get into an RV that they would be using to “drive out west so we can have a little more space.” Shortly after, many of her 500,000 followers started criticizing her for “wreckless” behavior and violating quarantine. (She has since updated her caption to try to respond to the backlash.) Another influencer, Ali Maffuci, shared a similar post (which has since been removed) about her family’s decision to leave the metro area for their private home in Florida, generating the same kind of criticism. She later spoke out about her decision and why she stands by it. However, one of the influencers being criticized the most is Something Navy’s Arielle Charnas who, in mid-March, initially documented her process of getting tested for COVID-19 sparking a debate about medical privilege. At the end of the month, she announced that she fled the city with her children for the Hamptons, once again prompting a massive negative responses for the move. Charnas has now posted an apology that received more than 53K likes—and plenty of negative comments as well. 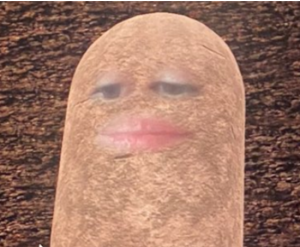 This Boss Turned Herself Into a Potato During a Virtual Meeting

Now that most employees are working from home (60% of employed Millennials tell YPulse they have started working remotely some or all of the time) and spending more time on video conference platforms, there’s bound to be technological mishaps. This week, one of those incidents went viral after a woman turned herself into a potato with a filter on a video conference and couldn’t figure out how to turn it off—so just stayed a potato for the meeting. On Monday, Twitter user @PettyClegg shared the hilarious news about her potato boss in a post that has received 935.2K likes (and counting). The “potato boss” responded on Twitter, with a post that got 11.6K likes, that she is “glad this is making folks laugh at this time.” She even gave a shoutout to Gen Z and Millennial-favorite musician Billie Eilish! Video services like Microsoft Teams, Google Hangouts, GoToMeeting, and most notably Zoom have become a major part of, and many users have been incorporating filters and virtual backgrounds to liven up meetings (or to avoid the embarrassment of a messy room). Brands like West Elm and Behr have created background collections for users to choose from, and production companies have brought their movie advertising to Zoom as theatrical premieres get postponed or moved to digital release. 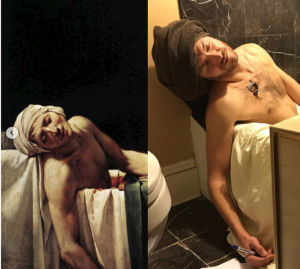 Bored Millennials Are Recreating Classic Works of Art at Home

With popular museums closed around the world, some are offering virtual tours while others are finding fun ways to reach people on social media. The Los Angeles-based Getty Museum posted a tweet that got 19.9K likes and 8.3K retweets—asking followers to recreate works of art with objects lying around the house. The results are both funny and creative: quarantined art enthusiasts are finding ways to keep themselves entertained while reinventing some of their favorite works of art—using household items like plastic bottles, old receipts, and a variety of other objects. Some even got their kids to participate. The idea to ask users to reinvent classic pieces was inspired by a similar challenge from The Rijksmuseum in Amsterdam as well as new Instagram accounts like Covid Classics—which was created by four bored roommates this week and has almost 65K followers. The art industry isn’t the only one that is getting the at-home treatment by quarantined young consumers. With the upcoming spring fashion shows cancelled, Instagrammers have been using the hashtag #HomeCouture—which has 17.K posts—to recreate previous popular looks using bedding, cardboard boxes, tissues, and more. 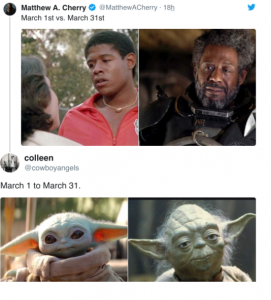 The March Meme Shows the Impact Quarantining Has on People

According to YPulse’s exclusive data, the pandemic has made many young consumers feel anxious—and this week, a Twitter meme perfectly embodies the toll they feel the month has taken on them. Users are posting pop culture images (like the already popular Baby Yoda) on the platform that contrast young and happy characters against their older or rugged counterparts, with the caption “March 1 vs. March 31″ or “March 1 vs. April 1.” Entertainment brands have been joining in using their own content, with Fox’s Family Guy-centric meme accumulating 1.1K likes, and Netflix’s photo of Adam Sandler from Uncut Gems received 7.4K likes. 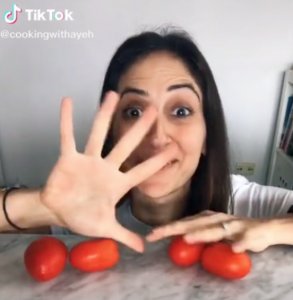 Quarantined young people are showing off their #quickrecipes on TikTok.

Other TikTokers are channeling their inner demons in the “What’s My Juul” makeup challenge.

Another TikTok video of a teacher mistaking a student’s Hydro Flask for vape during a virtual class is getting a lot of views.

Drake just dropped a new song—and of course, there’s already a TikTok dance to go along with it.

‘90s galore! The Backstreet Boys (virtually) reunited to sing their hit song “Want it That Way” to raise money for Coronavirus relief efforts.

The stars of 2011 outbreak film Contagion (which has become popular again due to current events) reunited to make a PSA about hand washing for COVID-19.

Justin Bieber canceled his summer tour due to the ongoing pandemic—and fans are heartbroken.

Lizzo donated meals to frontline medical workers across the country.

Kylie Jenner is partnering with Coty Inc. to donate hand sanitizer to hospitals in SoCal.

During a time when reality TV is thriving, YouTube Originals has finally set a premiere date for James Charles’ new show.

Speaking of reality shows: A TikToker created a fake scene of what it would be like if Coronavirus were to play a part in one.