TikTok’s biggest star lost over a million followers after a controversial video received backlash, Pizza Hut released a pizza-shaped weighted anxiety blanket that sold out immediately, a Sherwin-Williams employee was fired after his viral paint-mixing TikTok account was discovered, and users on TikTok can’t get enough of the Ratatouille musical—and more stories and youth news you shouldn’t miss this week… 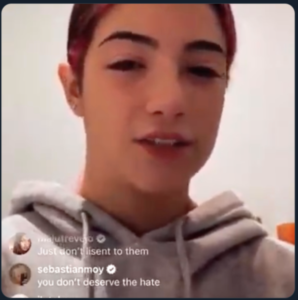 On Monday, the D’Amelio Family premiered the first episode of their YouTube series Dinner With The D’Amelios—and it did not go well. The concept of the series is the family inviting a mystery guest to come over and eat a meal that a chef prepares for them, and the first guest was close friend and fellow YouTuber James Charles. The episode has received more than 11 million views—but many of those viewers were not impressed with the D’Amelio sisters’ behavior. Viewers were quick to point out how “rude” Charli and Dixie were as throughout the video they appeared to treat the chef badly. Charli was seen making faces when Chef Aaron May was going through the plant-based options for her mother Heidi and at one point, asks if they have “dino nuggets” (instead of the gourmet prepared paella being served). Meanwhile, Dixie was also seen making faces and began making vomiting noises when she discovered there were snails in the paella. After throwing up outside, she returned and asked the chef why he would place snails in the food. Charli also pointed out how she hasn’t reached 100 million followers on TikTok yet (despite still being the most followed person on the app, and gaining 700,000 in just a few days), appearing to complain that she will not reach the 100 million mark a year after her one million milestone.  The video and the backlash led to Charli losing more than a million followers. However, it only escalated from there. The two reportedly started receiving violent and abusive messages, prompting them to respond to the incident on their social channels: On an Instagram livestream, Charli was seen crying and “tearfully apologized” to her followers, and said everything was “completely blown out of proportion.” Dixie shared a video on TikTok that received 26 million views to rectify the situation, which she also said was “ridiculously blown out of proportion.” Charles came to their defense on Twitter in a tweet that garnered 179.4K likes and 8.2K retweets, writing: “This Charli situation is NOT sitting right with me. 100M followers in one year & y’all expect her to know how to be a perfect role model? Death threats because she’s a picky eater & made a joke about a milestone? 30+ year olds dragging someone half their age? Feels familiar.” Meanwhile, NYTimes tech reporter Taylor Lorenz tweeted to her 197.1K followers: “If Charli D’Amelio was a boy none of this would be an issue. She’s a 16 year old girl held to an impossibly high standard and the entire internet wants to build her up and tear her down despite the fact she’s done nothing problematic. It’s heartbreaking to watch.” 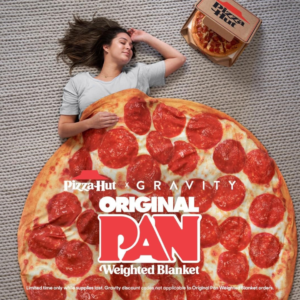 We told you about how food and bev brands can’t stop making merch—and how their products keep getting weirder. Now, Pizza Hut is the latest to jump aboard the weird marketing train. This week, the pizza chain teamed up with Gravity to unveil a limited-edition $150 Original Pan Weighted Blanket, which yes, looks like an actual pizza pie. Described as “luxurious” and “therapeutic and known to soothe anxiety and stress, the blanket is offered as a Queen and King size and weighs 151 pounds. The restaurant announced the news on social platforms like Twitter and Instagram, which each received thousands of likes, and within hours of dropping, the giant blanket sold out. Some of the comments on the posts demanded that the brand “make more,” so clearly their unexpected branded product was a hit. Along with creating weird and unique merch, many companies have been finding ways to support young people’s mental health especially as mental wellness becomes a major entertainment trend. Many brands have been finding ways to shift their marketing and messaging to turn everything into a “mental wellness product.” 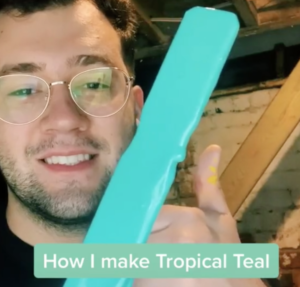 Sherwin-Williams Fired This Employee After He Went Viral on TikTok

This week BuzzFeed reported that, TikTok user and Ohio University senior Tony Piloseno (who goes as @tonesterpaints on TikTok and has 1.3 million followers) was fired from his part-time job at Sherwin-Williams when the company found out about his popular paint-mixing account. In recent months, paint-mixing has become a popular on social media trend as TikTokers have taken to watching the soothing videos and guessing what colors the paint will end up as. For months, Piloseno said he’d been “pointing to his viral account” as an example that the paint brand could do on social media and “marketing their brand to a younger audience.” According to BuzzFeed News, Sherwin-Williams reportedly terminated him for making the “videos during [his] working hours” and with company equipment. They also cited “gross misconduct,” “wasting properties [and] facilities,” and “seriously embarrass[ing] the Company or its products.” They even accused him of stealing paint, but Piloseno says he had been using the employee discount to make his own purchases. Though the firing occurred this summer, the paint company told BuzzFeed News this week that a “customer’s concerns” is what allegedly launched their investigation into Piloseno’s account. However, despite his firing, Piloseno continued to shoot paint-mixing videos in a friend’s basement with paint he bought from Lowe’s. Clearly, Sherwin-Williams didn’t get the memo on how many retailers have been working hard to get their employees to go viral on TikTok to create a more favorable image for their brands and “creat[e] a sense of intimacy with viewers.” 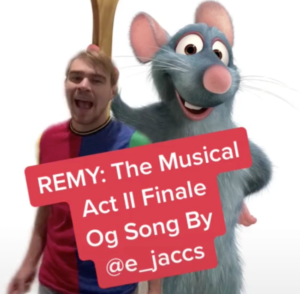 Musical theater TikTokers are at it again—making their own home grown musicals on the platform, this time for Pixar’s Ratatouille. It started in August, when user Em Jaccs (@e__jaccs) uploaded an ode to Remy (the protagonist rat in the movie) on her channel, which received 658K likes. In it, she’s heard singing the lyrics: “Remy, the Ratatouille, the rat of all my dreams. I praise you, oh Ratatouille, may the world remember your name.” The video reached Daniel Mertzlufft (@danieljmertzlufft)—the user behind the viral “grocery store” musical which cleverly used the app’s popular Duet feature—who revamped it into a “big musical number” on his channel. His video received 1.3 million views and has since inspired other users to make their own contributions to the “Ratatouille the Musical project.” Many of them have used Mertzlufft’s audio as a backing track to their own video, doing everything from adding choreography or creating a Playbill for the musical. 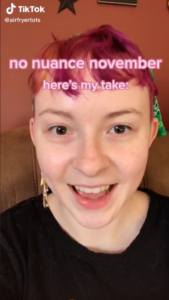 #NoNuanceNovember is trending on TikTok with 81.7 million views as users share their hot takes and opinions with no context.

Former President Barack Obama surprised popular twin YouTubers while they were listening to his playlist.

Megan Thee Stallion dropped her debut album and debuted a clothing collection with Fashion Nova that brought in $1.2 million in just 24 hours—all in one week.

The “This claim is disputed” meme is taking over Twitter—and brands like Oreo and Burger King are having a lot of fun with it.

Meanwhile, users have a lot of feelings about Twitter’s new “Fleets” feature.

The internet is making “vaccine memes” about Pfizer and Moderna.

A 2011 banned horror film Megan is Missing has gotten newfound attention after going viral on TikTok—and its director was forced to issue a warning.

Move aside, Baby Yoda—fans are obsessed with the Frog Lady in the newest season of Disney+’s The Mandalorian.