Cooped up gamers can’t get enough of Animal Crossing: New Horizons, quarantined parents are dancing on TikTok with their kids, Popeye’s wants to share its Netflix password with self-isolating consumers, and Conan Gray is the musician Gen Z loves at the moment—plus more stories and youth news you shouldn’t miss this week… 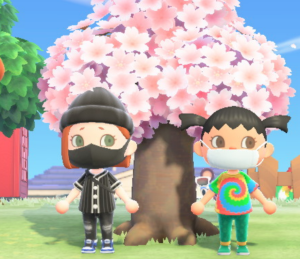 When Nintendo released Animal Crossing: New Horizons over the weekend, they couldn’t have done it at a better time. With young people cooped up indoors, they’ve turned to video games for entertainment—which saw a 75% increase in the last week. The game is already being projected as Nintendo Switch’s most successful launch yet—and on top of that, the consoles are selling out everywhere. While the number for U.S. sales are unavailable, it’s already broken records in Japan by selling 1.88 million copies in its first three days. The life simulation video game, which allows users to customize their characters while interacting with other players, has already inspired several memes. Many players are even getting creative: cinephiles are making their characters replicate their favorite films, others are mimicking the real-life pandemic by having them wear medical masks (especially since some gamers are “sneezing” on each other), and some are even “hanging out” with their friends by hosting weddings and graduation ceremonies since they can’t in real life. It’s safe to say video games really are having a moment: Pokémon Go recently modified it’s format to make it easier for users to play it at home, prompting spending to jump 67%, while Electronic Arts is making their popular simulation game The Sims 4 available for only $5 and partnering with Snapchat to release an AR lens so users can play with their pets. 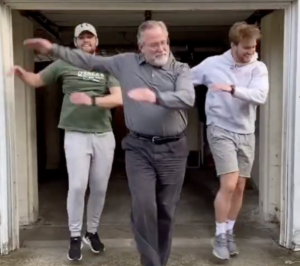 TikTok is already having a huge week with the launch of its #HappyAtHome nightly programming block and Charli D’Amelio debuting her charitable #distancedance challenge. But perhaps one of the biggest quarantine trends on the app is the surge of bored parents joining it to dance with their children. One particular video that has been blowing up the internet (with 9.3 million views) features a dad from Kentucky dancing with his two sons to the “Blinding Lights” Challenge (featuring The Weeknd’s hit song of the same name)—which many have flocked to the app to do. As parents work from home and kids have to do their schooling remotely, being together at home has become the new normal during this time, and many families are attempting to adjust while finding different ways to keep themselves occupied—and the massively popular Gen Z app might just be one of the solutions to that. 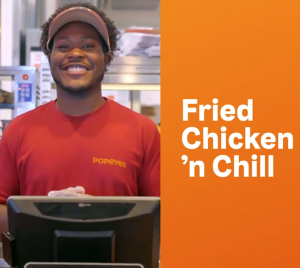 Popeyes rolled out a social media campaign that will share the brand’s login details for its Netflix account with select fans. With their “Fried Chicken N Chill” campaign, they’re asking Twitter followers to post a photo of themselves enjoying Popeyes’ food with the hashtag #ThatPasswordFromPopeyes. The first 1,000 posters recieved a message from the fast food chain containing the username and password for its streaming account. The instructional video, featuring restaurant employees explain, has received 1.3 million views and 2.9K likes on Twitter. Many brands are finding ways to help young consumers cope with Coronavirus by promoting social distancing or offering their services for free—and in this case, it’s the restaurant’s Netflix login details to target young consumers who are spending most of their free time streaming content. Of course, between their infamous Twitter fight with Chick-fil-a and their Family Feud consolation prize, Popeyes isn’t new to clever marketing and viral campaigns. 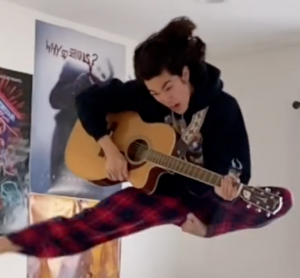 Conan Gray is the Latest Musician Gen Z is Obsessed With

When Conan Gray emerged on YouTube in 2014, he was immediately noticed for his sad pop songs. Slowly, he became a superstar among the under-25 crowd who appreciate him for his vulnerability both on social media and through his songwriting. Paper Magazine even referred to him as the “renaissance painting of Gen Z.” Now, the 21-year-old is one of the most streamed artists on Spotify with his single “Maniac” accumulating over 90 million streams on the platform alone. His debut studio album Kid Krow, which came out last Friday, was unfortunately timed with the pandemic and instead of doing a press tour, he ended up promoting his new music digitally. On TikTok, the singer posted a video of himself in self-isolation (which has received 645K views and 227.8K likes) with the caption “when ur whole entire debut album release week is cancelled bcuz of c*rona so u gotta celebrate alone in ur house in between ur breakdowns” while his songs played in the background. But that hasn’t stopped fans from buying and listening to Kid Krow: some of them feel like the album is what is “getting [them] through quarantine.” On Instagram Stories, Taylor Swift (another Gen Z-favorite musician) praised Gray’s new album and he responded on Twitter with a post—that got 7.8K retweets and 51.6K likes—thanking her for being his “lifelong songwriting inspiration and icon.” 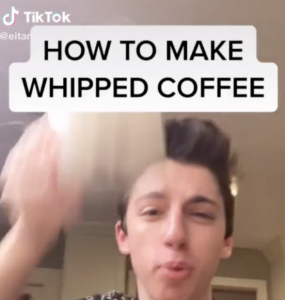 #whippedcoffee is trending on TikTok as teens show off their barista and coffee making skills at home while quarantined.

There’s a mysterious “until tomorrow” challenge taking over Instagram, but what does it mean?

Netflix is renewing Love is Blind, The Circle, and other now beloved reality show favorites.

…And Tiger King is the latest Netflix docuseries viewers (and celebs) can’t get enough of.

The full conversation from Taylor Swift and Kanye West’s infamous 2016 phone call leaked online, and it’s causing a lot of drama—but fans are thankful for the distraction.

Britney Spears is called for a redistribution of wealth and general strike on Instagram during Coronavirus—and followers are rallying behind the popstar.

Lady Gaga is postponing the release of her Chromatica album—and revealed that she was supposed to have a surprise set at Coachella.

Kylie Jenner and Rihanna are donating millions of dollars toward Coronavirus relief efforts.