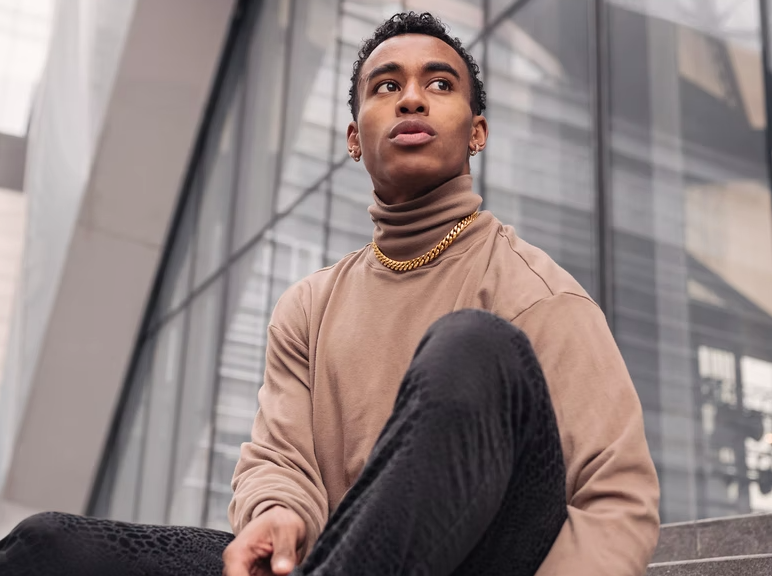 There’s a lot of clothing brands out there, but our brand tracker reveals which ones young consumers think are the coolest…

There are plenty of reasons why young consumers favor a brand—but having a cool factor is definitely one of them. This is arguably especially true in the fashion and apparel space, where trends can tear generations apart, and bring brands back from the dead. Being considered cool by Gen Z and Millennials can be a huge boon to fashion brands’ sales—so who’s leading the pack these days?

YPulse’s brand data tracker monitors everything from which brands Gen Z and Millennials, including what brands reflect diversity, make the world better, and, yes, which they think are cool. Our brand tracker, which is available to Pro subscribers, measures 13-39-year-olds’ affinity for over 400 brands in North America (and over 800 in Western Europe) across 20 distinct diagnostics. Today, we dug into the data to determine which fashion and apparel brands have the highest “cool” ratings among young consumers right now. Here are the top 15: 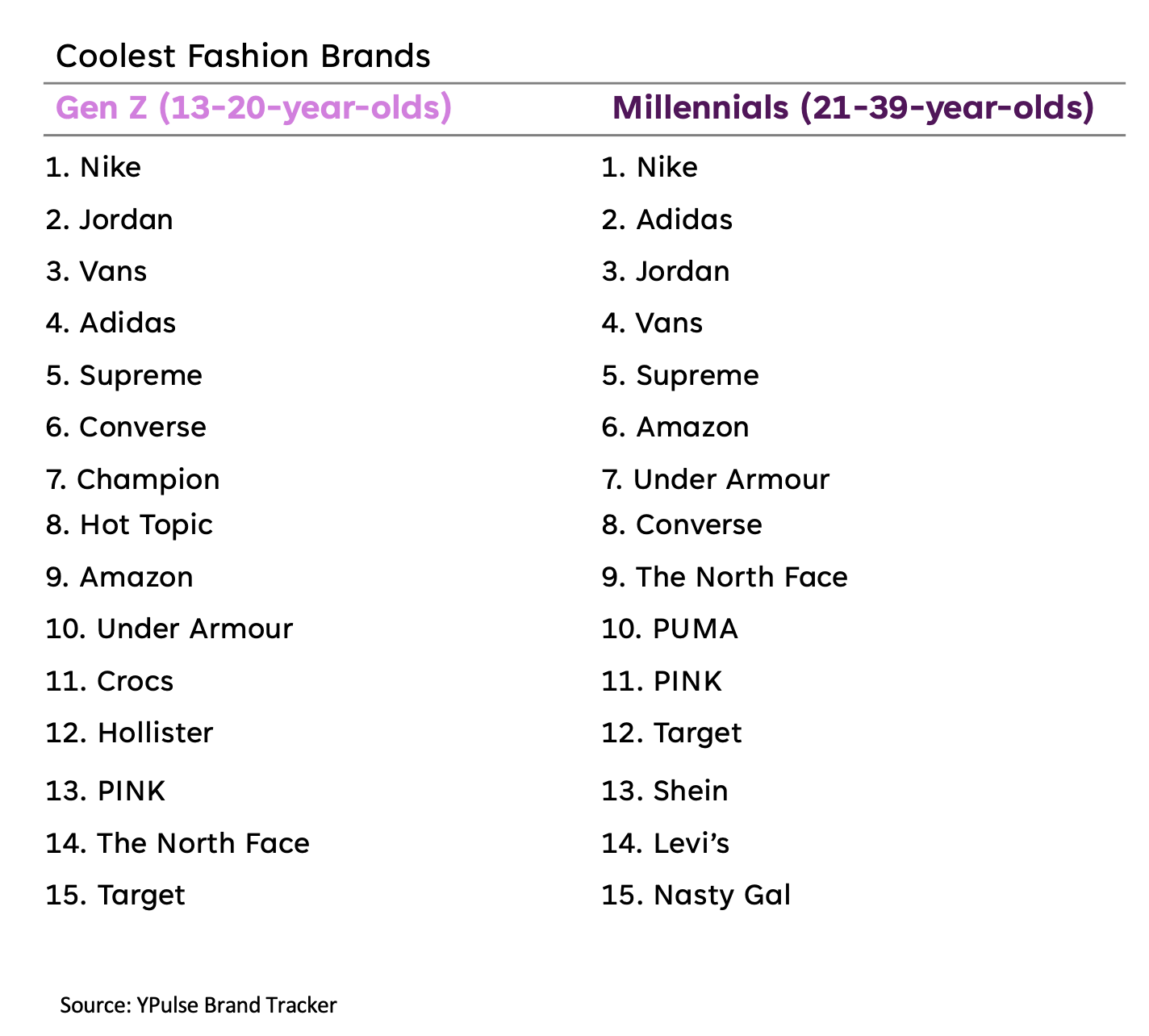 Once again, Nike takes the top spot as the brand both Gen Z and Millennials rate as coolest. They’ve maintained this position for years, and is also a top brand for winning BIPOC young consumers’ affinity, so this certainly isn’t the first time we’ve broken down the reasoning behind their coolness. The continued prominence of athleisure and streetwear are certainly keeping the brand popular, as is their tried and true use of beloved athletes and other stars as spokespeople. But among many other things, Nike’s continued support for social movements like Black Lives Matter and young athletes of color like Sha’Carri Richardson and Naomi Osaka makes them cool in young people’s eyes. Gen Z especially wants brands to take a stand on the important issues that matter to them, and Nike has never shied away from the challenge.

You’ll notice that there isn’t much of a difference between the top five brands that Gen Z and Millennials are most likely to rate as cool, with Jordan, Adidas, Vans, and Supreme taking up the top five spots for both generations. Jordan, Adidas, and Vans were also in the top spots in 2020, but Supreme has seen a spike in cool scores among both generations. Supreme is the OG example of a brand redefining high fashion for young generations through limited-edition collabs and branded products both within and outside of apparel, and the tactics are keeping them cool in Gen Z and Millennials’ eyes.

But more interesting than the similarities between the cool rankings for both generations are the differences. Millennials’ ranking includes Shein, which doesn’t make the top 15 ranking among Gen Z. But don’t take Shein’s absence from Gen Z’s ranking as a sign that the younger demo doesn’t like the brand: among females only, Shein ranks fourth for Gen Z and sixth for Millennials, showing its popularity among young women as a whole. When we asked them where their favorite places to shop for clothes are in our recent fashion preferences and style report, it appeared in both generations’ top rankings, and took the number one spot for Gen Z. We already broke down the brand’s massive success in the last year, but it’s certainly hard to ignore: According to Earnest Research, Shein has become one of the top trafficked sites across all fashion and apparel sites worldwide—a spot formerly held by Nike and H&M. The data shows that the brand has doubled its fast fashion sales, jumping from 13% at the beginning of the year to 28% as of June. Meanwhile, analytics firm App Annie found that the retailer surpassed Amazon as the most downloaded iPhone shopping app in the U.S. in May. Sensor Tower notes that the features Shein is constantly adding—including new videos on product pages, sorting features for flash sales, and clothing categories organized by fashion trends—are responsible for their ability to stay relevant with young consumers who are looking for affordability and trendy apparel (like “cottagecore,” Y2K aesthetics, and more). It is currently the most-mentioned brand on TikTok, and the hashtag #shein has a whopping 16.2 billion views. And the brand hasn’t ignored that growth either: Building on their success, they’ve started coming up with ways to generate excitement for the brand like creating a reality competition show with big-name fashion designers and celebs like Christian Siriano and Khloé Kardashian. So, it’s no surprise either that Millennials consider it one of the coolest brands.

Meanwhile, Crocs, which is new to the coolest brand rankings this year, made Gen Z’s rankings, but not Millennials. YPulse’s Cult of Ugly trend report explored how young people have increasingly been leaning toward less-than- perfect fashion to align with their love for all things authentic, with 69% of 13-39-year-olds telling us that it’s now cool to wear something that was once considered ugly—and Crocs is one of the brands leading the “ugly” trend. They have done a lot in the last year to stay relevant with young customers, launching an array of limited edition drops with celebrities and other big brands. Their collabs with Post Malone, Bad Bunny, Nicki Minaj, and Justin Bieber all sold out within just a matter of hours. Gen Z and Millennial-favorite musician Ariana Grande is also a regular wearer of the shoes. Earlier this year, they teamed up with Saweetie and Hidden Valley Ranch for a pair of “a pair of speckled green and off-white colored classic clogs that look just like a bowl of creamy ranch dressing,” and who could forget the fried chicken-scented and Lightning McQueen-themed clogs that practically broke their site? To get even more of young shoppers’ attention, they’ve also leaned into the secondhand trend by joining ThredUp’s Resale-as-a-Service (RaaS) to give customers the opportunity to send back old clothes and accessories for Crocs credit.

Another brand that appears in the top rankings for Gen Z but not Millennials is Hollister. The brand also appeared in the younger group’s ranking last year, there’s many reasons why they’ve maintained staying in the top spot. We’ve already told you about how collaborating celebs and influencers can quickly make a young fan a loyal customer—and last year, the brand partnered with not only one, but two of Gen Z’s favorite influencers: Charli and Dixie D’Amelio. They first enlisted the sisters to be the face of their back to school campaign—along with Noah Pugliano and Bill Nye—to be “jeanealogists” and create an accompanying #MoreHappyDenimDance challenge and original song. And of course, you already know how much young users love their viral dance trends. Second, they collaborated with the duo again for the brand’s new gender neutral Social Tourist sub-brand, which feature gender-inclusive pieces, swimwear, skirts, dresses, everyday basics, and limited-edition pieces inspired by the sisters’ personal styles. The two were reportedly at the end of the product selection, design, and branding decisions to ensure their personalities, and experiences as content creators, are the lifeline of the sub-brand. Our Gender Blur trend research found that nearly half of 13-39-year-olds have bought clothing that is gender neutral, while over a quarter are interested in doing so. Meanwhile, iHollister has also leaned into gaming by ramping up their esports strategy. In October, they named their first-ever “gaming scout”—Fortnite World Cup champion Kyle “Bugha” Giersdorf—to help select talent for Team Hollister, a new gaming training program kicking off this month with Twitch. The program features a series of livestreamed training sessions (including a charity livestream on Giving Tuesday), and each streamer will score a $10,000 sponsorship from the brand and mentorship from Bugha. The brand also dropped a limited-edition sweat set, which includes sweats with massive pockets that encourages snacking while streaming, a roomy hood to fit a gaming headset, and an emblem of Bugha’s pug Zoey on the hoodie along with a message in more code that reads “Code Bugha” on the sleeve.

From championing causes to focusing on fast-moving trends and taking over TikTok  to embracing gender-neutral styles, there are many ways that brands can win cool cred with these generations, but it can be difficult to dethrone some of the top brands who have owned this game for some time.

*The YPulse brand tracker measures young consumers’ relationships with a brand based on a weighted 6-point scale, ranging from “Never heard of this brand” to “This brand is one of my favorites.” As part of the “Brand Personality” metric, we also ask respondents “Which of the following are cool?” These are the top clothing/apparel brands that were rated “cool,”  among those who are aware of the brand. The brands on this list are among the fashion and apparel brands included in the brand tracker as of 11/2021. Rankings are subject to change as brands are added and removed.