All the Ways Gen Z Is Bringing Back The 2000s

The 2000s are being revived, as Gen Z brings back styles and accessories you might have thought were gone forever…

A year ago, we predicted the 2000s would be making a comeback thanks to Gen Z’s nostalgia for their own childhoods, and the last year has shown that they can’t get enough of everything Y2K . In 2020, we reported that teens were creating TikTok videos paying homage to the decade, with 2000s hashtags earning millions of views. Now, #2000s has 2.2 billion views and #2000sthrowback has 1.6 billion views. This kind of content has only gotten more popular—and more specific as well. Recently, the hashtag #2014aesthetic trended, earning 1.5 million views on TikTok as users share “POV videos” of themselves dancing to songs by bands like the Arctic Monkeys or 5SOS concerts, wear high-waisted Levi shorts, oversized sweatshirts, and don dyed hair and nose piercings. Dance trends like the Bop or Not challenge where users “rate 2010s indie pop coming-of-age songs” from brands like Matt & Kim, Phoenix, and M83 have taken over the app since the beginning of quarantines as well. Nostalgia entertainment isn’t going away anytime soon either as more cable networks streaming services like Paramount+ revive and expand popular 2000s series like Avatar: The Last Airbender and The Legend of Korra.

But it’s not just 2000s hashtags, songs, and media that are trending and being revisited because of Gen Z’s nostalgia—they’re also reviving styles and products that some people thought they would never see again. Here are some of the items getting a revival:

Y2K-era makeup
We told you how young people have been bringing back Y2K-inspired fashion (hello, Von Dutch trucker hats) during lockdowns. Pop stars have been helping fuel the ‘00s trend as well: Dua Lipa, Ariana Grande, and Kacey Musgraves have all been seen sporting miniskirts, scrunchies, Claire’s shop-esque colorful accessories, hair tinsel, and other Y2K-era inspo in their music videos. Now 2000s makeup is coming back too, Glossy reports that older brands have been reviving their classic products from the era, while newer startups are collaborating with partners to “evoke the feeling of the time period.” Ulta Beauty launched “throwback” gift sets that included a “sparkly” Caboodles case full of makeup, a mini backpack with Lancôme’s recently revived Juicy Tubes lip gloss, and a Lip Smacker gift set in a boom box packaging. Meanwhile, brands like KNC Beauty, Wldkat, and Topicals have been resharing screenshots of ‘90s and ‘00s pop culture content (think Mean Girls, Lizzie McGuire, Legally Blonde, and Destiny’s Child) on their social channels.  And in a totally meta move, makeup inspired by the late ‘90s and ‘00s has also recently been on the rage: Hot Topic and Blockbuster recently collaborated for an eyeshadow palette with shades named after rental categories like “horror” and “comedy.” 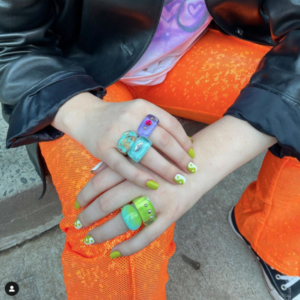 Colorful “Kiddie” Jewelry
Reminiscent of the type of plastic chunky, beaded accessories and childlike charms that used to fill the childhood bedrooms of Gen Z and Millennials, colorful jewelry and “kiddie kitsch” are taking over TikTok and Instagram. Bright resin and lucite rings in various colors and sizes have been spotted lined across users’ fingers, and celebrities like Bella Hadid, Miley Cyrus, and Dua Lipa are “propelling the statement.” Earlier this week, Lyst reported that interest in plastic rings has risen since last month. Searches for “resin rings” are up 28% month-on-month, while words like “chunky” and “bold” are the most frequently used. The term “colorful rings” is also spiking, with page views for the keyword up 19% since the beginning of February with colors like neon green, hot pink, and yellow being the most sought after. On TikTok, the hashtag #resinrings has 5.6 million views, #plasticrings has more than 200K views, and #clayrings has 14.6 million views. Many shops, like Here Nor There in NYC or Julia Copeland’s store, have been offering “a variety of reworked vintage” that young shoppers are snatching up, while others have gone on eBay and other resale online sites like Depop to find pieces. Meanwhile, Sillybandz are getting their chance at a revival too. The iconic, colorful bracelets from the 2000s are being relaunched by TikTok collective Sway House. Especially popular during the 2010s, they typically came in packs of 24 and were sold according to different themes like animals, holidays, or celebrities like the Kardashians and Justin Bieber—and when they weren’t being worn on the wrist, they reverted to their original shapes. TikTok content creator collective Sway House (a.k.a Sway LA) are investing and planning a relaunch of the well-known silicone rubber bracelets, as Gen Z continues their obsession with all things Y2K-era. 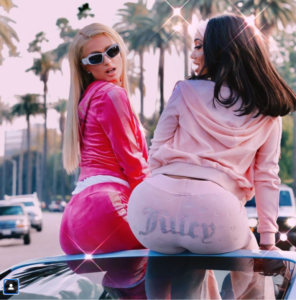 Velour Tracksuits
A track suit revival was one of the first fashion signs of the 2000s revival, and the brands who first made the styles trend are cashing in. The resurfaced interest in velour tracksuits is also in part thanks to Kim Kardashian who recreated a 2006 photo with Paris Hilton to promote her own Skims brand tracksuits. Following the news that Kardashian and Hilton were teaming up to launch a velour line, Lyst reported that searches for velour tracksuits spiked 54% compared to the previous week, and searches for the term “velvet sweatpants” increased 80%. But according to Lyst, the most-wanted styles are from Juicy Couture, which is celebrating its 25th anniversary later this year. Known for their velour tracksuits, Juicy Couture was super-hot during the 2000s and, they relaunched their ecommerce site last month with new styles and “an improved user experience.” While Juicy was popular with Millennials in their youth, they’re now hoping to reach Gen Z. During the relaunch, they’ve centered their paid marketing on Instagram and TikTok, but are also staying on Facebook to reach the “legacy customer.” They also have an advantage relaunching during the pandemic: Young shoppers have been fueling the loungewear and athleisure industry. Meanwhile, thanks to Gen Z, “flared leggings” (or “yoga pants” if you consider yourself a Millennial) are also back in style. Models and influencers like Kaia Gerber and Emma Chamberlain have been all over social media donning styles from brands like Lululemon and Bleusalt. 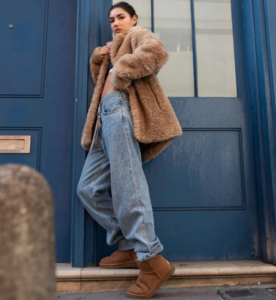 Uggs (& Other Ugly, Comfy Footwear)
Uggs were massively popular during the early 2000s before momentarily losing their luster. But because of young people’s resurged interest in ugly fashion (YPulse’s Cult of Ugly trend report found that 70% of 13-36-year-olds say that it’s now cool to wear clothing that was once considered ugly), and thanks to a complete brand reinvention, the company has made a surprising yet “totally predictable” comeback and is “cool again” among young shoppers. They’ve relied on a slate of celebrity collaborations and partnerships with young designers, and “the totally unexpected nature of the collaborations continues to keep the brand relevant.” The wave of nostalgia has also helped put them back in closets. Meanwhile, Crocs has seen a resurgence during lockdowns as well and has “became a pandemic staple” but the company is “optimistic” that their popularity will continue to stick around even after the pandemic has passed. Overall, during the pandemic, Gen Z and Millennials have been trading in “hyped-up sneakers” for the practical, comfy walking shoes their grandparents usually wear. Young people have started prioritizing comfort over “presentability or panache.” During lockdowns, many have opted for more comfortable clothing like loungewear and athleisure—and they want comfy feet as well. Previously dubbed ugly by most young wearers, practical walking shoe brands like Merrell’s Jungle Moc, Keen’s “springy, elasticized” Uneek sandal, and the “extremely gray” Journey Mesh by San Antonio Shoemakers, are being “co-opted by spry 20- and 30-somethings.”