Bringing back the shows and movies of Millennials’, and now Gen Z’s, childhoods is big business—and here’s why the trend is not going away anytime soon…

This July, Hulu announced plans to add “every single episode” of the classic ‘90s TGIF TV lineup that so many Millennials remember from growing up: Full House, Family Matters, Step by Step, Perfect Strangers, and Hangin’ with Mr. Cooper. The series started streaming exclusively on the site in September, right after Netflix debuted Fuller House for its 30th anniversary. Fuller House, of course, being one of Netflix’s great ploys to appeal to the generation’s nostalgia. The site has rebooted several shows that have their origins in the glossy ‘90s and ‘00s, most notably bringing back the casts of Full House and Gilmore Girls for what essentially amount to continuations of the original series. According to Netflix, these are the two most popular original shows among “binge racers”—viewers who watch the entire season as soon as it’s released on the site. Ypulse’s own research found that Friends, Full House, and Gilmore Girls are the most popular to watch among the 65% of 13-33-year-olds who say that they are binge watching shows that are no longer on TV that they never had the chance to watch, and the 62% of 13-33-year-olds who are binge watching shows that are no longer on TV that they used to love. According to Kidscreen, Netflix is continuing to revive ‘90s classics to capture nostalgic Millennial parents and their kids in one go—with reboots of Carmen Sandiego and The Magic Schoolbus both in the works.

These streaming stories are just the tip of the iceberg when it comes to nostalgia entertainment these days. We’re living in what feels like peak reboot era, with shows like Will & Grace back on the air and revisits of modern classics like Roseanne also in the works. Will & Grace, incidentally, was near the top of the list of “new” shows that Millennials and Gen Z were excited to watch this TV season—and their nostalgia is the clear reason why. Of course, it’s not just TV shows. Yesterday we reported on the nostalgic tradition that Millennials just can’t quit—and it’s a Halloween movie from their beloved ‘90s. Hocus Pocus, Space Jam, and Saved by the Bell are reportedly even still popular costume picks for nostalgic trick-or-treaters (or their Millennial parents).

It seems that every week brings news of another beloved ‘80s, ‘90s, or early 2000s show or movie that’s being dusted off and brought back to life—in much-marketed streaming reruns, reboots, and remakes. But is it nostalgia entertainment overload? Looking at our data on Millennials and Gen Z, it doesn’t look like it.

In 2014, we explored the appeal of nostalgia viewing, looking at the reasons behind young viewers’ love of childhood content, and found that the number one reason that they love watching shows and movies from their (comparative) youth is that they just want to be kids again. Some Millennials explained, “It was my childhood,” while others mentioned the decade being simpler, and more innocent. But the (mostly) unspoken sub-text of these statements was their desire to have some of that time back—and 68% of 13-35-year-olds currently tell us they wish they could go back to being a kid. In our most recent survey on TV and entertainment, we re-asked some more questions about nostalgia viewing, and the responses we got indicate that the trend isn’t going anywhere anytime soon. 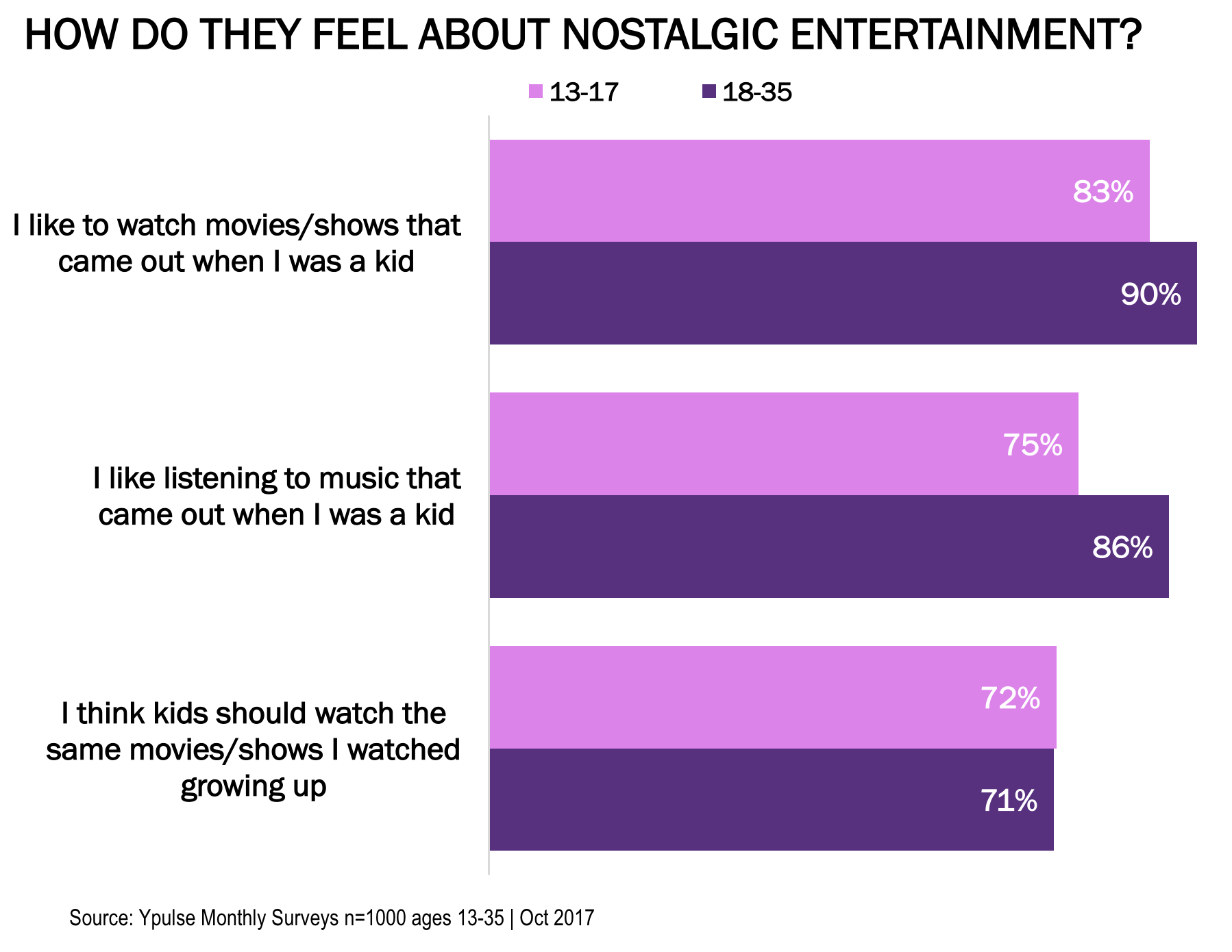 The majority of Gen Z and Millennial consumers tell us they like to watch movies, shows, and music that came out when they were kids. In fact, comparing this recent data to the responses we received in 2014, their interest in nostalgic entertainment hasn’t faded a bit. Neither has their belief that kids today should watch the same shows and movies that they did.

This continued interest is clearly behind networks’ continued commitment to bringing back old shows. MTV has made the decision to revive everything from Unplugged to TRL to Beach House and Cribs in an effort to draw in young viewers. Disney has rebooted Duck Tales, the Mickey Mouse Club, and even has a revival of ‘90s camp docuseries Bug Juice in the works. But the success of these shows depends on several factors. First, the original show has to have proven it has a long shelf life. One might argue that Netflix has had such success rebooting nostalgic content because they know exactly what old shows viewers are still watching and binging. Second, the quality of the rebooted content needs to be strong to live up to the memories and high expectations of the devoted audiences, who do not want to see their favorite shows brought back in a way that doesn’t jibe with their original experience. (And living up to those memories is no small feat.) Lastly, and it might seem obvious but we’ll say it anyway, the intended audience needs to have a strong connection to the original content. Rebooting a niche or short lived ‘90s show to reach Gen Z is not the path to a guaranteed hit—because they might not even remember the show in the first place.

The exception to the above statement is of course when kids’ shows are brought back specifically to appeal to Millennial parents—as Netflix has done with many of their children’s programming efforts. According to our research, Millennial parents are even more likely than Millennial non-parents to want to watch the content of their youth, and to feel that kids today should watch all the same things they did.

North America
Bringing Back Y2K Musicians Is the Hottest Thing In Live Music Right Now
Cameos from throwback music acts and nostalgic lineups are trending with young music ...
North America
The Internet Can’t Get Enough of the Met Gala on The Viral List
TL;DR: Fans can’t stop talking about their favorite (and not-so-favorite) ...
North America
Gen Z TikTokers Are Loving This Y2K Filter on The Viral List
A Y2K TikTok filter is making thin eyebrows trend, Arden Cho opened up about why she ...