I Want My Kid TV: What’s the Real Appeal of Nostalgia Viewing? 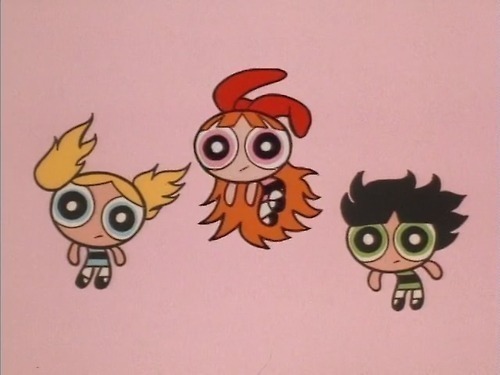 In the wake of a slew of nostalgia-driven entertainment reboots and remakes, we asked Millennials about their nostalgia viewing, and found the top five reasons they still love the ‘90s.

Rainbow Brite, Sailor Moon, Powerpuff Girls, The Magic Schoolbus, Reading Rainbow, Teenage Mutant Ninja Turtles, Boy Meets World—though this may sound like a greatest kid’s TV hits of the ‘80s and ‘90s list, it’s also a list of just some of the recent entertainment reboots and revivals, all being brought back to life in order to play into Millennials undying nostalgia. There is a significant portion of the entertainment industry today devoting their efforts to bringing back the shows and films that many Millennials remember fondly, in hopes that they can capture them as an audience.

Do Millennials want to relive their past? When it comes to rewatching the original content they grew up with, the answer is yes. In our most recent Biweekly Survey of 1000 Millennials ages 14-32, 88% said they like to watch movies/shows that came out when they were kids, and 73% say they think kids should watch the same movies/shows they watched growing up. In the past month, 66% have listened to music that they used to listen to as a kid, 59% have watched an old movie they liked as a kid, and 58% have watched an old TV show they watched as a kid.

But even though it’s often taken for granted (and true) that the generation is nostalgic, what’s not examined as often is just why Millennials just can’t stop loving the ‘90s. We recently verified their devotion to the decade, asking them to think about everything from music and movies, to clothing and cars, and choose the decade they would say was the overall best. 46% choose 1990-1999. (2000-2009 came in second place with 23%, and though 33% of respondents under 18 chose 2000-2009, 31% of the demo chose the ‘90s, so they were nearly evenly split. So what’s behind it all? We asked them to tell us, and have culled the answers for the top five reasons Millennials can’t stop loving the ‘90s.

1. They want to be kids again.

We’ll get this one out of the way: unsurprisingly, many told us they love the ‘90s because it was the time they grew up. Some simply said, “It was my childhood.” Many responses mentioned the decade being simpler, and more innocent.  One 17-year-old female told us, “Maybe because I was a child during this decade, but I feel like everything seemed more magical those days.” But the (mostly) unspoken sub-text of these statements is their desire to have some of that time back. In fact, when asked 66% say, “I wish I could go back to being a kid.” It’s not too hard to see that their intense nostalgia is in many cases a desire to recapture that ”innocent” or “magical” feeling, when everything felt simple and carefree for them. 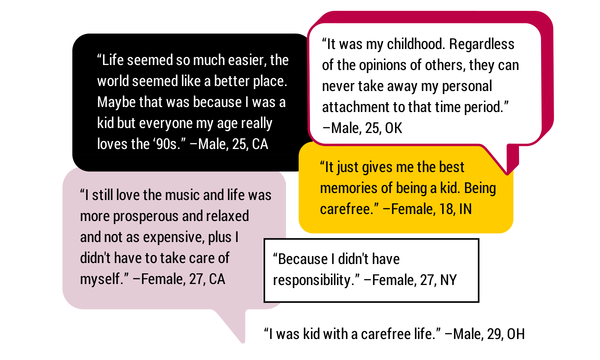 2. To them, it’s the decade of originality.

Though we are sure older generations would disagree with them, Millennials tell us that the ‘90s were just more original, especially when it came to music, movies, and TV.  Some of their feelings here might actually be a reaction to the recycled plotlines they’ve seen on TV and in movies in the last decade. One 19-year-old male told us, “Everything still seemed so original. Now, most things seem repetitive.” Respondents referenced unique music, and TV plotlines that were not based on something that had come before. (Most references to fashion were to acknowledge that it was “awful.”) When considering some of the off-the-wall entertainment being created for kids at the time (Ren & Stimpy, Beavis and Butthead, etc.) and the amazing number of teen-targeted movies that were released during the decade their claims seem justified. 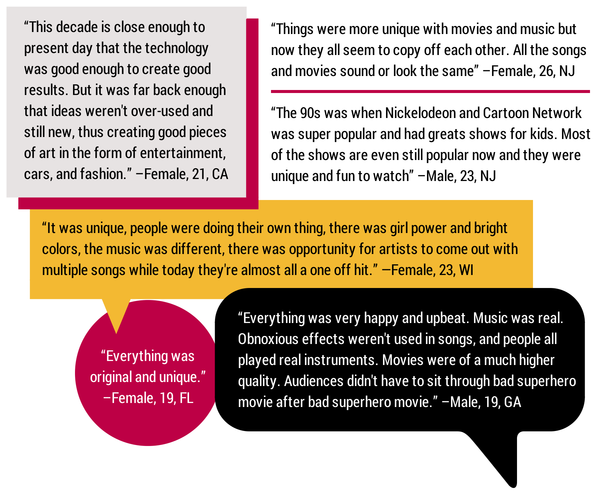 3. It was more wholesome.

Millennials as young as 18-years-old told us that they love the ‘90s because during the decade television and movies was more educational and wholesome. Yes, we know this is the same decade that produced the aforementioned Beavis and Butthead—and so do they. But many of the shows they watched growing up had an “afterschool special” vibe that they clearly yearn for—likely because it renews that feeling of innocence we already know they miss. Think about TGIF, and the music swelling as Danny Tanner of Full House teaches his daughters a great lesson through a heartfelt speech. They feel these moments (as admittedly cheesy as they are, and they do fondly say they were cheesy) are hard to come by on TV today. The emphasis on family, lessons, morals, and just “letting kids be kids” were all mentioned by respondents when talking about ‘90s entertainment, and the “simpler” time they feel the decade represents. 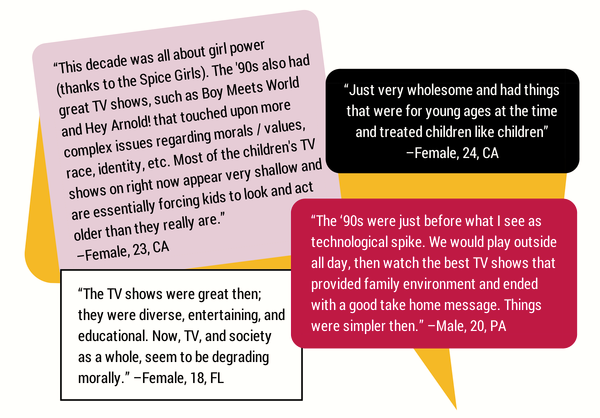 4. Their lives were more tech-free.

Yes, the same generation known for their smartphone addiction and social media socializing are nostalgic for a time before technology became so important. And they already have a “these kids today” mentality, comparing the post-Millennial generation to their own iPad-free pre-teen existence. According to one 22-year-old female, “Before the internet and personal cell phones, kids could just be kids. It wasn’t expected to buy your 8-year-old an iPhone or laptop. We played with friends outside and with our toys.” Technology in the ‘90s for them was a perfect balance: enough to keep things interesting, but still at an early enough stage that playing outside, talking to people in person, and not focusing on the internet were possibilities. Many older Millennials (and some younger) have almost reached peak-technology usage, and they crave an age when unplugging was not a choice but a normal state of being. It’s not just the lack of distraction they miss, but the human interactions that a lack of tech required everyday. As one 22-year-old male respondent told us, “It had the innocence of just being on the brink of technology. People still had to more or less rely on each other for information.” 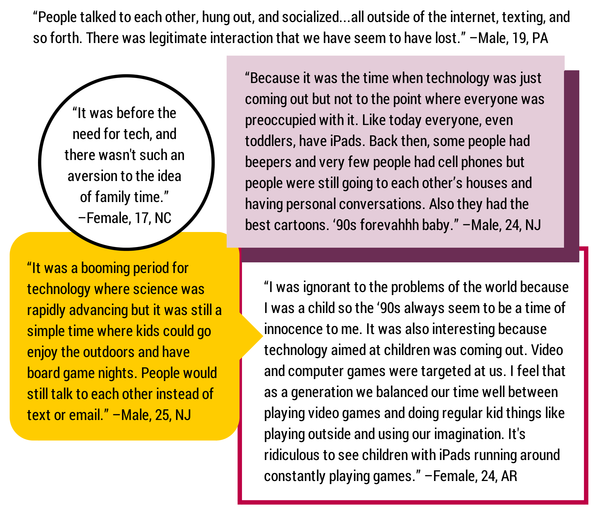 5. They genuinely think that ‘90s entertainment was better.

When asked to explain their love of ‘90s entertainment, many say it was simply “better.” They refer to it as the “golden age” of certain kids channels and entertainment brands, and when they compare their childhood entertainment to what they know of today’s they clearly prefer their own. Movies and music are judged in much the same way. No wonder 73% say they think kids should watch the same movies/shows they watched growing up. Considering this, releasing all these ‘90s reboots and remakes could actually a be smart tactic to take—if they can live up to Millennials’ memories. At the same time, the remakes are also supporting their belief that the content they grew up with was “better” than anything out there today. And for some, nothing that is released now will be able to live up to their shiny memories of the past—they just want to live in rerun heaven. One 27-year-old female told us, “The TV shows I grew up with were a million times better than anything I have seen since—even with all of the spin-offs and reboots! I swear, they should just show reruns instead of ruining the things I loved as a child!” 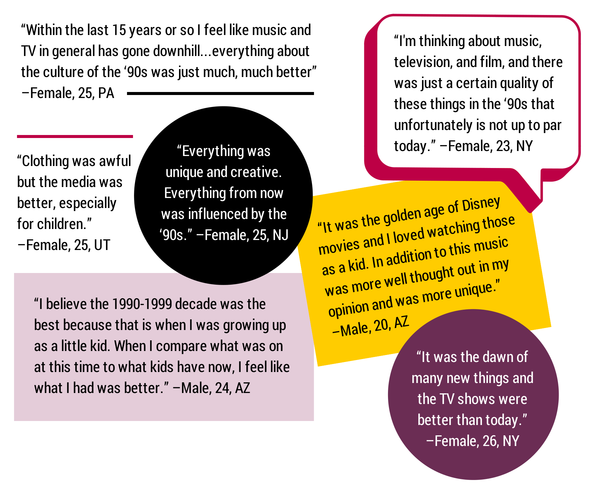