What Old Shows Are Young Viewers Binging Back to Life?

Young consumers are binge watching a massive amount of entertainment—so which shows are they giving new life?

Young consumers have made binge watching a major part of their entertainment behavior, and there’s no doubt, they’re having a love affair with binging. We explored their binge viewing behavior and its impact on other areas in our trend The Binge Effect earlier this year. The majority of 13-33-year-olds define binge watching as viewing 4-8 episodes of a TV series in one sitting, or watching a whole season of a TV series in one sitting. Seven in ten are binge watching monthly, and three in ten are binge watching every week—indicating that they are devoting a massive amount of time to binging content. In fact, they estimate that they’ve spent over 20 hours binging in the last month. So what are they watching?

The top kind of content they report binging is previous seasons of a currently airing TV show, and the top reason why they’re binging is to catch up on a TV show—both insights that have implications for newer series. But 71% of 13-17-year-olds and 79% of 18-33-year-olds have binge watched a show that has not been on TV for several years, 65% of 13-33-year-olds say that they are binge watching shows that are no longer on TV that they never had the chance to watch, and 62% of 13-33-year-olds are binge watching shows that are no longer on TV that they used to love. In other words, binging off-air shows is also incredibly popular with young consumers. One 30-year-old female said of binging an old show, “It’s like spending time with old friends. Also my friends all watch it and we quote it all the time.” Binge viewing is also helping to give defunct shows new life with a new generation of fans. Young viewers today have access to more content than ever before—and many are choosing to watch the shows that once “belonged” to older generations.

There are several implications of this nostalgia binging. As old shows gain new young audiences, their popularity in pop culture is revived. It’s also creating opportunities for show reboots—like Fuller House—as old shows become widely available to both their old fans and new viewers to consume in single sittings. To find out what the most popular old shows to binge are among young consumers, we asked them “What show(s) that has not been on TV for several years have you binge watched?”* Here are their top 20 answers:

Friends reigns as the top old show that young consumers have been binging. New York Magazine explored this phenomena in their article “Is Friends Still the Most Popular Show on TV?” in which author Adam Sternbergh explained, “[Y]ou might expect that Friends, like similar cultural relics of that era, would be safely preserved in the cryogenic chamber of our collective nostalgia. And yet, astonishingly, the show is arguably as popular as it ever was — and it is popular with a cohort of young people who are only now discovering it…as of January 1, 2015, the entire run of Friends — all 236 episodes, or 88 hours’ worth — has become available on Netflix [where] the sitcom appears to be winning a whole new audience. ‘The social chatter was huge,’ says Erin Dwyer, a Netflix spokesperson. ‘And we’ve been talking to a lot of teen oriented outlets, like Seventeen and Teen.com, and what we’ve been interested to learn is that they get just as much buzz and clicks for Friends as they do for something like Pretty Little Liars, which is on the air right now.’” Our data backs up their observations.

The show maintains its popularity when we look at their favorite old shows to binge watch, which we also asked*:

THEIR FAVORITE OLD SHOW TO BINGE

Amazingly, the series is also the top of the favorite list for each age and gender group: 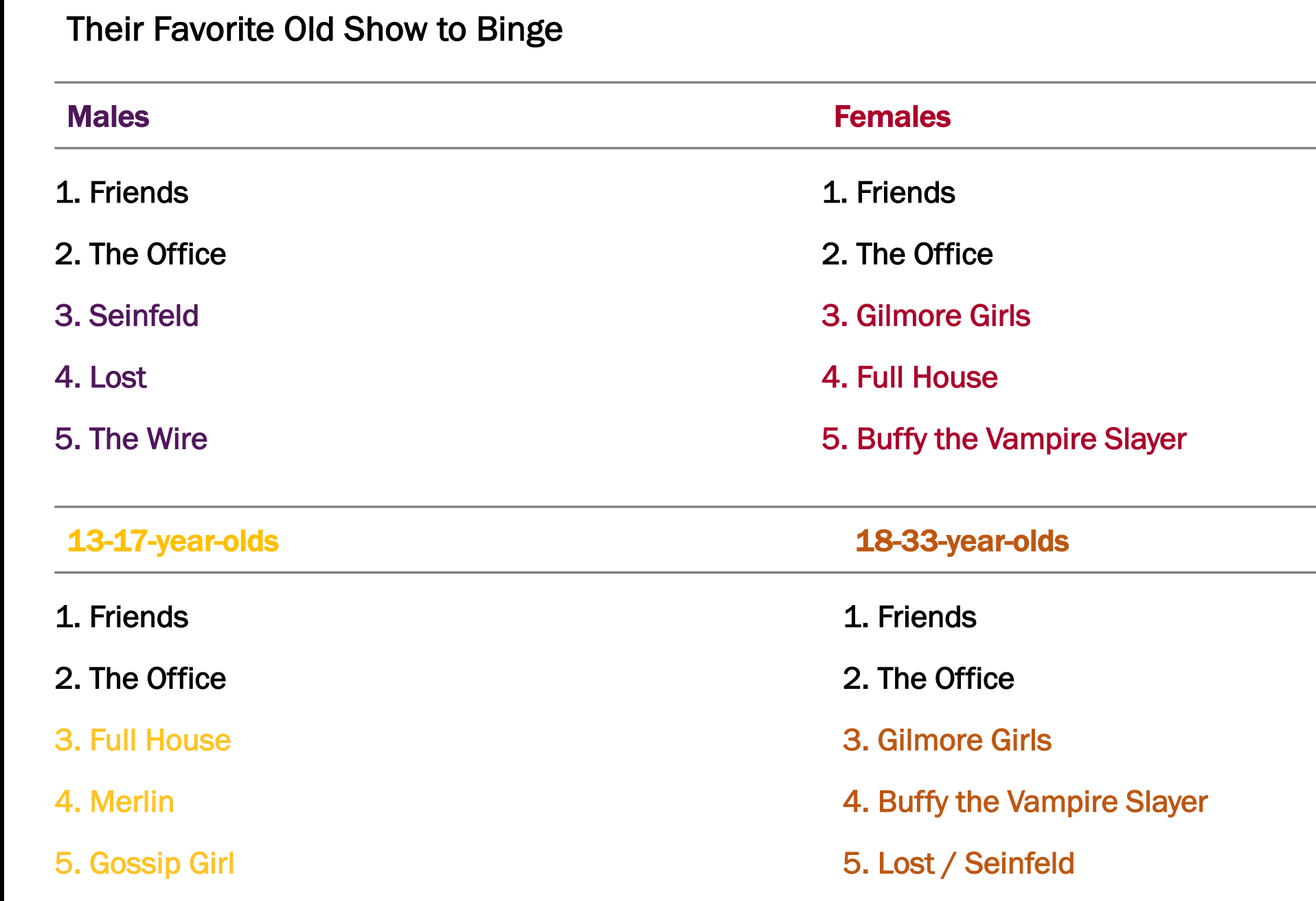 Friends and The Office are still appealing among teens and older Millennials viewers both male and female. Of course, there are some differences to their favorite old shows to binge lists after the top two. Females and older Millennials are more likely to name Gilmore Girls as a favorite to binge, indicating again that the built in audience for the upcoming reboot is with them. Meanwhile, males were more likely to mention Seinfeld as a favorite, and Full House made third place on the list for teens. Interestingly, this provides evidence that the fear that TV reboots are “alienating the YouTube generation” might need a second look.

As Stenberg and Netflix hinted, the resurgence in a show’s popularity presents opportunities for brands in terms of marketing, content, and more. What’s off the air might be cool again. Young binge watching viewers might have a new appreciation for older content, creating new opportunities to engage with them via these cultural touchstones.

*These were open-end response questions to allow us to capture the full range of series young viewers are binge watching. As with any qualitative question, the responses include those that are top of mind and those that are most loved. The lists are ordered according to number of responses received, and alphabetically when ties occurred.