Black dating app BLK and Juvenile want you to “Vax That Thang Up,” #TikTokResumes is trending as the platform announces a new feature that lets users apply for jobs directly through the app, fans are supporting Sha’Carri Richardson after she gets shut out by the Tokyo Olympics due to using marijuana, and Zaila Avant-garde becomes the first Black American to win the Spelling Bee—plus other news that took over social media this week! 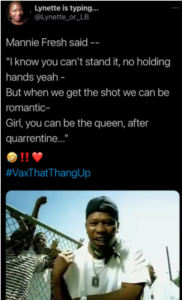 It’s no secret that brands have been taking advantage of the endless ‘90s revival, and Black dating app BLK is the latest to do so, while also encouraging single, Black young adults to get vaccinated by teaming up with rappers Juvenile, Mannie Fresh, and Mia X for a music video that remixes his 1999 hit single “Back That Thang Up.” Along with the title, which has been changed to “Vax That Thang Up,” the rapper also changed the hook to “Girl you look good once you vax that thang up // You a handsome young brother once you vax that thang up // Dating in real life, you need to vax that thang up.” According to Juvenile: “I just wanted to do something positive for my people.” So far, the video has more than one million views on YouTube. On the caption of their video, BLK wrote: “Black adults under the age of 40 are the most likely group to avoid the COVID-19 vaccination, according to the U.S. Census Bureau. Distrust of doctors and government, less access to vaccination centers, and online misinformation each play a role. We hope this video is both entertaining and actionable.” Throughout the clip, people are seen getting ready to go out on dates while getting ready and dancing to the remixed tune. Other celebs and musicians have been reacting to the new song, like John Legend, who tweeted that it is the new “Song of the Summer.” COVID-related anthems and remixes have been popularized in the last year: Zola actor Nicholas Braun released his pop-punk song “Antibodies” which quickly went viral, while Dolly Parton put a twist on her hit song “Jolene” while getting her first shot—and “Vax That Thang Up” is joining their ranks. YPulse has found that the majority of young consumers want brands to encourage people to get the vaccine. YPulse’s Finding Love Post-COVID trend report found that 31% of 18-39-year-olds said there either had to be a cure or vaccine before they felt comfortable dating again in person, and other dating apps like Tinder and Hinge have already offered free perks to users who have gotten vaccinated—and BLK’s creative approach is could make a difference among their young users. 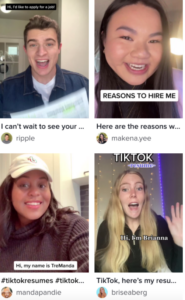 #TikTokResumes is Trending as Young Users Get Ready to Apply for Jobs on the App
TikTok isn’t just a place for dance challenges and fun recipes. In the last year, it’s transformed into a virtual event space (for proms or concerts) and a platform for protest—and now, it’s also becoming a place for career growth. In recent months, hashtags like #careeradvice (1.5 billion views) and #CareerTok (64 million views) have been organically trending on the app as users look for job advice, and apply for positions through video resumes. Career coaches have also been flocking to the app, and joining the ranks of other professions currently on there, to help out young job seekers sharpen their interviewing skills. The platform has also cultivated their own career-related videos about interview tips or job skills along with other how-to content such as recipes, financial advice, math skills, and home DIY videos. So, maybe it was inevitable that TikTok would eventually launch a job recruitment tool as a way to become “Gen Z’s LinkedIn.” The company officially announced this week that they’re now testing TikTok Resumes, a short-term pilot program that allows users to apply for jobs—you guessed it—directly through the app itself. There are already more than 30 companies, including Target, Chipotle, Sweetgreen, and Great Clips, signed up to accept resumes for the pilot, which is expected to last through the end of July. Users will be able to create a video resume, share it on TikTok, and send it to recruiters. Many of the brands are looking for entry to mid-level employees who are willing to work in stores and warehouses, but also include some full-time and corporate roles pertaining to social media or video production and editing. So far, the hashtag #TikTokResumes has 54.8 million views, and we anticipate that based on the response to the hashtags so far, the feature is likely to be a success among young, prospective employees on the app. 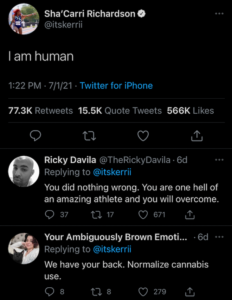 The Tokyo Olympics are starting later this month and we told you how many young consumers  plan on tuning in—but in the last week, the association has been receiving a lot of backlash. Last week, it was announced that 21-year-old Sha’Carri Richardson, who garnered a “legion of fans” after sprinting herself into first place at the 100-meter competition in Oregon, will be barred from competing at the Tokyo Olympic Games after testing positive for marijuana. Richardson’s win was considered invalid and she has been suspended for one month. Though that suspension technically allowed her to participate in the Olympics relay event, when the USA Track and Field released the list for its relay team, she was not included. During an interview with TODAY that received 1.3 million views on Twitter alone, Richardson told news anchor Savannah Guthrie that she used marijuana to cope with her mother’s recent death, and told the audience: “Don’t judge me, because I am human…I just happen to run a little faster.” She also tweeted “I am human,” which received 565.2K likes and 77.2K retweets, the day before her suspension was announced. Since the news broke out, celebrities like Gabrielle Union, Jonathan Van Ness, and Seth Rogen, and fans have been showing their support for the runner. A petition on MoveOn Civic Action pushing to “reinstate Richardson” and objecting due to an “outdated and arbitrarily enforced rule around marijuana” has nearly reached its goal of 600K signatures. Meanwhile, Nike released a statement saying they will continue to support Richardson during this time. (Of course, this isn’t the first time Nike has shown their support for outspoken young athletes: Last month, they continued to support Naomi Osaka after she dropped out of the French Open due to mental health reasons, and they have consistently shown support for former NFL player Colin Kaepernick.) YPulse’s new health, drugs, and risky behavior report found that 40% of 20-38-year-olds have experimented with marijuana, and support for Richardson shows that culture and institutions are still a step behind their perspectives. But in combination with a ban on use of swim caps for natural hair, the games are certainly under fire for discrimination. 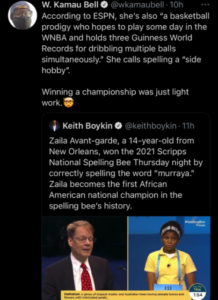 Zaila Avant-garde Becomes the First Black American to Win the National Spelling Bee
The Scripps National Spelling Bee has been going on for nearly 100 years, but on Thursday night, history was made when Louisana-based eighth grader Zaila Avant-garde won the cup, along with $50,000. The 14-year-old became the first Black American student to take the title, beating out ten other finalists. (The first Black winner was 12-year-old Jody-Anne Maxwell from Jamaica, who took the cup in 1998.) During the last round, Avant-garde was asked to spell “murraya,” which is a genus of tropical Asiatic and Australian trees. Prior to spelling it out, she carefully analyzed and dissected the word, which she eventually got right—and was rewarded with bursting confetti on stage, and the win. The historic, final moment has been reshared across social media, including ESPN’s official Twitter account—where the video received 2.5 million views—and has been praised by First Lady Dr. Jill Biden, who attended the event, and Bernice King, the daughter of Martin Luther King Jr. Comedian W. Kamau Bell also praised her, tweeting that Avant-garde winning was “just light work” for the multi-talented young woman. Prior to the Bee, Avant-garde had been spelling competitively for two years and set three Guinness world records for dribbling, bouncing, and juggling basketballs simultaneously—all before high school. In 2018, she appeared in a commercial with NBA star Steph Curry where she showcased her basketball-playing skills. During an interview with Good Morning America, Avant-garde said: “I’m hoping that in a few years, I’ll see a whole lot more African American females, and males too, doing well in the Scripps Spelling Bee because it’s kind of sad how there is a great lack of those people. You don’t really see too many African Americans doing too well in spelling bees, and that’s a bit sad, because it’s a really good thing and is a gate opener to being interested in education.” 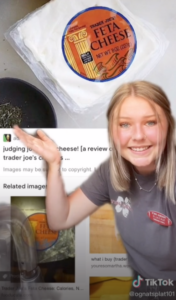 From feta cheese to almonds, this Trader Joe’s employee revealed the products selling out because of TikTok trends.

A TikTok video, which has a whopping 2.5 million views, analyzing why Ritz crackers have a scalloped edge is blowing users’ minds.

Basketball fans are showing their excitement for the NBA finals with the hashtag #NBAFinals, which currently has 594 million views and counting.

Khaby Lame has surpassed Addison Rae as the second-most followed creator on TikTok.

Tarte Cosmetics is denying accusations that they used a filter in a video meant to demonstrate having a no-filter look.

Disney just dropped the trailer for their next animated film Encanto, which features original music from Lin-Manuel Miranda.

The first photo from HBO Max’s Sex and the City reboot has been unveiled.

The Teletubbies are officially vaccinated.

Gigi Hadid wrote an open letter to paparazzi on Instagram asking them to respect their privacy and blur her child’s face in photos.

North America
Young People Are Saying Goodbye to the iPod on The Viral List
TL;DR: RIP, iPod—Apple is going to discontinue making the devices after ne...
Western Europe
2 Charts Show That Young Europeans Are Watching More Video Content Than Ever
Even as Western European countries drop COVID restrictions, our data shows that you...
North America
3 Stats on LGBTQ+ Youth’s Mental Health
May is Mental Health Awareness Month, and LGBTQ+ young consumers have different needs...