The 15 Coolest Clothing Brands, According to Young Consumers

What does a fashion brand have to do to be cool today? According to the co-designer of Proenza Schouler, Millennials and Gen Z are responsible for bringing “inclusivity, gender neutrality, comfort, [and] casualness” to the industry. They’re also expecting experiences like Instagrammable unveilings and streetwear drops of exclusive merch. Inspired by influencers on social media, and ads in their Instagram feeds, young consumers are also more open to and interested in niche, indie brands than ever before. Nordstrom is even stocking up on these Instafamous brands, announcing that “strategic” brands account for about 40% of their current revenue—with a forecast that it will only increase.

With indie and direct-to-consumer brands to contend with, major brands have to fight harder than ever to be considered cool as well. Some, like Abercrombie & Fitch, are undergoing huge rebrands to convince young consumers they’ve changed. Others, like Calvin Klein, are betting on nostalgia, harkening back to their heydeys and tapping into the endless ‘80s and ‘90s throwback trend. So what’s working? We have the data on what major brands young consumers still consider cool today.

Ypulse youth brand tracker, available to Pro subscribers, which launched in January of this year, has collected over 40,000 interviews that tell us how young consumers feel about more than 300 brands. We ask young consumers everything from what brands help support the causes they care about to which are good quality to, you guessed it, which are cool. Here are the top 15 clothing and apparel brands 13-36-year-olds think are cool right now:

*The YPulse brand tracker measures young consumers’ relationships with a brand based on a weighted 6-point scale, ranging from “Never heard of this brand” to “This brand is one of my favorites.” As part of the“Brand Personality” metric, we also ask respondents “Which of the following are cool?” These are the top clothing/apparel brands that were rated “cool,”  among those who are aware of the brand. The brands on this list are among the 243 brands included in the brand tracker as of 8/15. Rankings are subject to change as more brands are added and removed.

Ah, Nike. It seems this brand cannot be toppled as a favorite—and it is the top major brand that young consumers consider cool, followed by Adidas, Vans, and Under Armour. Athletic brands top the “cool” list, not too surprising in the age of athleisure. In fact, our most recent fashion and shopping survey, released today, found that 58% of 13-17-year-olds and 39% of 18-36-year-olds own athletic wear for style, not working out.

The dominance of athleisure, and Nike, is even more clear when comparing cool rankings across age groups: 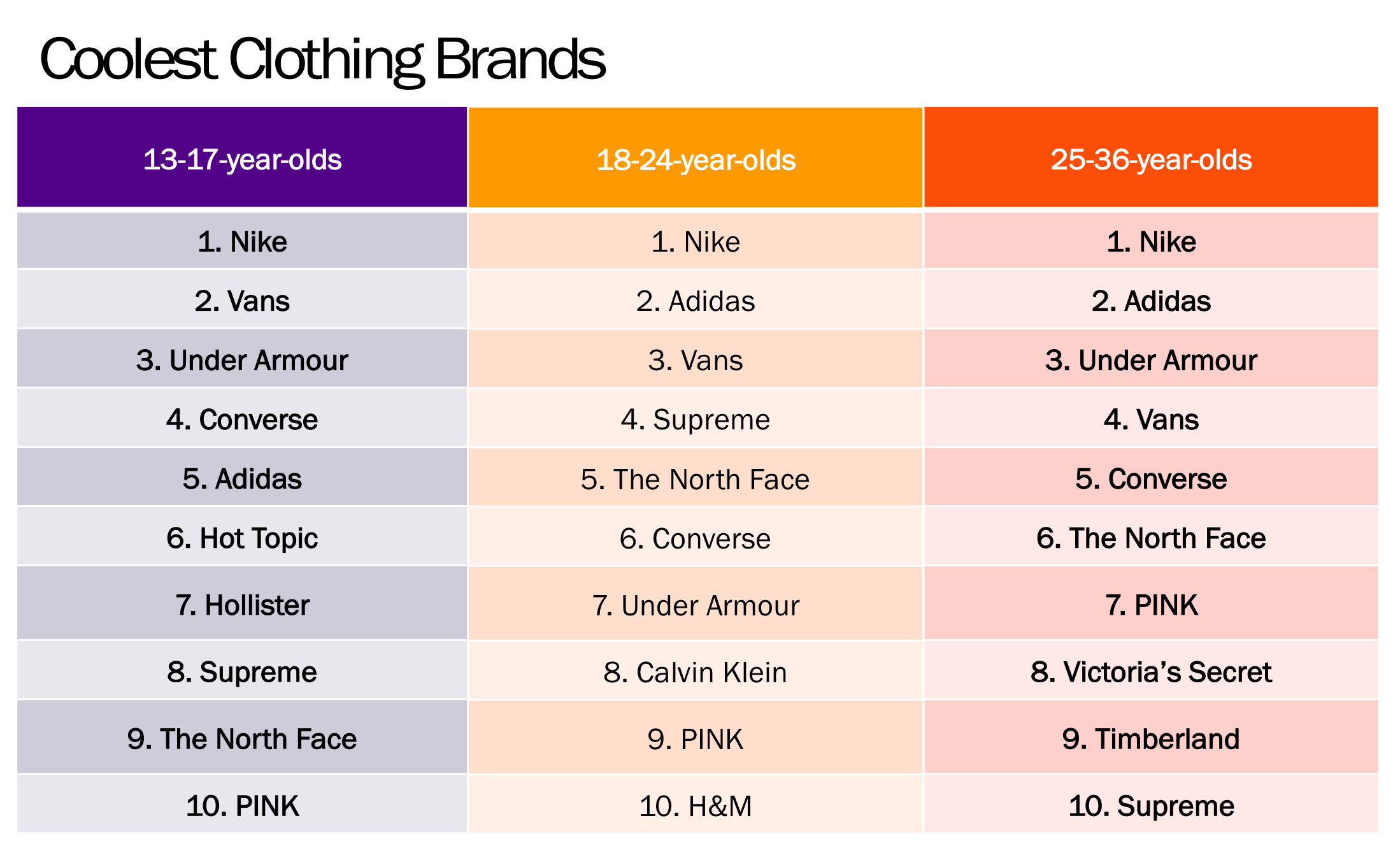 Nike ranks at number one among 13-17-year-olds, 18-24-year-olds, and 25-36-year-olds, and athletic brands are in the top three to five spots among all three groups. But there are differences to be found as well.

Hot Topic is more likely to be considered cool among 13-17-year-olds, ranking as number six on their list but not making the top ten for the older two groups. (Perhaps they’re the biggest fans of fandom merch?) Teens were also more likely to say that Hollister is cool.

Meanwhile, 18-24-year-olds are the biggest fans of Supreme, and also the most likely to say that Calvin Klein and H&M are cool. (Maybe that nostalgia play is working for Calvin Klein.) While this is considered a highly-sought-after demographic, the brands that appear on their list but not the others should consider what will happen as the next generation ages into their prime spending years—and who they might be missing out on now.