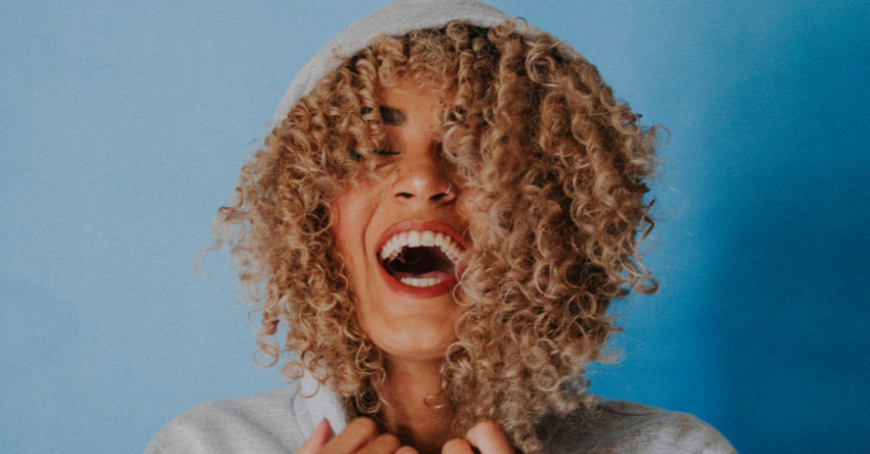 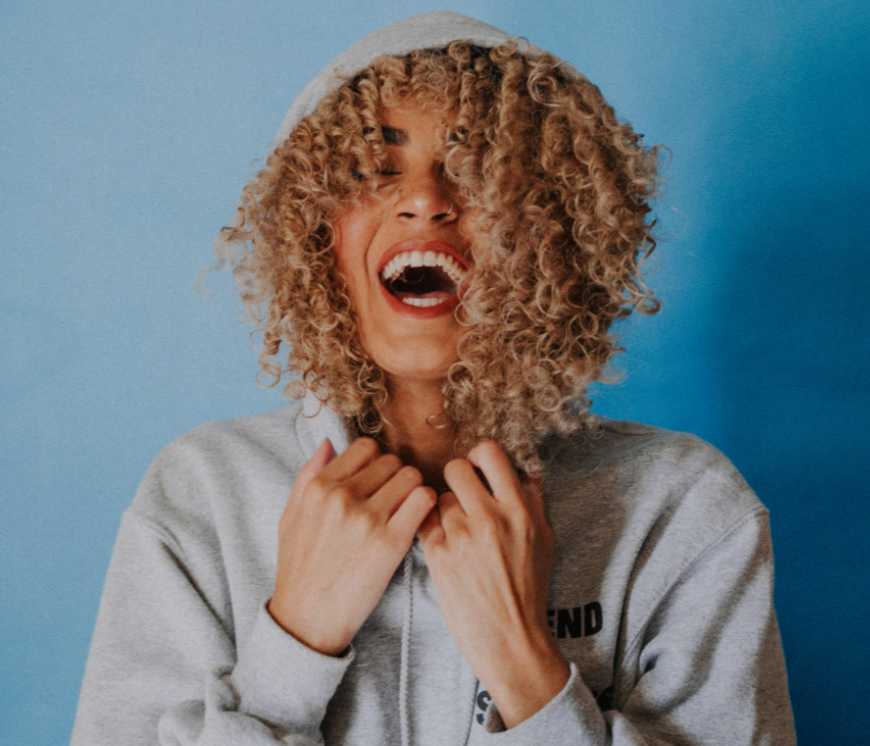 Gen Z and Millennials are more diverse than any generations that have come before them, and understanding what brands are succeeding among BIPOC young people is key to future success. YPulse’s youth brand tracker data shows the brands winning with this demographic right now…

Our youth brand tracker uses youth-specific diagnostics to measure brands’ performance among Gen Z and Millennials, and compiles all of those individual scores into YScore+,  an overall measure of the affinity performance of a brand. Our BIPOC Brand Affinity Special Report shares the top 50 brands among this group across industries, along with an industry-by-industry breakdown of the top brands in media and entertainment, retail, fashion, CPG, health and beauty, financial services and more. Today, we’re giving you a glimpse of BIPOC young consumers’ brand preferences by revealing the ranking of the 15 brands with the highest YScore+ among this group across all industries compared to the brands’ ranking among White/non-Hispanic (WNH) consumers: 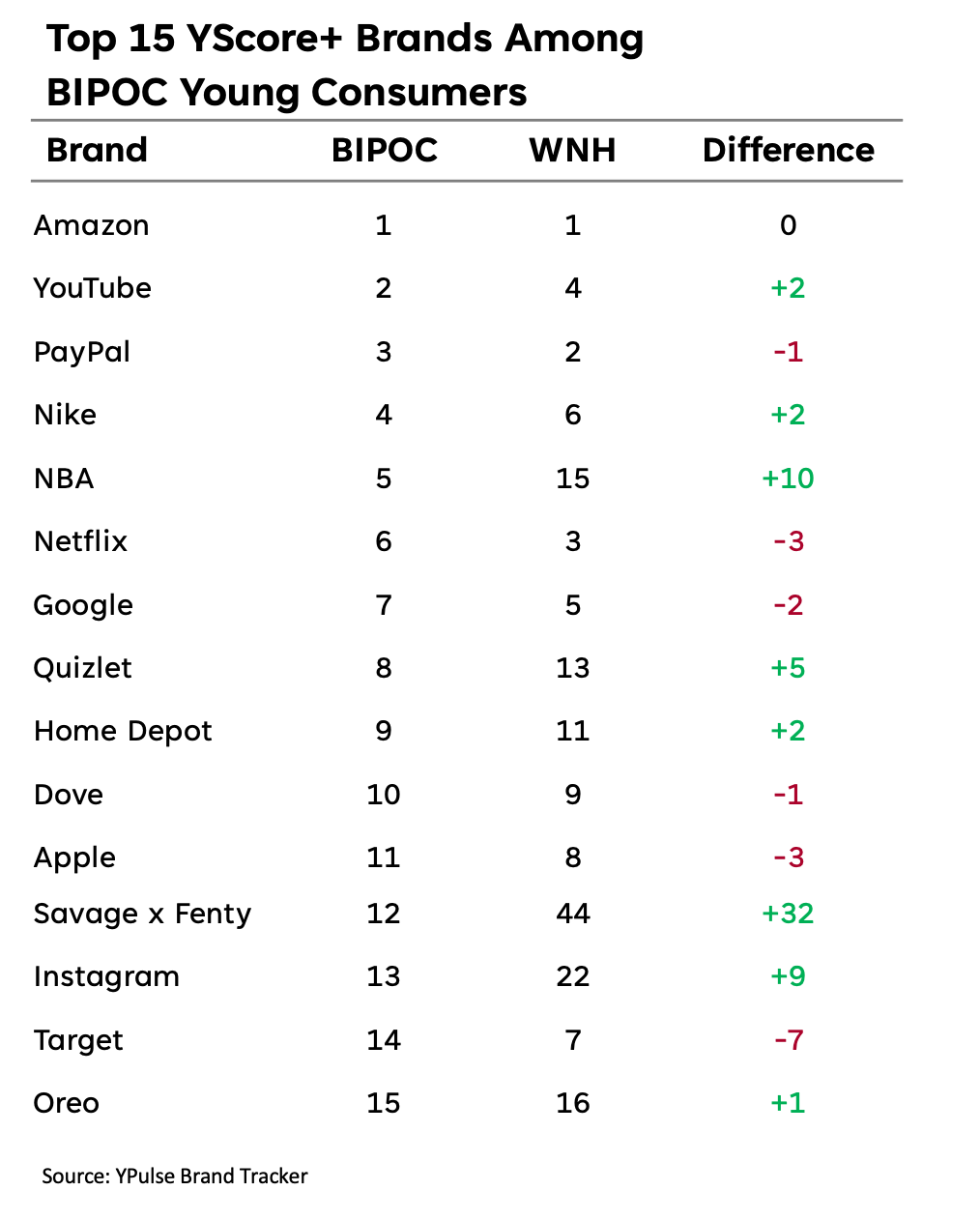 Let’s start at the top: Amazon is the brand with the highest YScore+ among young BIPOC consumers, showing that their affinity for online shopping is very much there. It’s also the number one brand among their White/non-Hispanic peers, showing both that the ecommerce giant is dominating among all young consumers, and that there is some strong alignment between BIPOC young consumers’ brand tastes and White/non-Hispanics’.

But there are clearly some brands that do, indeed, perform far more strongly among BIPOC young people, and some of those brands are in their top 15 ranking. YouTube ranks second among young BIPOC brands, and does rank slightly higher among this group than White/non-Hispanic consumers.. We recently told you that nearly half of BIPOC young consumers think YouTube offers entertainment they feel is diverse and inclusive—and in the last year, the platform has been doing a lot to target this group. They launched a #YouTubeBlack Voices Program to support Black creators from all over the world, and have released plenty of online series and kids’ content featuring BIPOC characters and talent, including a Kid President spinoff from SoulPancake, a new version of BookTube targeting young readers, a series starring popular kids’ creator Guava Juice, and Super Sema, a series about a young superhero who uses “her technovating powers to save her village.”

Nike ranks fourth on the top YScore+ ranking among BIPOC young consumers, and also ranks slightly higher among this group than White/non-Hispanics, a difference that perhaps shouldn’t be a surprise given their support for Black Lives Matter (they were one of the first brands who supported Colin Kaepernick after he spoke out against police brutality) and young athletes of color like Sha’Carri Richardson and Naomi Osaka. Their inclusive marketing has clearly made a strong impression on BIPOC young consumers.

But while YouTube and Nike perform just slightly better among BIPOC young people, several brands on the ranking are clearly far more preferred among this group, including the NBA, which is ranked fifth among young BIPOC consumers compared to 15th among White/non-Hispanics. It is also notably the only sports league in the top 10. Gen Z and Millennials’ top favorite professional athletes are dominated by NBA players, and these star athletes provide the representation that BIPOC young people often aren’t seeing in other sports. Savage x Fenty is another brand performing much more highly in affinity among BIPOC young people, ranking 12th among BIPOC Gen Z and Millennials compared to 44th among White/non-Hispanics. This 32 place difference is the largest in the top 15 (though not the largest in the top 50) and a huge example of how the brands that make representation and inclusion a priority and core value are truly more likely to win over BIPOC young people.

The BIPOC Brand Affinity Breakdown Special Report delves even more deeply in to the brands that are succeeding among BIPOC young people (reminder a full half of these generations) and what they’re doing right, digging into the ways that brands across industries have been appealing to this significant and influential group.