Gen Z and Millennials are the most diverse generations in history, with half of the younger generation identifying as BIPOC—and they have long been demanding that they be better represented in media and entertainment. YPulse’s recent Representation in Action trend research found that the demand for inclusion remains strong for these young viewers. But in addition to revisiting their desire for more representation, we also examined the impact that representation has on their behavior, from brands preferences to media choices.

Our research shows that young viewers are migrating to the platforms that provide the diversity and inclusion they’ve been looking for. Interest in watching shows and movies with diverse casts are overwhelming, for both generations: 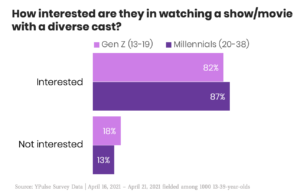 When we asked 13-39-year-olds, “How interested are you in watching a show/movie with a diverse cast?” Over four in five of both Gen Z and Millennials tell us they are. We also found that 74% percent of 13-39-year-olds agree that more TV shows / movies should star non-white actors / actresses, and 85% say that TV shows / movies should make an effort to represent all races. But what’s also striking is that interest in diverse casts is just as common among White/Non-Hispanic young consumers as it is among BIPOC young consumers: 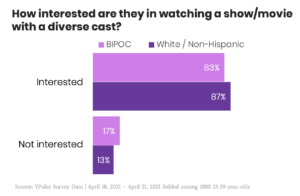 Over half (54%) of both BIPOC and White/Non-Hispanic young consumers also tell us they have watched a TV show/movie specifically because it featured a diverse cast—and another 27% of both groups say they haven’t done so but are interested. In addition, 55% of BIPOC young people tell YPulse they have watched a TV show/movie because it centered around their race or ethnicity. (This could explain the slightly lower number of BIPOC young consumers who say they are interested in diverse casts—some might be interested not just in “diverse” casts, but in casts that provide focused representation for their own race or ethnicity.)

It is clear that young viewers are seeking out more inclusive content—which brings us to the question, where are they going to find it? We asked 13-39-year-olds what media sources offer entertainment that is diverse and inclusive and found that their top responses are also the most popular platforms among these generations: 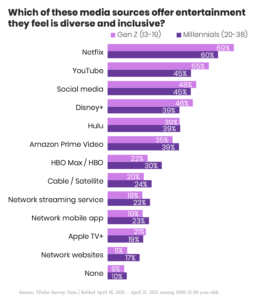 Netflix is the top media source that Gen Z and Millennials feel is diverse and inclusive, with more than half (69% of 13-19-year-olds and 60% of 20-38-year-olds) of them saying so. And according to YPulse’s media consumption research, Netflix is also the top entertainment platform that young viewers are watching weekly. We see a similar pattern throughout the ranking—YouTube and social media platforms are top sources for diverse and inclusive entertainment and are at the top of the list of young consumers’ regular entertainment choices. It’s not a stretch to conclude that Gen Z and Millennials are turning more frequently to the media platforms that are more likely to provide the inclusive content they’ve been looking for, and featuring diverse casts and talent is helping to fuel the success of the most popular entertainment sources.

BIPOC and White/Non-Hispanic young consumers are in alignment on their beliefs about the most inclusive entertainment sources, but there are a few key differences between the two groups: 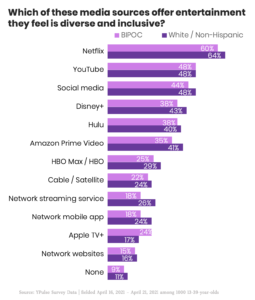 Among the two groups, the rankings of the media sources stayed relatively the same, but across the board, the percentages were slightly lower among BIPOC young consumers compared to White/Non-Hispanic young consumers—indicating that there is still more work to be done to make young BIPOC viewers feel represented.

It’s possible that because some of the media platforms listed (like HBO Max and Disney+) are fairly new, young consumers haven’t been able to see the full scope of their offerings compared to some of the others that have been around longer, like Netflix and YouTube. Though HBO Max has already been praised for its diverse offerings, along with Disney+ whose top series like The Falcon and the Winter Soldier focus on Black actor Anthony Mackie’s journey to becoming Captain America. Amazon Prime Video has also recently started ramping up their offerings of diverse content. If they continue to prioritize diverse casting and storytelling, it’s likely we’ll see the numbers for these platforms increase over time.

Over the last few years, Netflix has become known for creating movies and shows that center around diverse leads and casts, from the To All The Boys I’ve Loved Before franchise to Never Have I Ever to Bridgerton and Shadow and Bone as well as childrens’ series like Waffles + Mochi and the upcoming Antiracist Baby. According to a recent Netflix study, young diverse viewers are beginning to see themselves reflected more on screen, and diverse characters have been on the rise for some time now, and 63% of 14-24-year-olds saying they feel TV series and movies are more accurately reflecting their daily lives. YouTube has also been ramping up their diverse content, thanks to their #YouTube Black voices program and new $100 million fund, which they used to create new original programming like Super Sema.

The efforts of both platforms are earning them a reputation for representation among young consumers—and drawing in those viewers as a result.