Seeing their own diversity reflected back to them is a major desire of young consumers—so which brands are succeeding in their eyes? We looked to our brand tracker to find out…

We call Gen Z and Millennials the Diversity Tipping Point generations. Millennials were the most diverse generation to date, until Gen Z. Gen Z is the first generation that will have a non-white majority, and inclusiveness is a major value for them. These generations are looking for their own diversity to be reflected back to them in marketing, and in entertainment. YPulse research shows 71% of 13-36-year-olds believe more TV shows/movies should star non-white actors/actresses, and 58% of 13-36-year-olds like seeing more diverse actors cast as previously seen characters. When we ask young consumers what brands could do to win them over, 72% say featuring diverse models in an ad would make them view a brand more positively. A full 40% said that ads that feature only Caucasian people make them view a brand more negatively.

We continuously see evidence that young consumers celebrate brands that make diversity a priority, and call out those who don’t. Reflecting diversity is a brand value that they demand, but not every brand is meeting their standards. Who is? The YPulse youth brand tracker interviews 81,000 13-39-year-olds annually, measuring their affinity for and views of over 400 brands—including whether they think a brand reflects diversity. Here are the top 15 brands that Gen Z and Millennials have rated as succeeding in this effort:

*YPulse’s youth brand tracker measures young consumers’ relationships with a brand based on a weighted 6-point scale, ranging from “Never heard of this brand” to “This brand is one of my favorites.” We also ask respondents “Which of the following REFLECT DIVERSITY?” These are the top brands that were rated as reflecting diversity, among those who are aware of the brand. The brands on this list are among the over 400 brands included in the brand tracker as of 9/17/2019. Rankings are subject to change as more brands are added and removed.

Rihanna’s Savage x Fenty and Fenty Beauty sit at the top of the ranking of brands that young consumers feel reflect diversity. From the moment the Fenty Beauty brand was first announced back in 2017, diversity has been at the center of their ethos and messaging. The initial promo video for the line went viral because of its inclusivity, and prompted the reaction: “Rihanna releases one campaign and it’s already more diverse than the whole of the beauty industry put together.” The brand was answering young consumers’ desire for representation: our most recent beauty and personal care survey found that 83% of young females say they wish beauty ads featured more people with different skin tones. Fenty Beauty’s inclusive marketing was just the beginning. After their groundbreaking 40-shade lines were introduced, other brands raced to catch up with more extensive lines, but Fenty had already established itself as the new standard for diversity. Currently, 95% of 13-37-year-old females tell us that cosmetic brands should create products for a wide range of skin tones.

Savage x Fenty was founded with the same goals: to represent those who have felt left out for too long. The brand just stole headlines at fashion week for their debut show, which The Cut reports was inclusive and empowering, going beyond just size and skin tone with differently-abled and non-binary models strutting down the runway As Rihanna explained to publication after, “Last year, we laid the foundation for what the brand stood for…Here’s our bottom line: We’re inclusive. We want women to feel confident no matter what size they’re in. This year, it was about: How do we expand that? How do we make more women feel more confident?”

With reflecting diversity such core, and publicly stated, goals of these brands, it’s no surprise young consumers view them as authentically inclusive. But while Fenty scored very highly among both generations, another brand was actually at the very top of Gen Z’s list: 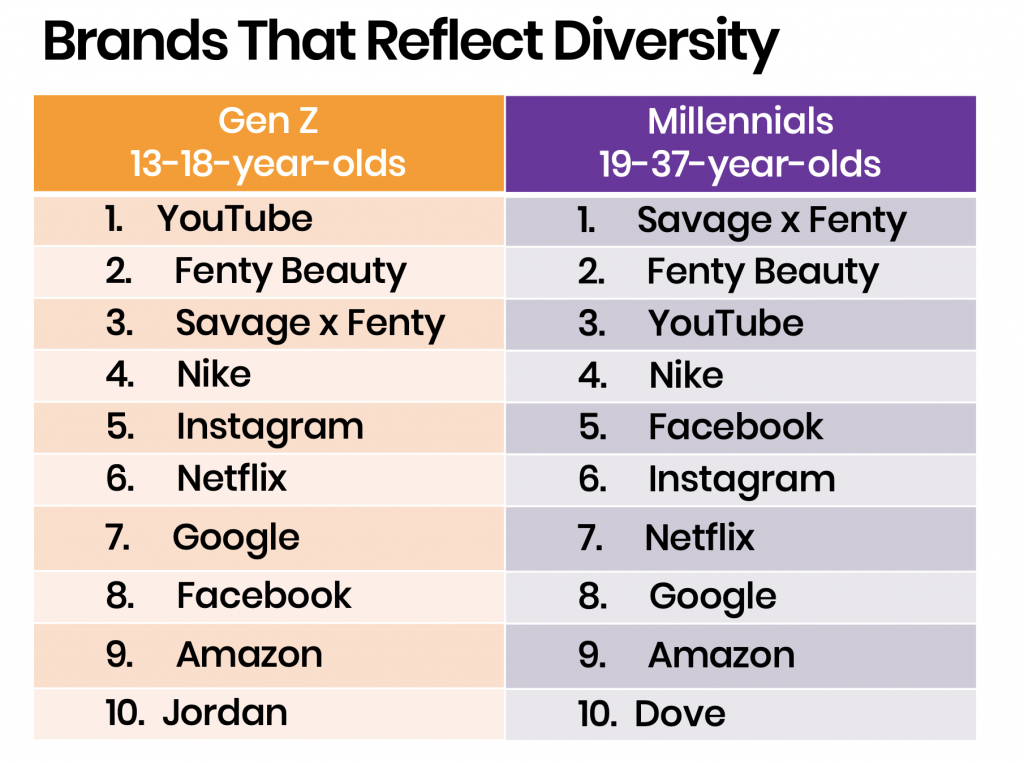 Gen Z is most likely to see YouTube as a brand that reflects diversity—and that explains a lot about the generation’s media preferences. YouTube is the top media source for 13-18-year-olds: 76% say they watch it weekly or more often, compared to only 18% who say they watch cable weekly or more. Ultimately, YouTube is Gen Z’s cable, and diversity could be one of the major draws of the non-traditional media. Not seeing enough representation elsewhere, these young viewers flocked to a media source that would allow them to view media starring, and made by, people who look like them. YouTube stars don’t fit a mold, and diversity is baked into YouTube’s content, because anyone can create content there. Gen Z clearly sees it a place that reflects their own diversity back to them, which might be what brought them there in the first place.