Gen Z didn’t cut the cord—they never connected it in the first place. The generation that never knew cable is watching plenty of video content, but they’re doing it differently. Find out how…

Gen Z is a video-first generation. They’re more likely than Millennials to prefer video over text, and are attracted to social platforms that put video front and center (see: YouTube, Snapchat, Instagram, and TikTok). But their appetite for video isn’t good news for everyone. This generation wants content, but they’re likely to be “cord-nevers”—putting traditional cable in a precarious position. According to Variety, the entertainment industry has “come to the realization that [cable] is a declining business.” Providers like Comcast are switching their focus to broadband and many are offering traditional TV at a loss. And the streaming service race is on, with major players launching OTT options to capture the young viewers they’ve lost—or never had. Gen Z is a vital part of that audience, but also might be the most elusive.

YPulse’s quarterly Media Consumption Monitor survey asks young consumers what kind of content they’re watching—and how exactly they’re watching it. Our most recent look at their media behavior reveals just how different Gen Z’s media consumption is from Millennials, how little they’re watching traditional TV, and where their eyes are right now: 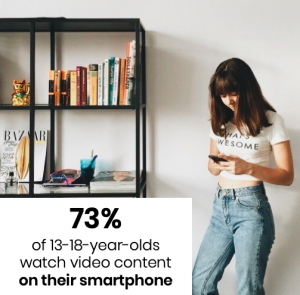 When we ask young consumers what devices they use to watch video content weekly or more often, 73% of 13-18-year-olds say they watch on their smartphones. And according to Think with Google, seven in 10 teens spend more than three hours per day watching mobile video. This mobile video consumption isn’t just about convenience, it’s actually becoming their preference. Our entertainment survey found that 28% of Gen Z say that their smartphone is the device they most like to watch TV series and video content on—compared to just 6% of Millennials who say the same. 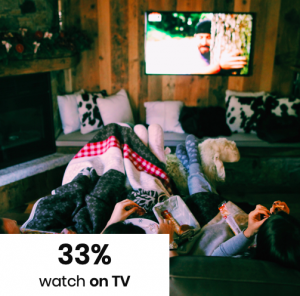 While the majority of Gen Z are watching video content on their smartphones, their time watching TV screens is far less significant. Only 33% of 13-18-year-olds tell us they watch content on TV weekly. When we ask which screen they spend the MOST time watching weekly, only 24% of Gen Z say TV—compared to 41% of Millennials. While neither generation is reporting the TV as their top screen, Gen Z is spending far less time watching it than their older counterparts. This is a generation that is growing up with small screens as their norm—in large part because the platforms they consume video through are made to be mobile. 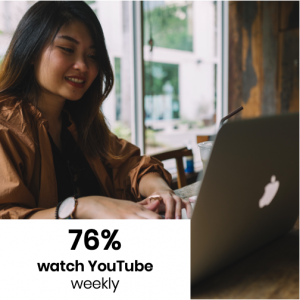 YouTube is the top media source for Gen Z, with 76% saying they watch it weekly or more often, compared to 61% of Millennials. (Netflix is the top media source for Millennials.) Ultimately, YouTube is Gen Z’s cable, and the fact that YouTube is their top entertainment source also changes the kind of content that they’re watching—drastically. Unregulated, often weird, videos earn millions upon millions of views, and are influencing their purchasing behavior. And according to our research, music and music videos are the top kind of short content that Gen Z viewers are watching weekly, followed by vloggers/online personalities. 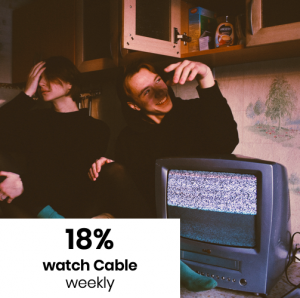 4. Less than one in five watch cable weekly.

With the minority telling us that they watch content on TV screens weekly, it should be no surprise that only 18% of Gen Z say they watch cable weekly or more. Cable is sixth on their ranking of media sources. In fact, several social media platforms are at this point beating out cable as sources of video content for Gen Z (see below for more on this). Millennial parents are raising their kids without cable as well, telling YPulse that their kids are more likely to watch streaming services than anything else—and shaping a future where cable is seen as a rare exception. 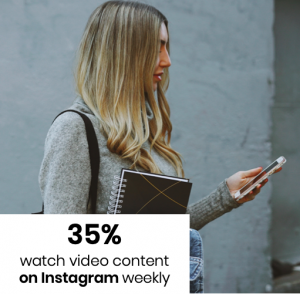 Several social media platforms outrank cable as some of Gen Z’s media sources, and 35% tell us they use Instagram to watch video content weekly. That makes Instagram the top social platform for video consumption among Gen Z—and Millennials. Comedy, beauty, and vlogger content are the top three types Gen Z says they enjoy most on Instagram. But the image sharing network isn’t the only social space beating out cable as a video source among the younger generation: 27% of Gen Z tell us they watch video content on Snapchat weekly (and they’re more likely to report doing so than Millennials).

North America
Young People Are Saying Goodbye to the iPod on The Viral List
TL;DR: RIP, iPod—Apple is going to discontinue making the devices after ne...
North America
The Top Platforms Kids Are Watching Weekly, According to Millennial Parents
What platforms are kids watching video content on weekly? TL;DR: Netfl...
North America
Religion Doesn’t Make the Top 10 Ranking of Where Gen Z Turns to for Guidance & Support
We asked young people who they look to for guidance and support outside of their frie...