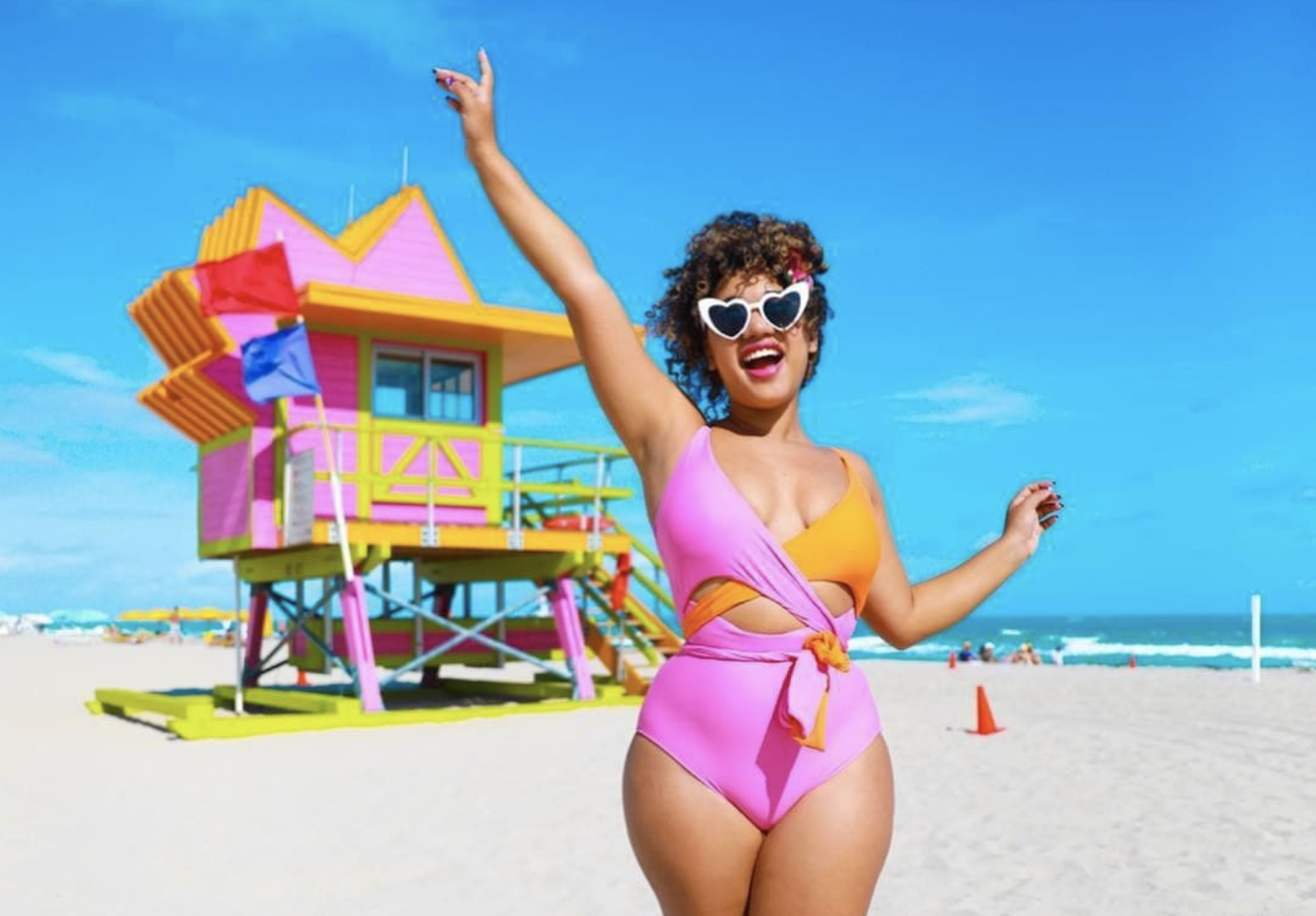 To reach young consumers, some brands are taking a stand and aligning themselves with progressive causes. But how much do woke and diverse ads actually appeal to Gen Z and Millennials?

When it comes to reaching young consumers, brands don’t have it easy these days. While we’ve said it before, it bears repeating: Millennials and Gen Z are more sensitive to ads now than ever—and are exceedingly adept at ignoring them. A recent study from the McCarthy Group found that 84% of Millennials say they don’t like traditional marketing and 69% of Gen Z already avoid ads, according to Millward Brown. YPulse keeps tabs on the types of ads that young consumers avoid, and we’ve found that nearly half of 13-36-year-olds use an ad blocker. But more than simply not wanting to see ads, Millennials and Gen Z expect ads to reflect a brand’s values—and those values had better align with their own. As we told you in our trend From Causes to Crises, young consumers are living in a post-woke world, and when brands wake up with them, they can win the difficult-to-obtain loyalty of Millennials and Gen Z. But it can be a tricky marketing path to take. Many brands who align themselves with a progressive cause with the hope of getting young consumers’ attention can also find themselves in the middle of online backlash. Just look at Nike’s controversial Kaepernick campaign or Gillette’s “The Best Men Can Be” spot—both ads stirred up ire, even as they succeeded at further reeling in their core demographic. And while the Nike spot was generally heralded as a success, some accused Gillette of trying too hard to appear “woke.”

Of course, brands can try a little too hard to appeal to young consumers’ social sensibilities, which can be worse than not trying at all. Pepsi’s Kendall Jenner marketing miss, for example, stumbled with what young consumers interpreted as a tone-deaf campaign, and many brands have found themselves in the crosshairs of a social media firestorm or even boycott movements after attempts at wokeness. And still another portion of young consumers simply rolled their eyes at what they see as brands’ hollow attempts at relevancy—over six in ten young consumers agree that brands connect to social causes as a cynical ploy to make more money. The danger of turning them off is real: 38% of 13-36-year-olds told us they’ve stopped buying from a brand based on an ad they didn’t like.

All of this understandably leaves brands walking a dicey tightrope between the pressure to align with Millennial and Gen Z values and the fear of taking a misstep. After all, how much do young consumers really care about seeing the causes they care about showing up in advertising, and is diversity in marketing really more likely to attract them? To find out, our recent ad/marketing effectiveness survey asked 1000 13-36-year-olds to tell us how they feel about brands using everything from diverse models to Photoshop in ads. Here’s what they had to say: 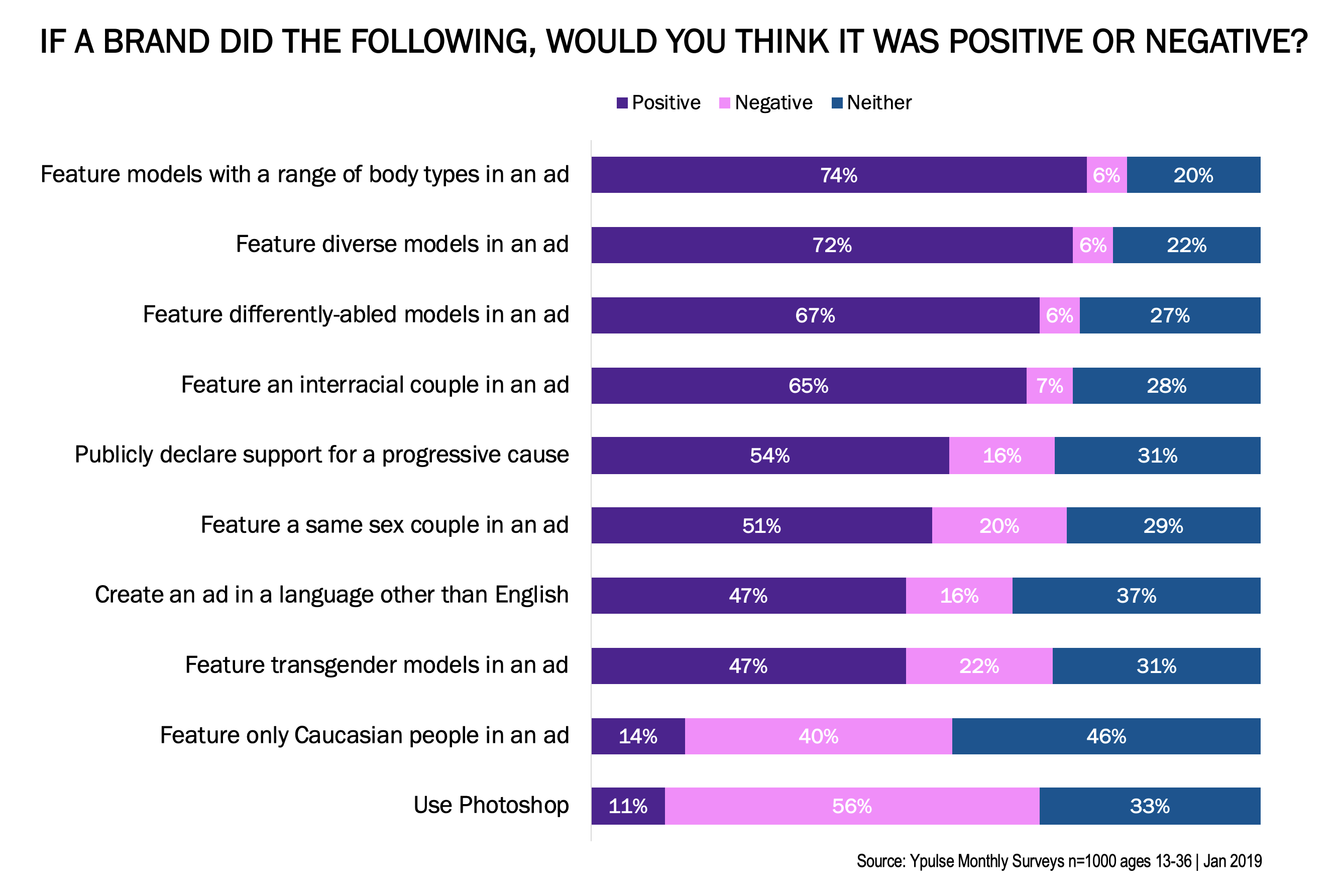 It’s clear at first glance that when it comes to diversity, the majority of young consumers are all-in. And while diversity in race and sexual orientation are certainly big issues for these gens, the thing that makes them feel most positive about a brand comes back to a trend we’ve been tracking for a while now—Body Positivity. All the way back in 2015, we found that the body positivity movement was gaining serious momentum as Millennials and teens made it clear they wanted to see all shapes and sizes represented by their favorite brands. Now, nearly three-quarters of 13-36-year-olds say ads featuring different body types give them a favorable view of the brand, and we’ve seen the success of this in action. Popular brands like Thinx and Aerie have long featured ads with a range of body shapes, and have also done away with Photoshop. Aerie’s body positive and diversity-focused campaign’s unretouched photos continue to resonate with fans and earn applause on social media. Celebs like Busy Phillipps, Jameela Jamil, Samira Wiley, Paralympic snowboarder Brenna Huckaby, and blind YouTuber Molly Burke were all brought on as Aerie’s newest class of #AerieREAL Role Models. The brand earned headlines adding these new role models to their unretouched campaign, and Twitter users posted messages about “burst[ing] into tears” of happiness. Retouching and heavier Photoshop use is clearly a practice young consumers are happy to see disappear—56% of Millennials and Gen Z told us using Photoshop in ads makes them feel negatively about a brand. We’ve seen big backlash against brands that refuse to give it up, and some startups are making a name for themselves (and eating into big brands’ sales) by making body positivity a focus.

Overall, brands that take steps to have more diverse representation in their ads will be viewed more positively by young consumers. Featuring diverse models and interracial couples both scored highly on positivity, while a full 40% said that ads that feature only Caucasian people make them view a brand more negatively. But their expectation of diversity has grown beyond different races and ethnicities being represented, or even plus-size models and inclusive sizing (though these are both musts). It’s also about including people with diverse abilities. Sixty-seven percent of young consumers told us they feel good about brands that feature differently-abled models, and campaigns that have followed suit have been celebrated. Once again Aerie has taken the spotlight in this area—last year the brand featured models with disabilities and various medical conditions. Microsoft also ran a Super Bowl ad featuring kids with disabilities this year, and though not an ad, Barbie is rolling out dolls with disabilities.

Progressive marketing moves that are less universally loved but are still worth noting include ads featuring transgender models and ads with diversity in language—though a little less than half of 13-36-year-olds feel positively about brands that take on these issues, those who said they would feel negatively about brands who made these marketing decisions were in the minority. We’ve seen a lot of support for ads that take on transgender issues or feature trans models. The trans model Hari Nef has risen to helm many campaigns, including L’Oreal, and a recent spot from Gap featured deaf transgender model Chella Man. Even the notoriously gender-binary brands Absolut Vodka and Budweiser took early plunges into trans advocacy, which means we can expect mainstream support to grow—and young consumers’ support to grow along with it.