The Best & Worst Places For Ads, According To Young Consumers 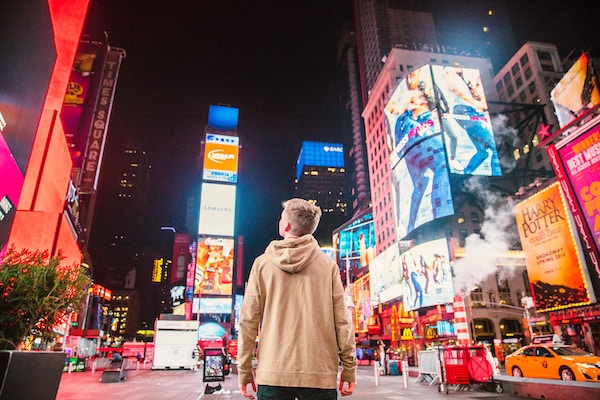 Where are Gen Z and Millennials open to seeing ads—and perhaps more importantly, where are they seeing the ads that influence their purchases?

We know that young consumers are not fans of traditional marketing—and that they’re adept at avoiding it. After all, there’s a reason we call Millennials and Gen Z the ad-skipping generations. In fact, 82% of Gen Z told Millward Brown they skip ads as fast as they can, if given the option, and another 69% percent said they physically distract themselves while an ad plays. For Millennials, eMarketer found that 59% of the gen only watches YouTube ads until they can hit skip. Ypulse found that 44% of 13-36-year-olds use an ad blocker, in our most recent survey on ad/marketing effectiveness.

While that may sound grim, reaching Millennials and Gen Z is not a lost cause—it’s about finding creative ways to engage with them. Nike’s Kaepernick ad didn’t inspire a shoe-buying spree for nothing, and Gillette’s #MeToo message went viral for a reason—Millennials and Gen  Z don’t hate marketing, per se, they just want it to feel relevant to them. And that goes for context as much as content: According to Defy Media and TMI Strategy, 13-25-year-olds are open to seeing ads that are contextually relevant and informative, so long as they don’t interrupt their experience. Case in point: Instagrammable social media posts are still hugely relevant in the world of young consumers, and are only becoming more so as influencers become, well, more influential. According to our recent survey on influencer marketing, 43% of 13-36-year-olds say that if their favorite online celebrity were to recommend a product, they would be more likely to buy it. And even more importantly, 42% have already purchased something that an influencer has spoken about or recommended, and 27% have used a promotional code from an influencer to purchase a product or service.

So, what do ad-hating young consumers really want when it comes to marketing? In our ad/marketing survey, we asked 13-36-year-olds to tell us the ads they try their best to ignore as well as the places they saw the last ad that made them want to buy something. Here’s what they had to say: 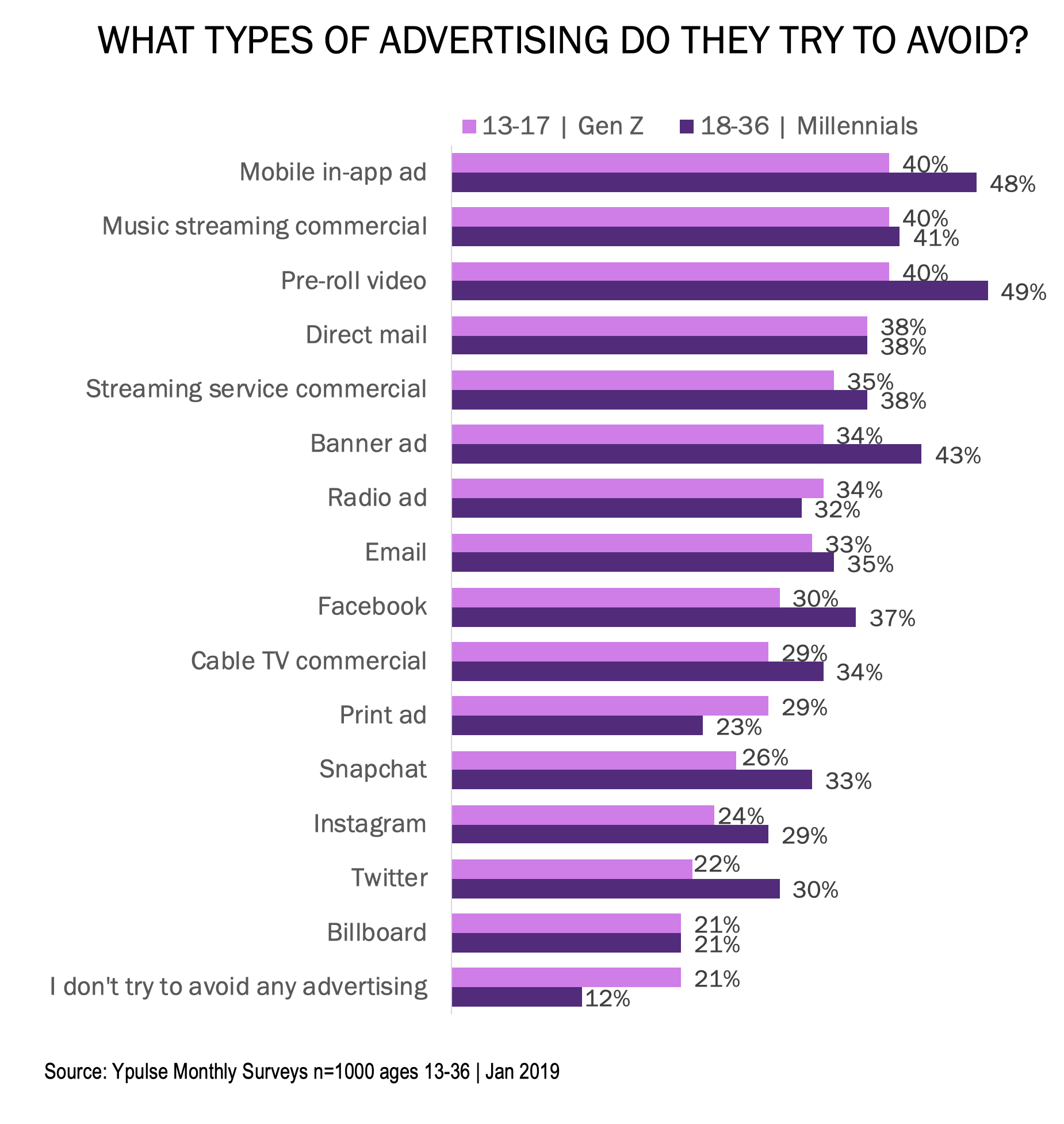 Let’s start with a big takeaway: Clearly young consumers are trying to avoid advertising, or at least believe that they are. But almost across the board, Millennials are more likely than Gen Z to say that they avoid ads of all kinds. In fact, nearly twice as many Gen Z said they don’t try to avoid ads as Millennials, showing that the digital natives may be more used to ads showing up in their digital (and IRL) space than their older peers. That said, both Millennials and Gen Z are particularly prone to ignoring pre-roll videos, mobile in-app ads, banner ads and ads that interrupt their music or video streaming services. This shouldn’t come as a surprise—young consumers’ distaste for pre-roll ads has become a punchline of sorts, with young consumers creating memes depicting representations of them doing anything else but watching an unskippable pre-roll video. In fact, 80% of 13-36-year-olds told YPulse they don’t like pre-roll ads, with 43% going so far as to say they “hate” them. Young consumers dislike mobile in-app ads almost as much, which goes back to the number one rule of reaching these generations—they don’t want to be interrupted. “Users get pumped when they get past a huge level or dive deeper into your app,” writes a marketing manager with Adscend Media. “They want to keep the enjoyment train rolling. However, they now have to sit through an ad before they can move on. It’s like they have been put in ‘time out,’ as most users see these ads as intrusive.” The same goes for the ads that disrupt their streaming services—43% of 13-36-year-olds told us they pay for an ad-free version of a streaming service.

Young consumers are less likely to try to avoid ads on social media platforms, according to our data, and that’s even more true for Gen Z. Does that mean this is the best way to reach them? Let’s take a look at what they have to say: 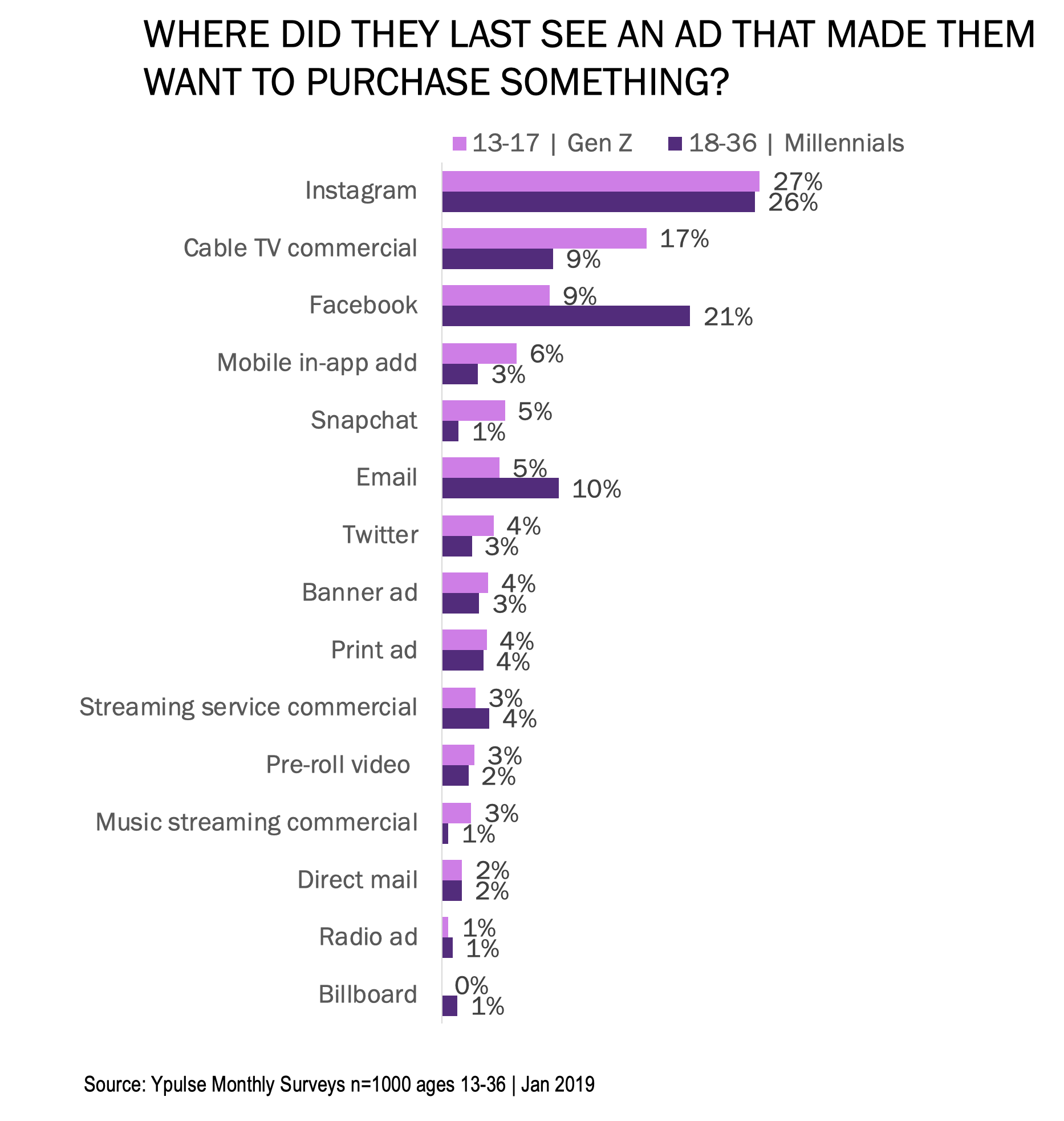 The verdict is in: Instagram is the top place young consumers are seeing ads that make them want to buy something. More than that, when combined all together, social media is by far the top type of platform to use to reach Millennials and Gen Z—55% of 13-36-year-olds listed a social media platform as the place they last saw an ad that made them want to purchase something, a huge jump over the second most-popular platform TV, which averages 12%. (This is a shift from 2018, when TV was still the top-ranking space influencing purchases among Millennials.) However, there are some generational differences when it comes to ads that worked. More than twice as many Millennials say a Facebook ad makes them want to pull out their wallets than Gen Z, and the reverse is true for TV commercials—almost double the amount of 13-18-year-olds are seeing compelling ads on cable than Millennials. The divide continues with email and Snapchat. In fact, 33% of Millennials say they like or love email ads compared to 18% of Gen Z, and though just 5% of Gen Z say a Snapchat ad made them want to buy something, that’s still five times as many as Millennials.