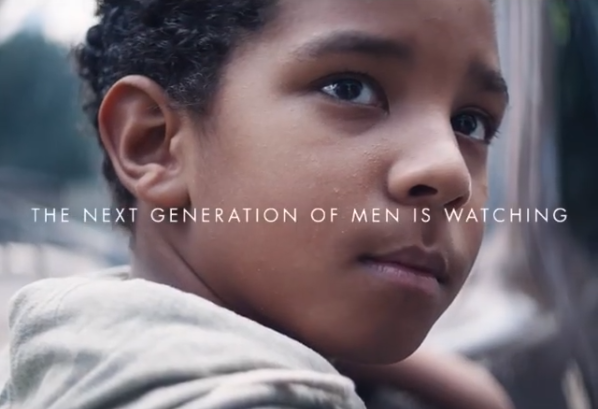 Gillette went viral when they tackled “toxic masculinity” and men trashed their products, but are Gen Z & Millennial men the ones banning the brand over the ad? Our youth brand tracker’s real-time data shows how their opinion about the personal care brand was actually impacted…

In their new campaign, Gillette tried to take on “toxic masculinity” to stand with the #MeToo movement and challenge the saying, “boys will be boys.” With their “The Best Men Can Be” effort, the brand pledged to “actively challenge the stereotypes and expectations of what it means to be a man everywhere you see Gillette”—and they launched it all with an ad that pivoted significantly from their previous marketing by showing scenes of traditional machismo and sexism and challenging viewers to “do more” to set an example for the next generation of men.

But as The Wall Street Journal reports, the internet was not necessarily celebrating their efforts. Though the spot has earned some praise, it has over one million thumbs down on YouTube—where it has earned over 28 million views since its launch on January 13th. One Twitter user explains, “The video is sad and depressing while putting ALL men in a bad light.” Some consumers even went so far as to throw out their razors and switch brands, while posting pictures and hashtags of their anti-Gillette efforts, of course. Take it from one Twitter user who wrote, “I have used #Gillette for 20 years and I will never use your shit products again. I will find a brand that appreciates masculinity. #BoycottGillette.” But P&G stood by their spot, saying that “it’s sparking a lot of passionate dialogue.”

So, was all of the backlash truly representative of the next generation’s feelings? We looked to our brand tracker to find out. Our youth brand tracker has collected nearly 70,000 interviews with 13-39-year-olds throughout the last year, tracking over 550 brands across a variety of variables, including personality, momentum, influence, and relevance. The brand tracker survey also includes an ad module that asks young consumers what ads they’ve seen recently, and then (of those ads they’ve seen) where they’ve viewed or heard them, and how they rate them. With all of these data points in hand, we looked at Gillette’s recent scores to see exactly how their bold marketing move impacted their standing with young males. The results? In short: it’s complicated.

Let’s start with their reactions to the ad itself. The new spot premiered on January 13th, so we looked at Gillette’s ad ratings over time among males 13-39-years-old to see how they’ve faired. 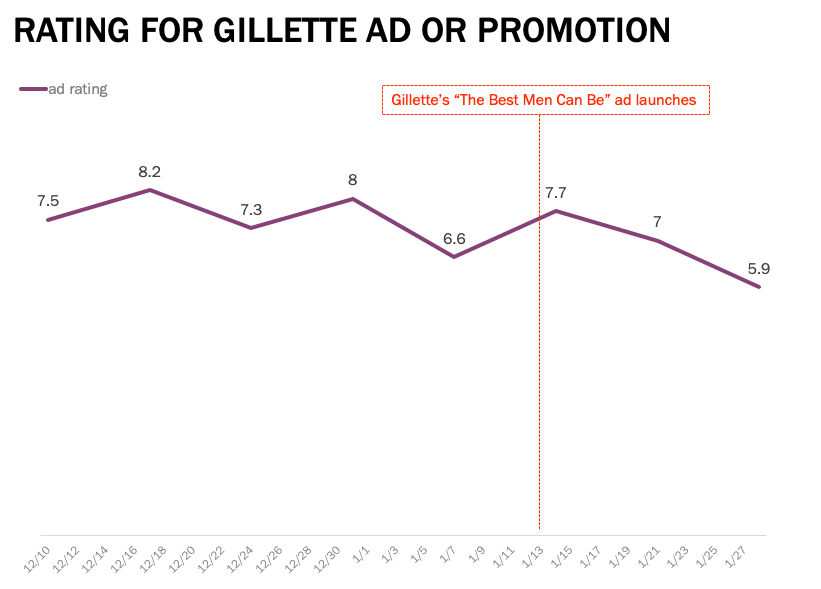 It doesn’t look good. Among those young males who have seen a Gillette ad, their ad rating score has fallen nearly two points since the launch of the spot. Unfortunately for the personal care brand, their ad seems to be more akin to Pepsi’s Kendall Jenner marketing miss than Nike’s successful Kaepernick campaign. In our Causes to Crises trend, though 75% of 18-35-year-old males agreed that brands need to make an effort to be politically correct today, 63% also agreed that brands should only get involved with causes that are directly related to the products they sell—so it’s possible that Gillette was overstepping their bounds when they took on the #MeToo movement here. Though young consumers generally do want brands to support causes, they’re looking for them to support causes that fit with the brand’s persona and products.

Though their feelings about the ad itself aren’t looking positive, things get a little more interesting when we look at Gillette’s brand scores over time on metrics like relevance, personality, and momentum. Within these categories, we ask young consumers whether a brand is popular, expresses who they are, is cool, if they plan to buy it in the future, and more. We’ll start with Gillette’s relevance dimensions, which tell an interesting story: 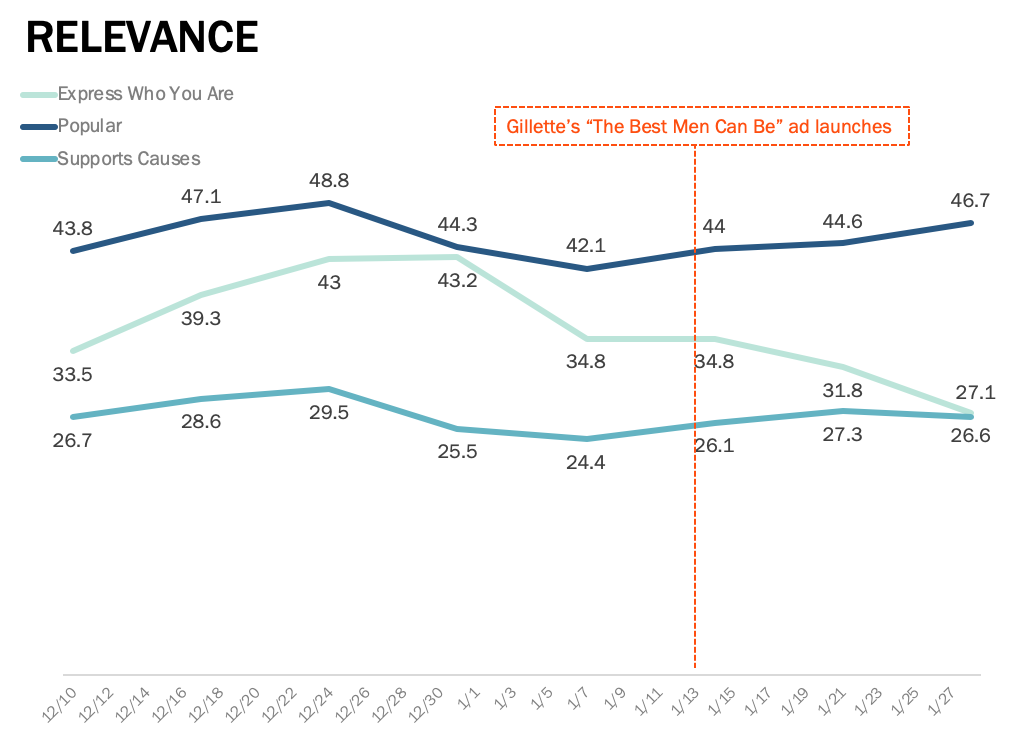 While fewer young males have been saying that Gillette is a brand that expresses who they are since the ad’s launch, their popularity scores have actually increased. So while their own feelings about the “Best Men Can Be” campaign might not be wholly positive, they still see Gillette as a popular brand—increasingly popular, in fact. This wasn’t the only score to see a lift after the controversial campaign’s start. Several dimensions of the brand’s personality scores also increased after 1/13: 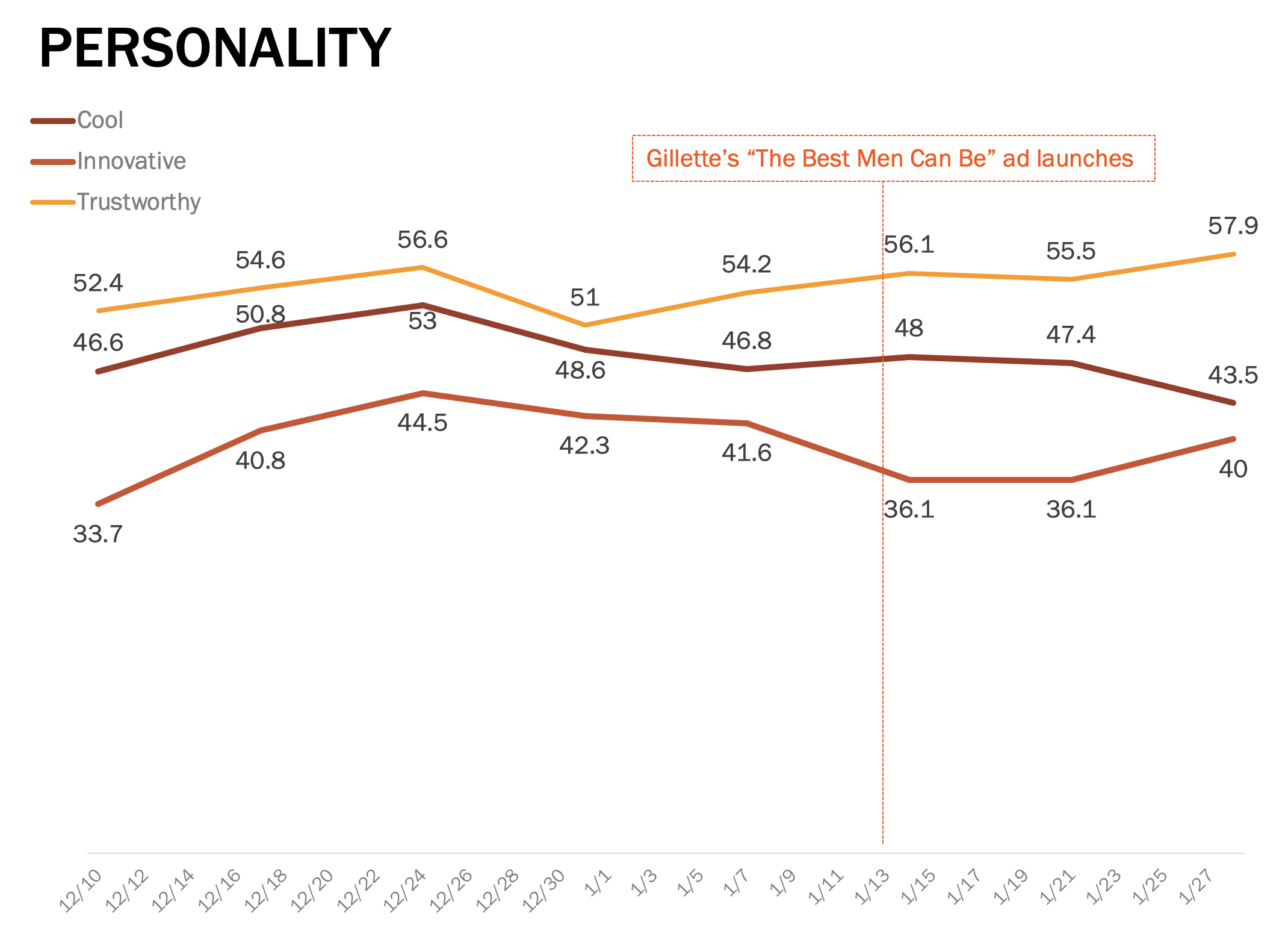 Notably, Gillette’s cool score took a hit, perhaps because of the earnestness of the campaign, or because it was such a departure from the slicker, more product-focused ads of their past. But recent scores show that young males are actually more likely to see Gillette as a trustworthy and innovative brand now than they were before the campaign. All that is well and good, but perhaps the most important metrics are next: did the brand’s risky marketing move impact young males’ plans to buy their products? 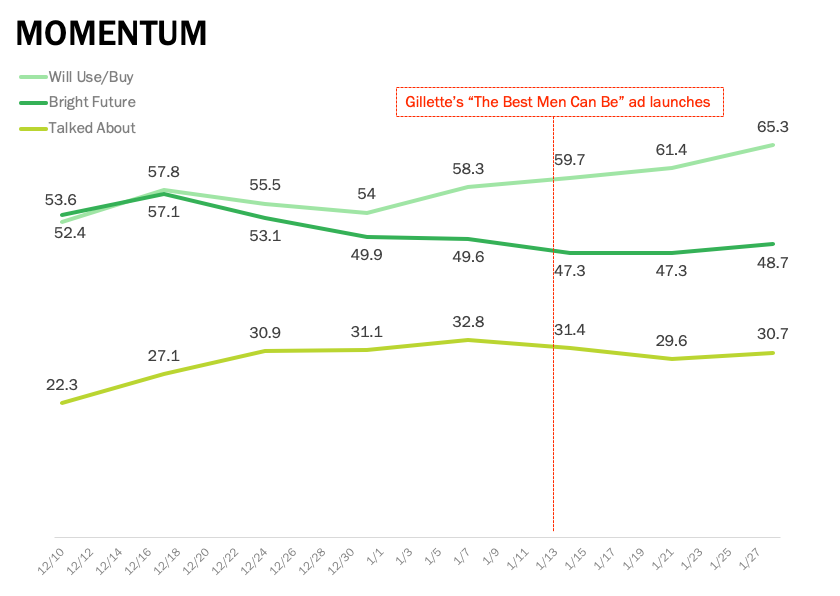 Here’s where Gillette can breathe a sigh of relief (if they were worried). Since the launch of “The Best Men Can Be,” more 13-39-year-old males tell us they plan to buy Gillette. In fact, they’re currently the highest on that score that they have been since being added to the brand tracker last year. The campaign has also not significantly impacted Gillette’s standing as a brand with a bright future in young male consumers’ eyes, and we suspect those numbers will continue to increase as time goes on.

The takeaways here are interesting. No, Gen Z and Millennial males didn’t necessarily like Gillette’s ad. But at the same time, their feelings about the campaign aren’t strong enough to deter them from buying the brand, and though they might not have liked the approach, taking a stand for something, or perhaps just generating buzz, has actually positively impacted the brand on several important metrics. Overall, we can say that among young consumers, brands are more likely to benefit from taking a stance on a cause, even if the initial reaction to their efforts aren’t entirely positive.