Black TikTok creators are getting their viral dances copyrighted, LGBTQ+ and nonbinary users are exploring their sexuality and gender on TikTok with a new filter, a “Korean iced coffee” is the hottest (and coldest) new food hack at McDonald’s, and young audiences can’t stop talking about the He’s All That trailer and Outer Banks’ new season on Netflix—plus other youth news taking over social media this week! 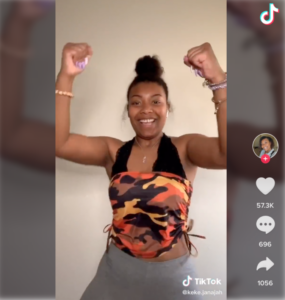 Keara Wilson & Other Black TikTok Creators are in the Process of Copyrighting their Viral Dances
Following protests led by Black TikTok creators aiming to dispel others from capitalizing on more dance moves originating from the Black community, #SavageChallenge creator Keara Wilson, who has three million followers on TikTok, plus nine more Black creators are in the process of copyrighting their moves. JaQuel Knight—the choreographer for Beyoncé and Megan Thee Stallion—became the first creator to copyright his dance moves and launched Knight Choreography and Music Publishing Inc. in April to help Black creators do the same. Knight recently teamed up with Logitech to host a dinner in Los Angeles that recognized BIPOC creators including Wilson and nine more creators, and revealed that they started the copyright process for their dances on TikTok through a system known as “labanotation”—a process of “documenting dance steps with symbols in specific patterns.” A spokesperson from Knight and Logitech’s partnership says the process can take up to four months to complete, and will be a major step for helping Black choreographers gain credit for their work that non-Black creators have been profiting off of on TikTok. Keara Wilson (“Savage” dance), Young Deji (“The Woah” dance), Fullout Courtland (choreographers behind the “Say So” dance Doja Cat performed at the 2020 Billboard Music Awards), the Nae Nae Twins (“Savage Remix” dance creators), Chloe Arnold (choreographer behind “Salute A Legend” for Syncopated Ladies), and Mya Johnson and Chris Cotter (“Up” dance) are the creators currently working with Knight and Logitech. Once Wilson’s “Savage” dance is copyrighted, she (and other creators undergoing the same process) will be able to receive payment when her moves are featured in a film, video game, etc.—or take legal action if proper credit isn’t given. 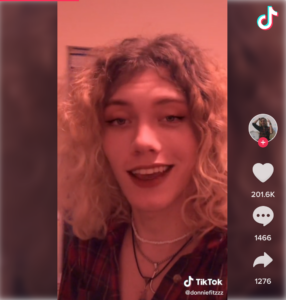 LGBTQ+ & Nonbinary Youth are Exploring their Sexuality & Gender on TikTok
YPulse found that Gen Z is more likely to identify as LGBTQ+, while our Gender Blur trend research shows that 60% of 13-39-year-olds believe that gender is fluid and we should work towards breaking traditional gender stereotypes. And thanks to a new trend, many LGBTQ+ and nonbinary teens on TikTok are using the platform to question and explore their gender and celebrate their sexuality. Using a red and blue filter, which features a red light that makes the user’s face look more feminine, and a blue light that displays more masculine features, TikTokers are, quite literally, seeing themselves in a different light. One of the most-viewed videos on the platform, which has racked up over one million views, is from Donnie Fitz, whose bio reads “any pronouns,” who switches back and forth between the filter’s two colors saying “If it was only this easy to look like this, that’d be so nice.” While the filter initially started as a way for  people to have musical duets with each other, some LGBTQ+ users are instead using it as a way to experience “gender euphoria” (a.k.a. the happiness and joy someone feels once they accept the “true” gender they identify with). Another user @violetbutnotaflower, who uses all pronouns and identifies as queer on their bio, has used the filter on their profile multiple times. The #redandbluefilter tag currently has 1.9 million views, while some related hashtags used in the same videos, like #questioninggender and #genderfluid, have also amassed millions and billions of views. This isn’t the first time TikTok has provided a digital space for people who are questioning their gender identities and sexualities to queer signal, or connect with each other: The song “We Fell in Love in October” by Girl in Red has been used on the app to celebrate lesbianism and bisexuality, while a “simple flick of the wrist” during a cue in Doja Cat and SZA’s track “Kiss Me More” has been embraced by the LGBTQ+ community on the platform. Meanwhile, queer couples have formed “TikTok families” to help LGBTQ+ youth feel safe, while LGBTQ+ content houses, like Pride House, have become more prominent on the platform as well—proving that TikTok is becoming a place where more LGBTQ+ and nonbinary youth can feel accepted. 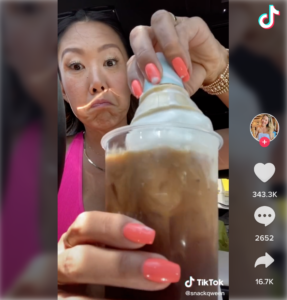 TikTokers Can’t Stop Ordering the “Korean Iced Coffee” at McDonald’s
We’ve told you about how Starbucks has been overrun by custom orders, and now, a new fast food hack and “secret” order involving ice cream and iced coffee at McDonald’s has been taking over TikTok. While the trend started to gain traction across various countries in April, it recently exploded in the U.S. in recent weeks. The “Korean ice coffee hack” or the “McBassett” (which is inspired by a drink sold at East Asia-based coffeehouse chain Paul Bassett)  involves customers ordering an iced black coffee and vanilla ice cream cone from the fast food chain, and dunking it in their cup of coffee. One of the most-viewed videos on the app featuring the concoction is from Jen Curley (a.k.a @snackqween) whose video received three million views, and was even re-shared by McDonalds. The tag #KoreanIcedCoffee has 4.6 million views so far, and features several TikTokers showing off their ice cream-fused coffee drinks as well. YPulse’s Borderless Culture trend research explores how young consumers enjoy food (and drink) trends from all over the world, and earlier in the pandemic, they couldn’t get enough of Dalgona coffee (a.k.a whipped coffee), which also originated in South Korea. This new “Korean ice cream hack” reaching the States signals how young people are continuing to enjoy trends that come from other countries. 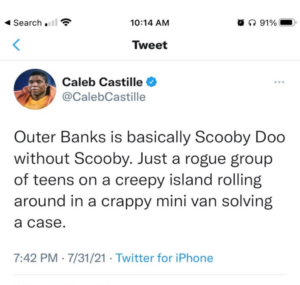 From He’s All That to Outer Banks Season Two, Netflix Teen Content is Trending
Teen movies have been making a comeback in the Netflix era with original films like The Kissing Booth and To All the Boys I’ve Loved Before franchises. Now, Netflix is developing He’s All That—a modern take on the 1999 movie She’s All That—for a new generation of teens, and the trailer’s debut is leaving fans feeling nostalgic. Millennials are tweeting about their pent-up excitement about reliving She’s All That from the lens of its OG stars (hi Rachael Leigh Cook and Matthew Lillard), with some crossing their fingers that Freddie Prinze Jr. will make an appearance. He’s All That was basically made for Gen Z by flipping gender roles and following a popular high schooler/social media influencer (played by Addison Rae Easterling, of course) who tries to turn the school’s outcast (Cobra Kai star Tanner Buchanan) into a prom king. Several nods to the original are made in the trailer—including a cover of “Kiss Me”—and while fans are excited for the next gen remake, it’s also on the verge of stirring some generation wars (still not as intense as the skinny jean debate). Need more proof that teens are excited for the new flick? When Addison re-shared the trailer on her TikTok and Instagram accounts, they received millions of views on each platform. The trailer also revealed other familiar faces including a cameo from Kourtney Kardashian as her BFF. Until then, teens’ and twenty somethings’ favorite summer show (a.k.a. Outer Banks) is back. It’s currently the No. 1 most-watched show on Netflix in the U.S., and fans are reacting to the show’s second season, begging for season three to come ASAP after an intense 10-episode run (don’t worry, no spoilers here). Young people are sharing their reactions on Twitter with two users summing it up quite perfectly: @anthonynatoli notes, “Outer Banks is THE summer show like it has legit everything,” and our personal favorite from @CalebCastille, “Outer Banks is basically Scooby Doo without Scooby. Just a rogue group of teens on a creepy island rolling around in a crappy mini van solving a case.” 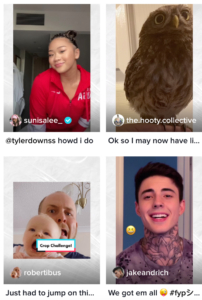 TikTok’s #photocropchallenge has users attempting to squeeze themselves (and their pets) into a moving photo grid—amassing 1.7 billion views and making two songs go viral.

Swifties are frantically trying to crack the code to Taylor Swift’s “Red” album vault release teasing who will appear in the re-recorded album this fall.

A 24-year-old TikToker is recreating Julia & Julia (yes, they’re actually making 524 recipes in 365 days) after “rescuing” a Julia Child cookbook from the street.

Cheesy, crunchy “inside out” omelets are the next food trend taking over TikTok.

Zooey Deschanel made her TikTok debut in proper New Girl fashion—racking up over 1 million likes and 24K comments in one day.

Thanks to Fenty Beauty, Rihanna is officially a billionaire.

Beloved Gen Z music stars Billie Eilish and Olivia Rodrigo were spotted hugging at the Happier Than Ever release party.

Ariana Grande and Justin Bieber’s “Stuck With U” music video from earlier in the pandemic ended up raising over $3.5 million for the First Responders Children’s Foundation.

Keke Palmer, Normani, Addison Rae, and Dylan Sprouse are among the many young celebs who reimagined classic ‘2000s movies in a glamorous photoshoot for Vanity Fair.

Speaking of Y2K, Joe Jonas gave “major flashbike vibes” while wearing a wig and strutting down the street to an old Jonas Brothers classic.

North America
This Adele x Megan Thee Stallion Mashup Has the Internet in Tears, on The Viral List
A meme of Megan Thee Stallion dancing to Adele’s “Water Under the Bridge” is racking ...
North America
#TikTokHolidays, #BackInTheDay, & 4 Other TikTok Hashtags That Trended This Month
TikTok has become home to some of the biggest trends on the internet—here are six...
North America
Blonde Hair is Cheugy Now & Looking Clean Is In, on The Viral List
Blonde hair is out and rich brunette hues are in according to Gen Z, Hilary Duff ha...