Pokémon Cards Are Dangerously Popular Again on The Viral List 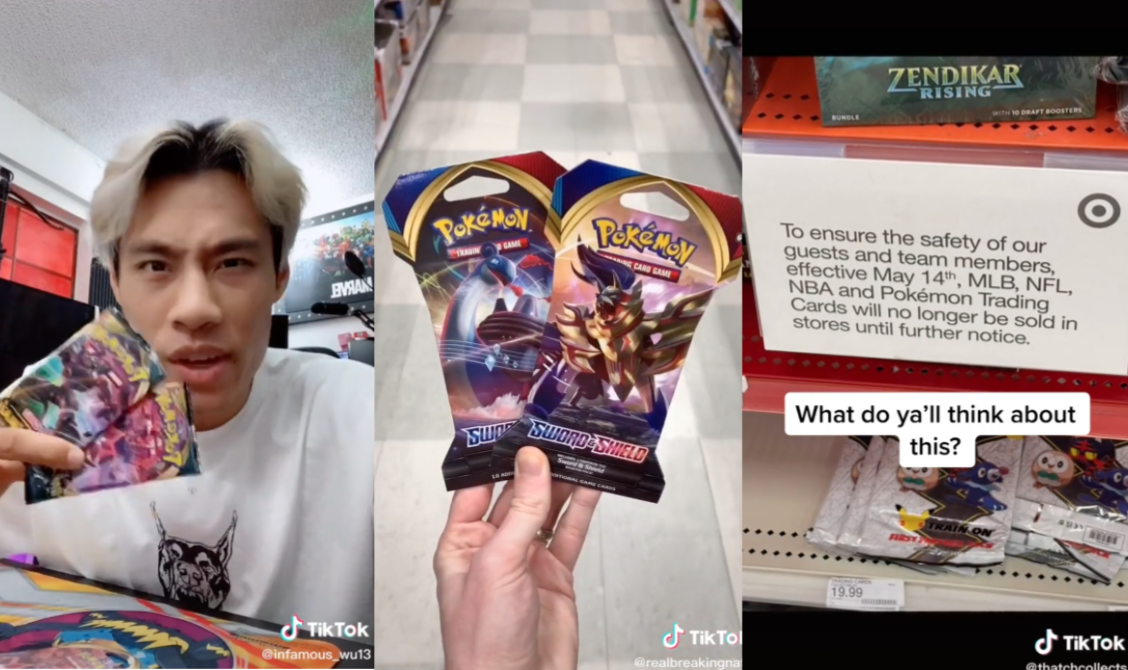 Pokémon cards are so popular again that some retailers stopped stocking them due to “unruly” customer behavior, Starbucks is being overrun with customized drink orders from TikTok, Bella Poarch just dropped her debut song and music video, and this ABBA song is causing a new nostalgic trend on TikTok—plus more youth-focused news that took over social media this week! 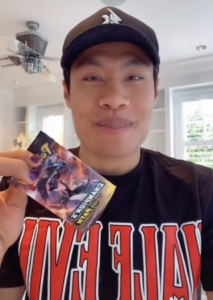 Millennials made Pokémon trading cards super popular in the ‘90s, but in recent years interest “steadily rose” once again. And in the last year, the resurged demand has led to a “scorching hot” Pokémon card market, which has just become so extreme that it brought well-respected companies “to their knees.” Last Friday, Target announced that in-store sales for Pokémon Trading Card Game packs will be stopped “out of an abundance of caution” related to the reports of “unruly behavior” among customers and the long lines outside of retail locations. Walmart also announced that they will not be restocking cards due to “inappropriate customer behavior and increased demand. A major part of the frenzy is the price that older, more rare cards are fetching. For instance, a rare Pikachu card was traded for an estimated $900K worth of cards in December, while a holographic Charizard sold for more than $311K. Cards that were once $10 are worth more than $20, and those once worth $20 are now worth $50. The newfound mania has caused card grading services and agencies to be completely overwhelmed. According to Collectors Universe, their PSA Authentication and Grading Services division has been receiving cards every five days than it used to receive over three months. In response, they doubled the size of their staff and HQ, and even had to stop taking new submissions. Card grading agency CCG reported that they had to buy a new building, and raised bonuses for new hires to be brought on so they could expand their staff. Part of the increased demand is due to emerging and established influencers who have found many viewers by streaming themselves opening new packs. YouTuber Logan Paul has reportedly spent millions on cards. Users on TikTok have been flocking to the platform to share videos, from everything to opening their card sets to showcasing their favorite ones. On TikTok, the hashtag #pokemoncards has 1.6 billion views, #pokemontradingcards has 2.4 million views, and #pokemon has 10.8 billion views. 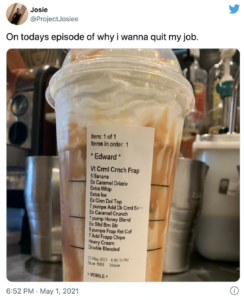 In recent weeks, customized Starbucks drink orders have been trending on TikTok and all over social media—but the chain’s employees aren’t happy. One drink order went viral after Starbucks employee Josie (in a now deleted tweet) spoke out about why they want to “quit” their job as a barista. The receipt of the order shows a caramel Frappuccino with 13 customizations that include banana syrup, cinnamon dolce topping, and seven pumps of caramel sauce. (Josie was fired from his job for “violating store policy.”) This type of extreme customized drink order is being dubbed the “Appuccino”—thanks to the rise of mobile app orders in the last year due to the pandemic. According to a recent earnings report from Starbucks, 26% of orders from January through March of this year came from the mobile app—up from 18% of orders last year. Because it’s easy to add customizations through the apps, customers have certainly been taking advantage of it. But despite some exhausted Starbucks’ employees, there are some baristas who have been getting on TikTok to share themselves making the “new and inventive custom drinks.” The hashtag #starbucksbaristarecipes has 221.6 million views, and TikToker Lizzie Dye (a.k.a @starbuckswithlizzie) has shared garnered thousands of new followers as well as millions of views. 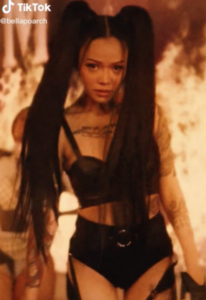 We told you how Bella Poarch’s lip-syncing video was the most viral video of last year—and it seems like she’s getting into actual singing. On Thursday night, Poarch dropped her debut song “Build a B*tch” along with a music video—and it already has eight million views and is one of the top trending videos on YouTube. It features other popular influencers and creators like Valkyrae, Mia Khalifa, Dina, Larray, ZHC, Rakhim, Bretman Rock, and Sub Urban, whose respective audiences have certainly helped the song to trend. In the dystopian, Black Mirror-esque video, Poarch and her pals are seen as “factory-made” girls who break out of and burn down the facility to go on a rampage. Prior to dropping the song and music video, Poarch (who has 66.9 million followers on TikTok) had signed a deal with Warner Records. Sub Urban, who served as producers and the creative director for the music video, has worked extensively with Songfluencer, one of the companies that we told you is turning songs into viral hits on TikTok. We also told you that other popular TikTok influencers like Addison Rae, who dropped her debut song and video in March, Dixie D’Amelio, and Chase Hudson have all recently gotten into the music business in recent months—and Poarch’s latest endeavor shows just how the trend is likely to continue. 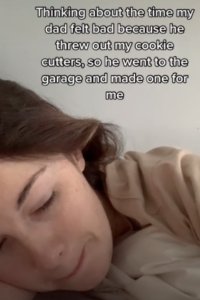 Thanks to an ABBA Song, TikTokers Are Sharing the Moments That Are “Slipping Through [Their] Fingers”
We told you how Gen Z and Millennials have been getting into older, classic songs and using them in TikTok videos, and the latest one to get the treatment is ABBA’s 1981 song “Slipping Through my Fingers” (which was also re-popularized by 2008’s Meryl Streep-led movie musical Mamma Mia!). In a new “wholesome” trend on the app, TikTokers are using the song to recount nostalgic family memories, and share other moments that inspire “aw” reactions. One of the most viral clips from the trend is from @bardtard, who shared a video at the beginning of the month that received more than 13 million views, where she reminisces on how her father once accidentally threw out her cookie cutters and ended up making new ones. A video from user @kaylablock, which has 9.9 million views, recounts the time her grandma offered to lend her the “perfect outfit” when she had nothing else to wear. The track features 37.6K videos on the app, while the hashtag #SlippingThroughMyFingers has more than 58 million views. 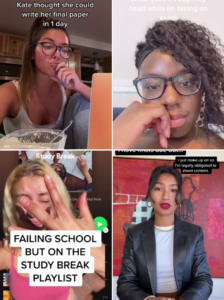 #FinalsSzn is trending on TikTok as users share how they’re getting through school and end-of-the-year tests.

From Lady Gaga to BTS, HBO Max’s upcoming Friends reunion just revealed the very many guests who will be appearing on the special.

Disney+ and Marvel Studios’ The Falcon and The Winter Soldier has taken the top spot on Nielsen’s streaming charts.