It’s June again, which means that many brands are putting their support of the LGBTQ+ community at the center of their campaigns for Pride Month—for better and worse. Last year, we warned against rainbow washing and called out the brands that were celebrating Pride Month right with transparent and actionable marketing. And 2021 has shown that young consumers will continue to call out brands who seem to be using the focus on LGBTQ+ for profit rather than true allyship. In early May, TikTokers were already “roasting” big brands’ Pride Month merch with reviews that called out some for “rainbow capitalism.”

But though there may be missteps in the process, the reality is that supporting LGBTQ+ communities and causes could be key to brands who want to reach Gen Z—and that it will need to go beyond a single month, lip service, or rainbow print merch. The reality is that the younger generation is more likely than any before them to identify as LGBTQ+. YPulse’s upcoming report exploring gender (available to Business Account users in July) asked young consumers about their sexual identification, and found that the number of Gen Z who identify as LGBTQ+ may only be growing, thanks to their more fluid views of sexuality. When we ask Gen Z and Millennials their sexual orientation, Gen Z is more likely to say they identify as bisexual and “other”: 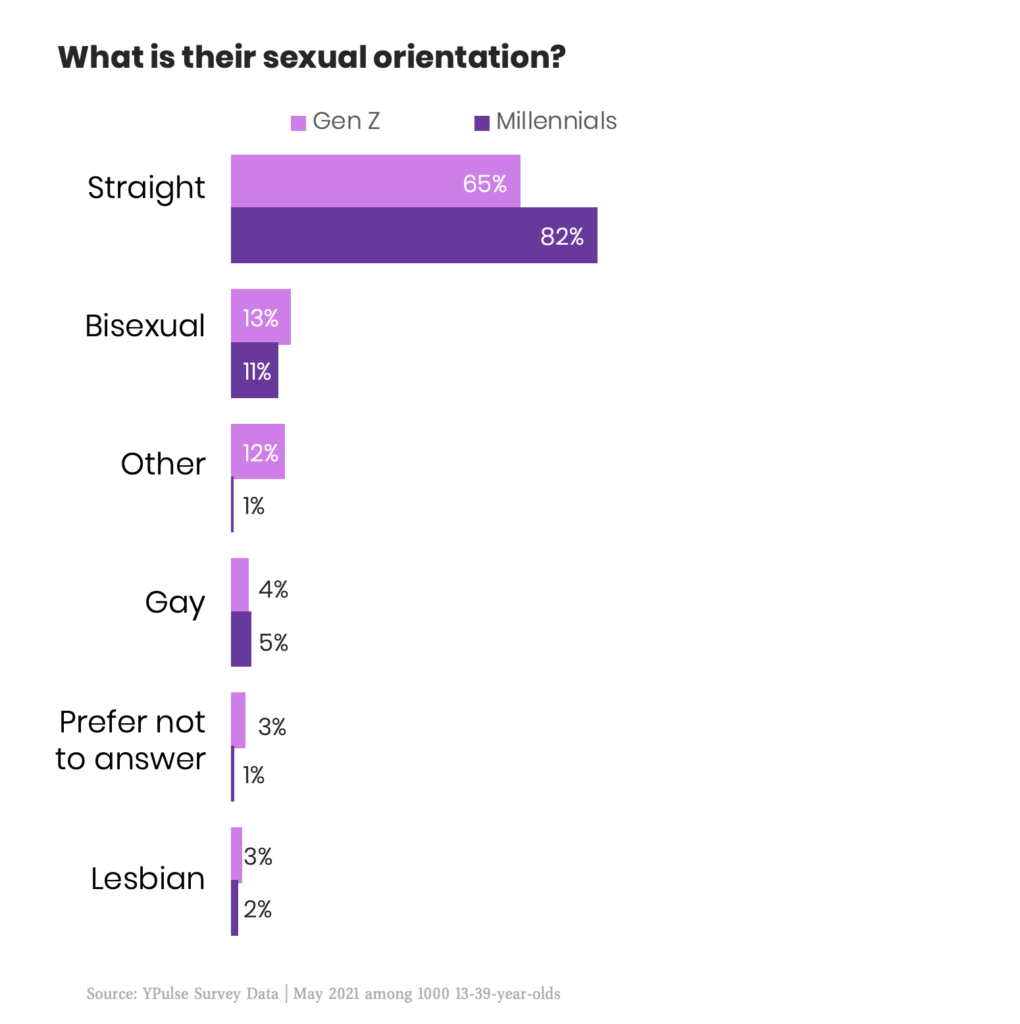 YPulse’s Finding Love Post-COVID trend report earlier this year also delved into this question, and similarly that Gen Z is more likely to identify as LGBTQ+   But we’re now seeing an increase in the number of Gen Z who identify as LGBTQ+, and specifically who identify as “other.” Specific responses show that those young people who chose “other” were most likely to say “asexual,” “pansexual,” and “demisexual” are their orientations. Our new data also shows that 57% of Gen Z agree “Most people’s sexual orientation falls somewhere in between straight or gay,” and more likely than Millennials to disagree with the statement, “You are either straight or gay, there is no in-between.”

The summary data from this question really brings home the size of the Gen Z LGBTQ+ community compared to older consumers: 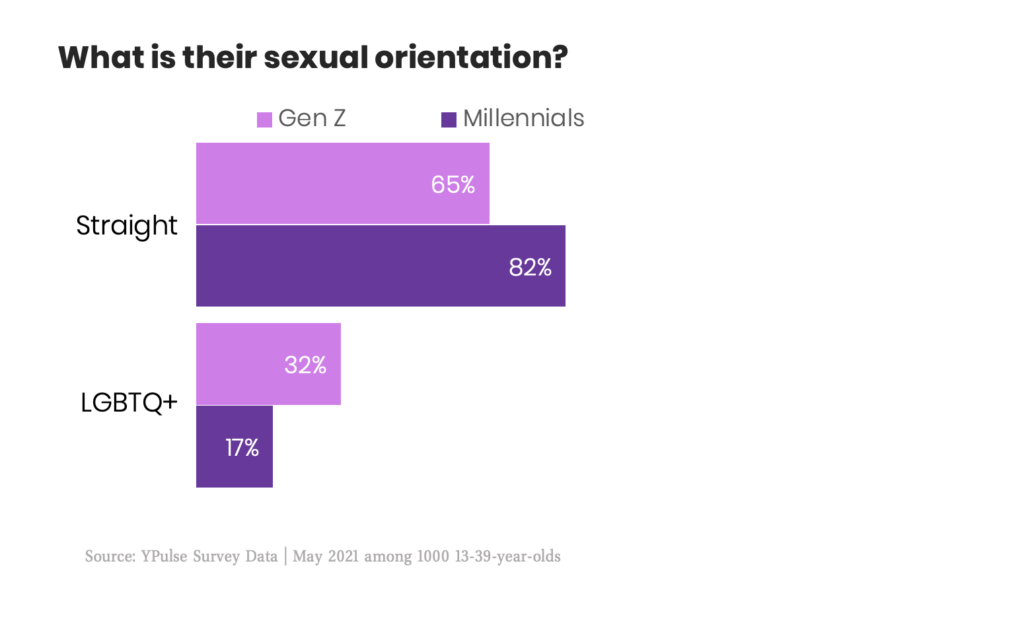 To put this in even larger context, Gallup’s 2020 data on lesbian, gay, bisexual or transgender identification finds 5.6% of U.S. adults identify as LGBT, with 86.7% of Americans saying they are heterosexual or straight. So compared to the overall population, Gen Z is drastically more likely to identify as LGBTQ, with YPulse data showing that 32% of the generation consider themselves something other than straight.

One reason behind Gen Z’s relative embrace of LGBTQ+ identities—and their openness about their orientations—is likely the more visible representation that this generation is seeing at young ages. In just the last year, many Gen Z, and young Millennial, celebrities have been vocal about LGBTQ+ rights and coming out publicly about their own identities. Seventeen-year-old super star JoJo Siwa came out as queer a few months ago, and Demi Lovato just came out as nonbinary last month. Meanwhile, Lil Nas X, who came out in 2019, fully embraced and celebrated being “unapologetically queer” in his massively popular song and music video for “MONTERO (Call Me By Your Name).” The visibility and popularity of these young LGBTQ+ stars is helping to set a precedent for teens and young people who want to come out themselves.

YPulse’s data also shows that openness to LGBTQ+ identity among the next generation of parents could be a contributing factor to the growth we’re seeing: Over half of Millennial parents and Millennials who want children say they would be completely on board if their child announced they were LGBTQ (another 30% said they would not be thrilled but it would be fine).

We’ve already told you how LGBTQ discrimination is a top cause that young consumers are passionate about, and our causes/charity and activism behavioral survey found that 41% of Gen Z say LGBTQ discrimination is a social cause / issue they’re most passionate about compared to 23% of Millennials. We saw similar differences between the two groups when we asked, “What causes would you like to see brands to get involved in?” with 41% of Gen Zs saying they want brands involved in LGBTQ discrimination, compared to 23% of Millennials. This puts LGBTQ+ causes in the top five list of issues that Gen Z wants brands to support. Considering their identities and their passion for LGBTQ+ issues, brands who want to reach the generation need to think beyond one month when it comes to LGBTQ+ representation, inclusion, and support.

North America
7 Ways Brands Are Authentically Supporting LGBTQ+ Youth—Beyond Advertising
From podcasts to inclusive social media campaigns, here’s seven brands supporting L...
North America
How P&G Is Supporting Gen Z Women in STEM
The entrepreneurial arm of this consumer goods brand teamed up with Her Campus Medi...
Western Europe
3 Stats Show Where Young Europeans Stand on Religion
Gen Z and Millennials have been moving away from traditional religion for a while. ...