The TikTok Silhouette Challenge Got Hijacked on The Viral List 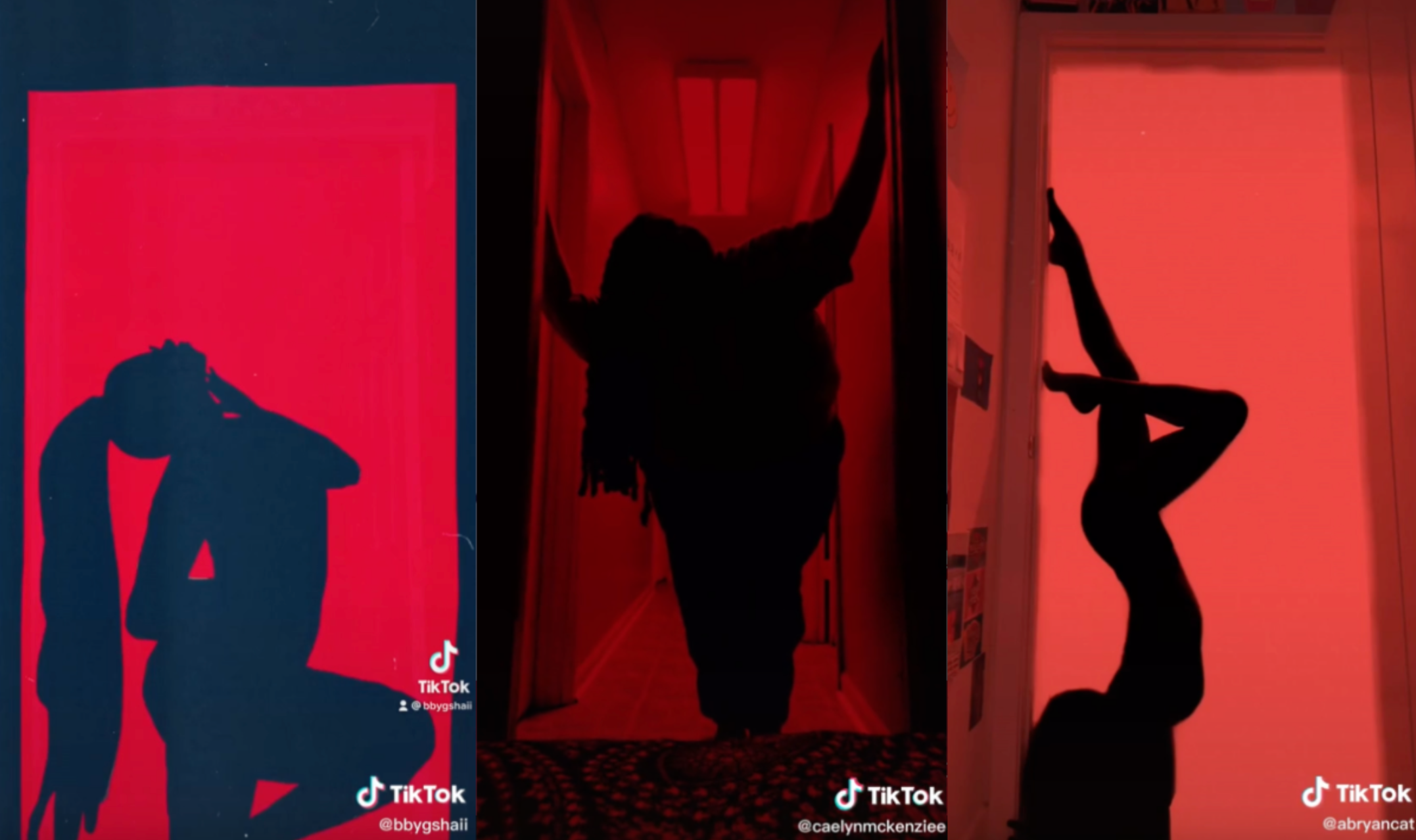 The Silhouette Challenge on TikTok has been ruined by creeps, Elon Musk is making things go viral with one word tweets, diehard Bridgerton fans are creating homegrown musicals and fuming about the Golden Globe snubs, and JoJo Siwa has come out as queer—plus more youth news to end your week… 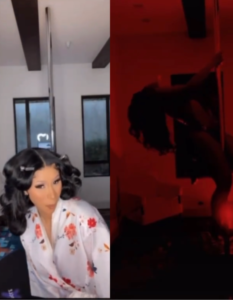 The #BussItChallenge was the first major TikTok trend of 2021. Now another has taken off on the app: The Silhouette Challenge involves users wearing regular clothing before dancing or posing (while wearing lingerie or in some cases, completely nude) when the music transitions and displays a red light. According to Know Your Meme, it started when user @yoelise (who has 34.2K followers) uploaded a video (which received 1.7 million in the span of two weeks) that included “a raw photo” of herself posing in an open door followed by an edited version of the image “made to look like a silhouette over a red background.” She also shared a two-part tutorial on how to achieve the effect (like using Snapchat’s “vin rouge” filter), which raked in more than 3.1 million views. Since then, more and more users followed the trend and posted their own renditions on the app—and it reached celebrities from Chloe and Halle Bailey, Tiffany Haddish, Common, Lizzo, Cardi B, Iggy Azalea, and many others—who all did their own takes on it. The trend features a mashup of Paul Anka’s “Put Your Hand On My Shoulder” and Doja Cat’s “Streets,” which has soared to the top of the music charts thanks to the challenge (the singer is no stranger to going viral on TikTok). While the challenge was initially praised for being body positive, it quickly took a sour turn when some people on the internet hijacked it. BuzzFeed News reported that some users discovered the r/SilhouetteUnfiltered subreddit (which has since been banned), a few Twitter accounts, and videos on YouTube that showed how to remove the red filter from clips to reveal what the person behind the silhouette is—or more accurately isn’t—wearing. This is why we can’t have nice things. 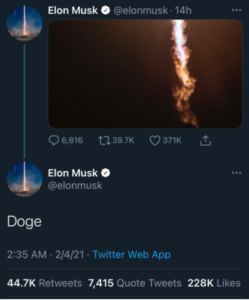 This week, Musk (who Gen Z and Millennials rank among the top people who define their generation) tweeted about cryptocurrency (and Bitcoin rival) Dogecoin with one simple word: “Doge,” which received 223.2K likes and 44.2K retweets. The tweet alone sent its value up 20% and caused it to become a trending topic on Twitter. He followed up in a series of tweets hyping up the cryptocurrency writing captions like “Dogecoin is the people’s crypto” and “No highs, no lows, only Doge.” Since then, Dogechoin has surged 44%—and according to CoinDesk, it has surged 659% this year. In the same week, Musk also brought attention to rising invite-only, audio social app Clubhouse where he tweeted it beforehand and made a “buzzy debut” at an event where he talked about stocks, SpaceX, and interviewed Robinhood CEO about the Reddit-GameStop debacle. As soon as it began, it almost immediately hit the platform’s 5K limit of attendees per chat room causing users to create overflow rooms and livestream the event on YouTube. (Facebook founder Mark Zuckerberg also made a surprise appearance on Clubhouse a few days after Musk, which also hit capacity). During last week’s stock frenzy, Musk also brought attention to it by tweeting “Gamestonk!!” with a link to the Reddit forum. And at the beginning of January, he endorsed encrypted messaging app Signal in a similar fashion by simply tweeting “Use Signal” leading to it becoming the most downloaded app on the App Store and Google Play. Whatever the equivalence of a Midas touch is, Elon Musk seems to have found it via Twitter, and if he tweets about your company or product, chances are it’ll spike in popularity in days to follow. 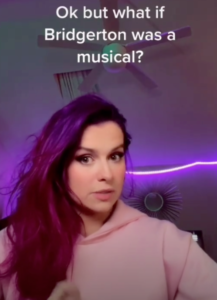 Young viewers just can’t get enough of Bridgerton. This week, Netflix announced that it is their “biggest series ever.” And last month, TikTok user Abigail Barlow (who has 2.1 million viewers) went viral after sharing a video where she turned the show into musical-form with “Daphne’s Song,” a song from the perspective of the show’s protagonist Daphne. After gaining traction, she added more parts to the musical—singing from the other characters’ POVs. A few weeks later, another song “Burn For You,” which takes place from the perspective of both Daphne and her love interest Simon caught more users’ attention—garnering 4.5 million views and has been covered and duetted by several users. Following her growing viewers, Barlow contacted friend and fellow musician Emily Bear to collaborate on the production of the songs for each video. Up until this week, Barlow and Bear continue to add even more parts to the musical. This isn’t the first time a homegrown musical went viral on TikTok: In November, users created a Ratatouille musical that blew up and ultimately became a Broadway benefit (their most successful to date) for the Actors Fund. Meanwhile, fans of the show criticized the Hollywood Foreign Press Association for not giving the show any nominations at the Golden Globes this year. 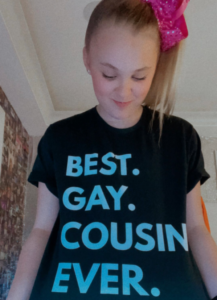 JoJo Siwa Came Out & Fans Are Showing Their Support

Last month, fans speculated that JoJo Siwa came out as queer—and she did so via TikTok in a video (that received more than 30 million views) where she lip-syncs the words “No matter gay, straight, or bi, lesbian, transgender life, I’m on the right track baby, I was born to survive” from Lady Gaga’s hit song “Born This Way.” Soon after, Kent Boyd of the LGBTQ TikTok group Pride House, posted a video (garnering millions of views)  of the group dancing with Siwa to Paramore’s “Ain it’s Fun” with an emphasis on the lyrics “Now you’re one of us.” Then, JoJo tweeted an image of herself (that has 1.3 million likes) wearing a shirt that reads “Best. Gay. Cousin. Ever.” She later thanked her young fans in a separate video after an outpour of support from them—and is setting a new precedent especially for other teens who want to come out. And this week, during an interview on The Tonight Show Starring Jimmy Fallon, she revealed that it was her “perfect” girlfriend who encouraged her to publicly come out. This isn’t the first time Siwa has gone viral recently: Last month, she also grabbed the internet’s attention after parents criticized a board game that Nickelodeon and Spinmaster released that included “controversial” playing cards, and ultimately led to remaining stock being pulled from the shelves. And last year, she shared a video of herself participating in TikTok’s viral “Wipe It Down” challenge—racking up millions of views. It shouldn’t come as a surprise that Siwa continues to go viral considering the former Dance Moms star’s fan base: The 17-year-old pop star has millions of followers on each of her social platforms—TikTok, Instagram, and Twitter. And she seems to have no shortage of upcoming projects: Nickelodeon and Awesomeness Films just recently announced that she’ll be headlining their musical film The J Team. YPulse’s research found that LGBTQ rights is one of the top social causes that young people are passionate about, and our Finding Love Post-COVID trend report found that Gen Z are more likely than older generations to have non-binary sexual identities. 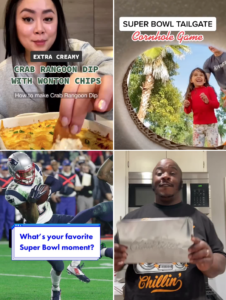 To prep for the Super Bowl on Sunday, TikTokers are using the hashtag #tiktoktailgate (which already has 44.5 million views) to show off how they’re celebrating and what they’re eating.

From Justine Skye to James Charles, the “I’m Busy” challenge is the latest trend on TikTok occupying bored celebrities.

Along with the rage of the Bridgerton snubs, many fans were upset that Netflix’s Emily in Paris got nominated (even one of the show’s own writers) when HBO’s Michaela Coel-led series I May Destroy You got zero nominations.

Gen Z is “roasting” Millennials for having side parts and wearing skinny jeans.

Following #BeanDad as Twitter’s main characters of 2021, a man has accidentally been obliviously using Arm & Hammer dog shampoo on his own hair, while a woman who used Gorilla Glue in place of hair gel got her hair stuck.

A council meeting that took place on Zoom took a “chaotic turn” and has inspired several memes. 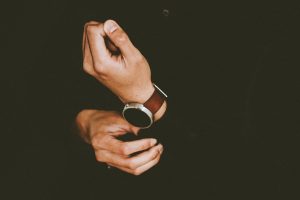