We turned to our on-demand survey platform to find out what’s really going on with Gen Z, Millennials, and encrypted messaging…

Encrypted messaging apps have been making big headlines in 2021. As privacy concerns over Big Tech companies grow, millions of users have reportedly downloaded Signal and Telegram this month—making them the “hottest” apps globally. Signal allows messages to be sent with “end-to-end encryption” and became popular with young people during last year’s Black Lives Matter protests, while Telegram offers some encrypted messaging options, but is “largely popular for its group-based chat rooms where people can discuss a variety of subjects.”

Concerns about Facebook-owned WhatsApp’s new privacy practices have created the surge in new users of these messaging alternatives. At the beginning of January, the app (which YPulse data shows 22% of young consumers were using in November of 2020) announced some privacy policy changes that spooked users and created serious backlash. According to Apptopia, Telegram added more than 25 million users in early January, pushing it to over 500 million users—adding nearly 1.3 million users in one single day. Meanwhile, an Elon Musk endorsement (the billionaire tweeted “Use Signal” on January 7th) helped Signal become the most downloaded app on the App Store and Google Play. While the exact numbers leaving WhatsApp to join Signal are unknown, the “sudden growth” caused widespread outages for the app as the company struggled to add an “extra server capacity” for new users.

With this encrypted messaging gold rush underway, we used our on-demand survey platform PULSE to ask young people exactly how many are using an app like Signal and Telegram, and dug into why messaging privacy is increasingly important to them. We started with the basics: 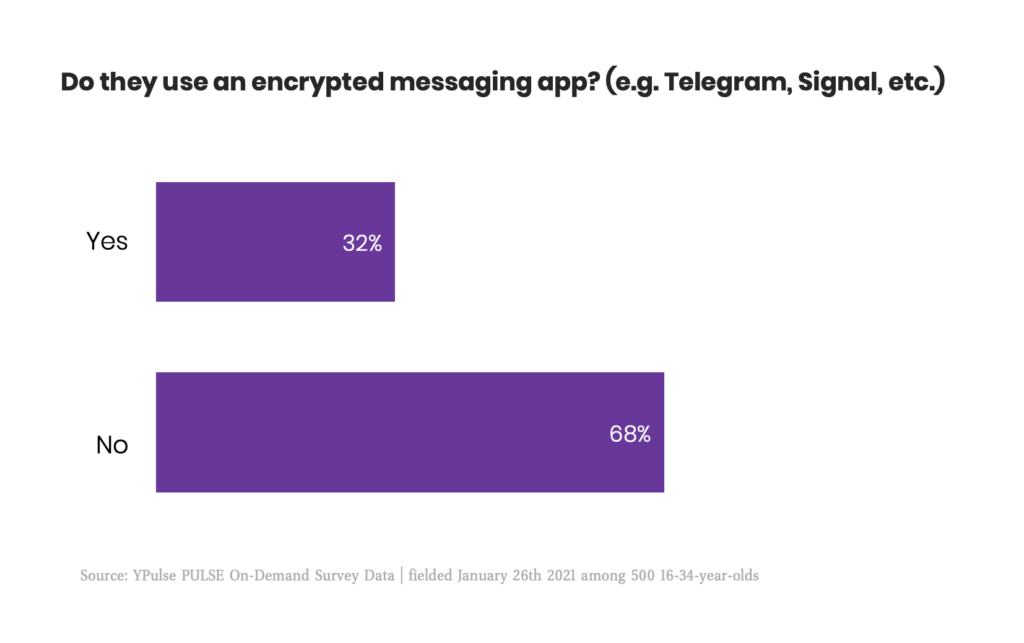 Nearly a third of 16-34-year-olds who took our real-time survey told us that they use an encrypted messaging app. That’s a significant number of young people. In some ways, this is a continuation of the privatization of online conversations that has been happening for some time among these generations. There has been much talk over the last few years about an increasing amount of young consumers’ online activity occurring on “dark social” spaces—i.e. messaging platforms. In 2018, YPulse called out dark social as a growing trend explaining, “This shift from social media to more private chat communities and the preference for chat features over public broadcasting on social platforms means that “dark social” is having a moment. Opinions and recommendations are being shared out of the spotlight, where brands can’t interfere or serve up related ads. Marketing is cut out of these more intimate conversations between friends, and efforts to reach young consumers on popular apps are being undercut. In 2018, brands will need to reexamine their approach on social and beyond, and find new ways to reach Gen Z and Millennials that respect their desire for privacy and private spaces.” Now, we see that a third of young people want those conversations to be even more protected and private turning to alternative platforms to ensure that they are. 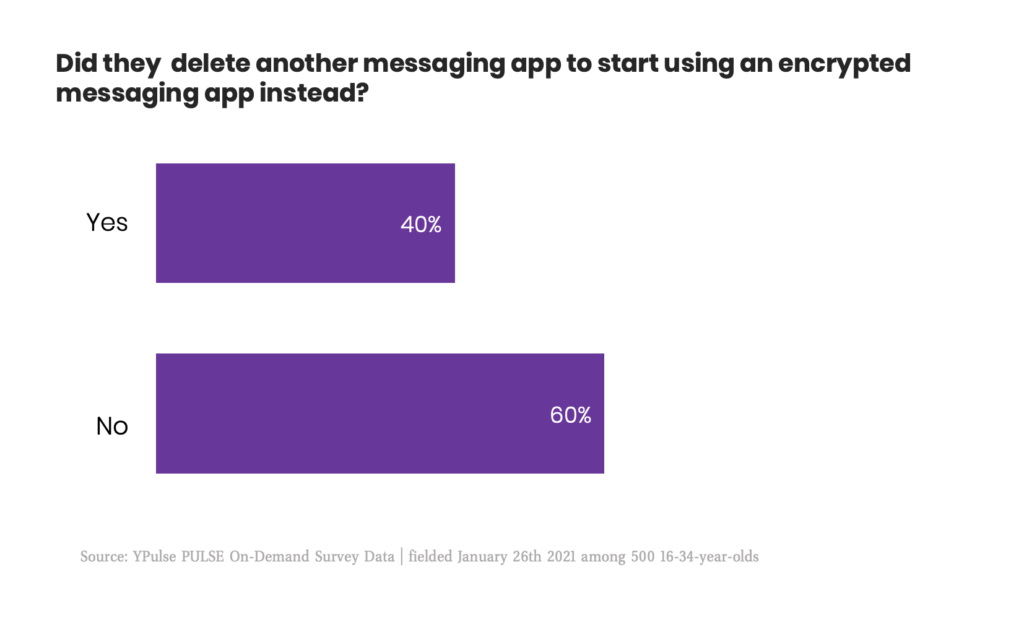 Among those who are using an encrypted messaging app, two in five tell us that they deleted another messaging app to switch over. WhatsApp has announced that their new privacy policy has been delayed as they try to clear up “misinformation causing concern” about the changes. It’s clear that they need to, and that all messaging app might need to start getting more clear about their privacy standards in order to keep young users around.

So what’s behind the seemingly heightened interest in keeping conversations private and secure? Our PULSE survey asked young people why they’re using encrypted messaging and found an array of factors at work: 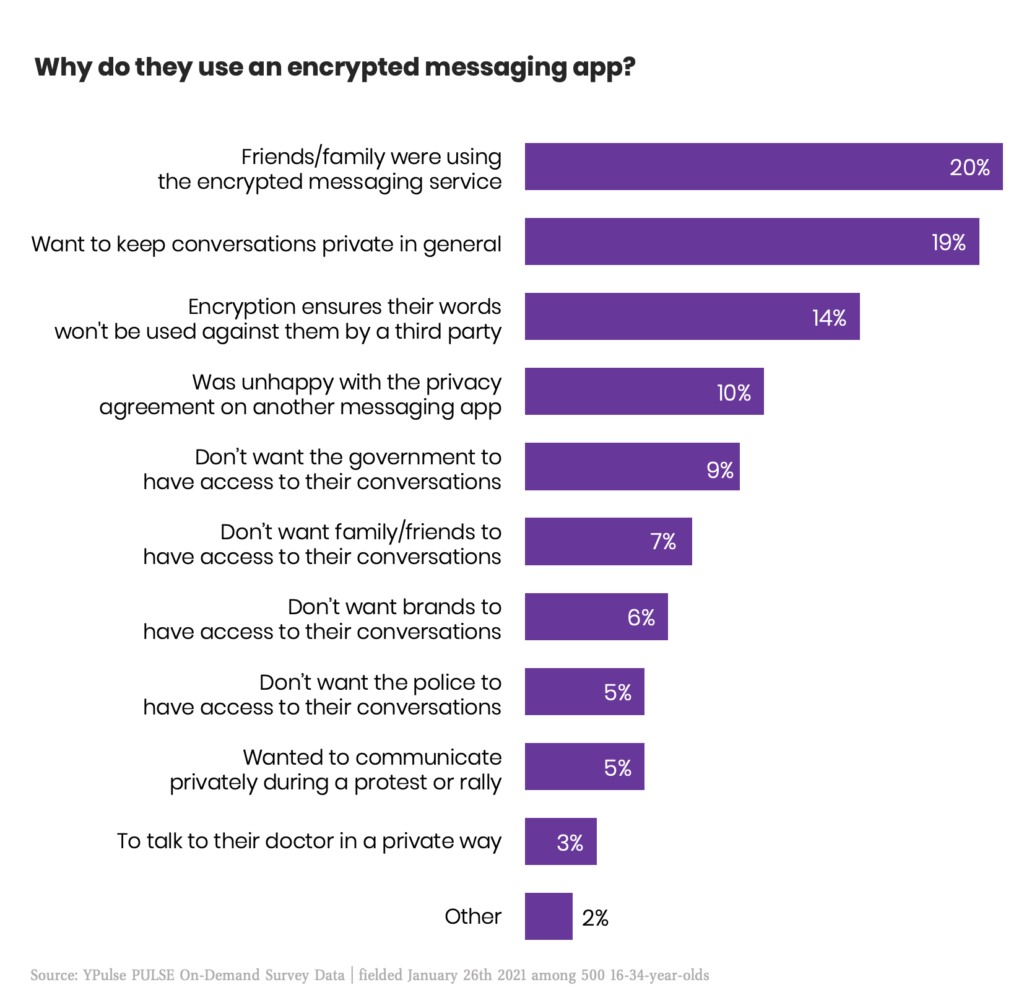 The top reasons that young people tell us that they use encrypted messaging are that their family or friends were using the service, and that they want to keep their conversations private in general. The first is hardly a surprise. Word of mouth has always been one of the strongest influences over Gen Z and Millennials, and if their loved ones are using a messaging app they would naturally be inclined to jump onto it in order to communicate with them.

Wanting to keep their conversations private in general is a nearly equal motivation, pointing to young people’s overall interest in the security of their data and personal information. YPulse has explored this in the past and recently found that 84% of 13-39-year-olds agree with the statement “I worry about my privacy online.” Who they want their conversations to remain private from depends on the user, with close numbers of young people naming the government, friends and family, brands, and the police as concerns in our survey today.

North America
Taylor Swift is The Newest Celebrity Private Jet Controversy on The Viral List
TL;DR Taylor Swift has been called out for having the highest emissions of...
Western Europe
3 Things Brands Should Know About Young Europeans’ Fitness Routines
We know that health and fitness are important to Gen Z and Millennials. But after t...
North America
The Top 10 Retail Apps Gen Z and Millennials Are Using
Retail apps are the bottomless scroll feed of the online shopping world… TL;...