Redditors Trolled Wall Street & Made Millions on The Viral List 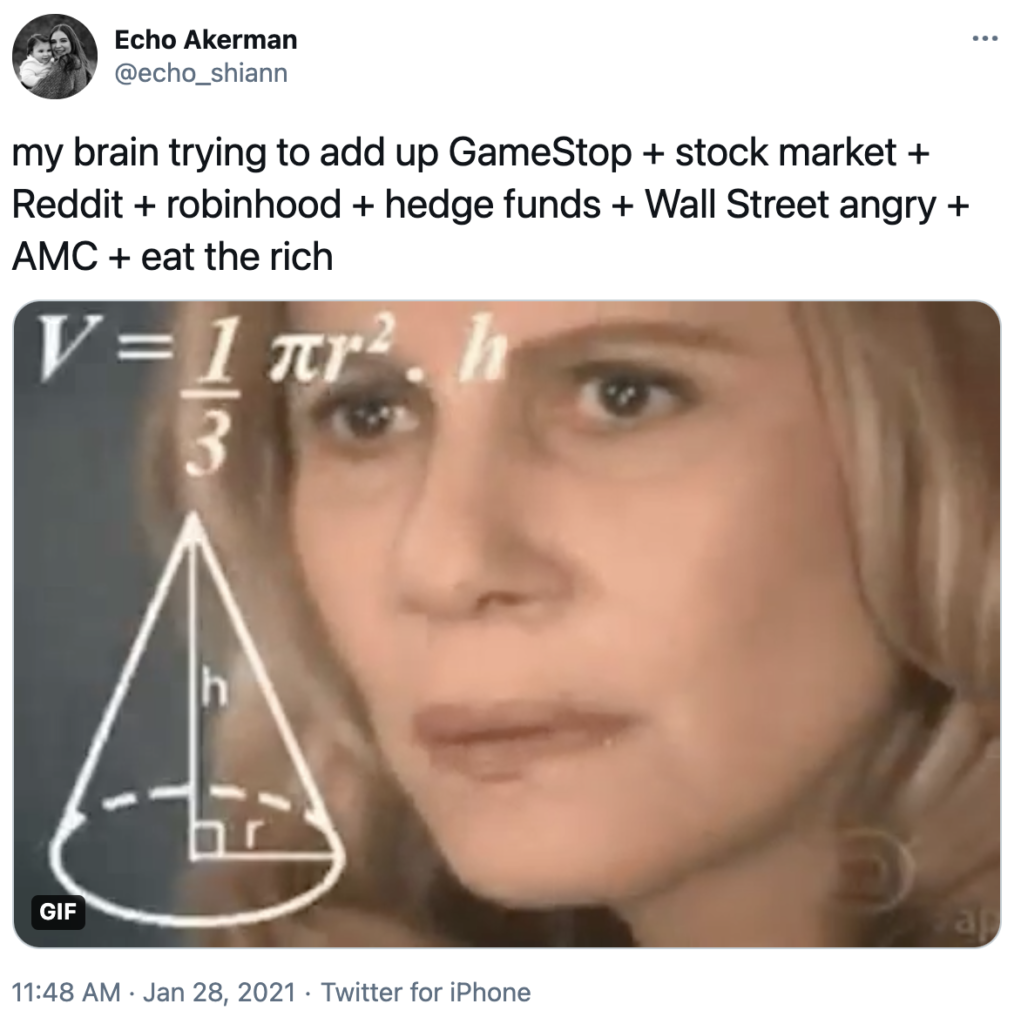 Ok, where do we even start…If you haven’t heard about the battle of the Reddit board versus the Wall Street elite, you have missed a scandal that spans message boards, business headlines, and memes galore. Earlier this week in an unexpected “David vs. Goliath story,” Reddit users on the forum r/WallStreetBets helped drive “a meteoric rise” in the GameStop’s stock price, forcing it to halt trading several times and causing “a major headache” for short sellers from hedge funds attempting to bet against it in hopes that the stock falls. In the wake of their “meme stock” success—with stories of overnight financial boons making headlines—they also caused AMC’s stock to surge. The group used a Discord server, which many flocked to in recent days, to transform itself into a “virtual trade floor” gaming the stock (or as they jokingly call them “stonk”) system. And at first, it seemed like the little guys were winning. However, Robinhood and TD Ameritrade blocked users from further trading any Gamestop or AMC stock—prompting everyday traders to flee Robinhood, which seemed to be siding with “the rich.” The reactions of trading apps and platforms have spurred backlash from politicians and public figures like AOC, Ted Cruz, and Mark Cuban. Plenty are confused by the ins and outs of the quickly moving financial news, and experts have rushed to try to explain it, sometimes creating their own viral content in the process: talk show host Trevor Noah created a The Big Short homage segment parodying Margot Robbie’s iconic scene from the film, which has been viewed thousands of times. Elon Musk even got in on the debacle by posting a tweet (which garnered 216.5K likes and 34.8K likes) simply reading “Gamestonk!!”and sharing the link to the forum on Reddit. But confusions didn’t stop the memes. Since the blow up, movies like The Big Short and The Wolf of Wall Street have been back on people’s radars, and of course, users on social media are using them to make memes about the whole messy event. Jokes about millionaires losing their boats, modern day robber barons “sobbing into their martinis” and instant stock market experts were everywhere. The saga is certainly ongoing, and could result in lawsuits and legislation—which will, of course, be broadcast via meme. 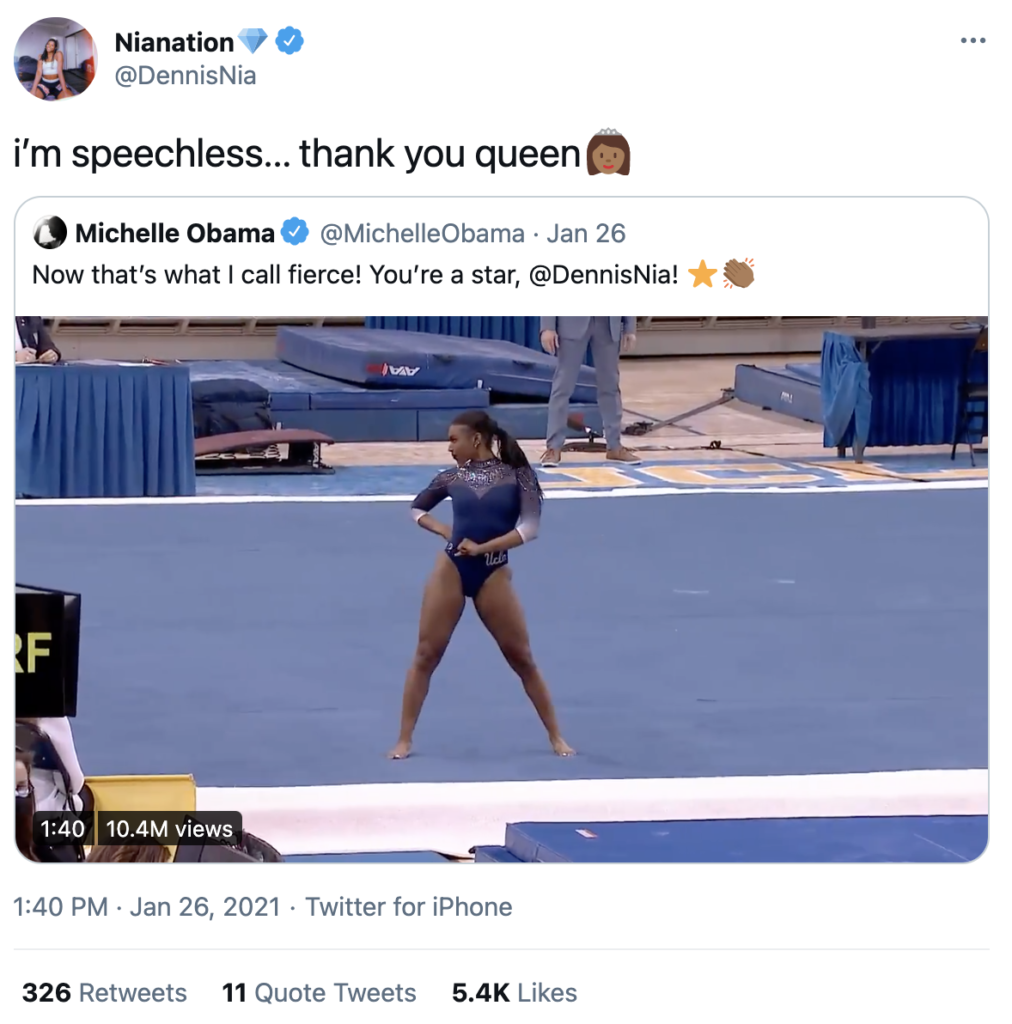 A young Black gymnast has continued her streak of stunning the internet with her impactful floor routines, the latest of which has prompted shoutouts from Missy Elliott, Simone Biles, and even Michelle Obama. UCLA gymnast Nia Dennis first went viral last February with a Beyoncé-themed floor routine that earned her an almost perfect score and got the attention of Alicia Keys and now Vice President Kamala Harris for Dennis’s confidence and celebration of Black culture. Now, she’s done it again. Her latest routine, performed last Saturday, incorporated her culture once again, was to music by Kendrick Lamar, Missy Elliott, and Tupac, and helped her team take the win. But when UCLA Gymnastics posted a video of the routine with the caption, “This is what #blackexcellence looks like.” It also won the internet, earning 10.4 million views on Twitter and getting re-posts from celebrities galore. On a The Ellen DeGeneres Show appearance, Dennis elaborated on the meaning of her routine: “I picked a lot of really influential artists, Black artists that had a huge impact in the Black community. For starters, Kendrick Lamar. You know, he’s a huge activist in his music…We’re not allowed to use words and sounds in our floor routine so I figured if I wasn’t going to be able to say it, I wanted to do it in a different way.” The Black Lives Matter movement gained tremendous momentum in 2020 (especially among Gen Z), and it is clear that some of the generations’ most influential voices are making sure to keep the momentum going. It’s also clear that Nia Dennis is a rising athlete (and star) to watch. 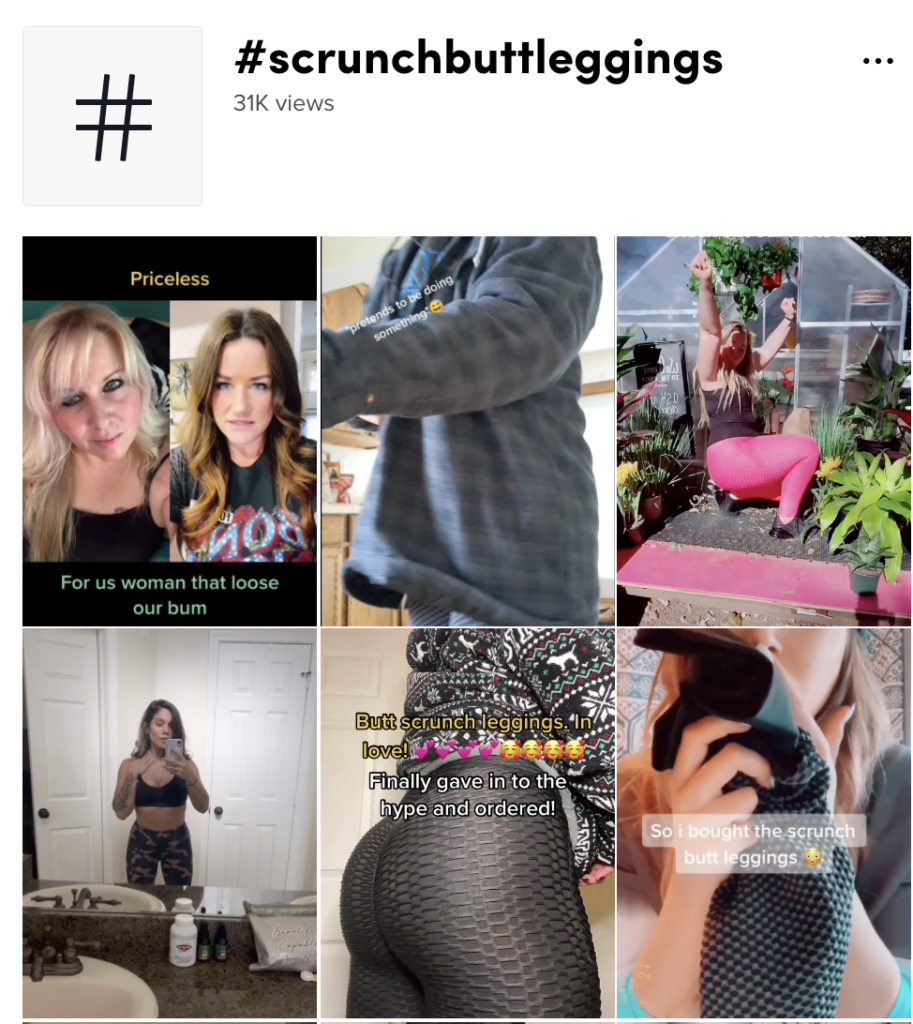 TikTokers with a passion for a product and a simple hashtag have helped create sell out hits for brands over the last year, and the trend is certainly continuing into 2020. This week, the platform became obsessed with a pair of “Butt Scrunch Leggings” from Amazon. (Yeah, we didn’t think we’d ever type that either.) According to Refinery29, the popularity of the under-$25 Seasum brand leggings has been percolating for some time, but Lizzo sent them into viral fame this week with a twerking video in the ruched-seam item that has earned over 230K likes. Meanwhile, #scrunchbuttleggings has over 31K views on the platform. That’s not the only product getting a sales-boost from the video app this year. Earlier this month, TikTok was also “going nuts” for NYX’s Shine Loud High Shine Lip Color, with users posting video after video testing out the lipstick and its budge-free properties. BuzzFeed called the lipstick “TikTok’s latest ‘It’ product.” What do many of these TikTok-beloved products have in common? Surprising quality at a low price point seems to be a unifying theme—young consumers love a bargain they can tell a friend (or thousands of followers) about. 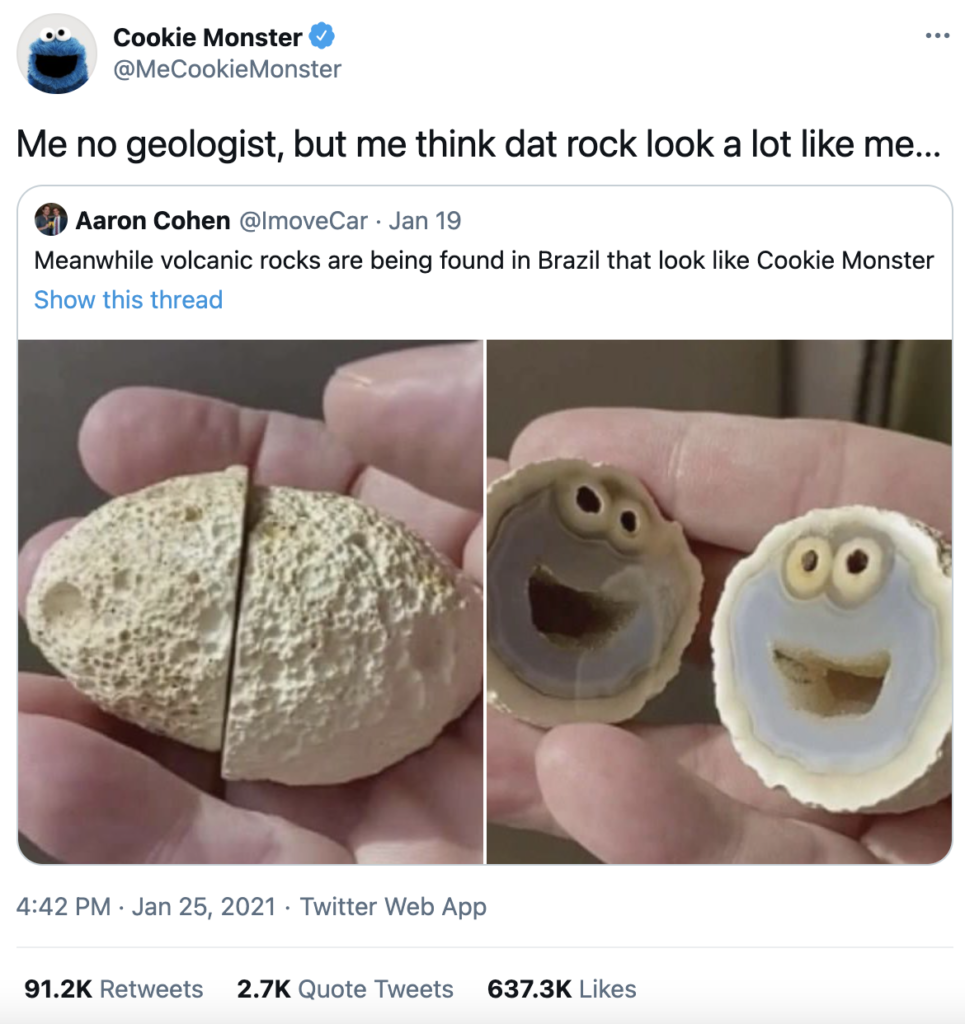 A geode that looks just like Cookie Monster isn’t just cute and being watched by millions, it could be sold for $10K.

“When COVID is over…” is the meme summarizing the endless feeling of the pandemic.