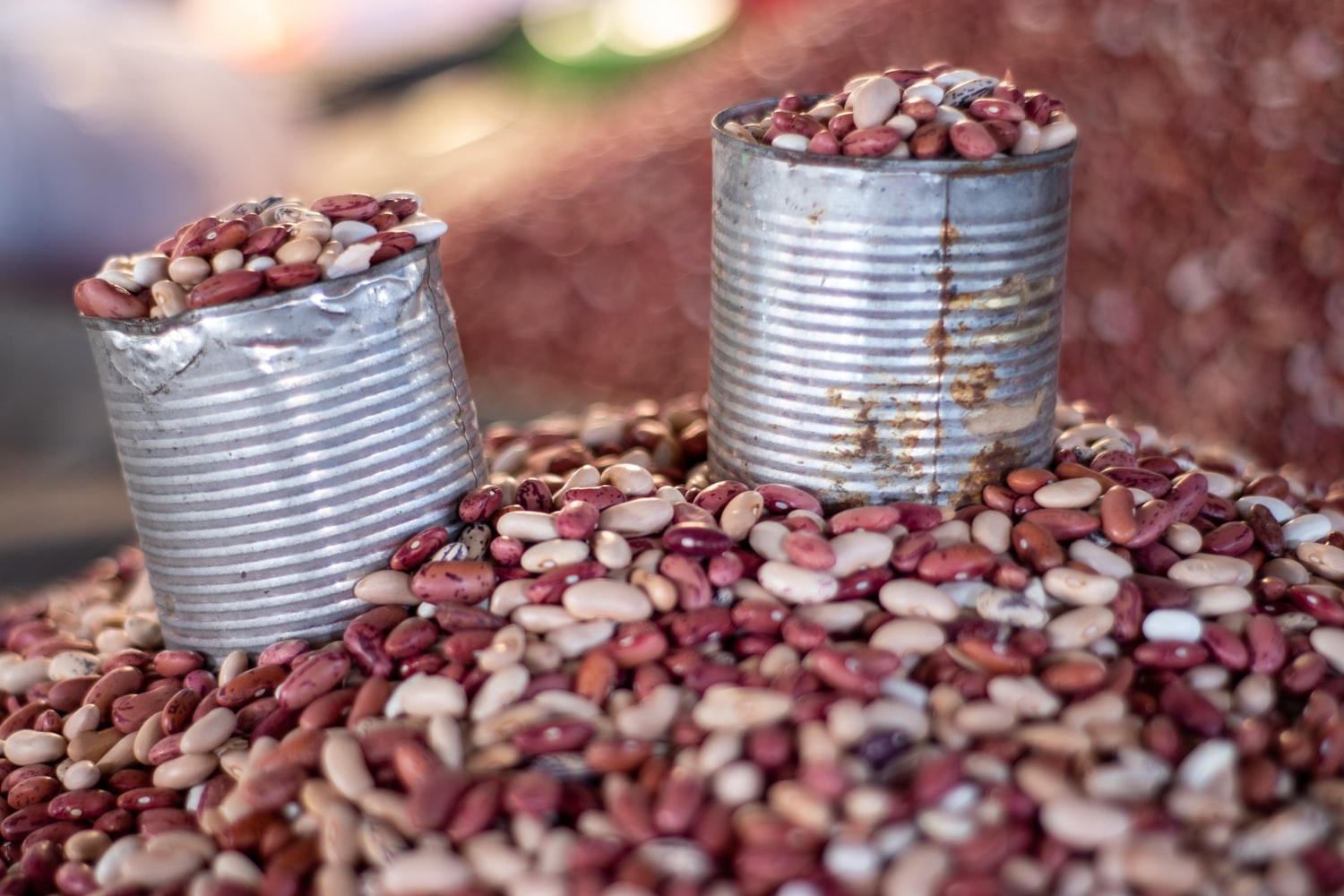 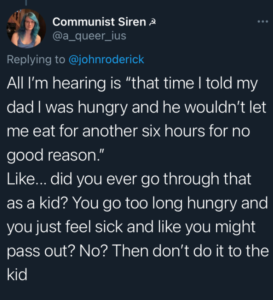 Two days into the new year, musician and podcaster John Roderick started a lengthy thread on Twitter sharing a story about making his nine-year-old daughter figure out how to use a can opener before she could eat a can of beans. In his post, he stated that he wanted to create a “teachable moment” by insisting that she “figure out” how to use it for the first time before she could eat—which took her six hours. Users were quick to react—and they weren’t happy. One user responded: “From one Dad to another, this story is nothing to be proud of” while others cursed at him. Other users are already calling him Twitter’s “first main character” of 2021. The podcast “My Brother, My Brother, and Me,” which previously featured Roderick’s music, announced on Twitter that they would no longer be using his music on the show following the controversy. The post (and his account) have since been deleted but before deactivating his account, some users discovered and resurfaced his old “racist and anti-Semitic tweets.” In an apology letter, Roderick stated that he deleted his account “in a panic” and used that time to reflect on what he had done and the hurt he caused. Cancel culture was a big part of 2020—and it’s coming in strong during the start of the new year as young users on social media aren’t shying away from calling out problematic behavior. 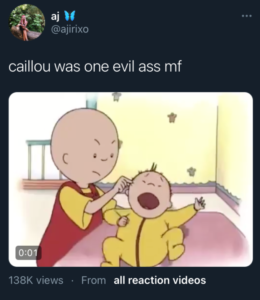 Speaking of cancelling…PBS announced that their animated series Caillou has been cancelled after 20 years on air. The show followed a “precocious boy” who went on various adventures with his friends and family. It ran for five seasons and 144 episodes until 2010—when it finally went “into syndication” on PBS. PBS Kids first made the announcement on their Twitter account, which received 19.4K likes and 3.3K retweets. While some kids may mourn the loss of the show, parents certainly had a different reaction to it. It seems like the majority of parents are overjoyed by the news. Many of their comments that expressed excitement about the show’s cancellation called the titular character everything from a “little whiny ungrateful crybaby” to a “bad influence” to “one evil ass mf” and calling out his “stupid tantrums.” 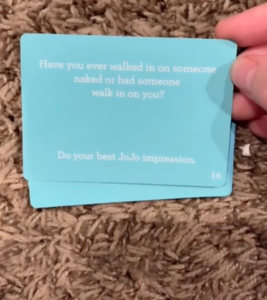 JoJo Siwa’s Board Game Is Being Pulled After Backlash For “Inappropriate Questions”
On Monday night, tween dancer and superstar JoJo Siwa shared a video on her TikTok account, where she has 31 million followers, regarding backlash over “inappropriate” questions in her “JoJo’s Juice” board game, which was manufactured by Spin Master—and is part of her Nickelodeon merch line. Prior to Siwa’s video, parents were complaining that her game, which is meant for children 6-year-old and up, parents complained that it included questions like “Have you ever walked in on someone naked or had someone walk in on you?” or “Have you ever gone outside without underwear (a bathing suit doesn’t count)?” Even though the game came out in 2018, it resurfaced when user Heather Watson, whose @watsonfam6 account has 17.8k followers, shared a video this week (that received 4 million views) calling out the game. Watson highlighted other questions featured in the game, which include “Have you ever stolen from a store?”; “Have you ever been arrested?”; “Who in this room would you most like to date?”; and “Have you ever taken money from someone’s purse or wallet without asking?” Some of the cards also allegedly asked players if they ever “kissed a boy” or “learned the art of twerking.” Prior to Watson’s videos, negative reviews from two years ago were spotted on Walmart and Amazon’s listings calling it “grossly underaged.” In Siwa’s response, she stated that since companies make the games and don’t run any of it by her first, she “had no idea of the types of questions that were on these playing cards” and claimed that she would have “never, ever approved or agreed to be associated with this game” had she known. Following the controversy, Nickelodeon and Spin Master both released a joint statement announcing that they would be pulling the game from retailers’ shelves. “We respect and value the relationship JoJo Siwa has with her fans and take concerns raised regarding the game ‘JoJo Juice’ very seriously,” the statement read. 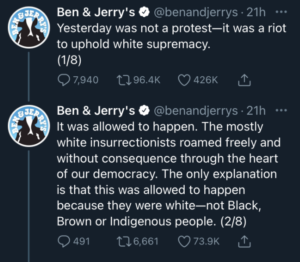 Brands & Young People Are Responding to the Riot at the Capitol

On Wednesday afternoon, an armed and angry mob of Trump supporters “stormed” the Capitol in Washington D.C. And in the digital era, many young users responded on social media in real time on platforms like Twitter and TikTok. While some videos on the app initially showed a few users who were actually at the riots, most of them came from users who were recording the news from their TV and adding live commentary or “making sense” of what was happening and criticizing the “lack of” police and security. And of course, to cope with the stress of the chaos, young people did what they do best: They turned the event  into memes—which is reminiscent of how they coped during the election just two months ago. In the days that followed, celebrities, influencers and brands were quick to react: Social networks like Facebook, Instagram, Twitter, Snapchat, and others banned Donald Trump’s accounts as a way to stop him from spreading “election misinformation” and further “incite violence.” TikTok said they would be removing videos of Trump’s speeches to supporters while redirecting hashtags like #stormthecapitol and #patriotparty. Meanwhile, Shopify permanently shut down Trump’s ecommerce stores, and Twitch banned a popular “PogChamp emote” after the face of the channel, Ryan “Gootecks” Gutierrez, encouraged further violence. Other brands like Coca-Cola, Chevron, and Seventh Generation silenced their marketing campaigns and social media, or speaking out. However, the “boldest stance” came from Ben & Jerry’s—who is no stranger to speaking out on political issues—“calling for the impeachment of President Trump” on Twitter and renouncing white supremacy. In a thread, the ice cream brand started out by writing “Yesterday was not a protest—it was a riot to uphold white supremacy” in a tweet, which got 401.1K likes and 75.7K retweets. The last tweet read: “Resign, impeach, 25th Amendment… not one more day.” Following the Black Lives Matter protests last year, brands can learn a lot about how to respond to sensitive and political topics. 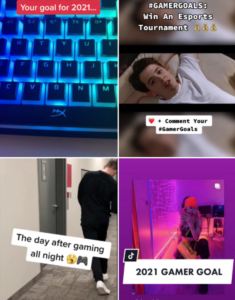 TikTok users are sharing their #GamerGoals for the new year—and the hashtag already has 74.7 million views.

Other users are showing off their #homemade food recipes—with 7 billion views and counting.

Everyone is obsessed with this TikToker turning internet drama into catchy bops.

Charli and Dixie D’Amelio received backlash for reportedly traveling to the Bahamas over the holidays.

A Dallas-based company run by three white women is getting backlash for launching a mahjong line without acknowledging the game’s Chinese origins.

An app that promoted parties during COVID has been banned by TikTok and the App store.

Fans don’t want to wait: Dawson’s Creek iconic theme song by Paula Cole is returning to the series on Netflix after several viewers requested it.