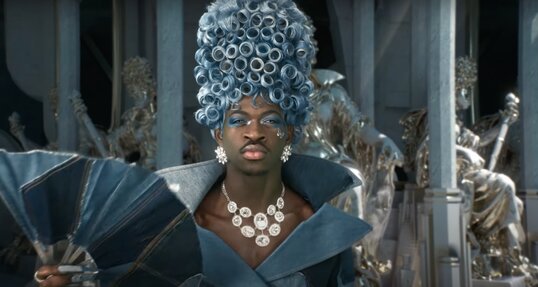 Lil Nas X takes a stripper pole to hell in his new music video, TikTokers can’t get enough of this nail artist’s Disney-themed manicures, a man on Twitter allegedly found shrimp tails in his box of Cinnamon Toast Crunch, and Krispy Kreme is getting out free donuts to vaxxed customers—plus more youth news you shouldn’t miss this week! 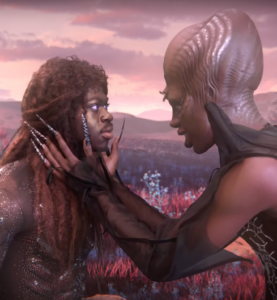 At midnight, Lil Nas X released the song and music video for his latest single “Montero (Call Me By Your Name).” In the video, which already has more than three million views on YouTube, the singer is seen in a trippy Adam and Eve retelling before shifting into a Bridgerton-esque scene full of colorful outfits, and ending with Lil Nas X sliding down a stripper pole where he gives Satan a lap dance. (You read that right.) Of course, it’s already getting the meme treatment by users on social media. After the song dropped, Lil Nas X, who has been publicly out since 2019,  penned an emotional letter to himself that he shared on Twitter, garnering 302.7K likes and 36.3K retweets, that read: “Dear 14 year old montero. i wrote a song with our name in it. it’s about a guy i met last summer. i know we promised to never come out publicly, i know we promised to never be ‘that’ type of gay person, i know we promised to die with the secret, but this will open doors for many other queer people to simply exist. You see this is very scary for me, people will be angry, they will say i’m pushing an agenda. but the truth is, i am. the agenda to make people stay the f*ck out of other people’s lives and stop dictating who they should be. sending you love from the future.” So far, young fans are praising the video for being “unbashedly queer.” Since Lil Nas X dropped the viral hit “Old Town Road” two years ago, he has exploded in popularity. Toward the end of last year, his futuristic music video “Holiday” also racked up millions of views, and he teamed up with emerging gaming and social platform Roblox for a concert that brought in millions of users. A recent Gallup poll found that young adults are far more likely to identify as LGBTQ than older generations, while YPulse’s Finding Love Post-COVID trend report found that 41% of 13-39-year-olds are passionate about the cause of LGBTQ discrimination—and having young stars like JoJo Siwa and Lil Nas X who are open about their sexualities helps many of them be more comfortable about coming out. 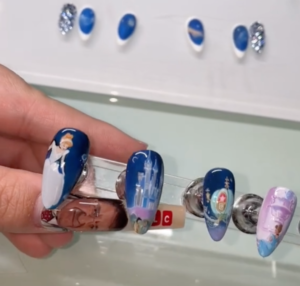 Disney-Themed Manicures & Makeup Are All Over Social Media Right Now

During the pandemic, YPulse research found that makeup has been shifting from an everyday habit into entertainment for young consumers, with 44% of young females reporting they were watching makeup/skincare videos to de-stress during this time—and the interest in makeup content isn’t slowing down. Last month, Vivian Xue Rahey (whose @vivxue account has 990K followers),  nail artist and CEO of Pamper Nail Gallery, shared a video on TikTok of herself making custom Cinderella press-on nails after a customer wrote a “thousand-word essay” with specific instructions and details her order. In her video, which received 7.6 million views, she shows each nail that she painted in painstaking detail. Since the video went viral, her other videos have racked up more views as well—and that isn’t the only Disney-themed nail set she’s made. She’s also made press-on nails inspired by The Little Mermaid, Sleeping Beauty, Peter Pan, The Aristocats, and a highly detailed set of glow-in-the-dark nails from Marvel’s Black Panther. (That video racked up 1.2 million views.) In recent months, Disney-themed beauty products have been seeing a surge in popularity. As a non-beauty brand, Disney has recently collaborated with a lot of cosmetics brands to reach their young fans: Their newest collaboration is with Essence Cosmetics for an eyeshadow palette inspired by their famous Disney princesses. They also previously worked with ColourPop for a “Disney Villains” collection as well as a Mulan collab and Frozen one. Meanwhile, Disney+ and Marvel Studios’ WandaVision teamed up with Ulta Beauty for a makeup set. 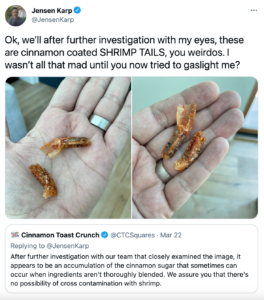 This Man Found Shrimp Tails in His Cereal Box

On Monday morning, LA-based comedian and writer Jensen Karp tweeted a photo (that received 148.7K likes and 14.9K retweets) that he found of what was allegedly shrimp tales in his cereal box of Cinnamon Toast Crunch with a caption that read: “Ummmm @CTCSquares – why are there shrimp tails in my cereal? (This is not a bit).” The brand initially replied to the post saying that they would get “to the bottom of it” and again in a separate post that promised: “there’s no possibility of cross contamination with shrimp.” The exchange continued, with Karp maintaining that the objects were, in fact, shrimp, even taking the tails into a lab for testing. Karp also went on to document what else he allegedly found in the box including string, a re-taped bag, and little black marks on the cereal itself, which some users speculated was rat poop. He also shared the DMs between him and the General Mills-owned brand. Of course, all of Twitter caught wind of #ShrimpGate—and many, many memes were born. Some internet users started sharing recipes and videos of themselves actually creating dishes like Cinnamon Toast Crunch crusted shrimp. However, another aspect seemed to capture the internet’s attention even more: Karp is married to actress Danielle Fishel, who played Topanga in ‘90s hit show Boy Meets World. However, the situation escalated even further with past ex-girlfriends accusing him of past abusive behavior prompting many to call the whole scenario a classic “milkshake duck” situation. 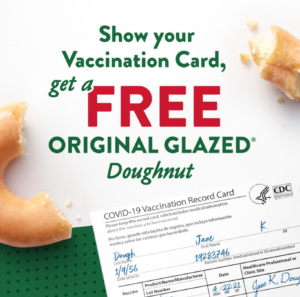 As the vaccine is being rolled out to more of the general public, Krispy Kreme announced on posts via Twitter and Instagram (which garnered thousands of likes) that the brand will be giving away free donuts to customers in the U.S. who show their COVID-19 vaccination record card. While the campaign was initially met with some criticism from a small group claiming it is an unhealthy promotion, that criticism was met with counter-backlash from others who called those comments of fat shaming—and said that after a year of turmoil, the country deserves a nice treat. Since the vaccine began to be administered, young consumers have been celebrating the moment with everything from planning their vaccine outfits and ironically wearing “vaccine shirts” to appointments. As lockdowns come closer to the end, brands have been excited to celebrate a post-pandemic world with young consumers—but are being extra careful in their messaging in marketing. But the Krispy Kreme promotion shows that people do indeed want a nice treat after being cooped up inside from over a year. 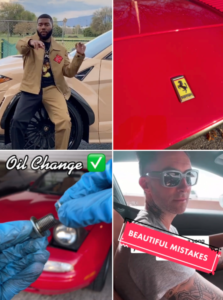 TikTokers are showing off their cars with #CarTikTok—and it has 2.6 billion views.

Chrissy Teigen has quit Twitter after “years of harassment.”

The actress who played young Jennifer Garner in 2004 hit movie 13 Going On 30 is almost 30-years-old now—and she shared a video on TikTok to make Millennials  “feel old.”

Kylie Jenner initially faced backlash for sharing a GoFundMe for her stylist’s surgery.