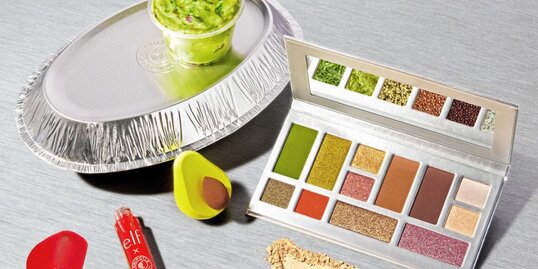 Beauty palettes are turning into a major marketing trend, as some surprising brands partner with makeup collections and get glam…

During the pandemic, young people’s relationship with makeup may have changed, but many are still turning to it as a way to treat themselves and have mini-moments of luxury during difficult times YPulse’s beauty and personal care report found that 51% of 13-39-year-old females have purchased beauty or skincare products as retail therapy during COVID, while 67% of females say putting makeup on during this time makes them feel better. And of course, they’re using makeup to liven up their appearance before their Zoom meetings: More than half (54%) of 13-39-year-old females reported putting on makeup before video chatting. Meanwhile, 44% of young females are watching makeup and skincare videos to de-stress during this time.

But it’s not just beauty brands that are reaching young consumers through makeup. Previously, we told you about the somewhat unexpected brands going into the beauty game by launching their own—including Birkenstock and Lululemon. But non-beauty brands are also teaming up with makeup mainstays to tap into the audience and give themselves a limited-edition glam makeover. Recently, food chains, TV shows and more have been getting their own makeup palettes and collections and turning beauty partnerships into an undeniable marketing trend. Here are five brands who have created makeup collections you wouldn’t expect: 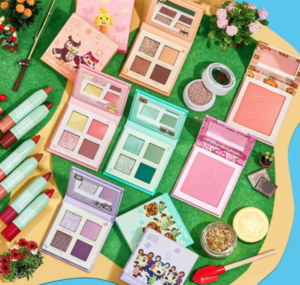 Nintendo’s Animal Crossing: New Horizons was one of last year’s hottest video games, and its massive popularity caused fans to scrape up all the merch that was put out. Earlier this year, the game decided to tap into the beauty industry by teaming up with Colourpop makeup collection that included four palettes specific to characters in the game. For instance, selected colorways of their pans include a pastel pink with a spot of yellow to represent Isabelle, mints and greens inspired by Tom Nook and his family, neutral shimmery shades to match Blathers, and a purple palette for the very stylish Able sisters. The collection also features three lip tint duos, two blushes, and a Gliterally Obessed gel with a golden sparkly hue inspired from the game’s bells, and a Super Shock Shadow in an exclusive Animal Crossing-themed container. If there’s one beauty brand that’s worked tirelessly to launch collaborations in the last year, it’s ColourPop. They also launched Sailor Moon, Hocus Pocus, and Baby Yoda makeup collections in the last few months. 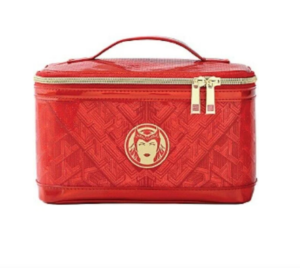 Disney+ and Marvel Studios’ WandaVision is one this year’s most popular shows so far: TikTokers can’t stop talking about it, and Forbes reported that it was the most streamed series in the entire world. Earlier during the show’s airtime, users on TikTok used the hashtag #WandaVisionMakeup challenge (which has 1.4 million views) go viral, where they showcased “half-grayscale, half-color creations” to pay homage to Wanda Maxioff’s fabricated reality through the decades. Now, the show is dabbling in the beauty industry to reach young makeup enthusiasts. At the beginning of this month, Ulta Beauty launched an exclusive WandaVision makeup collection with “scarlet retro packaging” with “warm reddish tones” that feature a five-piece brush set, a blush palette, a brow kit, three eyeshadow palettes, a winged liner kit, a plumping lip gloss, jelly gloss, and lip balm. WandaVision isn’t the only popular witchy show from a streaming service that tapped into the makeup industry. Netflix collaborated with NYX Cosmetics at the beginning of last year to launch a limited-edition makeup kit to promote The Chilling Adventures of Sabrina—and it sold out quickly. 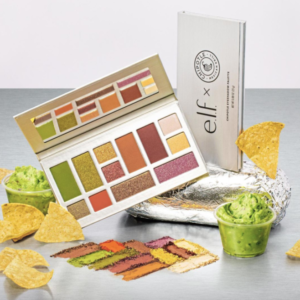 We already told you that Chipotle has been launching mech to reach their fans, but now they’re dropping a more unexpected item: a makeup collection. Recently, they collaborated with E.l.f Cosmetics for a limited-time menu item as well as an eyeshadow palette “inspired by the fast-casual chain’s burrito ingredients” like white rice, black beans, sofritas, mild salsa, and many others. Additionally, both brands worked with the NTWRK app to release their first shoppable video for the palette. This isn’t the first time E.l.f and Chipotle have worked together: Last spring, they debuted a 10-piece makeup collection that came with a makeup bag that resembled their “famous foil-wrapped burritos.” 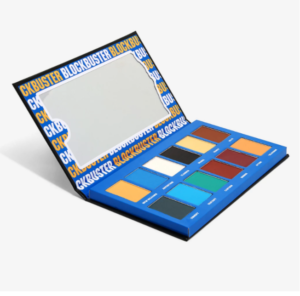 Gen Z and Millennials can’t get enough of the ‘90s and the early 2000s—and neither can brands. And in this case, they’re back in the form of Blockbuster Video eyeshadow. Last month, fashion brand Hot Topic released a 12-color palette in a package that’s identical to the video rental chain’s iconic video cases featuring its classic blue and yellow logo. The shadows inside are all matte and come in a variety of shades inspired by popular movie genres, from the bright yellow “New Releases” to the deep read “Horror” to the light blue “Fantasy,” and the darker blue “Adventure.” Despite the video chain being basically defunct, Blockbuster has found some creative ways to continue reaching young consumers in recent years to keep the nostalgia alive: Last year, they partnered with Airbnb to throw a ‘90s-themed sleepover for guests in their last-standing retail location in Oregon, and the year before, they teamed up with streetwear brand Dumbgood for a “Millennial-focused pop-up shop” full of VHS tapes and popcorn smells, and focused on their “Be Kind, Rewind!” mantra. 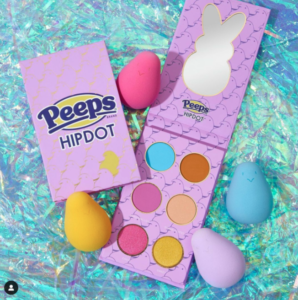 Young consumers love celebrating holidays, and ahead of Easter next month, Hipdot is partnering with candy brand Peeps for a limited edition makeup drop that consists of a six-pan pressed pigment eyeshadow palette along with a four-piece set of fluffy makeup sponges that “are shaped like [their] favorite marshmallow chicks. The palette features a mix of neutral and bright, pastel shades in a variety of matte and shimmer finishes. During lockdowns, candy and sweet snack sales have soared, and YPulse’s Comfort in the Kitchen trend report found that the number of young consumers buying chips, candy and sweets, cookies, and ice cream increased during the pandemic—so if their love for makeup matches their sweet tooth, chances are that a candy-inspired makeup collection is bound to be a hit with them.