Bloomberg’s Meta Memes Take Over On The Viral List 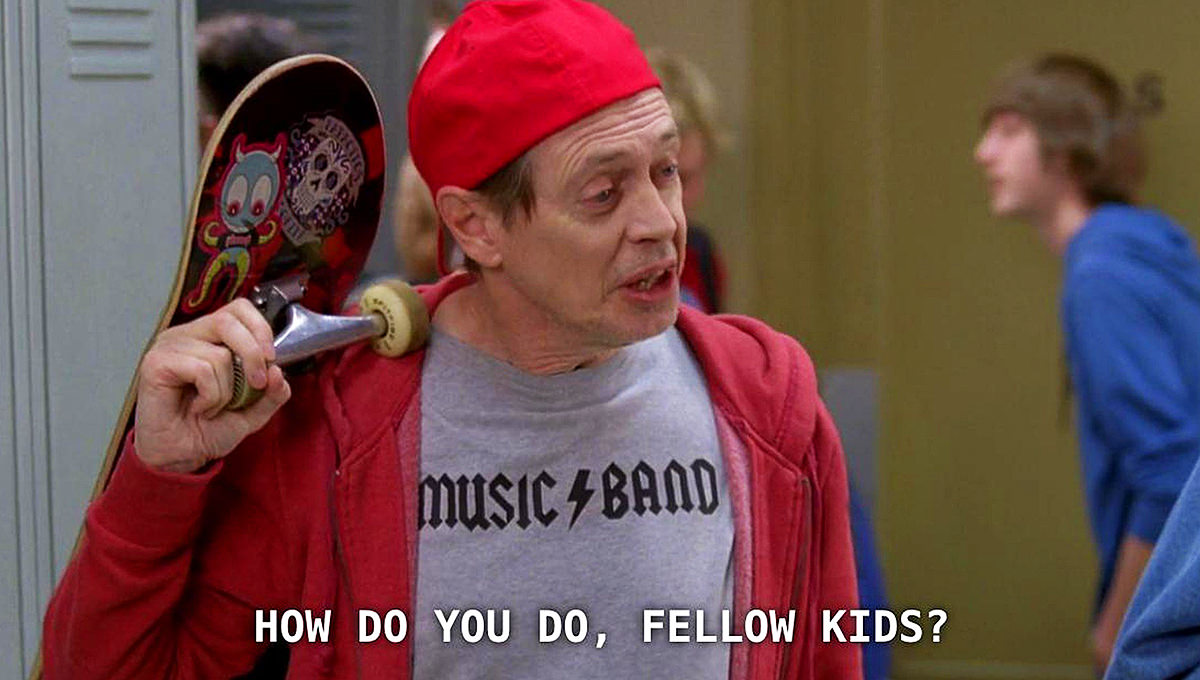 Mike Bloomberg is using memes in his campaign to become the next president, KFC and Crocs are releasing chicken-themed clogs, people are obsessed with the To All The Boys sequel, and the Renegade dance is taking TikTok by storm… 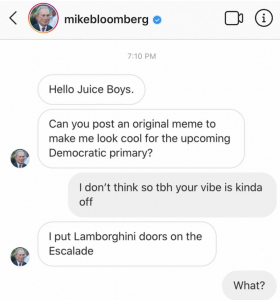 Mike Bloomberg’s Meta Memes Are Everywhere & The Internet is Divided

Sponsored ads in the form of fake DMs between Democratic presidential candidate Mike Bloomberg and meme influencers have flooded Instagram. The ads, appearing on accounts like @grapejuiceboys (2.7 million followers) and @tank.sinatra (2.3 million followers) all follow the same formula: a screenshot of Mike Bloomberg texting meme accounts to ask if they can “make him look cool” ahead of the election with a meme. So, a meme about using memes—very meta. The self-aware campaign is the brainchild of Meme 2020, a new company led by Mike Purzycki, the former CEO of Jerry Media who was also attached to the Fyre Festival controversy. Of course, the campaign has created division: Some influencers have praised the campaign, while others are a bit skeptical, calling out Bloomberg’s wealth for buying this kind of promotion. But some young people aren’t totally convinced that the campaign makes him “relatable” or “hip.” Instagram announced that it was updating its policies to allow political candidates to post sponsored content as long as it is clearly labeled that it is branded content. Some are predicting that memes are the future of political campaigns, and with the Iowa Caucus and the New Hampshire primary just finishing up, presidential hopefuls are increasingly looking for ways to reach young voters ahead of the 2020 election. 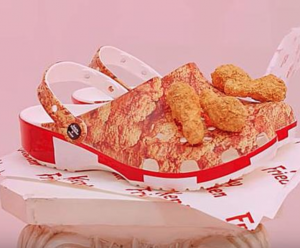 At New York Fashion Week, the fast food chain and shoe brand unveiled two pieces of new footwear: “avant-garde” high platform heeled bucket clogs based on KFC’s meal buckets, and a more standard classic Croc that features a fried chicken print, two scented drumstick attachments, and KFC’s colors. The wild creations were even featured on Paper Magazine’s digital cover. Both companies made their official online announcements across all their social channels (KFC’s Instagram post garnered over 45K views)—and it seems like the internet doesn’t know quite how to feel. Most reactions have ranged from amazed to perplexed, and some publications are calling the brand partnership one made in ‘Murica haven. But young consumers are drawn to weird marketing and ugly fashion, so the move was clearly a smart one. 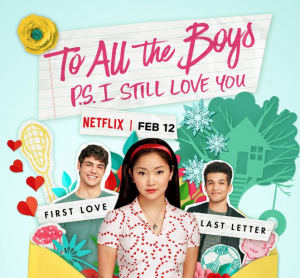 On Wednesday, Netflix released the much anticipated To All the Boys I’ve Loved Before sequel, P.S. I Still Love You, just  in time for Valentine’s Day. We credited Netflix with bringing back teen movies and the first film, based on the popular books, is one of the best examples, earning the fandom of many teens. Netflix banked on the sequel’s imminent popularity and continued to cultivate its creative brand partnerships by collaborating with Subway, Urban Outfitters, and for its biggest one yet—Sephora—-to unveil collaborations with multiple brands centered around the film. To get more young subscribers on board with their streaming service, Netflix is temporarily offering to stream the first film to non-subscribers for free—guaranteeing that the film will get even more viewership. 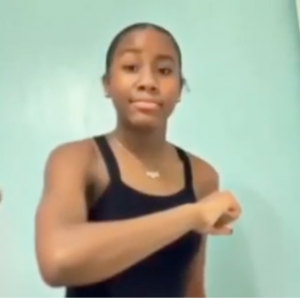 The Renegade is the Viral Dance Taking TikTok by Storm

If you haven’t seen The Renegade dance, you probably haven’t been on TikTok. The dance is being done by everyone: teens at high school pep rallies, Lizzo, Kourtney Kardashian, David Dobrick, and even TikTok’s biggest star Charli D’Amelio—who has been deemed the “CEO for popularizing it.” But nobody really knows that Jalaiah Harmon, a 14-year-old from Georgia, is the one who created it. In September, Jalaiah and a friend posted a video on Funimate (and Instagram) and garnered over 100,000 views. It wasn’t long before a user posted the dance on TikTok, and Charli D’Amelio did too, leading to many others posting their own versions of the dance. None giving credit to Jalaiah. It’s led many to ask the question “On TikTok, who owns a viral dance?”—which Vox explored, wading into the ethics of copyright and how it is hard to legally claim dances on the web. The New York Times reported that Jalaiah doesn’t harbor any hard feelings against Charli, and since discovering who the original creator of The Renegade is, Charli hopes to collaborate. 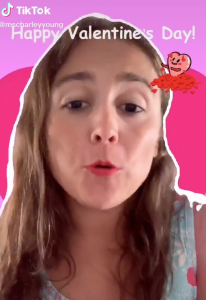 The Rock’s daughter is following the footsteps of her dad, grandpa, and great-grandpa, training to be the first fourth generation WWE wrestler.

Dwayne Wade and Gabrielle Union support their daughter’s decision to identify as transgender.

Billie Eilish released the theme song for No Time To Die, and it’s already getting praise.

Netflix dropped a Stranger Things teaser for the new season—and there was a surprise.