The New Hampshire primary is today, the Iowa Caucus took place last week—what candidate are young voters supporting in these crucial moments? The 2020 Election is now just nine months away, and we’ve got the real data on who young voters want to win…

In our Special Election 2020 Report last November, we told you the majority of young Americans are worried about the future of the country and feel politicians are not focusing on the issues that they care about. We also told you who young consumers said they would vote for at the time. Since then, a lot has changed: candidates have dropped out, the impeachment hearings have unfolded, and heated debates have taken place. Followed by debates over who won those debates.

As we mentioned in that Special Election 2020 Report, the environment, specifically climate change, is an issue that Gen Z & Millennials agree is the biggest problem their generations are facing, and it’s the issue they were most likely to name as a vote decider. The economy was the second most-mentioned issue that will decide their votes, and is a top topic that young Americans tell us they want to hear presidential candidates discuss. The post-recession generations have fears and concerns for their future, with lack of jobs one of the biggest problems they believe they’re facing, even in a time that the economy is believed to be on an upswing.

While the majority of young Americans feel lucky to live in the U.S. and many see the nation as powerful, diverse, and a place of opportunity, they’re also feeling it’s divided, and are worried about the future of the country. With all of these anxieties brewing, young voters’ plans for the upcoming elections are critical. There’s significant confusion over what Democratic candidates are actually leading the race, and crucial election events are taking place. So who do they support right now? We’ve been continuously asking 18-39-year-olds, “If the next Presidential election were held today, who would you vote for?” Here are the most recent results: 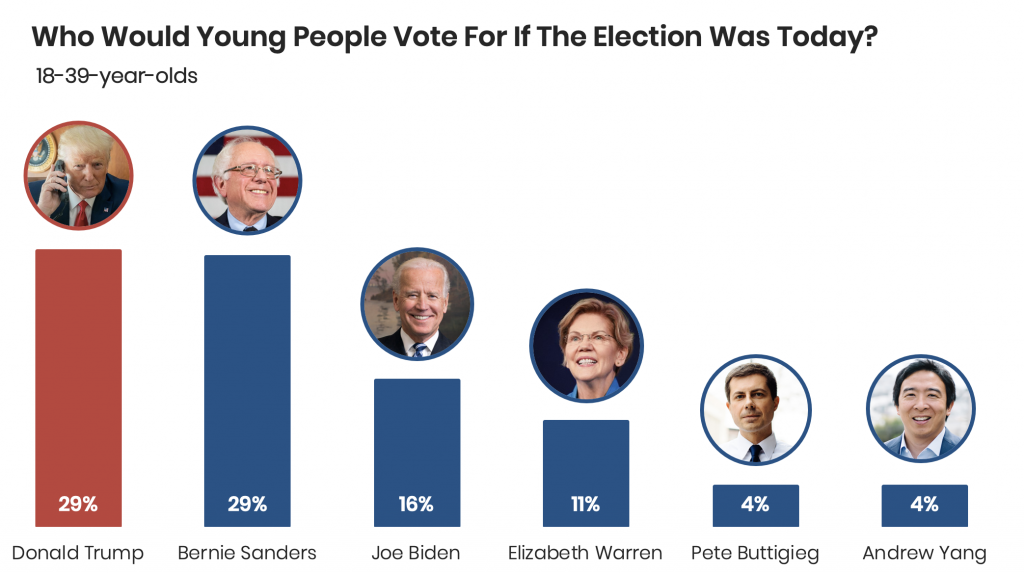 Among all young voting-age consumers, Donald Trump and Bernie Sanders are tied for first place, with 29% of 18-39-year-olds telling us that they would vote for Trump, and 29% saying they would vote for Sanders. Among the young voters who tell us they would vote for Bernie Sanders, many cited his promise to eliminate student debt as a reason. Student debt is a top concern for Millennials—and a growing one for Gen Z—and education is one of the top issues they say they would like to hear Presidential candidates discuss. If we look at the candidates by party, a whopping 70% of young voters would vote Democrat if they were voting today. It’s a finding that aligns with their stated political affiliation: 39% of 18-39-year-olds tell YPulse they most affiliate with the Democratic party, 21% with the Republican, 18% say they are Independent, and 21% are not affiliated with any party.

We’ve been tracking young voters’ candidate support since last year, and Sanders’ base has had the most significant jump, from around 15% in early December 2019, to his current 30%: 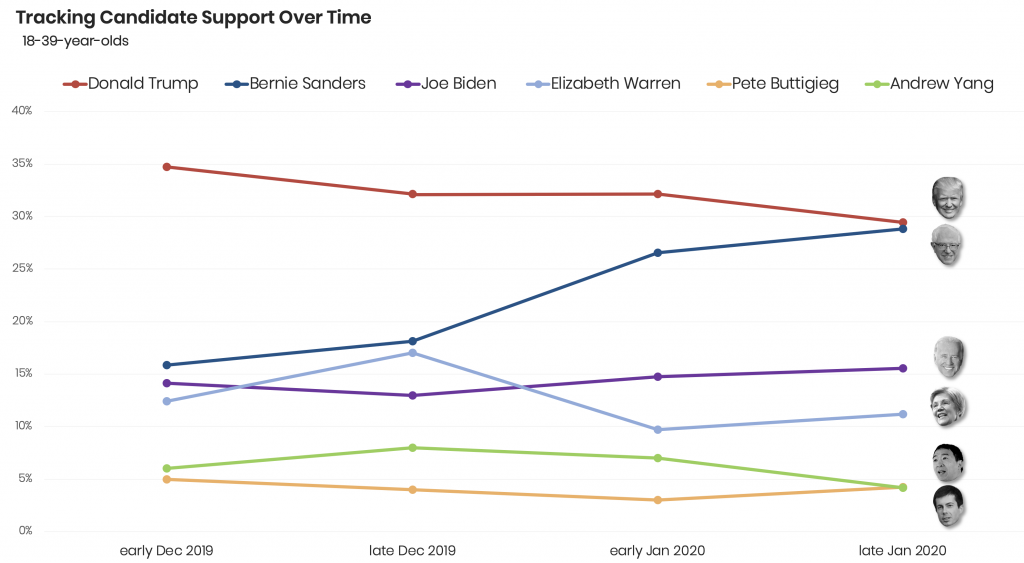 While Democratic candidates were in a closer race at the end of 2019, it’s clear that Sanders has become the frontrunner overall. Support for Warren has been more rocky, and Biden, Buttigieg, and Yang haven’t seen any significant gains. Trump support has actually dropped slightly over the last few months.

But there is a marked difference between the candidates that young male and female voters tell us they support right now. While 34% of Millennial men would vote for Trump, only 24% of Millennial women would: 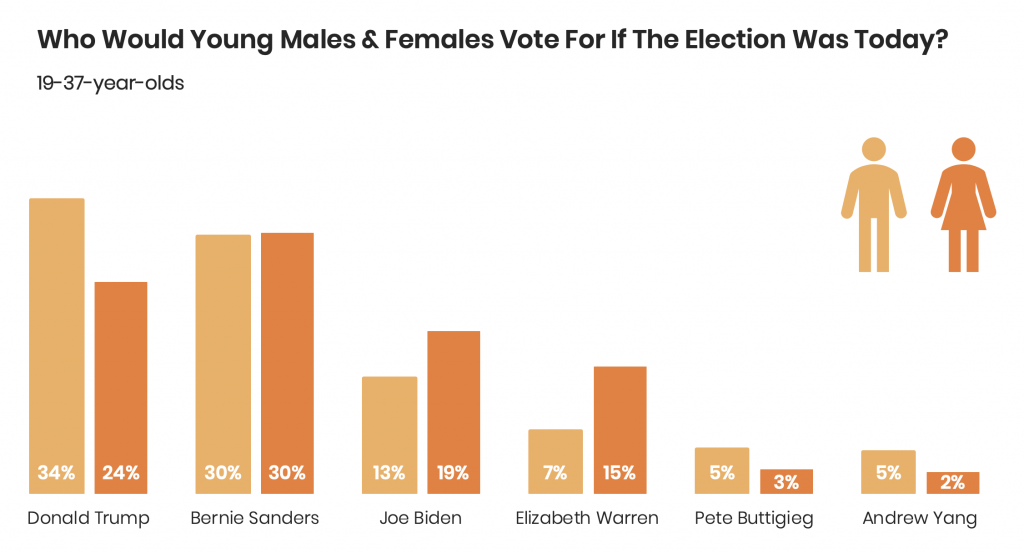 But this is among all young voters across parties, and currently Democrats are campaigning heavily to those who will be making their decisions in the primary race. So who is the candidate that young Democratic voters tell us they would vote for if the election was today? 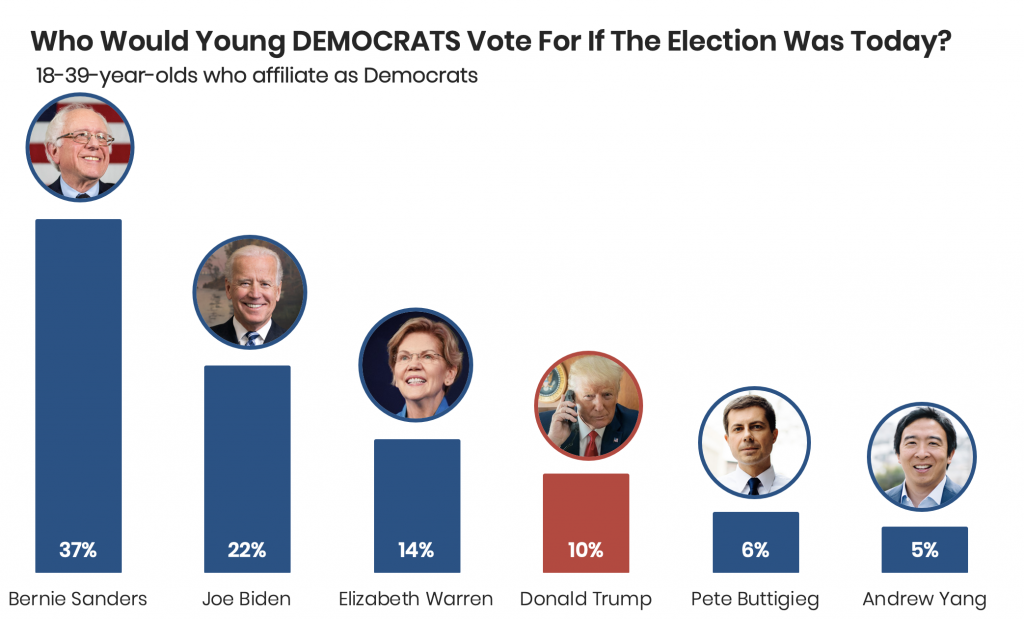 Sanders’s lead among young voters increases to 37% when looking specifically at those who affiliate as Democratic (a.k.a. those who will most likely be making primary voting decisions). But the overall ranking of Democratic candidates remains the same, with Biden in second place, and Warren third among this group.

Sanders has been vocal about fundamental and sweeping changes to structures and policies that would directly impact these young generations, and though he is clearly not as close in age to Gen Z and Millennials as some of the other candidates, he has clearly struck a chord with the generations that are feeling anxious and dissatisfied with the current state of the country.

Although Joe Biden has been less than sympathetic to the plights of Millennials (explaining that he has no empathy for the younger generations who come to him about how tough things are), he’s still a favorite amongst young voters, pulling ahead of Elizabeth Warren. In our most recent survey, young voters who support Biden cited his experience and the fact that he worked alongside Obama as reasons to elect him.

Andrew Yang and Pete Buttigieg are at the back of the pack, staying right around 5% so far in 2020 with young voters. Although excitement for Yang was originally high, with large groups of Millennials excitedly proclaiming their loyalty to the “Yang Gang” and his Universal Income promise, Yang’s rallies have been smaller and smaller, with less than 80 people at his recent town halls.

The next nine months will be passing quickly, and young voters’ support will likely shift further as more candidates to drop out. Check out November’s Special Election 2020 Report on Gen Z and Millennials’ voting plans for more insight into their views, the issues that are important to them, and what’s influencing their voting decisions.

If the next Presidential election were held today, who would you vote for?

How much do you agree or disagree with the following statements about the Coronavirus?