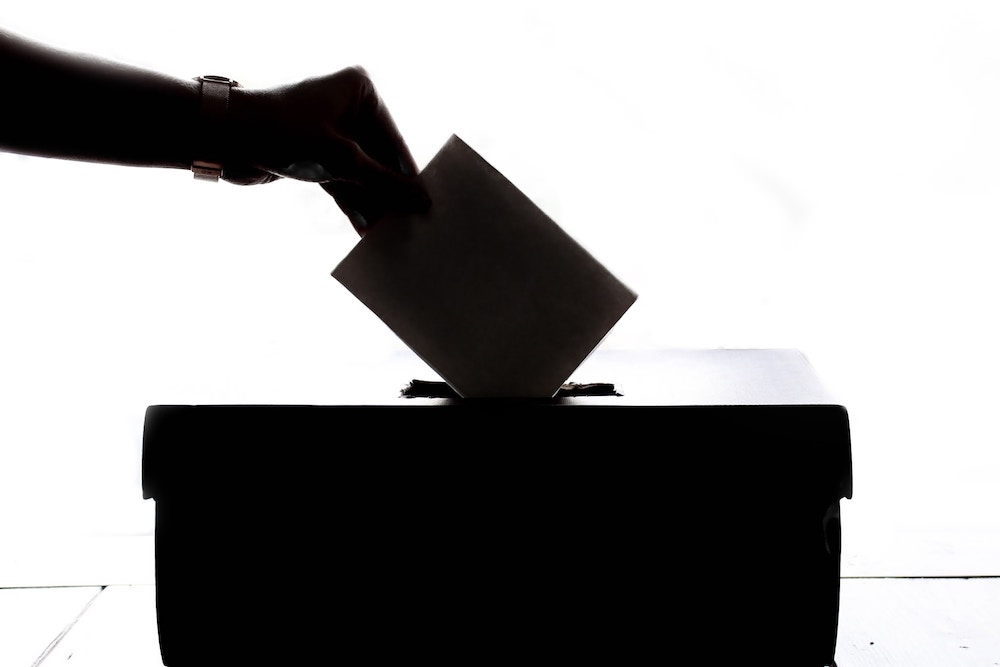 Who would Gen Z & Millennials vote for if the election was tomorrow? As the debates rage, we asked young voters all about their political engagement, and voting plans…

YPulse’s recent trend research found that Gen Z and Millennials see the country as divided, and imperfect; and they’re becoming more critical of how it operates. As the election approaches, understanding the perspective of these young voters is essential to anyone who wants to capture their support—and they’re not feeling heard. Seven in ten 13-37-year-olds say that politicians don’t focus on the issues they care about.

This is a dissatisfied group of potential voters, looking for change: 81% of 13-36-year-olds are worried about the future of America, and 63% say America is changing for the worse. With all of these anxieties brewing, their plans for the upcoming elections are critical—and YPulse’s upcoming Election Special Report delves into their voting engagement, plans, and perspectives. In addition to finding out how they’re following election news, how many are registered to vote, how many plan to vote, and much more about what’s driving their votes, we wanted to know what candidates are actually pulling ahead in the race for young consumers’ support. So we asked Gen Z and Millennials, “If the next Presidential election were held today, who would you vote for?” We examined the resulting data to find out who is in the lead with young voters among the Democratic hopefuls. We’ll start with who 18-37-year-olds overall would support, among all of the current players: 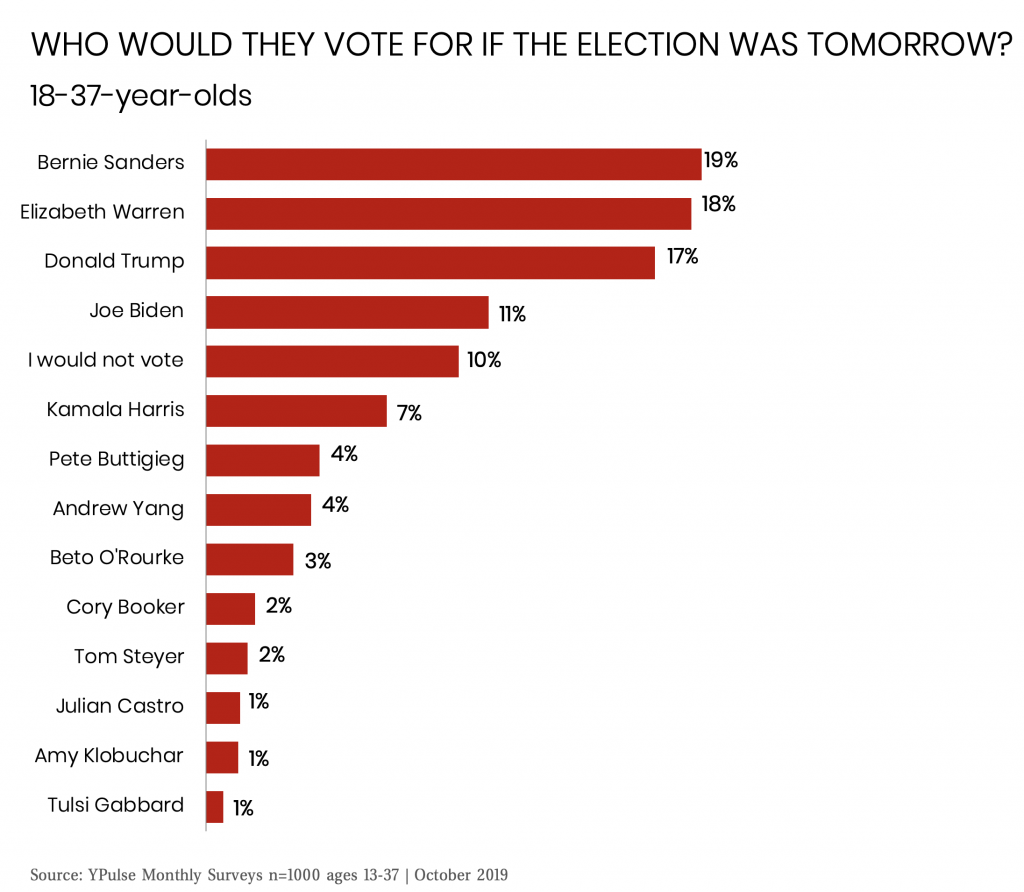 Half of 18-37-year-olds say they most affiliate with the Democratic party, and 32% say they affiliate most as Independent or do not affiliate with any party—versus 18% who say they affiliate most with the Republican party. We see those allegiances reflected here, with 17% of young voting-age consumers saying they would vote for Donald Trump if the election was tomorrow, and 73% saying they would vote for a Democratic hopeful, and 10% saying they would not vote at all. But who’s in the lead? Bernie Sanders and Elizabeth Warren are basically tied as the top contenders for Gen Z and Millennials’ votes, with 19% and 18% respectively. Sanders and Warren have both been vocal about fundamental and sweeping changes to structures and policies that would directly impact these young generations, and though they are not as close in age to Gen Z and Millennials as some of the other candidates, they have clearly struck a chord with the generations that are feeling anxious and dissatisfied with the current state of the country. But which of the two has a chance of winning these young voters if they make it to the primary? 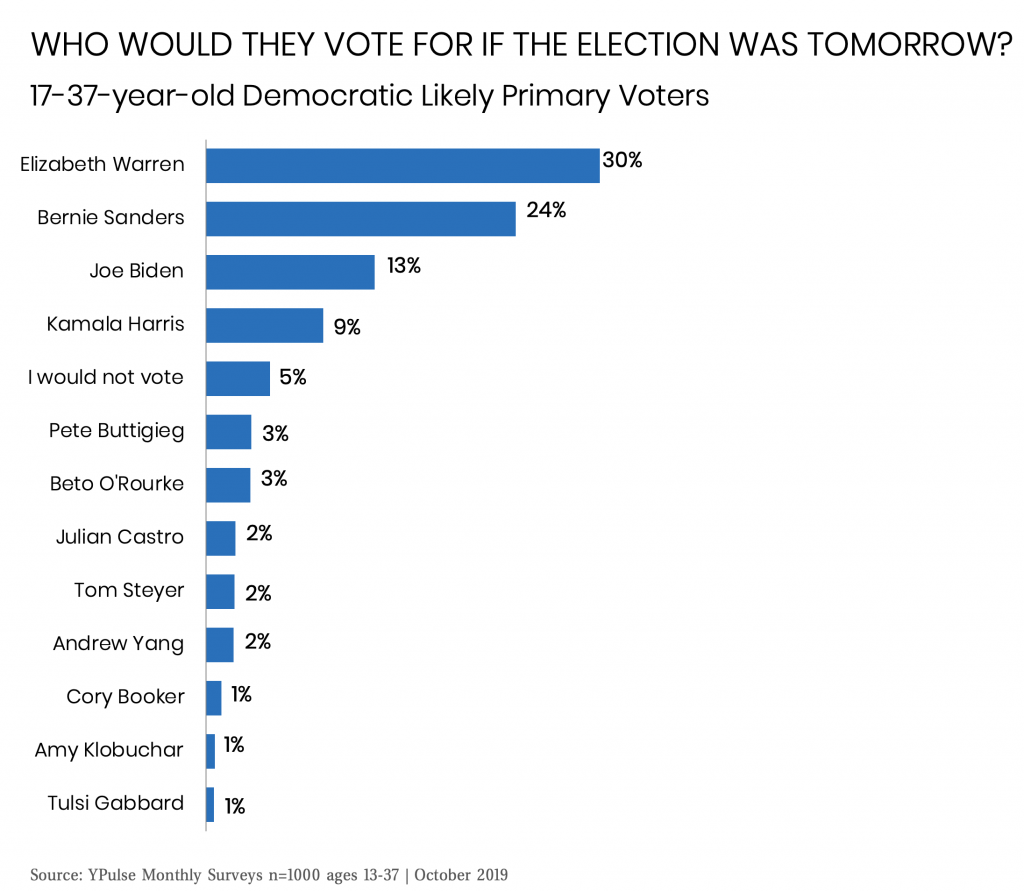 Among young Democratic-affiliated likely primary voters, Elizabeth Warren is in the lead. We can take some guesses at why she’s earning their support: Warren has earned a reputation for having a plan for everything, a potential comfort to generations who are most likely to feel the country needs significant change. One of those plans is especially catering to Millennial and Gen Z’s top concerns: Warren’s proposed Student Debt Relief Act, which would cancel $640 billion in student loan debt. Student debt is a top concern for Millennials and a growing one for Gen Z, and education is one of the top issues they say they would like to hear Presidential candidates discuss.

Of course, as the campaigns continue, many things could change—and currently, only half of likely primary voters say they know who they will be voting for. YPulse will continue to track who young consumers support in the races throughout the election process. Stay tuned for our Election Special Report, coming this November, for even more insights into the political preferences, plans, and behaviors of Gen Z and Millennials.

Click here if you want to learn more about how to access this exclusive report when it’s released!