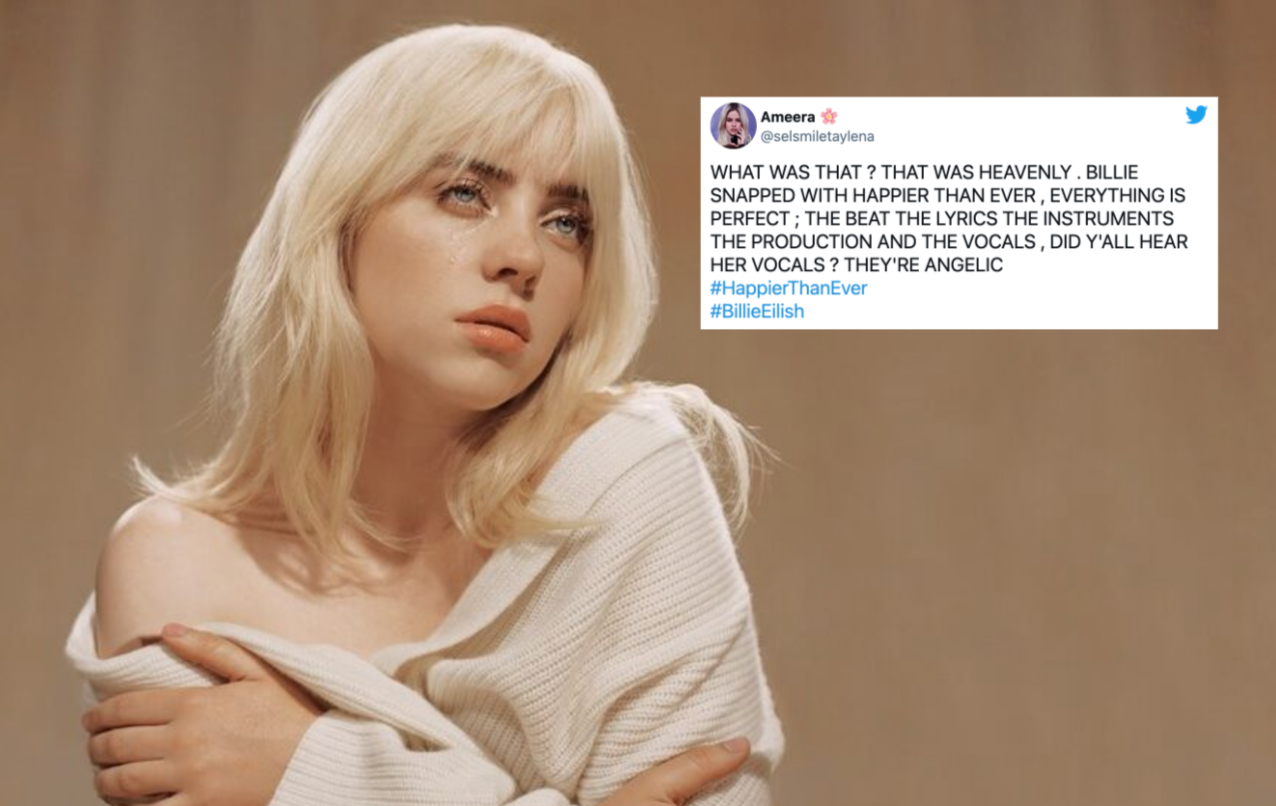 Fans can’t get enough of Billie Eilish’s new album, Megan Thee Stallion x Revlon’s makeup collab sold out within hours on StockX, Kanye West performed to a packed arena in Atlanta to promote his upcoming album, and fans and brands are supporting Simone Biles after she withdrew from an event at the Tokyo Olympics—plus more news that took over social media this week! 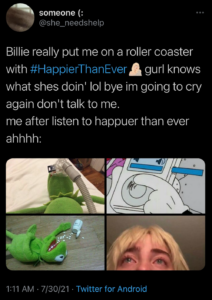 One of Gen Z’s favorite singer-songwriters Billie Eilish released her second studio album Happier Than Ever today, so of course, it’s already taking over her young fans’ lives. Within a few hours, it reached number one on the Apple Music charts—and the music video for the song “Happier Than Ever” garnered over 900K views and counting on YouTube. TikTokers have been using the hashtag #happierthanever, which has 263.9M views, to share videos of their reactions and their love for the artist and her new album. The official @happierthanever account on TikTok also accrued 1.3 million followers. There was already a lot of anticipation ahead of the album’s release: According to Apple Music, it was the “most pre-added” album on the platform. And in the months leading up to it, Eilish dropped five music videos for her songs “my future,” “Therefore I Am,” “Power,” “Lost Cause,” and “NDA”—all of which received millions of views. It’s also the first album featuring the musician’s new all-blonde look, which she debuted on the cover of Vogue UK back in May. Some fans actually used the #happierthanever and #billieeilish hashtags on TikTok to say goodbye to “the end of an era”—referring to her iconic former black hair and slime green roots. But that’s not all she has in store for Happier Than Ever: The 19-year-old has an upcoming world tour in 2022, and she announced that her next concert special will stream on Disney+. With Eilish’s massive base of devoted fans and her ability to go viral for, well, pretty much everything she puts out, the star continues to prove herself to be a Gen Z powerhouse. 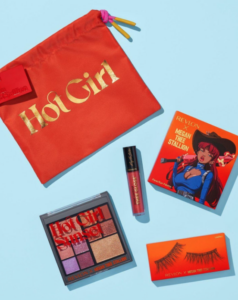 From “Savage” to “WAP” to “Thot Shit,” Megan Thee Stallion is known for putting out the tracks that make waves on TikTok, and notably, for penning the saying “Hot Girl Summer.” Now, the rapper and her popular catchphrase are making moves in the world of makeup: On Wednesday, she collaborated with Revlon for a limited-edition Hot Girl Sunset Collection that was released on StockX, which marks the first time a makeup brand launched a collection on the online marketplace and resale site—and it sold out within just a few hours of dropping. (Similar to eBay, interested customers on StockX can either immediately buy an item for its current lowest price or submit a bid and wait for one of the sellers with the same item to accept the offer). The collection featured four items that were sold together as a set for $40, and only 450 sets were made available. The four products included a 10-pan eye and face palette, wispy false eyelashes, sparkly lip gloss, and a makeup bag that reads “Hot Girl” to carry it all. YPulse’s most recent celebrities and influencers report found that 30% of 13-39-year-olds are interested in merch collabs between celebrities and brands, and with non-beauty brand makeup collabs and celebrity collabs proving to be a definite hit, there was no doubt that a drop like this, that merged the two concepts, was going to do well. 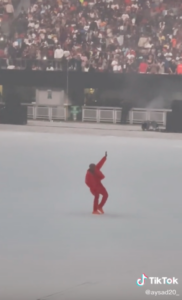 Elsewhere in the world of music, Kanye West held a listening party for his upcoming album Donda last Friday at the Mercedes Benz Arena in Atlanta, where he played some tracks from his highly anticipated project. The album, which was supposed to come out last year, and got delayed for over a year, is finally set to come out next week. And the rapper, who has reportedly been living in the stadium while he finishes up the album, performed in front of a large crowd that included his kids, ex-wife Kim Kardashian, and her sister, Khloé Kardashian, who shared photos from the event, receiving over two million likes. One fan on TikTok went viral after sharing a video of himself sneaking into the arena, while insiders shared photos of the event’s pricey menu, which went viral all on its own, for its $40 hotdogs. Fans who didn’t get a chance to attend the event IRL got to experience it at home via an Apple Music livestream and according to sources with “direct knowledge,” the event reportedly broke the Apple Music Global Livestream record, with 3.3 million views tuning in. TikTokers used the hashtag #donda, which has 255 million views, to share clips and reactions to the event and tracks, one of which was recently used in a Beats Studio Buds commercial starring runner Sha’Carri Richardson. West has been known to generate hype everywhere he goes, from his Sunday Services to the sold out jacket from the Yeezy Gap collab, and this is just another example of how he’s doing so. 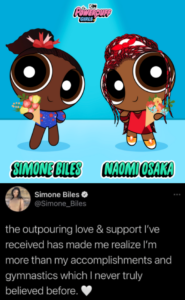 The Tokyo Olympics have been taking over social media this week, and one of the biggest pieces of news to come out of it is when Simone Biles announced that she was withdrawing from Thursday’s final individual all-around competition “to focus on her mental health” after experiencing “the twisties” (a.k.a when gymnasts lose awareness of where they are in mid-air making it difficult to land safely) during one of her vaults, which left her shaken up. The 24-year-old gymnast is one of Gen Z and Millennials’ top favorite pro athletes, and following the decision, fans, celebrities, and athletes like Michael Phelps and Sha’Carri Richardson immediately showed their support for her. Biles’ brand sponsors Athleta and Visa also lauded her decision to put her mental health first. In a statement from Athleta, they said: “We stand by Simone and support her well-being both in and out of competition. Being the best also means knowing how to take care of yourself. We are inspired by her leadership today and are behind her every step of the way.” Visa put out a similar statement that praised her for being an “inspiration to us all.” Cartoon Network shared a cartoonized version of Biles and Naomi Osaka in the form of Powerpuff Girls to show their support for the two athletes and praise them for “speaking up [and] protecting their mental [and] physical health.” While it hasn’t been determined whether Biles will perform in her remaining events at the Olympics, she tweeted that the outpouring love and support she received made her realize that she’s “more than [her] accomplishments and gymnastics which [she] never truly believed before,” in a post that received over a million likes and 77K retweets. We previously told you how support was shown for Osaka after dropping out of the French Open to prioritize her mental health, as well as Sha’Carri Richardson after revealing that she used marijuana to cope with grief. In the last few months, young Black athletes have been leading “a mental health revolution.” Experts say that while such mental health struggles aren’t uncommon among Black athletes, the willingness to be so open about it and publicly advocate for better care is “fairly new” in the world of professional sports. YPulse’s State of Mind trend research found that 78% of 13-39-year-olds would appreciate mental health support from brands, while 83% say they want to live in a world where people openly talk about their mental health—and the continued support of athletes like Osaka, Richardson, and Biles shows young consumers how serious companies are about prioritizing their mental health. 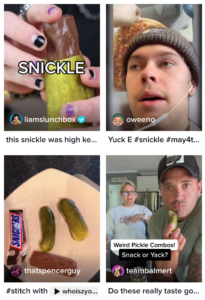 Doritos offered $20K to a teen who found a rare “puffy” chip and listed it on eBay.

Sunisa Lee won a gold medal for the U.S. in the women’s gymnastics all-around competition and received support from teammate Simone Biles as well as her family. And the mayor of St. Paul, Minnesota declared July 20th as Sunisa Lee Day.

13-year-old Rayssa Leal, who once caught the attention of skating legend Tony Hawk, won a silver medal at the Olympics.

And fans are obsessed with Nike’s skateboarding uniforms that were featured at the Olympics.

Pink offered to pay for the fines of Norway’s women’s handball team after they were fined for wearing shorts instead of bikini bottoms at the championships in a rule that she called out for being “very sexist.”

Beloved PBS Kids show Arthur, which is the longest-running kids animated series in history, is finally coming to an end after its 25th and final season.

A video featuring Emma Roberts is being turned into “hilarious, but kinda dark” memes.

M. Night Shyamalan’s latest movie Old is getting the meme-treatment on Twitter as people poke fun at its premise (which is about tourists who visit a beach and instantly become, well, old).