Everyone’s After Marvel’s Loki Charms on The Viral List 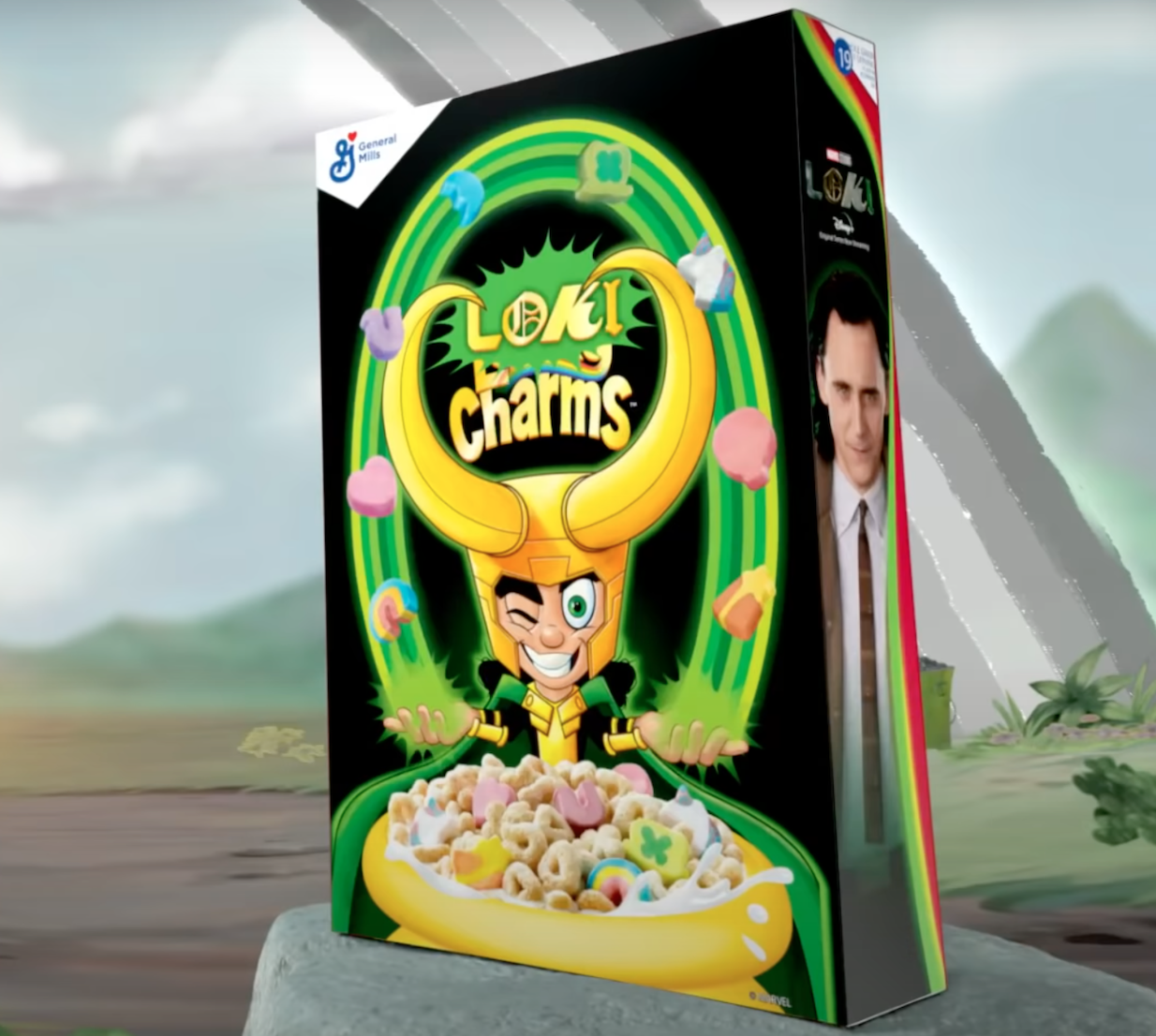 Marvel fans are buying out limited-edition Loki Charms cereal boxes ahead of the show’s premiere, Yeezy Gap’s first product drop is also selling out online, summer moviegoers are excited for In The Heights, and the Asian cast members of Kim’s Convenience are speaking out against the lack of diversity behind-the-scenes—plus other news taking over social media this week! 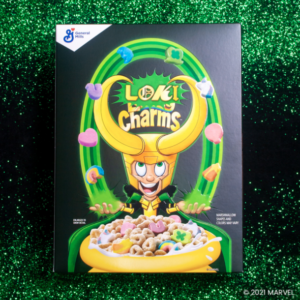 On Wednesday, Marvel Studios and Disney+ aired their latest Marvel show Loki—a series centered on Thor’s brother Loki, portrayed by Tom Hiddleston, who ends up in the Time Variance Authority’s headquarters following the events of Avengers: Endgame. Of course, Marvel fans have been anticipating its release for months: Ahead of the premiere, the sponsored hashtag #CountdownToLoki was trending on Twitter, while the hashtag #loki has 5.5 billion views. Some brands are getting into the hype too. General Mills collaborated with Marvel for a limited-edition, green cereal box from its Lucky Charms brand, geniusly named Loki Charms. Only 3,500 boxes were available with a price tag of $8. A presale was also available for the first 1,000 customers at MischievouslyDelicious.com who could guess “the magic encryption password,” the boxes sold out minutes after dropping. Resellers on eBay are already listing the box on the site for hundreds of dollars. Meanwhile, Loki’s gender also stirred a lot of conversation online: A few days before the premiere, Marvel Studios tweeted a new teaser clip, which got 439.2K views, that lists the antihero’s sex as “fluid.” While the God of Mischief has always been identified as genderfluid in the Norse mythology and comic books, the new show confirms and sheds light on them. (YPulse will also be exploring the topic of Gen Z’s gender fluidity more in our upcoming Gender Blenders trend research.) But this isn’t the first time Marvel Studios and Disney+ has explored topics in their shows that are relevant with young consumers: WandaVision has been lauded for its depiction of mental health, while The Falcon and the Winter Soldier addressed race head-on by chronicling Falcon/Sam Wilson’s journey into becoming the first Black Captain America. 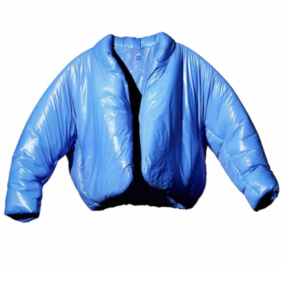 The First Piece in the Yeezy Gap Line Sold Out Within Hours
Loki Charms aren’t the only thing selling out this week. Last summer, Gap announced that they were collaborating with Kanye West to form Yeezy Gap, which is the new collaborative line between the retailer and the rapper. Now, the first item for the collection dropped on Tuesday to coincide with West’s 44th birthday—and it sold out within a few hours. The piece is a $200 bright blue unisex nylon puffer jacket that customers were able to preorder online, and will begin shipping in the fall. And just like the Loki Charms boxes, resellers are all over eBay listing the jacket for up to thousands of dollars. While other products haven’t been announced yet, Gap initially described the collaboration as a line that would feature “modern, elevated basics for men, women and kids at accessible price points.” Pint-sized streetwear has been appealing to Millennial parents for years, and Gap is smart to tap into the trend. In recent years, the clothing retailer has been “suffering from a loss of identity” as their “mass appeal” has started to fade, and they have been finding new ways to connect with young customers especially as malls continue to become “a dying breed.” Along with the launch of Yeezy Gap, their strategies include launching campaigns like “Stand United,” which included “virtual activations and events encouraging voter registrations.” 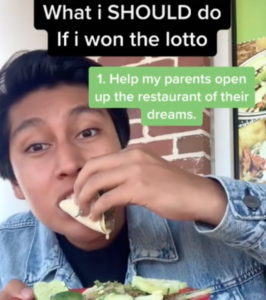 In The Heights is Already Shaping Up to Be One of the Summer’s Biggest Movies
On Thursday, Warner Bros. released In The Heights in theaters and HBO Max, and ahead of its premiere, fans were already hyping up the movie musical. The movie, which is directed by Crazy Rich Asians director Jon M. Chu and based on Lin-Manuel Miranda’s 2008 stage musical of the same name, takes place in NYC’s Washington Heights neighborhood and centers on bodega owner Usnavi de la Vega (played by Anthony Ramos) who dreams about having a better life. Already, the movie is being showered with positive reviews and praised for celebrating Latinx culture. (YPulse’s Representation in Action trend report found that 59% of 13-39-year-olds say it is important that I see people of my race / gender / sexual orientation in lead roles.) And in the weeks leading up to the film’s premiere, a challenge on TikTok has emerged with users using the songs “96,000” and “In The Heights” from the musical—and imagining what they would do with $96K if they won a small fortune from traveling around the world to opening up a restaurant. So far, the sponsored hashtag #InTheHeightsChallenge has a whopping 7.9 billion views. In one video that has 466.6K views, user @crimsyn.co listed all the things he “should” spend the theoretical money on, like student loans, putting it into a 401K and IRA, or saving up for a house—but instead would probably spend it on “amazing drag outfits.” Brands have been taking advantage of the movie’s premiere as well: Roblox just hosted a block party inspired by the Washington Heights neighborhood, Anheuser-Busch-owned beer brand Presidente hosted a giveaway to give people the chance to win $96K, and HBO Max launched a three-day pop-up experience around NYC. It shouldn’t come as a surprise that In The Heights has become one of the year’s most anticipated releases. Last fall, fans were already excited for Miranda’s other Broadway phenomenon Hamilton to finally drop on Disney+—so much that it led to a boost in subscribers and app downloads. We already told you about how young consumers are excited to get back to the movies this summer, and clearly excitement about this film is mounting as well. 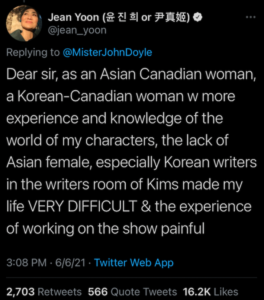 Earlier this month, CBC debuted the fifth and final season of their hit Korean-Canadian sitcom Kim’s Convenience, which is also streaming on Netflix. While the show, which centers on the Kim family and the convenience store they run in Toronto, was once praised for its depiction of race, identity, and immigrant experiences, its cast is revealing the true behind-the-scenes story of the last seasons. On the day of its premiere, one of the show’s lead actors Simu Liu (who will also be starring as the titular superhero in Marvel’s Shang-Chi and the Legend of the Ten Rings) spoke out in a lengthy Facebook post, which received 15K likes and 2.7K shares, revealed the truth about why the show was ending, how the  actors were paid a “horsepoop rate,” how the lack of diversity among producers contributed to lazy character development as the seasons progressed, and how the one white character on the show was getting her own spinoff. Then, Liu’s co-star Jean Yoon, who portrays his mother on the show, tweeted, in a post that received  16K likes and more than 2.6K retweets, that the lack of Asian females, especially Korean writers, in the writers room made her life and experience working on the series “very difficult.” In a separate tweet, Yoon also revealed that the storylines from the most recent season were “overtly racist.” YPulse’s Representation in Action trend report found that 51% of 13-39-year-olds believe stories centered around BIPOC individuals should be written by BIPOC individuals—and the backlash from the Asian cast members of the show against their producers and writers is just proof of what happens when that doesn’t happen. 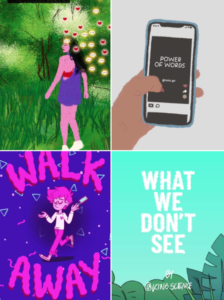 Thanks to an “Adult Swim commercial bumps” trend taking over TikTok, users are feeling nostalgic about the network’s popular shows.

S’mores boards are the new food trend of the summer.

This TikToker is gaining thousands of followers for making satirical videos where “white people are treated as a minority.”

As if! Alicia Silverstone re-created a scene from the hit ‘90s flick Clueless with the help of her son.

After this bakery in Texas lost out on an order and received some hateful messages on Facebook for selling Pride-themed cookies, they received an outpouring of support from their community.

Miranda Cosgrove re-created the popular meme starring her for the opening of the anticipated iCarly reboot.

After blowing up at the end of last year, Ratatouille: The TikTok Musical is making plans to enter the Emmys race.

Netflix’s hit YA fantasy series Shadow and Bone has been renewed for a second season—and the streaming service revealed that it was watched by more than 55 million member households.

After four years, Lorde has finally released a new song.

Following the controversy and racism accusations surrounding The Bachelor, host Chris Harrison is officially leaving the franchise for good.