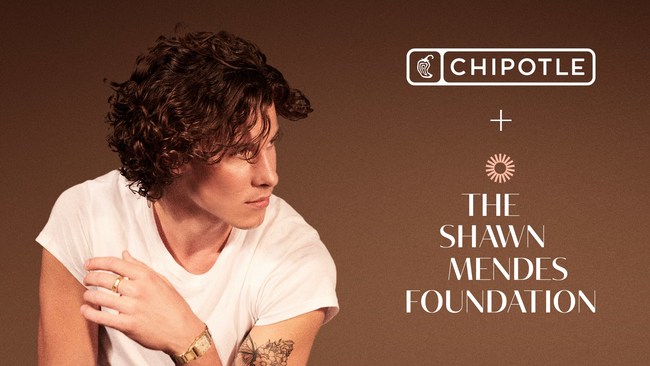 During a tough year for the restaurant industry, these fast food brands turned to good old celeb and influencer collabs to reach young consumers…


Celebrity collaborations have been a popular concept for years, but in 2020, they were especially popular. Companies, especially fast food brands, pivoted into full-fledged lifestyle brands and partially relied on those collaborations to reach young consumers, and save their businesses during a time when several restaurants were forced to either shut down or limit capacity at their locations.

Perhaps the biggest collaboration (and most viral) that started it all—took place in September when McDonald’s worked with rapper Travis Scott (who was already having a massive year following the successful Fortnite concert) to create the “Travis Scott Meal,” which was inspired by his favorite order. Not only did they launch a meal, but Scott’s record label Cactus Jack partnered with the food chain for a merch drop that included t-shirts, hoodies, shorts, sweatpants, lunchboxes, cereal boxes, cardboard cutouts of a Scott action figure, house slippers with fry laces, and a $90 nugget body, which instantly sold out and kicked off the wave of weird products in 2020. As a result of the collaboration, McDonald’s reported that Scott’s meal collaboration helped boost their sales: At the end of September, they reported that comparable sales at U.S. restaurants rose 4.6% in three months after they were down by 8.7% the year before.

It shouldn’t come as a surprise that young people are more inclined to buy things from celebrities they’re fans of. After all, YPulse’s influencers and celebrities report found that 49% of 13-39-year-olds have purchased something an online celeb recommended. Here are the brands who have worked with today’s biggest celebrities and influencers to reach young consumers: 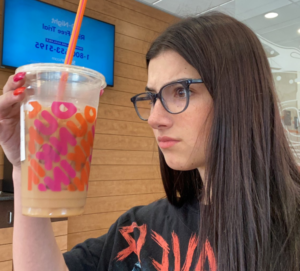 In their first move collaborating with an online influencer (and the same month as the Travis Scott partnership)—Dunkin’ teamed up with TikTok’s biggest star Charli D’Amelio, and the results proved to pay off. For their partnership, Dunkin’ introduced “The Charli,” a new whole milk and caramel swirl drink named after the influencer, and it earned the brand millions of views on TikTok after D’Amelio shared content of herself ordering the drink through one of the chain’s drive-throughs and participating in a dance challenge (with an original song) which equally generated millions of views. According to Dunkin’, The Charli resulted in “myriad business bumps.” First, they sold “hundreds of thousands” of drinks within the first five days of its debut. The day of launch set a record of daily users on the Dunkin’ Donuts app where users could preorder the bev for pickup—and D’Amelio triggered a 57% increase in daily app downloads. The company added that they saw a 20% sales boost for all cold brew coffee sales the day of the launch as well as a 45% surge in cold brew sales the following day. In the last year, D’Amelio (and her sister Dixie) have become one of the most popular creators on TikTok securing several partnerships with brands like Hollister, Orosa Beauty, and the launch of their Gen Z-focused sub-brand Morphe 2. And despite a very minor setback late last year, D’Amelio’s quick shot to being the first creator on the platform to reach 100 million followers shows how her and her family will continue to be massive stars well in 2021 and beyond. 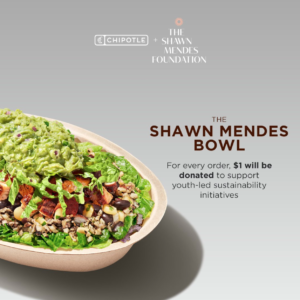 Last month, Chipotle went viral after they participated in a TikTok challenge that featured Miley Cyrus. As part of the challenges, fans on the app wrote the caption “If Miley Cyrus comments, I’ll do something”—which, straightforwardly, involved users posting a video saying they’ll engage in outrageous tasks if the singer replies. Cyrus responded to quite a few of them, influencing some major life decisions including shaving their head or getting married. Then Chipotle couldn’t resist and joined in: They shared a post (which garnered 189.9K views) that read “if miley cyrus comments we’ll make a miley burrito in our app”—and she responded. The fast casual chain quickly created the “Guac Is Extra But So Is Miley Burrito” inspired by her favorite order: a veggie-friendly burrito made up of guac, white rice, black beans, fajita vegetables, roasted chilli corn salsa, tomatoes, and romaine lettuce—for a limited time via through their app or site. The impromptu collaboration led a more formal celebrity partnership with Shawn Mendes. This week, Chipotle announced that they were working with the singer for the “Shawn Mendes Bowl,” which customers can order online or through the app. The meal, which consists of cilantro-lime cauliflower rice, black beans, chicken, roasted chili-corn salsa, romaine lettuce, and guacamole, is a new addition to their menu—and a way to promote their cauliflower options to keto and low carb customers. For every order bowl sold in the next two weeks, the restaurant will donate $1 to the Shawn Mendes Foundation, which gives grants to “empower young changemakers making an impact in sustainability.” 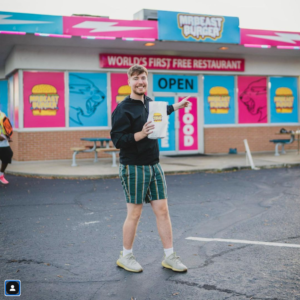 Virtual Dining Concepts and popular YouTuber Jimmy Donldson, a.k.a MrBeast (who has 51.6 million subscribers and is known for his “expensive stunts”) worked together to debut a delivery-only restaurant in the Dallas area. With MrBeast Burger, customers had the opportunity to order food, which included burgers and crispy chicken sandwiches, through the brand’s “proprietary” app or most major food delivery services. The meals were prepared in the kitchens out of Italian-American food chains Brio Italian Grille and a Buca di Beppo’s kitchens. According to one chef, business was “crazy” ever since they launched, and they were able to sell thousands of dollars of worth of food. The partnership with MrBeast not only contributed to influencer collaborations, but it accelerated the trend of “ghost kitchens,” which took off last year. 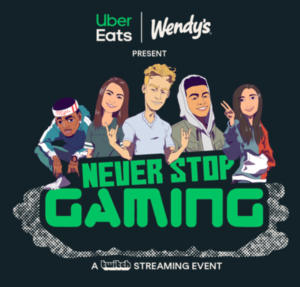 YPulse’s influencers and celebrities report found that 34% of 13-39-year-olds follow gamers on social media. And last month, Wendy’s teamed up with some of Twitch’s most popular gamers, including Tfue, Myth, Flight23white, itsHafu, and xChocobars—all of whom have millions of followers on the platform—for a  limited edition, exclusive “Never Stop Gaming” menu featuring their favorite meal combos, on Uber Eats. For a week, users had the chance to order off the “Never Stop Gaming” menu, which featured a custom meal from each of the creators, ranging from 10-piece chicken nuggets, a Baconator burger, or a Classic Chicken Sandwich combined with small fries (and their drink of choice). As part of the campaign, the streamers also hosted giveaways on their individual Twitch channels with prizes that ranged from “gamer-themed hoodies” to gaming consoles, and each meal ordered automatically gave customers a chance to win. 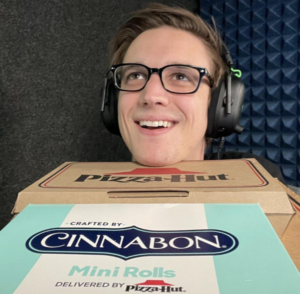 Wendy’s isn’t the only food chain working with well-known gamers in order to reach a younger audience: In November, Pizza Hut premiered their branded series “Friday Night Bites” on Twitch, which ran every Friday and cumulated in mid-December to tout their bestselling menu items and favorites. It was hosted by streamer JERICHO (who has 1.2 million followers on Twitch) and featured celebrities, influencers, and other gamers playing video games and competing in “pizza-themed challenges.” T-Pain, Logic, and Hannah Stocking were among some of the distinguished guests who appeared on the series—and at the beginning of each episode, they “unveil” their favorite go-to order from the restaurant. According to the pizza chain, each of the first five episodes received over one million live viewers for more than 5.4 million total views and more than 26 million minutes watched. As part of it,  viewers and fans who participated in the chats won gift cards from Pizza Hut. YPulse’s Gaming report found that 94% of 13-39-year-olds are playing video games at some capacity, and according to Nielsen’s SuperData’s 2020 report, 55% of people picked up video games during the first phase of lockdowns as a way to escape boredom and reality and to socialize with others. And while experts don’t think the numbers will spike in 2021 as much as last year, they predict that “the long-term habits formed during lockdown are here to stay.” Our gaming trend research also 46% of 13-39-year-olds watch other people play video games, and the viral success of Pizza Hut’s weekly series shows how brands utilizing Twitch as a platform for social engagement can reach millions of consumers—and highlights just how popular gaming content is in general.