#FrozenHoney, #TokyoOlympics, and 5 Other TikTok Hashtags That Trended This Month 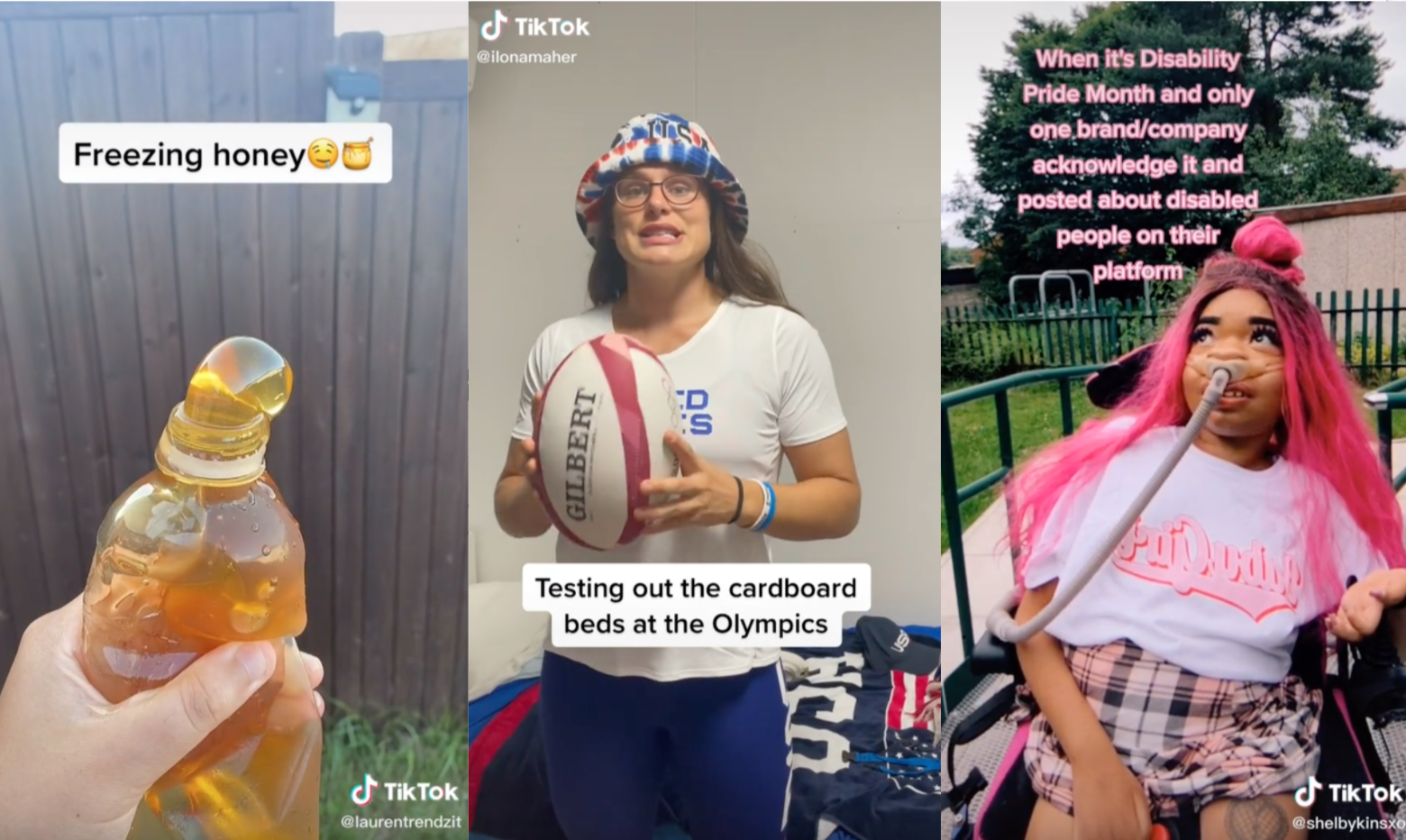 From #AdultSwim to #HoldMyMilk, we told you about the many hashtags that took over TikTok last month. So far in July, users have been asking strangers to fund their #venmoroadtrip, while contrasting career-focused trends like #TikTokResumes and #QuitMyJob have dominated young people’s feeds. However, those aren’t the only trends that are racking up millions, or billions, of views. From parents sharing a glimpse into their lives to users raising awareness for Disability Pride Month to yes, even more food trends, here are just some of the most popular TikTok hashtags brands should be paying attention to this month: 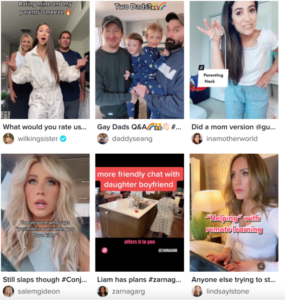 We told you how hashtags like #UglyBabies (4.7 million views) and #MomBods (35.7 million views) were going viral as Millennial moms shared honest videos that showed off their post-baby bodies and their less-than-cute kiddos. #MomTok, which has 3.8 billion views, has also become a popular hashtag and features young moms who are “less Real Housewives and more real train wrecks,” sharing real, messy, and humorous glimpses of parenting life. The hashtags follow a larger trend as more parents get on TikTok to share scenarios and goings-on in their daily lives. The hashtag #ParentsofTikTok, which currently has 7.8 billion views, was trending on the app this month, and features everything from moms trying to balance remote work while taking care of their children to parenting hacks to deal with child-rearing problems. Some teens and young adults are also using the hashtag to show their appreciation for good old mom and dad, and to participate in challenges with them—a trend that took off during the start of the pandemic. YPulse’s social media monitor report found that 43% of Millennial parents are using the app, and with #ParentsofTikTok and other related hashtags taking off and amassing billions of views, it just goes to show that the platform is becoming a space for users beyond just teens and young people. 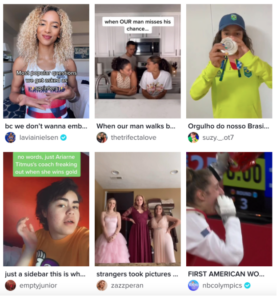 We told you how many young consumers planned to tune into this year’s Tokyo Olympics, and while the ratings for the games have dropped on TV compared to previous years, a lot of young users still talked about the big event on social media. Using the hashtag #TokyoOlympics, which currently has 3.2 billion views, TikTokers are talking about their favorite Olympians, sharing their favorite moments and facts about this year’s Games. Olympic athletes like rugby player Ilona Maher are also using the hashtag to give fans a behind-the-scenes look at the games and the Olympic Village. We tracked the trend of athletes jumping on TikTok to connect with fans since last spring, and athletes doing it for the Summer Olympics certainly is a way for viewers to get to know them better. #OlympicSpirit also trended this month, garnering 1.3 billion views, with users sharing how they’re getting into the spirit of the event—like reminiscing on some of their favorite moments from the current and past Games. Meanwhile, Twitter created a custom GOAT (a.k.a “greatest of all time”) emoji in honor of Simone Biles ahead of the games that featured. To activate it, users had to use the hashtags #SimoneBiles or #Simone—and so far, it’s generated a lot of posts. Following the news that Biles was dropping out of the Olympics to focus on her mental health, plenty of users showed their support for the gymnast by using the hashtags. On TikTok, the hashtag #SimoneBiles also accumulated 342.5 million views. If there’s anything the popularity of these hashtags prove, it’s that traditional TV ratings aren’t the only way to gauge young sports fans’ interest in the Olympics and other live sporting events. 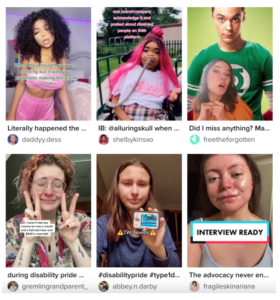 Since 1990, advocates have celebrated Disability Pride Month in July—the same month and year the Americans With Disabilities Act of 1990 (ADA) was passed, which prohibited discrimination against people with disabilities in several areas, including employment, transportation, public accommodations, and access to government programs. This month, disabled users and influencers on TikTok used the hashtag #DisabilityPrideMonth, which has 49 million views, to celebrate the 31st anniversary of the law—and to promote self-love, educate others on why Disability Pride matters, raise awareness on ableist language, and call out major brands for their lack of support. Model and Encephalitis survivor Lucy Dawson (a.k.a @ludawinthesky) praised Pretty Little Thing and BPerfect Cosmetics for being the only two non-disabled brands who supported Disability Pride Month, while @shelbykinsxo said in a video that she only noticed one company showing their support. At the end of 2019, TikTok was called out for reportedly blocking disabled users from going viral, and highlighting Disability Pride Month and its corresponding hashtag as well as disabled creators is a clear effort to learn from past mistakes. Other brands should take note, and take the time to listen to the communities who are often underrepresented or feel ignored. 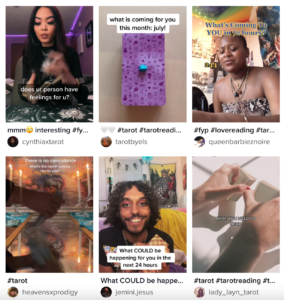 We’ve been tracking young people’s interest in all things supernatural, mystical, and magical for years, and YPulse’s most recent religion and spirituality behavioral survey found “spirituality” practices like astrology, dream interpretation, essential oils, witchcraft, and tarot are more popular that ever among young consumers. Our research found that 62% of 13-39-year-olds say mystical healing / supernatural practices are becoming mainstream. The percentage of young people who say mystical healing and supernatural powers can influence health has increased by 19pts compared to 2017, and 63% agree it can be a part of self-care—and their interests are certainly evident on TikTok. The #tarot hashtag, which has 10.2 billion views, has recently been trending on the app, with users sharing their tarot card decks and interpreting them for viewers, like predicting if they’ll be in a new relationship, or sharing which characteristics will bring them positivity in their lives. Previously, the #WitchTok community has generated billions of views on the app, and TikTok witches have come together to hex the moon and share spells. The #tarot hashtag is another sign that mystical and supernatural content is a fun form of escape for Gen Z and Millennials. 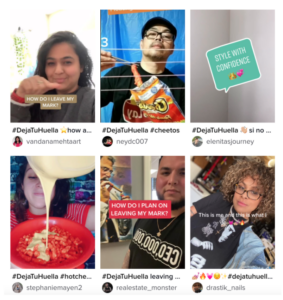 Cheetos recently announced a new partnership with rapper Bad Bunny for an exclusive, limited-edition Adidas fashion collection by using innovative digital technology involving a little Cheetos dust. To score early access to the Cheetos x Bad Bunny Collection by Adidas, fans must use the cheddar dust (a.k.a “cheetle”) to try and unlock the collection. To kick off the collab, Cheetos launched a sponsored challenge using the hashtag #DejatuHuella, which currently has 4.8 billion views. To coincide with the upcoming back-to-school season, the brand is calling for students to use the hashtag to share 60-second videos and show how they’re “leaving their mark” in their respective communities. One user @disnara showed how as a student nurse, she’s been helping to give out vaccines in NYC to patients during the pandemic, while another user @brycoug10 shared about how they’re leading the Farmworkers’ Rights marches in Eastern Washington. Ten students each will be awarded with $50,000 that can go towards their education. If brands want to get a sponsored hashtag to trend and get billions of views, offering a cash prize is certainly one way to go. 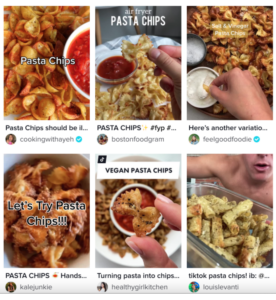 TikTok wouldn’t be TikTok if it didn’t supply the world with an endless amount of food trends—no matter how much it divides the internet. The dish that took over everyone’s feeds this month are pasta chips, which involve an air fryer, olive oil, plenty of cheese, seasoning, and of course, pasta. It’s a simple recipe, and all that needs to be done is for the air fryer to be set around 400 degrees and let the pasta fry for around 10 minutes. After that, all that’s needed is a “tasty dip,” like pesto or marinara sauce. While the trend blew up at the very end of June, it can be traced back to April when TikToker (and previous MasterChef participant) @nick.digiovanni prepared a version of it using bowtie pasta and marinara sauce. It has become so popular that many people have started sharing recipes that don’t need an air fryer to accommodate those who don’t own one. The hashtag #pastachips has 788.8 million views, and users have shared their own takes on it by using different kinds of pasta and pasta sauces. From baked feta pasta to honeycomb pasta to #EatABowlOfRigatoniPastaOnMay242021, pasta-based dishes have certainly been a hit on TikTok—and will likely continue to be. After all, YPulse’s Comfort in the Kitchen trend research found that 50% of 13-39-year-olds eat pasta for dinner on a typical weekday. 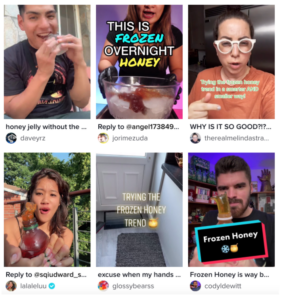 But of course, pasta chips aren’t the only food trend taking over TikTok feeds this month. TikTokers started a trend that involves making frozen honey, or frozen honey jelly, to stave off the summer heat. To make it, all that’s needed is honey and a “small squeezy bottle.” After squeezing the honey into the bottle, it can be popped into the freezer for a few hours, taken out, and enjoyed! The honey turns somewhat solid and can be bitten and chewed. So far, #frozenhoney has 313.6 million views, while #frozenhoneyjelly has 1.4 million views. However, that’s not the only cold, sweet treat trending on the app. “Whipped lemonade” is also racking up videos and views. While there’s various versions of it, like the one that involves lemonade powder mix in America, the Western European-based one is made with squirty cream and condensed milk. So far, the hashtag #whippedlemonade has 4.6 million views on TikTok, and while recipes vary and can be easily modified, a popular one shared by user @mtlajeunesse involves sticking ice, squirty cream, condensed milk, and lemon juice into a blender before giving it a good “blitzing.” Last year, we told you White Claw slushies were the drink of the summer on TikTok, and clearly coming up with an ice-cold, sweet drink or treat to cool them down during the hotter months is one way into a young TikToker’s hearts.