TikTok Hashtag Roundup: What Trended on the App This Month

YPulse’s Social Media Deep Dive trend report found that TikTok is the top platform that young consumers think trends are created before catching on with everyone. The belief that TikTok is a trend hub is strongest among Gen Z: A full 60% of 13-19-year-olds say TikTok is the social platform where trends are created (versus 36% of Millennials). Hashtags and audio are the backbone of the spread of trends on the platform—and can provide a window into what Gen Z and Millennials are listening to, buying, eating, laughing at, and more.

From #WalmartJeans to the #GucciModelChallenge, we’ve tracked trending hashtags to help brands understand what young people are engaging with on social media, and how it impacts them. Today, we’re rounding up some of the most recent viral hashtags on TikTok to give you a glimpse of the variety of content that’s racking up millions of views on the video platform: 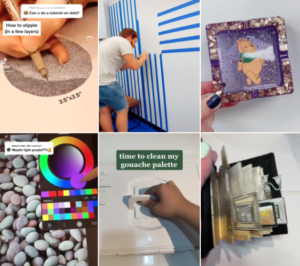 From #WitchTok to #BookTok, there’s a lot of niche communities on the app. But one of the hashtags to gain traction this month is #ArtTok, which currently has 1.2 billion views. The hashtag features artists sharing videos of themselves drawing, painting, or participating in various art mediums. But there’s also videos of users touring museums, and showing off their favorite works of art. And it recently caught the beauty community’s attention—and has been utilized by some beauty brands who have enlisted art-focused influencers to create art pieces with their products. For instance, Eos recently boosted their ad spending to recruit 11 influencers including Devon Rodriguez (@devonrodriguezart), Audrey Hopkins (@auditydraws), Ashley Xu (@ashhasacamera), and Thomas Johnson (@thomas_johnson_) to promote their Flavor Lab lip balm. Each creator made a video with their “own spin” on the beauty item: Rodriguez, who has nearly 16 million followers and who frequently tags his videos with the #ArtTok hashtag, recreated one of his “signature subway portrait videos,” while paint-mixing ASMR influencer Johnson, who has 3 million followers, shared a colorful paint bucket video blending the lip balm into it. #ArtTok is all about users showing off their creativity, and for brands, finding ways to encourage and showcase that creativity is a clear win. 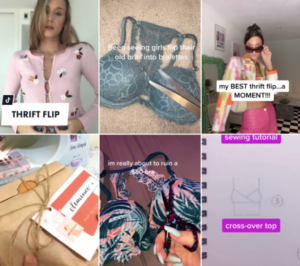 #ThriftFlip (1.4B Views)
In recent years, young consumers have been getting more sustainable and mindful about the kind of shopping they do, especially when it comes to clothing. Earlier this month, a #thriftflip hashtag, which has 1.4 billion views, started trending as users on the app started showing off their secondhand purchases instead of regular clothing hauls. The hashtag #thriftflips has 14.8 million views. On the hashtag, many users are seen showing off the clothes they bought from secondhand stores and thrift stores while transforming them into an entirely new outfit. The hashtag has been trending this month, but it actually has a longer life. According to Tribal Dynamics, the number of posts across social platforms and blogs that were tagged #ThriftFlip increased 236% between the second quarter of 2019 and the first quarter of 2020. Glossy reported that “six of the ten highest-performing posts tagged #ThriftFlip was made on TikTok or referenced in a TikTok post.” The fact that young consumers are proudly showing off secondhand finds is another indication that their fashion choices are increasingly tied to their eco-mindedness, but also that their idea of status is different from previous generations’. Thrift is something to be proud of and show off, and luxury labels aren’t necessarily a part the equation. 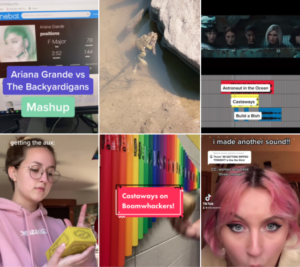 #Castaways (301.9M Views)
Last week, we told you how the 2005 tune “Castaways” from Nickelodeon’s animated kids’ shop The Backyardigans shot up to the top of Spotify’s Viral 50 chart—but the song and its corresponding hashtag, which has gone from 108 million views last week to currently 301.9 million views—and has consistently appeared on TikTok’s “Discover” page since, and the track itself has 464.7K videos. The #Castaways viral moment started when user @swagsurff, who regularly “champions The Backyardigans musical canon” on the app posted a video, which has received more than 586.5K views, of herself dancing to the tune. Since then, users have been making memes, parodies, remixes, and covers of (and featuring) the song contributing to “an unstoppable wave.” Another user @saintkaisir shared a video, which received two million views, who used the song last week has been credited for the bump in streams that pushed it to the top of Spotify’s music chart. The popularity of “Castaways” just shows how children’s songs continue to blow up on the web, and TikTok certainly knows how to make songs from any era and genre to go viral, like Baby Shark (doo, doo, doo, doo, doo, doo.) 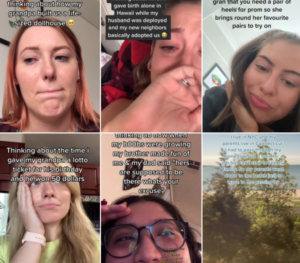 #SlippingThroughMyFingers (226.4M Views)
“Castaways” isn’t the only older song that trended on the app this month. ABBA’s 1981 song “Slipping Through my Fingers” (which was also re-popularized by 2008’s Meryl Streep-led movie musical Mamma Mia!) had a moment as well when it was featured in a new challenge. In a “wholesome” trend on the app, TikTokers used the song to recount nostalgic family memories, and share other moments that inspire “aw” reactions. One of the most viral clips from the trend is from @bardtard, who shared a video that has received more than 14.6 million views, where she reminisces on how her father once accidentally threw out her cookie cutters and ended up making new ones. Another video from user @kaylablock, which has 11.1 million views, recounts the time her grandma offered to lend her the “perfect outfit” when she had nothing else to wear. The track features 59.9K videos on the app, while the hashtag #SlippingThroughMyFingers now has more than 226.4 million views. During the pandemic, young consumers have been clinging on to nostalgic and pure moments that bring them comfort. 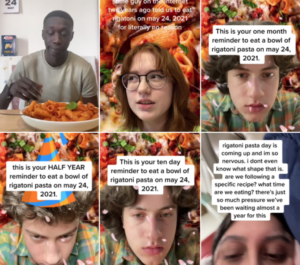 Food trends have always been a big hit on the app and since the start of lockdowns, they’ve become even more massively popular especially as young consumers spend more time cooking in their own kitchens. We told you how “TikTok pasta/ TikTok recipes” was the top food trend young consumers were the most interested in—and it’s evident. Within just a few few months, a feta pasta dish took over TikTok (with the #fetapasta hashtag generating 957.3 million views) followed by a honeycomb pasta dish that divided the internet. Now, rigatoni is having a moment. The hashtag #EatABowlOfRigatoniPastaOnMay242021 currently has 82.2 million views—and since January, user @jimmyrules32 has been “devoted to his mission” thus birthing “Rigatoni Pasta TikTok.” His initial video features a bug crawling on a wall with the words “eat a bowl of rigatoni pasta on may 24 2021” flashing across the screen and an instrumental version of “Funkytown” playing in the background. Since then other users have dedicated themselves to the mission as well. One account with the handle @rigatonipastacountdown (which has 145.6K followers) has been posting daily reminders for the last few months leading up to the day. It got so much attention that Barilla got in on the hashtag ahead of May 24 by debuting a parody of the Lipps Inc. song “Funkytown,” with lyrics centered on rigatoni. The pasta brand teamed up with Italian TikTok creator Khaby Lame (whose @khaby.lame account has 59 million followers) to promote its tune and the “fake pasta-themed holiday.” The effort is an example of a brand jumping into an organic hashtag and finding a way to put their own mark on it. 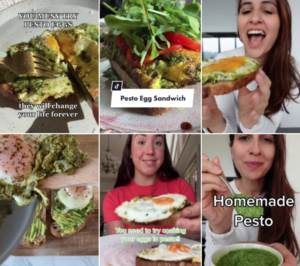 Pasta isn’t the only food that was trending on the app this month. A simple breakfast-focused dish has been taking over the platform in the last few weeks: Pesto eggs. So far, the #pestoeggs hashtag has 135.2 million views. The recipe gained traction on the app at the beginning of the month when TikToker and registered dietician Amy Wilichowski (whose @amywilichowski account has 35K followers) shared a video, which received 11.1 million views, of herself cooking up the meal. In it, Wilichowski drops spoonfuls of basil pesto into a hot pan before cracking eggs directly into it. Since then, she’s shared different dishes where she adds in the pesto eggs, and even updated her profile bio to say “i’m the pesto egg girl”—and since then, other users have followed suit by sharing their own videos and twists on the recipe. But this isn’t the first time the recipe has appeared in pop culture: The concoction got a shout out from Captain America himself (a.k.a actor Chris Evans) during a Men’s Journal interview from 2019 where he said: “I don’t know if you’ve ever had pesto eggs, but if you haven’t, you’re missing out.” There seems to be no end to the food trends that captivate TikTok—and we even found that TikTok recipes are the biggest food trend that young consumers have been interested in. The recipes tend to have a few things in common: they’re usually fun twists on known ingredients and are both accessible but unexpected cooking projects.