A new “honeycomb pasta” is causing chaos on the internet and Totino’s has a tasty twist on their famous pizza rolls, the new Dolly Parton-inspired ice cream flavor crashed the Jeni’s site, a TikToker is breaking down vaccine science, while a gymnast proudly shows off his vaccine card, and Twitter users are claiming celebs as their grandparents—plus other news taking over social media! 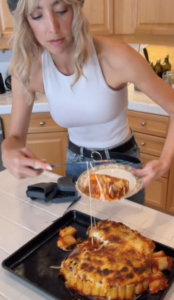 A New “Honeycomb Pasta” TikTok Recipe Is Dividing the Internet

Quarantine food trends just keep on coming—and the latest one to take over TikTok is “honeycomb pasta.” It all started when Anna Rothkuss (a.k.a @bananalovesyoutoo—who has 237.9K followers on TikTok) shared a video of herself filling a springform cake tin with “tubular pasta,” filling each tube with string cheese, topping with tomato sauce, ground meat, and a layer of yet more cheese—and finally putting it into the oven to bake. The finished product results in a “lasagna-esque sliceable pasta cake,” and the video has received 11.8 million views, However, the honeycomb pasta cake is dividing the internet. Across TikTok and other social platforms, many have criticized the dish and called it “cursed,” with plenty of users saying that it’s “just a pasta casserole.” Meanwhile, the honeycomb pasta isn’t the only twist on an Italian dish trending on TikTok this week: Totino’s shared a video on their official account, that received 1.6 million views, making parmesan garlic pizza rolls—and users are commenting saying that it looks “delicious” and are urging the food brand to even make it one of their regular flavors. The video shows viewers that they simply have to do is while their pizza rolls are cooking in the air fryer (or oven), they just need to grab some minced garlic-infused butter, microwave it for a few minutes and drizzle it over the newly baked pizza rolls along with some parmesan (and optional parsley.) Just last month, a baked feta pasta dish was the talk of the TikTok food space. 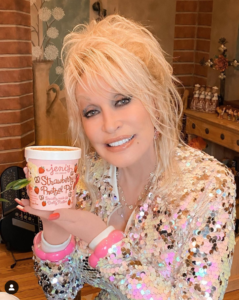 Dolly Parton is making headlines again this week, but this time it’s for ice cream. In late March, Jeni’s Splendid Ice Cream announced that they were teaming up with the musician (who shared news about the collab on Instagram to her 4.1 million followers) to release a limited edition Strawberry Pretzel Pie flavor with only 10K pints available nationwide. The flavor was released online and in stores this Thursday—and demand was so high that it immediately crashed the Jeni’s site when it dropped, leading to both confusion and disappointment from loyal Parton fans. Prior to the release, Jeni’s tweeted “5 minutes” quickly followed by: “Did y’all just break our website?” It was high in-demand in-person too as customers shared images on social media showing lines wrapped around Jeni’s Ice Cream shop locations around the country. One user even tweeted that the ice cream flavor “is harder to get than any Air Jordan [they’ve] ever seen.” YPulse’s Comfort in the Kitchen trend research found that the number of young consumers buying chips, candy and sweets, cookies, and ice cream increased during the pandemic—so it shouldn’t come as a surprise that combined with their love for Ms. Parton, they’d flock to get special ice cream. In the last year, celeb and food brand collaborations have been popular as a way to reach young fans during the pandemic. But this isn’t the first time Jeni’s collaborated with a big star: In 2019, they teamed up with Tyler the Creator for two exclusive flavors, which also “flew off the shelves at the time,” and earlier this year, they released a White House Chocolate Chip flavor inspired by President Joe Biden. 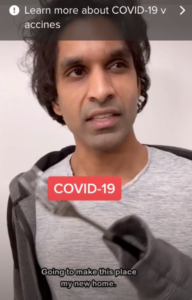 Last month, Vick Krishna (whose @hotvickkrishna account has 190.5K followers) posted a video on TikTok breaking down the science behind mRNA vaccines and how they work—and it’s gone majorly viral on the app. The video, which is set as “a horror film parody” and currently has 7 million views, stars a personified ribosome, mRNA, immune system, new antibodies, and COVID-19 as a defeated monster with “spiky fork hands.” Krishna, who works as a development and operations engineer at NPR, told the publication: “I knew there was a lot of fear and misinformation about the vaccine so I wanted to show in an entertaining way that this vaccine is not what they thought and ease their minds.” With his video gaining traction on the web, Krishna has since shared other videos including one that explains how the one-shot Johnson & Johnson vaccine works, and an explainer on why the Pfizer and Moderna vaccines need two doses to be effective—which have also accumulated millions of views. Meanwhile, a video of University of Illinois gymnast Evan Manivong, went viral this week (garnering 3.7 million views on the college’s official Twitter account), when he whipped out his COVID-19 vaccination card after sticking his landing. Manivong re-shared the video on his own Twitter account adding the caption: “It’s my vaccination card… go get vaccinated everyone!”—receiving 11.4K likes. In general, many young users have been proudly showing off what vaccine they’ve received on social media creating playful “vaccine rivalries” and popularizing “vaccine selfies.” COVID vaccines have started rolling out to more of the public in the last two months, and brands have also been doing the work to encourage people to get them—like Krispy Kreme with their free donut promotion. Meanwhile, some local governments and health departments have recruited “genuinfluencers” to spread the word about the vaccine rollout. 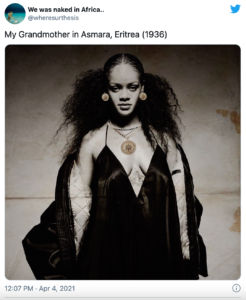 A New Meme Has Twitter Users (Jokingly) Claiming Celebs as Their Grandparents
In the last week, Twitter has been flooded with users sharing black and white or sepia-toned photos of “their grandparents.” But it’s not actually their grandparents. Take a closer look and you may recognize some famous faces. In one popular tweet, user @fuckmigueI tweeted “My great grandma being rescued after the titanic hit the iceberg 1912”—and it’s a screenshot of Kim Kardashian swimming and crying in the ocean (after losing her diamond earring, of course). Other tweets have used everyone from Kylie Jenner to Barack Obama as fake relatives. Celebrities have gotten into the trend as well: Keke Palmer tweeted a photo with the caption “My granny was such a vibe in the 1940’s” and Halle Berry responded with “Baby, that’s KeKe Palmer.”—which crossed over two popular memes (note: a quick explainer on the KeKe Palmer metra train meme.) Aside from celebrities, brands have been getting in on the fun as well, like Netflix who has shared photos of talent from their own movies and shows in the meme. So, why has the celebrity grandparent meme become so popular? VICE explored the trend to try to find deeper meaning, but really it’s just a fun, simple, repeatable meme that everyone can participate in—a classic internet in-joke. If one thing’s for certain, memes (like Bernie and his mittens, for instance) have been a way for young people to feel connected and stay entertained in the last year during lockdowns. 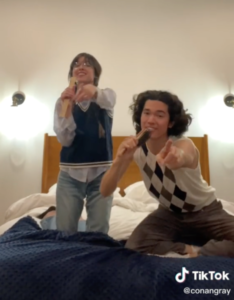 A week following Zola trailer’s release, “y’all want to hear a story” memes are taking over Twitter with users sharing photos of popular fictional (and non-fictional) duos who had a falling out.

The viral tweet about the Fyre Festival is now being sold as an NFT.

Rihanna supported the #StopAsianHate movement by protesting in NYC.

Millennial viewers are very happy that The Nanny is now streaming on HBO Max.