The #GucciModelChallenge Took Over TikTok, Then Disappeared On the Viral List 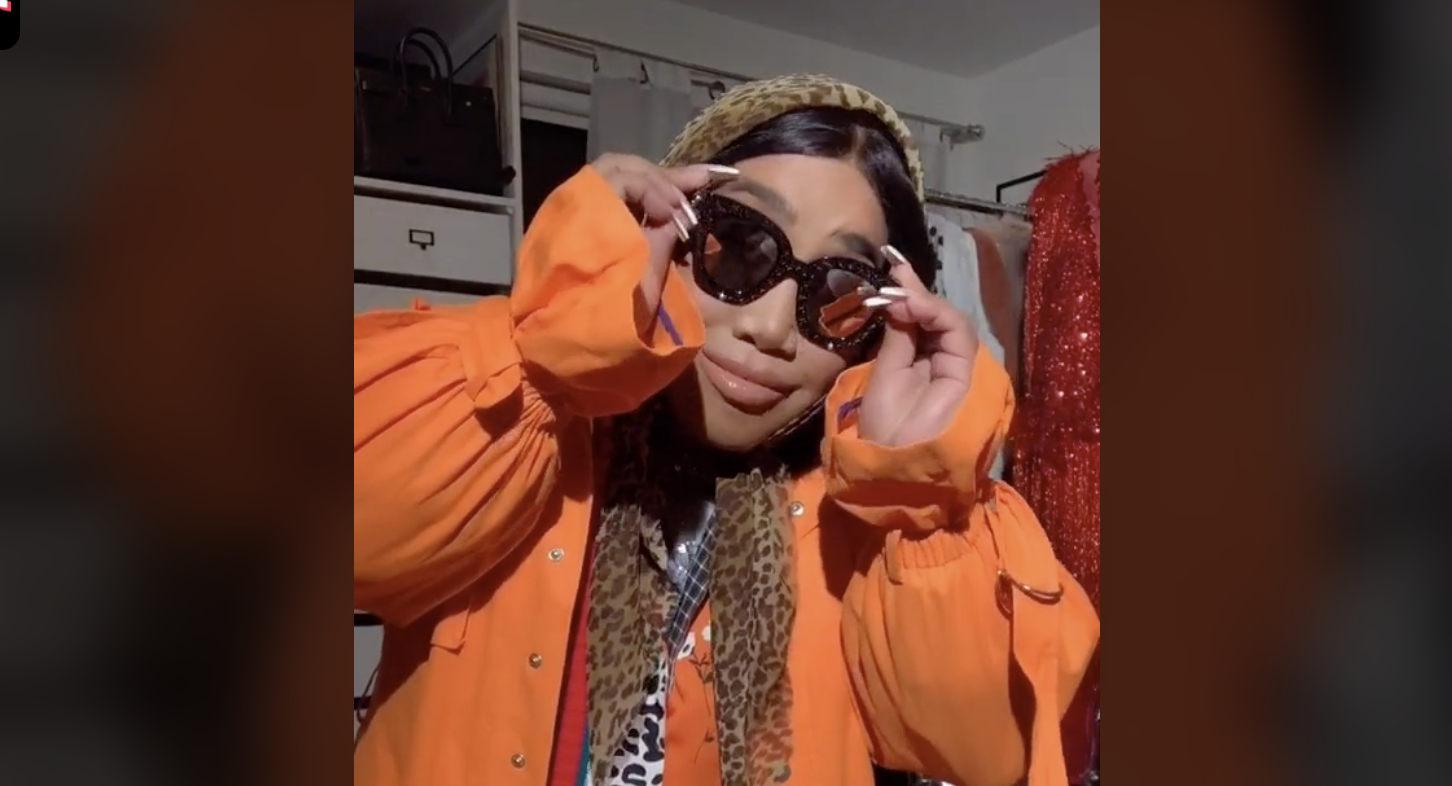 TikTokers were getting their Gucci on with a new modeling challenge that was mysteriously wiped out, major league sports teams are boycotting their games to support Black Lives Matter, this video game has inspired several memes on the internet, and Bella Thorne made millions after joining OnlyFans—plus more stories and youth news you shouldn’t miss this week… 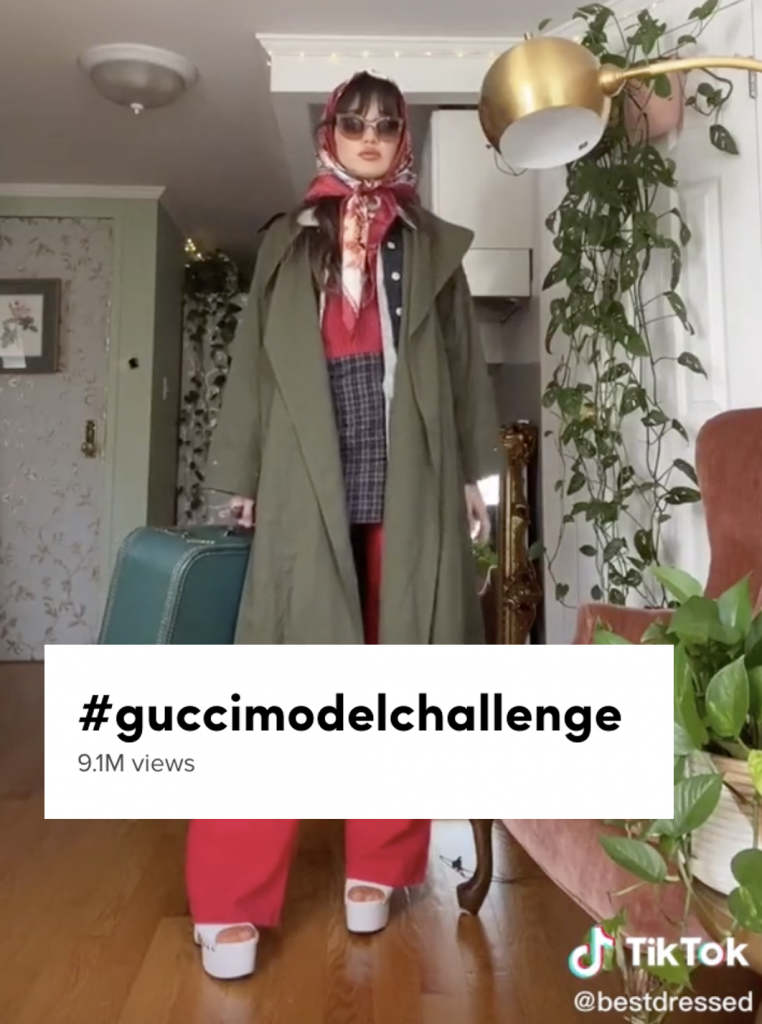 The #GucciModelChallenge Racked Up Millions Before Being Wiped Out

Who’s ready to be Gucci’s next top model? Teens were giving it their best try with the the latest TikTok trend this week.  #GucciModelChallenge had accumulated over 9 million views before the content began to be wiped out. It started when The Chilling Adventures of Sabrina actress Lachlan Watson (who has 196.7K followers) shared audio of herself breaking down how to look like a Gucci model: by wearing a colorful turtleneck, a mismatched shirt, a vest (“layering is important”), bright pink lipstick, and Gucci’s signature silky headscarf (which is a “staple”). TikTokers were using the audio to participate in the challenge, following the instructions to build their own “Gucci” looks. But after racking up millions and millions of views, today the challenge content began to disappear. Videos previously under #GucciModelChallenge are now appearing as unavailable, and Watson’s audio appears to have been deleted (though you can still hear it on some videos that have copied it as their own).  The landing page for the hashtag now appears to show only videos that use other audio. Whether the brand had anything to do with the content purge or it was an audio issue is unclear. But Gucci has been smart about appealing to Gen Z consumers in the past, managing to become a favored luxury brand among next gen shoppers who tend to disregard high-end labels. Starring in an organic—and positive—hashtag challenge is kind of the dream scenario for any brand who wants to target young consumers, so it would be surprising if Gucci is behind the mysterious disappearance of the #GucciModelChallenge content. 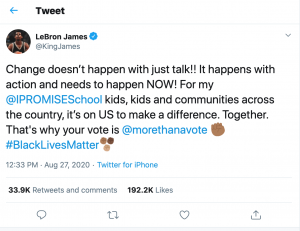 After Jacob Blake was left paralyzed after being shot in the back seven times by a police officer, Black Lives Matter protests erupted across the country—and this time young athletes are taking a stand. Some major league sports teams from the WNBA  and NBA are protesting and boycotting against playing in their scheduled games, resulting in the league postponing several playoff games. A video of the Washington Mystics wearing t-shirts with seven faux bullet holes to represent Blake was shared on their official account and viewed 5.6 million times. The NBA’s biggest star LeBron James spoke up about Blake’s shooting both on social media and on camera, telling reporters: “We are scared as Black people in America…Black men, Black women, Black kids. We are terrified” and a few days later, in a tweet that received 1.3 million likes, James wrote: “F*** THIS MAN!!! WE DEMAND CHANGE. SICK OF IT.” In another tweet, he urged his followers to take action and encouraged them to vote in the upcoming election. Teams from the MLB and MLS followed suit with strikes in protests, as have several independent athletes. Tennis player Naomi Osaka skipped out on playing in the semifinal at the Western & Southern Open in Ohio on Thursday and tweeted that as a Black woman, “there are much more important matters at hand that need immediate attention, rather than watching me play tennis” garnering thousands of likes and responses on the post. Gen Z and Millennials tell YPulse that racism and discrimination is the biggest problem facing their generations today and our Views on America report found that 68% of 13-18-year-olds have participated in protests or awareness. 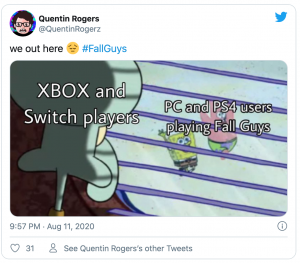 Fall Guys Is the Video Game of the COVID Summer

YPulse found that 46% of 13-39-year-olds have started playing a new mobile or video game because of quarantines and from Animal Crossing to Fortnite and Roblox, young people have been gaming a lot during the pandemic. Now, 60-person multiplayer game Fall Guys is being called the new game of the summer and the perfect “socially distant virtual hangout activity.” The PC and PlayStation 4 party game, created by mediatonic and published by Devolver Digital, uses the “last player standing” and battle royale approach (popularized by Fortnite) and applies it to a series of single-player or team-based mini games. All users have to do is use two button prompts (jump or grab) to play. Anyone who makes it to the finish line or survives a level’s obstacles before time runs out is moved forward to the next round. Through a combination of skill, luck, and competing against other players, the remaining gamer wins the “coveted crown.” The game has been spawning so many memes featuring players’ “bad luck and destruction” that even non-players are catching on. According to Sony, the title has become their most downloaded PlayStation Plus game of all time. The game has consistently been on Twitch’s viewership charts, and the Fall Guys official Twitter account has more than 1.2 million followers, and has consistently been on Twitch’s viewership charts. Devolved Digital reported that the game has sold more than 7 million copies on Steam for PC. Even brands have been catching wind of Fall Guys: On their official Twitter account, they hosted a bidding war and charity auction to see brands would win a costume in the game, and bidet company TUSHY and G2 Esports were just some of the ones who participated. 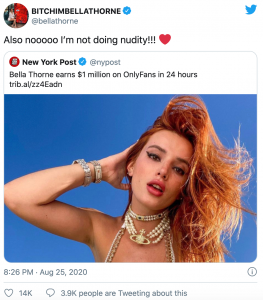 Bella Thorne Earned $2 Million on OnlyFans in a Week

This week actress Bella Thorne launched an OnlyFans account charging subscribers $20 a month, and in a short amount of time made $2 million. If you haven’t heard of OnlyFans, the site is a subscription-based service where creators can earn money from users (“fans”) who subscribe to their content—and has been associated with NSFW videos because of its risqué and explicit content. Since March, OnlyFans has seen a 75% increase in new signups. Thorne joined the ranks of celebrities and influencers like Cardi B, Tana Mongeau, Caroline Calloway, Blac Chyna, and thousands of sex workers who were on the platform way before it became “trendy.” She clarified in a tweet that received 13.9K likes that she’s not doing nudity, but did poll followers on what type of content they wanted to see including “tongue teasing, lingerie, booty, showering, and twerking.” The former Disney Channel star told the LATimes that she is using the site in part as research for an upcoming film she’s starring in and is planning to use the revenue toward her production company and donate to charity. However, plenty of the sex workers who were on the site before Thorne joining aren’t happy about her $2 million payday. In recent months, many sex workers, who have used the platform for years, have been upset and ambivalent about OnlyFans going mainstream. Some have spoken out about how Thorne’s comments about joining the site as research have rubbed them the wrong way: According to sex worker Ellamourne, unless the actress uses her platform and privilege to drive the conversation toward the “decriminizaltion of sex work,” she’ll be disappointed. 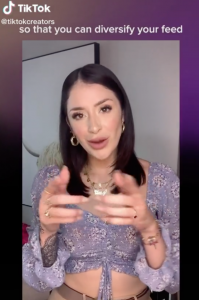 TikTok is using the #diversevoices hashtag to highlight diverse creators for users to follow (and it already has 52 million views.)

TikTokers with a green thumb, and “plant parents,” are showing off their #gardenproject.

Welcome to the 2000s. Thanks to TikTok, scene culture is back in style.

A flight attendant is going viral on TikTok for sharing secrets and tips on how to stay safe in hotels.