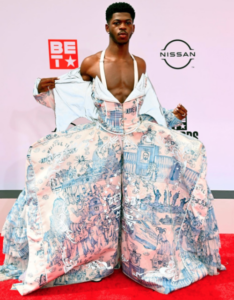 Lil Nas X is on a roll. After going massively viral for his devilish “MONTERO (Call Me By Your Name” music video (and the MSCHF-Nike controversy that followed shortly after)—he’s back on everyone’s radar following this year’s BET Awards. Last weekend, the musician wore not one, but two genderfluid outfits on the red carpet. The first was a floor-length, blue and white toile-inspired gown designed by Andrea Grossi, which featured a flowy structured skirt, corset, and jacket, that was covered in illustrations that referenced war and religion. His other outfit was a floral embroidered suit designed by Richard Quinn. Lil Nas X shared the first gown he wore in a post on Instagram that received more than one million likes, with fans and other celebrities praising his look on social media. Author Saeed Jones re-shared images of Lil Nas X on Twitter and wrote: “Forever proud of this kid. Watching him be free is freeing.” (YPulse’s Gender Blend trend report coming out later this month will dive deeper into the topic of gender fluidity.) His gold-laden, Egyptian-themed performance at the awards also generated a lot of attention: While most of his fans lauded it, Lil Nas X (who has been openly embracing sexuality in the last year) hit back at a few critics who attacked him for kissing his male backup dancer at the end. Meanwhile, a few days after the event, he dropped a trailer for his upcoming studio album, which “spoofed” the opening credits of Marvel Studios. The teaser replicates the same opening sequence as Marvel, but is instead replaced with images and clips of Lil Nas X from his various music videos—and ends with “MONTERO: THE ALBUM.” The trailer has already accumulated more than one million views on Instagram and 1.8 million views on Twitter. If there’s anything that Lil Nas X’s success has proven in the last year it’s that he certainly the Gen Z king of viral marketing. 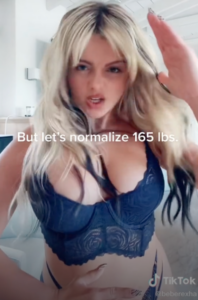 Bebe Rexha & TikTokers are Promoting Body Positivity on the App

This week, singer-songwriter Bebe Rexha shared a video of herself, which received 10.3 million views, wearing lingerie asking viewers to guess how much she weighs. She followed up with the caption, “No ones business. Cause I’m a bad b*tch no matter how much I weigh.” and ended it by writing “But let’s normalize 165 lbs.” Meanwhile, other women on the app are embracing their bodies and calling out “outdated beauty standards” in a new trend It first went viral when user Randi Bosin (@mrsbosin) shared a video of herself, that garnered 4.8 million views, of what she used to wear to the beach compared to what she wears now. In the beginning of the video, Bosin is wearing an oversized t-shirt, knee-length shorts, and a baseball hat that covers her whole body with the caption “This is the type of outfit I wrote to the beach/pool most of my adult life. I was ashamed because society says big isn’t beautiful.” she then transitions into showing off a bikini, with the caption: “I’ll NEVER be ashamed again.” Since then, other women on the platform have been participating in the trend, and putting their own twists on it—using a track that was created by @memomastia_mari. Users are using the hashtags #bodypositivity (12B views), #selflove (19.7B views), #curvyfashion (227.9M views) and more, to tag their videos. We’ve told you how Gen Z and Millennials are the body positive generation, and recently, more and more users on TikTok have spoken out about the topic on the app: Earlier this year, fashion “fit-fluencers” started calling out brands for their “one size fits most” business model, and who didn’t offer enough inclusive sizes—causing hashtags like #stylenotsize (295.2M views) and #normalizenormalbodies (547M views) to trend. Meanwhile, plenty of them have also been promoting brands who are doing exactly that: Last month, a sports bra from Shefit was praised by TikTokers of all shapes and sizes, for offering an expansive amount of sizes. 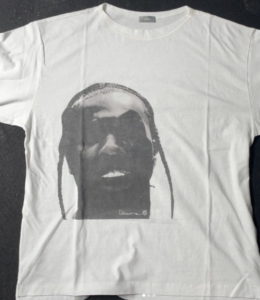 Speaking of viral marketing kings, is there anything Mr. Scott can’t do? After a successful Fortnite concert, menu collaboration with McDonald’s, a fragrance partnership with Byredo, and a spiked seltzer launch, the rapper is now getting into the luxury fashion business—and it has been so anticipated up that it caused a full-fledged riot. Recently, Scott teamed up with Dior for a new Spring/Summer 2022 collection, which features Pop Smoke t-shirts and various pieces “mixed with Cactus Jack motifs.” To promote it, they planned a show during Paris Fashion Week, and during the event, hordes of fans rushed to get a peek of Scott—and things quickly escalated. A barricade blocking them was knocked over, and while a handful of fans made it through, security guards were able to defuse the situation and keep everyone at bay. In a video that received 10.6K views, and was shared by streetwear and sneaker culture blog Modern Notoriety on Twitter, Scott is seen running away from the crowd and screaming “Let’s f*cking go!” before heading into a building with his team. Earlier this week, Scott also teased some of the Dior designs on his Instagram in a post that received more than three million likes. Even though celebrity/influencer and brand collaborations have been around for a while, they have taken off more in the last year—and Scott has been a popular celeb that brands have been flocking to work with, all thanks to his ability to sell out and build hype around his collections. 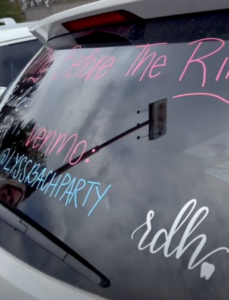 TikTokers are Asking Strangers to Fund Their Vacations, Parties, & Divorces Via Venmo

As young consumers let out their pent-up wanderlust, a trend has started emerging on social media (particularly TikTok) where some users going on road trips are asking strangers to donate to their Cash App and Venmo accounts for vacations, graduations, birthdays, bachelorette parties, anniversaries, and some cases, their divorces. The hashtags #venmo and #venmoroadtrip have 324.1 million views and 91.3K views respectively—and generally, videos feature users sharing their own experiences of collecting cash for their milestone events, and have been viewed thousands and millions of times. For the trend, users write their Venmo and Cash App handles on the back of their car windows asking people to donate to them in real time while they drive. In a video from Kori Roy (@mamaduketv), which received 20.2K views, she shared screenshots of users donating various amounts of money after writing her handles on her car while they were on a road trip. According to Roy, she and her family received more than $500, and didn’t have to use any of their own money for the Airbnb they stayed at in New Orleans. In another video, user @fabuuulyss shared a similar experience on TikTok, which received 7.4 million views, where she racked up money on their way to a bachelorette party. Marketing professor Jenna Drenten at Loyola University Chicago told The Washington Post that the trend is continuation of the crowdfunding trend, which was especially commonplace during the pandemic, when young people asked their peers for money after losing jobs or needed help with healthcare costs: “My perspective is that individuals feel more liberty to share their celebratory experience and to use those same practices that became normalized throughout the pandemic. When we think about well-being during the pandemic, it was survival. Now well-being is celebration and being able to express yourself and enjoy your life.” Meanwhile, this isn’t the only thing Venmo is generating attention for this week. The mobile payment service announced that they were giving away $500 cash prizes to 100 users on Instagram and Twitter (50 on each) if they used the hashtags #VenmoMe and tag @Venmo—and many Instagrammers have been re-sharing the giveaway on their Stories. YPulse’s fintech behavioral report found that 34% of 13-39-year-olds use Venmo, and 45% say sending money as a gift is the top reason they use peer-to-peer payment services. 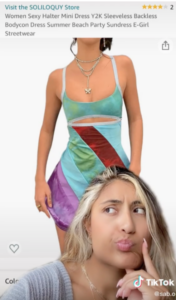 The 2000s galore continues! After the pink velour hoodie from Jennifer’s Body, TikTokers are now obsessed with the colorful dress that Jennifer Garner’s character wore in 2004’s 13 Going on 30.

Zendaya paid a tribute to Gen Z-favorite Beyoncé by wearing the same dress the pop star once wore, to this year’s BET Awards.

Miss Nevada is the first transgender contestant to win the Miss USA pageant.

The internet has a lot of thoughts about IKEA’S “bisexual couch” from their Pride collection.

“Pasta chips” are the latest food trend TikTokers are obsessed with.

Thanks to Lorde, “feral girl summer” is now a thing.