Lil Nas X, MSCHF, and Nike are in a lawsuit battle over a pair of “Satan Shoes,” what brands can learn from the Addison Rae backlash, Clorox and Pose star Billy Porter teamed up for a TikTok challenge, and Volkswagen messed up their April Fools’ Day—plus other youth news that took over social media this week! 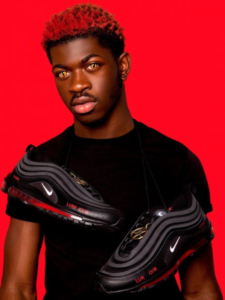 Since last week, the internet hasn’t stopped talking about the devilish music video for Lil Nas X’s new song “MONTERO (Call Me By Your Name”—which currently has 71 million views on YouTube. And this week, a collaboration between the singer and MSCHF, a company known “for creating controversial and viral products,” has been the center of attention. On Monday, Lil Nas X and MSCHF released limited edition customized Nike Air Max 97s, which were decorated with a pentagram pendant and a reference to the Bible verse Luke 10:18 (which highlights Satan’s fall from heaven). They released 666 pairs at $1,018—which sold out almost instantly after being made available. The day before the drop, MSCHF confirmed that the shoes contained “a drop of human blood inside a sole,” which were allegedly drawn from members of their team. However, Nike wasn’t too happy about the “Satan Shoes”—and wanted to make it clear that they were in no way involved with the design. The company sued MSCHF for copyright infringement and argued in their lawsuit that Nike must maintain control over its brand by “setting the record straight” about which products can use its popular “swoosh” logo. MSCHF responded by defending their collab stating that “There is no better way to start a conversation about consumer culture than by participating in consumer culture.” As of Thursday, a judge ruled that MSCHF had to stop fulfilling orders of the sneakers. Prior to the ruling, Lil Nas X even got involved in the dispute by releasing a fake “apology video” on YouTube, which actually just cuts to the Satan lap dance scene in his music video. He took it a step further by tweeting a fake photo of Chick-Fil-A Bible verse sneakers. However, Nike’s swift lawsuit against the company prompted some users on social media to ask why they didn’t sue MSCHF for a pair of “Jesus Shoes,” allegedly filled with holy water from the Jordan River, that they released two years ago and worn by celebrities like Drake—and were reportedly “the most Googled shoe of 2019.” 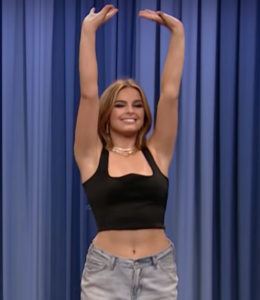 Last Friday night, TikTok influencer Addison Rae went on the The Tonight Show Starring Jimmy Fallon to promote her new song “Obsessed.” During a segment, Fallon asked her to perform some of the most popular dance trends on TikTok. However, after the video started circulating on the internet, it left a bad impression on many viewers, sparking major backlash for the show and Rae. Users on social media immediately started criticizing the segment, which did not credit the Black creators who actually invented the dance trends being showcased. The lack of credit “resurfaced frustrations” about how Black and BIPOC creators aren’t getting the proper recognition they deserve—and how oftentimes, it’s their white counterparts who benefit from recreating their work in mainstream settings. Many wondered and asked why the creators themselves hadn’t been invited on the show, with one Twitter user quipping “So I’m guessing all of the black creators who made these dances up were busy huh?” At least one of the creators whose dance was shown without credit, Mya Johnson, reacted to the clip saying “That should have been my time,” making headlines. Rae has responded to the backlash, tellingTMZ that while it was difficult to credit the creators during the filming of the segment, and emphasizing her admiration for the original choreographers. But not everyone accepted the idea that it would have been difficult to credit the creators, and in fact the Tonight Show clip has been edited to include the handle names of each of the choreographers. Last year, Charli D’Amelio received backlash for not initially crediting Black creator Jalaiah Harmon for her “Renegade” dance before apologizing, and eventually collaborating with her. Since the Black Lives Matter protests last summer, young consumers have been motivated to call out brands and influencers and push them to give credit to BIPOC artists and creators where proper credit is due, and there is a lesson in the Tonight Show/Addison Rae backlash for all brands: it matters where content comes from and who is creating it. Take the steps needed to make sure that you are accurately giving due to the people who are responsible for the work serving as your “inspiration”—whether it be artists, designers, choreographers, or influencers. But better yet, actually bring in (and pay) those individuals to give them the visibility they deserve. 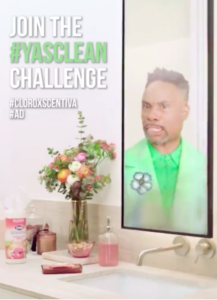 A new sponsored #YasClean hashtag challenge on TikTok has taken off. Clorox Scentiva enlisted actor and activist Billy Porter for an original musical track that flips the popular slang phrase “yas queen” in a challenge that asks users to show how they clean their homes using “the brand’s cleaning products in mind.” So far, the #YasClean hashtag has 4.1 billion views on the app, and the video featuring Porter’s video currently has 27.1 million views. As part of the campaign, Clorox teamed up with influencers Bonnie Lee, Beau & Matt, and James Henry to run a sweepstakes through the end of June where customers can enter for a chance to win $5K for a home makeover, $5K for a charity, and other 100 runner-up prizes. The campaign demonstrates brands’ continued interest in TikTok as a marketing platform, while showing how they’re more open to “integrat[ing] LGBTQ culture into a broad-based marketing effort”—and YPulse’s found that LGBTQ rights is one of the top social causes that young people are passionate about. Additionally, YPulse’s No Place Like Home trend report found that 77% of 13-39-year-olds have been cleaning and decluttering their home more than they used to because of quarantines, so as young consumers continue to spend time cooped up inside, it shouldn’t come as a surprise that they’re eager to participate in a challenge and contest that could potentially give them the chance to have their home cleaned up and made over. 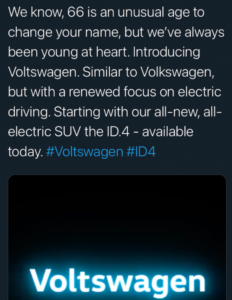 On Monday, news was leaked that Volkswagen was changing its name to “Voltswagen” as a way to emphasize their commitment to electric vehicles. Prior to the news leak, a mass email was allegedly sent out to reporters which eventually resulted in numerous articles reporting the name change in multiple reputable news outlets. In the process, their stock rose nearly 5%. But on the same day, the car company revealed that the name change was all part of an April Fools’ Day prank. But by that point, the marketing stunt left a “sour taste” in people’s mouths—and just made them even more confused. CNET indicated that “a fun stab at the “Voltswagen” name on April 1 could have been creative and fun,” but “lying to reporters on March 29 for a headline is another.” And according to the Associated Press, the fake press release could land Volkswagen “in trouble with U.S. securities regulators” after the stock raise. While most brands sat out April Fools’ Day last year, more participated this year and returned with “goofy antics” from Stryve’s beef jerky-scented soap to The Farmer Dog’s poop-inspired candle. An Affirm study found that more than half of Americans (54%) think April Fools’ Day should’ve been cancelled because there were too many surprises in 2020. However, T-Mobile took a different approach to April Fools’ Day this year with a #GiveThanksNotPranks hashtag on TikTok and other social platforms that asked users to, instead of playing a prank on their friends or family, thank someone who made a difference in their lives—and so far, it has 78.7 million views. The takeaway from this is that following a difficult year ravaged by the pandemic, brands seemingly need to think twice, and be more sensitive (and transparent) about the marketing they do around April Fools’ Day. 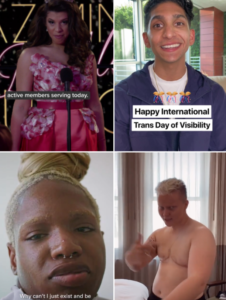 On Wednesday, TikTokers celebrated International Transgender Day of Visibility and show support for the trans community using the hashtag #TransVisibilityDay—which has racked up 121.7M views.

Young baseball fans are showing their excitement for the return of MLB with the hashtag #baseballisback, with 24.7M views and counting.

Following the global success of “drivers license,” Olivia Rodrigo has released her second single “deja vu,” and fans are flipping out over the lyrics.

The internet is hyped over the Zola trailer—the first movie based off a viral Twitter thread.

Sorry the Duke of Hastings fans, Netflix and Shondaland revealed that Regé-Jean Page will not be returning for season two of Bridgerton.

People are “dragging” influencers for their “barely-there masks.”

The internet had a lot of jokes and memes about the cargo ship that was stuck in the Suez Canal.

Lil Nas X’s New Music Video Is Racking Up Views & Praise on The Viral List
Lil Nas X takes a stripper pole to hell in his new music video, TikTokers can’t get eno...
Match.com’s Very 2020 Love Story Ad Is Getting Millions of Views on The Viral List
Taylor Swift, Ryan Reynolds, and Satan made this dating app's new add a hit, these Aeri...
Instagram Reels Is Here (In Time For a Looming TikTok Ban) on the Viral List
Trump just signed an executive order to ban TikTok, Instagram Reels is here and looking...